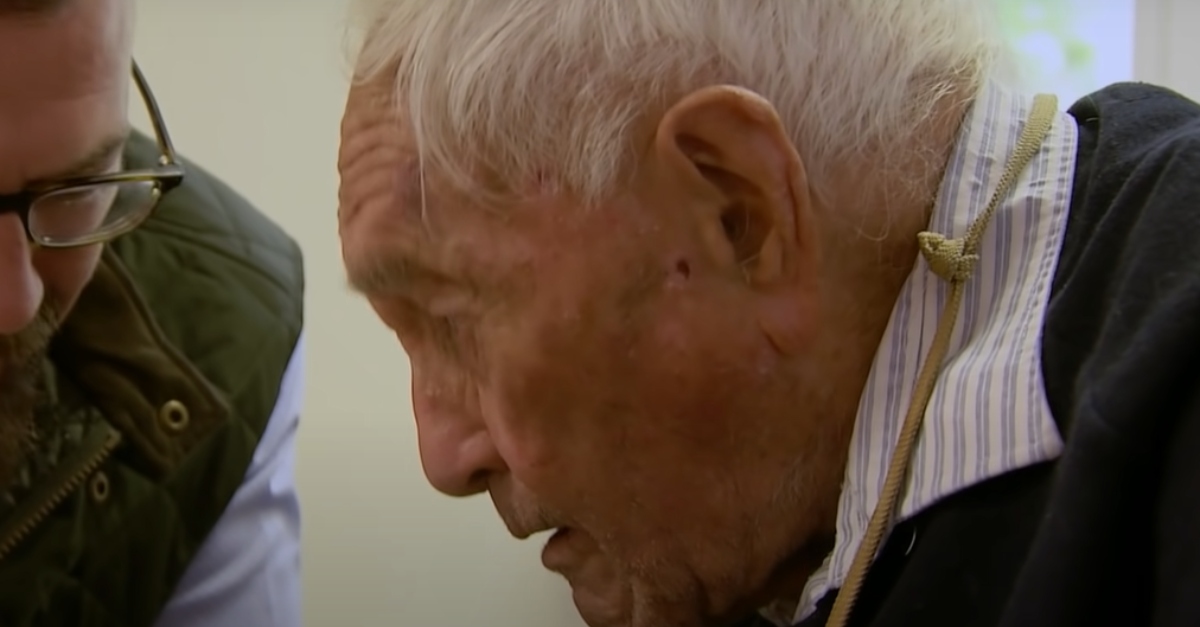 Everyone knows why Christmas is known as the best time of the year, every year it is celebrated by millions of families all around the world. Allan Jones was no stranger to the festive season, he loved it! That is, until the day that Christmas almost cost him his life. He knew that his health was slowly deteriorating, that was why he decided to seek medical help. Mr. Jones wanted to understand what was happening to him.

He couldn’t believe it when the doctor told him to get rid of his wife’s Christmas present.

Despite being 78, Mr. Jones and his wife were known to be a healthy and active couple. The two worked out on a daily basis and made sure they took all the supplements their body needed.

After their Christmas dinner with their children and grandchildren, Mr. Jones started experiencing symptoms that started by being subtle and insignificant and then elevated to ones that left him bedridden.

Mr. Jones was quick to call his doctor when he felt shortness of breath, knowing that this was something out of the ordinary for him. After doing several check-ups and tests, his doctor advised him to stay away from any possible allergens, including animals, smoke, and dust.

Mrs. Jones eliminated anything that could possibly be causing this bodily response, but the way her husband reacted made her even more concerned.

Rather than improving, Mr. Jones started experiencing heavy coughs that would not go away. Feeling desperate, Mrs. Jones reached out to her children for help. Her son then recommended making an appointment with one of his good friends that specialized in pulmonology.

Listening to their son’s advice, Mr. Jones booked an appointment for the next day with fingers crossed.

After the visit to Dr. Henry, Mr. Jones started with a course of medication that seemed to be making a difference. Feeling grateful, the couple invited him over for dinner at their home. Dr. Henry gracefully accepted the offer and visited the two on a Friday night.

Little did he know that this visit will be the answer to all the questions the couple had.

Henry and Mr. Jones chatted while they helped Mrs. Jones set the table. The three were having a great time discussing everything from the weather to their favorite meal. Half an hour into the dinner, the topic of Mr. Jones’s health was brought up.

One question floated around the dinner table, making the three feel helpless.

The three had one question that they could not quite answer. The reason behind Mr. Jones’s health issue was still unknown. Nothing made sense as they tried their best to understand where it all started, trying to draw a connection of some sort to make it all click.

The only thing that they were sure of was that the symptoms started after Christmas. Keeping that in mind, they inspected every single angle they could until they reached the category of presents.

One by one, they started investigating the presents that Mr. and Mrs. Jones received until they reached one specific present.

Henry made sure to pick apart every present until they reached the present Ms. Jones had gifted her husband. When explaining the present that she had made by hand for her husband, a light bulb went on in Henry’s head.

He then instantly directed Mrs. Jones to point him in the direction of the present.

Holding the sculpture Mrs. Jones made for her husband for Christmas, he focused on the little latch, opening it up to find remains of what looked like a natural ingredient. He directly asked her what the remains were.

The answer she gave caused Dr. Henry to blurt four words to the concerned couple “Throw it away now”.

Shocked by what she heard, Mrs. Jones asked for an explanation. Dr. Henry went on to explain that blue mussel, especially when ground, could cause heavy-metal poisoning after being exposed to it for a long time.

The two listened as Henry explained the endless effects of the exposure to ground blue mussel.

Gone With The Wind

The couple was quick to throw the gift away, learning about artists that have faced major health problems from mussel shells, for they act as the environment’s filter feeders. They accumulate toxins that are found in their surroundings.

Both Mr. and Mrs. Jones took several tests, making sure that the remnants of this shell had left their body and did not cause any further health complications. Thankfully, the two were not exposed to it long enough to cause irreversible damage.

Feeling disappointed by her finding, Mrs. Jones took it upon herself to take action.

The More You Know

Mrs. Jones took every step possible to raise awareness of the possible risk factors of the naturally found ingredients that people use in their day-to-day life. The more she learned, the more she shared, she wanted to make sure that no one would have to go through the health scare that they went through.

Mrs. Jones realized that stone and wood carvers, glassworkers, and many other art forms come with several health risks. Her story comes as a lesson to teach everyone to always do their research before using things that they don’t know much about.

But the story that struck a chord with Mrs. Jones the most was about a Canadian artist who was slowly poisoned by her own art.

Gillian Genser, a sculptor artist from Canada, had been working on a specific sculpture of Adam from the garden of Eden since 1998.

Nature and the current illian gillian genser environmental crisis inspired her and most of her artwork was represented in this way. But Gillian was oblivious to the fact that her own art was slowly poisoning her.

Gillian liked to use bones, shells and dried plants as a medium for her sculptures. For the sculpture of Adam, she specifically wanted to use blue mussel shells.

She had created a sculpture of Lillith before she began Adam – and it had been made entirely from eggshells. She only used natural, organic materials. Little did she know, it would be her undoing.

Gillian wanted to use blue mussel shells in her Adam sculpture because she noticed how they resembled human muscle fibers when they were polished.

She intended the sculpture to be her life’s work – her magnum opus. But, ironically, what had taken so many years to of her life to complete would ultimately be the end of hers.

Gillian’s Adam sculpture was made from the blue mussel shells she’d buy from Toronto’s Chinatown in bulk. She’d spend hours sculpting and grinding the mussel shells down into a fine powder, and then sanded them until they gleamed.

It took her fifteen years to finally finish the sculpture of Adam, however, she never anticipated that this piece would ultimately cause her death.

A few years into her art project, Gillian started feeling ill. She had constant headaches and nausea, but anything she did to try and relieve her symptoms only seemed to make them worse.

It all started with some minor aches and pains, but now it had escalated to sore bones and fatigue. At first, she dismissed her illness as stress. But it slowly got even worse.

Gillian was looking for any way to feel better while she continued working on her sculpture – which was nearly finished. She tried every vitamin available including, Vitamin B, Vitamin C, Zinc, Iron, and Vitamin E.

After taking them for a few weeks there was no notable improvement in the headaches, short-term memory loss, and crippling fatigue. She finally decided to go back to the doctor.

Back To the Doctor

Gillian got to the doctor’s office and they were shocked by her condition. What they had dismissed as a cold a few weeks earlier had now gotten far worse.

They were surprised that a woman with a healthy immune system like Gillian, who should have overcome the flu weeks ago, was still deteriorating. Now, they were growing concerned, too.

After seeing Gilian again, the doctor started to take her condition a little more seriously. He ran blood and allergy tests to hopefully find any disease or intolerance. But the tests came back with the same result: Gillian was perfectly healthy.

They didn’t have a diagnosis, but they decided to try an “elimination” approach, so Gillian was put on several different antibiotics. Hopefully, they would then find out what was really going on.

After Gillian was given the medication, they waited to see her reaction. This was their best hope of finding out why she wasn’t getting better. Most importantly, they needed to stop her from getting worse.

The medication the doctor gave her would hopefully give more insight into what was causing her illness, but instead, it had the opposite effect.

Gillian started to feel worse instead of better. She had body aches and could barely keep her eyes open. Then the mystery illness started to take a toll on her mental health. Her friends and family members started to worry.

Was the condition just a state of mind? Gillian couldn’t believe that. She knew her body and she knew something was wrong.

Gillian, determined to get to the bottom of her illness, searched for her symptoms online. She spoke to “experts” in online chats, and she tried herbal treatments and natural remedies, but nothing seemed to be helping.

As time went by, more and more people lost faith in her, and no one could give her answers. She had never felt so alone before. Maybe it really was just all in her head?

Gillian visited her doctor regularly over the next two years. Her doctor provided her with the best care and tested for everything that he could. She went to great lengths to attempt to diagnose Gillian.

She also visited psychiatrists, who put her on antipsychotics and antidepressants. But still, nothing helped. Gillian was convinced she was dying, but she needed to finish her sculpture of Adam.

In 2015, when Gillian had almost finished her Adam sculpture, she finally made a breakthrough. After seeing doctor after doctor, she finally saw a specialist.

The specialist performed a blood test and found extraordinary levels of lead and arsenic in her blood. When she learned the reason for the high levels, she was absolutely horrified.

A professor who specialized in invertebrates at the Royal Museum of Ontario was shocked when Gillian told him that she had been working with blue mussel shells in her sculpture for almost fifteen years.

“He told me, ‘People don’t realize how poisonous these things are,’” she said. So, ironically, Gillian had literally given her life for her art.

Mussels living in polluted waters accumulate lead and arsenic in their shells. Gillian had been touching and working with these toxic shells for more than a decade.

Even worse, she was breathing in the dust of the ground-up shells as she worked. The toxins entered her body and slowly damaged her nervous system.

Gillian eventually finished her sculpture of Adam, but her quality of life is now poor. Even though her art was poisoning her, she couldn’t leave her life’s work unfinished.

“When I look at Adam, I feel grief—both for myself and our planet. But I also feel satisfaction because he is magnificent. That’s how I find my hope. I call him my beautiful death.”