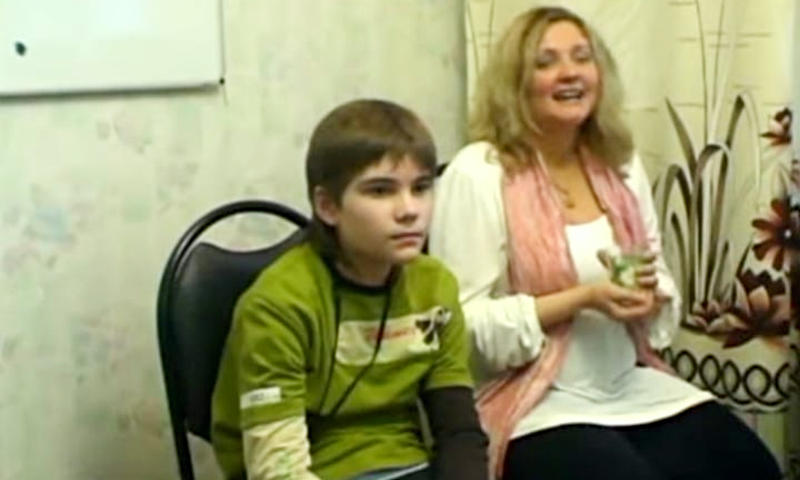 Ever since she welcomed him into the world she knew he was special. He could do things no one else could his age. She decided to look to experts to get to the bottom of things.

He spoke about space and they didn’t understand how he knew about the things he was saying. Researchers were astounded.

In 1996 Nadezhda Kipriyanovich welcomed her son Boris into the world in the town of Volzhsky, Russia. She could immediately tell that he was special.

“It all happened so fast, I did not even feel any pain,” Nadezhda said of the unusual birth. But even other than the weirdly easy labor, there was something else about her special child that she noticed.

“When they showed the baby to me, the boy was looking at me with a grown-up look,” She had no idea at the time but her son would give her a very strange and amazing explanation when he got older.

She was a pediatrician and knew a fair about children. But her son was nothing like others. The weirdness only kept happening when get him home.

Things only got stranger as little Boris spoke at just eight months old and would speak in short sentences while other children were still saying single words. He also never cried like other children his age.

But one and a half things got unbelievable. He could read and draw. People started calling him a little genius and researchers even agreed with them.

Even his teacher at kindergarten said that he had astounding memory, language, and writing skills.

His mother felt that he must have felt a little isolated “I had a very weird feeling that we were like aliens to him, with whom he was trying to establish contact,” she said. But she didn’t know all the facts.

As he grew older, Nadezhda decided it would be prudent to get him baptized. When young Boris walked past people, he would condemn them for their “sins”, warning them against drugs and adultery.

His drawings of people depicted a strange blue and purple aura around them, and Nadezhda started to wonder if he really could see inside their souls. Boris also had some ominous predictions about the future of the planet.

While being a shy boy, Boris wasn’t afraid to reveal his predictions for the future. In fact, he soon became a local celebrity in his hometown with tales of what was yet to come.

Boris claims the Earth is set to face a threat like no other in history, and the reason why was even harder for researchers to wrap their heads around.

Boris’ mother claims she never taught him a thing about astronomy, but Boris was able to wax lyrical about Mars, the solar system, and alien life.

“At first, I found it very frightening,” she said. “I thought that my son was out of mind, but then I decided to check if those names really existed. I took some books on astronomy and I was shocked to find out that the boy knew so much about this science.” Then he dropped a bombshell that defied logic.

When Boris explained how he knew all this, the story blew up. The youngster claimed that he was from Mars and that he had served as a pilot during a space civil war.

And when a Russian journalist sat down with Boris to confirm his claims, it was hard not to at least be captivated by the outlandish things he was saying.

“Did you really live on Mars as people say around here?” the journalist asked.

“Yes, I did. It is true,” Boris replied. “The Martians were waging wars all the time so I would often have to participate in air raids with a friend of mine. We could travel in time and space flying in round spaceships, but we would observe life on planet Earth on triangular aircraft.” And he had more to offer on the state of the planet right now.

“Is there life on Mars now?” the journalist asked.

Boris claimed his fellow Martians were wiped out in a nuclear war thousands of years ago, and the reason he came to Earth was to warn the planet of a similar fate. “But Martian people still live there under the ground. They breathe carbonic gas. They are very tall, taller than seven meters. They possess incredible qualities,” the boy added. But while science can’t confirm the claims, some were quick to label him an “Indigo Child.”

Boris says he is not the only child from Mars living on Earth, claiming they’re all on a mission to save our planet and stop the same thing happening here.

According to the young Russian, the children are allegedly reincarnated souls, which some theorists refer to as “Indigo Children” and possess supernatural abilities – like some of the fantastical things Boris recounted.

“Many Martians are immortal,” says Boris, despite the fact that they had been wiped out. “And don’t age past 35 years old.”

On top of all these claims by the boy genius, he also hinted that the key to the salvation of planet Earth lies in Egypt – and he was curiously specific about where it could be found.

According to Boris, the Great Pyramid of Giza hides a secret that will change the course of Eath once unlocked

“Human life will change when the Sphinx is opened. It has an opening mechanism somewhere behind the ear. I do not remember exactly,” claims Boris. And there’s at least one person who believes he’s telling the truth.

Nadezhda believes that Boris – now 21 – was telling the truth. “When we showed our boy to a variety of scientists, including ufologists, astronomers, and historians, all of them agreed that it would be impossible to make all those stories up,” she said.

Proof of the existence of alien life? A boy with a loose grasp on reality? Or simply a tall tale for attention?