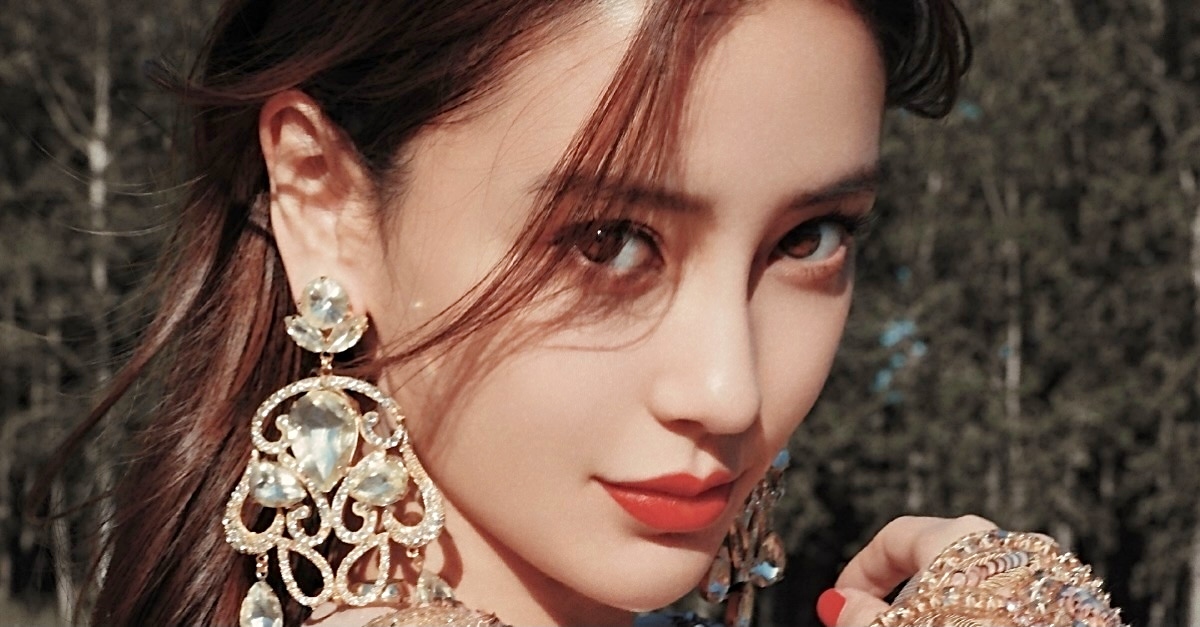 It’s quite a title to hold when you’re regarded as one of the most beautiful women in the world.  For this honor, she was accustomed to people paying close attention to her looks and scrutinizing her every move.

She was used to vicious rumors but being poked and examined was new. For the first time, she was forced to publicly defend herself as the authenticity of her livelihood was questioned. The gloves were off now.

Angela Yeung Chen is a Chinese actress with an army of fans around the world. However, when one looks at her face, it may be hard to tell that she’s also part German on her father’s side.

No one can complain about her rare ethnic background as it arguably produced one of the most beautiful faces around. While the bulk of her huge fan base is from China, Angela has an exotic beauty that is adored by millions worldwide. Now 33, she is known by a different name among her fans.

Angela has lived in Hong Kong most of her life. To her fans, she is known by the cute nickname, “Angelababy”. However, Angela isn’t just known for her looks. In her relatively short acting career, she’s already amassed over 40 film and television appearances.

When she’s not acting, Angelababy is also a renowned entrepreneur and is well-loved for her charity work. This is why when a nasty rumor threatened to derail her career, she felt compelled to do something.

In the beginning, fighting the rumor seemed like just a matter of pride. Things escalated quickly from there and Angela soon realized that the scandal threatened her livelihood.

Angela had worked hard to get where she was. It was becoming difficult having to face a constant barrage of bad press, nasty rumors, and cyberbullying she was being subjected to. Worst of all, people were saying she was a cheater.

As the owner of a fashion store in Hong Kong, Angela’s early experience with the glamor industry came from modeling the clothes her dad sold and acting was a logical step from there.

She was married in 2015 and had a child with her husband by 2017. Being a celebrity meant that rumors surrounding her personal life were never far behind either. Unfortunately, her family members were being dragged into it too.

Huang Xiaoming was also an actor and a celebrity in his own right. He was 12 years older than Angela and the pair were often accused of having a marriage of convenience to bolster their celebrity status.

The gossip only got worse as the years wore on and, at one stage, the couple were and were even rumored to have gotten a divorce. Things were becoming more callous but when Angela’s looks were placed in doubt, neither she nor Huang could have predicted the media firestorm that erupted.

It began years ago. A well-known beauty clinic in China started using Angela’s image for promotional purposes. Her career was taking off in a big way at the time.

Angela’s celebrity status brought a lot of success with it but also many unexpected mantles. She was also seen as an icon and role model to young girls everywhere. The clinic’s action began to damage the wholesome reputation that she had and was placing her credibility in jeopardy.

Things came to a boil when there were almost daily rumors and gossip mills were working overtime to tarnish her name.  Together with Huang, Angela turned to the Chinese courts for help. The matter itself soon began making headlines and some were calling it a complete farce.

As the court case progressed, the main issues that were identified all centered on Angela’s facial features. What happened after baffled many people as the court made an unusual order that Angela was forced to abide by.

When Angela filed papers, she never expected that it would result in her being summoned for medical testing. These invasive procedures included X-rays, being prodded, and even having facial probes. The fact that she had to submit to these things was not only embarrassing but also confirmed a sad truth for her.

The tests confirmed that the authenticity of her looks was really being questioned, in a legal sense no less. Her husband then made comments that unfortunately only fueled more speculation and gossip.

In Huang’s defense, he had tried to calm an already emotionally charged environment. Part of his comments confirmed that he felt Angela was indeed “quite ugly” at times. Without context, this certainly seemed harsh and unnecessary.

While no wife would probably ever want to hear such words spoken by her own husband, remarkably in this case, Huang’s comments were actually to Angela’s benefit.  The poking and prodding were finally done. So what was it all in aid of?

The matter began when a well-known beauty clinic used Angelababy’s image to insinuate that she had undergone plastic surgery with them. The implication meant that she was effectively on trial to prove that her famous beauty was natural.

If proven otherwise, the result meant being viewed as a fraud, disappointing millions of fans, and effectively “cheating” by exploiting seemingly perfect features that were actually surgically engineered to be that way. So what was the verdict?

After all the poking and prodding, the iconic actress’s face was medically proven to be completely natural. Vindication for Angela, Huang, and her army of fans was sweet.

She had finally put to bed years of nasty rumors that she cheated to get where she was and traded off fraudulent beauty standards. With this in mind, it’s now apparent why her husband referred to her as “ugly at times”

By Huang admitting that Angela had moments where she looked less than perfect, he was confirming that his wife had never had surgery.

She was just as susceptible as any non-surgically enhanced person to looking her worst without makeup, having bad hair and skin days, and being less than perfect sometimes. However, there was one thing that was never in doubt.

Regardless of how Angelababy came by her striking looks, not many people would disagree that she is a beauty of rare distinction. The fact that she’s also a talented actress, a successful businesswoman, and a philanthropist only enhances her allure.

After experiencing such a public fight to prove herself genuinely worthy of all the praise her beauty receives, it was her husband who said it best. He echoed sentiments that many of her fans already knew.

Huang Xiaoming continued to shower his wife with praise long after she was publicly vindicated. His comments were shared by many, if not all, of her fans worldwide.

While Angelababy’s beauty truly is stunning, she is so well-loved for more important attributes. Huang stated that he loves her warm, cute, and loving personality even more than her looks, proving the age-old adage that beauty is only skin deep.