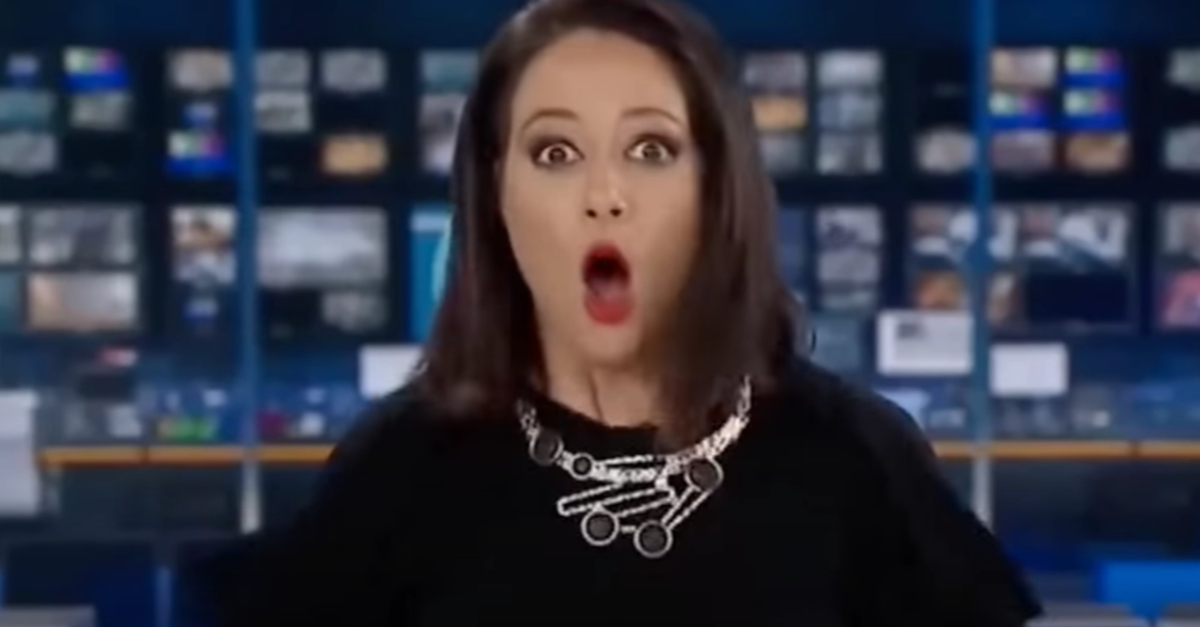 When something is being shot live, there is always risk involved that something could go a little wrong or catastrophically wrong.

From animals acting up to wardrobes malfunctioning, no one would have imagined that theses bloopers could have been caught on camera.

This reporter was leaning against a railing at a local skateboard park.

If you look at the audience behind him and then right behind his head, you’ll understand everyone’s reaction. A rogue skateboard went flying and knocked the reporter right in the back of his head – making him take a plunge to the pavement.

News isn’t just about what’s happening locally or in the world anymore.

It must be spiced up with something to keep the audience’s attention. People love animal showcases, but this little reptile did not want to be handled at all. The poor newscaster had no idea what to do … other than freak out and nearly drop it.

Normally, the news anchor is poised and ready for when the camera cuts back to them.

But this woman had a moment that all anchors have at least once – being oblivious that they are back on live tv. This woman was clearly bored and fiddling with her pen. When she realized what was going on, the look on her face was priceless.

It’s not just news bloopers that are hilarious – product features can have just as many booboos.

This man was trying to show that the foldable ladder was safe to climb on once it was clicked in place. As he climbed up, it started to unbuckle. But at the end of it all, he and his “foolproof” product were on the floor.

But apparently this Los Angeles weather girl was notorious for forgetting. Maybe it was to get attention, or maybe she was just careless. At least one time her coworkers had a jacket for her to borrow. But for the audience, it was all giggles.

You thought the last one was bad?

Well, this weather girl wore something VERY green. But that wasn’t what made it hilarious. Part of her report was a live clip in the background of a nice beach … where a nearly-naked man decided to start doing an embarrassing dance – the placement made it look like she was doing it.

Segways are hard – but this one was side-splitting.

The anchor mentioned that working from home might make it hard to know what day it was, but her co-worker “had the answer.” The camera pans to a very uninterested reporter who points at the large sign that says Monday. After, there is a long and uncomfortable pause – with him clearing showing he’s not going to say another work.

It’s rare to have everyone wearing practically the same outfit.

But this Australian anchor had a diva moment right on camera – she complained that the staff should have made sure, and she wasn’t going to go ahead until the special guest put on a jacket. She played on her phone, on live tv, until the “issue” was fixed.

A professional newscaster can power through anything. But they are still human … with phobias.

This woman wouldn’t handle the bugs that were swarming her. She fought against them while squealing with fear – not caring they were live and rolling. In this case, I don’t think anyone can blame her.

Clips and segments should always be in sync.

But this reporter mentioned the next clip, heard in his earpiece that the clip was missing, and then announced the next segment right away. His professional stance disappeared as the “missing” clip suddenly appeared. He threw his papers up in the air in annoyance.

You’ve Got To Be Kidding

Camera men spend a long time getting in place to get the perfect shot.

The crew thought they had the perfect spot to get a close up of a building that was being demolished. However, a coach bus suddenly pulled up right in front of them … and stopped right as the building came down. We can only imagine how angry everyone was.

This poor woman was already swamped with a pile of mics at her podium.

But right in the middle of her speech, another outlet plopped their own mic on the already huge pile – effectively blocking her face entirely. To her credit, she kept going like a pro. The camera man probably wanted to throttle someone.

The clips started out like any other news segment.

But suddenly a woman walked right into frame, oblivious of what she was standing in front of. She proceeded to yell at someone in a very funny voice. The reporter couldn’t help but laugh.

For non-golf lovers, the sport can be very boring.

The winner’s speeches aren’t much better. But during one post-game interview, a man decided to jump Infront of the camera and start making strange monkey noises. He was pulled out of frame quickly!

Meteorologist Jennifer Ketchmark was presenting her regular weather report on Fox59 when the producers switched to a field camera that overlooked central Indianapolis.

They switched to capture the scene but instead a rogue hornet attacked the camera lens and sent shivers down every viewer’s spine. Ketchmark screamed in terror and quickly fled the frame.

CNN news anchor Poppy Harlow was pregnant when she was live on air discussing the war against ISIS with CNN reporter Becky Anderson. Suddenly, her speech slowed and slurred.

Audiences could hear her breath grow heavy before she passed out. They immediately cut to commercial, leaving viewers stunned and concerned. Thankfully she was fine and appeared later to explain the faint.

Everybody has to work long hours sometimes, and it’s usually not a problem working tired. But when you’re in front of a camera, you better do your best to keep it together.

Unfortunately for Fox & Friends, Tucker Carlson didn’t hide his exhaustion too well and everyone saw it. Carlson fell asleep during the commercial break and his colleagues lovingly decided not to wake him up when they went live again.

Fox News anchor Kimberly Guilfoyle is known to be rather outspoken, even if she knows she’ll ruffle feathers. Such was the moment she spoke in a debate about the female constituency.

Unabashedly, she said that young women don’t have enough “life experience” to be informed voters and that they should just “go back on Tinder.” Wow! Way to talk about your own gender there Kimberly…

KTLA Meteorologist Liberte Chan was in the middle of her morning weather report when her producer’s hand appeared on screen, holding a sweater.

He told her to put it on. Live on-air she asked him why he replied that the station had been “getting a lot of emails.” Apparently, viewers considered her black dress inappropriate. She later apologized for offending anyone.

A Button On The Loose

Australian news presenter Samantha Armytage was overcome with a vicious sneeze during the commercial break. When they returned on air, she and her co-host’s arms were holding her waistline.

“Welcome back, we’ve got a wardrobe malfunction,” co-host David announced as Samantha squirms and the studio crew race to help her. Hilariously, her strong sneeze unbuckled her belt and led to a tense moment.

Weather Forecaster Jackie Guerrido of Puerto Rico has gained quite a fanbase for her habit of wearing clothes that seem a little unprofessional for her position.

She’s a former Dancing with the Stars contestant who was loved by the public. Her presentations with attention-grabbing outfits often turn into viral sensations throughout different social media platforms.

One of the greatest technical disasters that happened live on air was when WGN_Channel 9 lost their audio during filming for 19 whole minutes!

All but one reporter was completely inaudible during the segment – and the cameras kept rolling. Thinking fast to make the most of the moment, the anchors resorted to penned messages on dry-erase boards. Oh boy!

This Fox reporter was on location getting ready to go live on air when he was suddenly attacked by a large flying insect. He didn’t know the camera was rolling when he reacted hilariously dramatically.

After he finished screaming and flailing, he looked at the camera and asked “Was that live? We were live? Oh… brother.” The news anchors at the studio broke into a fit of laughter.

As you can imagine when recording live on air, it’s not always easy to predict what might happen – or when you might get a fit of giggles. But when you suffer a fit of giggles after segueing from a funny story to a tragic one, it suddenly becomes incredibly inappropriate.

This reporter couldn’t kick the giggles while reporting, “One protester has been killed and,” starts laughing quietly. “Ten people, including five children, have been killed after a building collapsed…”. She finally gave in to the fit of giggles, leaving viewers horrified.