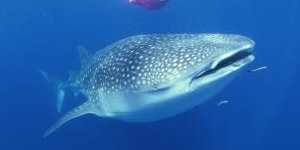 Admittedly, we don’t think about sharks unless I’ve just watched a “Jaws” marathon or hear about a shark attack from the news. However, it’s important to be up on your shark knowledge, especially if you’re an avid swimmer.

Contrary to their notorious reputations, not all sharks are dangerous. Although knowing this isn’t much of a comfort if you come face to face with one of the largest sharks swimming in the ocean today.

It appears we can feel safe again. Rounding out our list at no. 5 is the Pacific sleeper shark, which has the ability to grow up to 25 feet and as much as 800 pounds. Unlike many of the sharks on our list, the Pacific sleeper shark tends to reside in polar waters year around and spends most of its time in the deepest parts of the ocean, as deep as 6,500 feet below the ocean’s surface.

The Pacific sleeper shark feeds on various surface and bottom animals, including giant and colossal squid, sea lions, seals, octopus and various species of fish. As you can see, humans are not on the list. Thank goodness for small miracles.

Unfortunately, it looks like the threat level is increasing as we move further down our list. Coming in fourth is the tiger shark, named for the dark stripes that appear on its body during youth and gradually fade with age. Reaching lengths up to 25 feet and a weight of 2,000 pounds, this shark is known to be vicious and will attack humans without hesitation.

Unlike other sharks, this breed doesn’t have discriminating tastes so it will eat anything, including garbage, making its nickname “wastebasket of the sea” the perfect moniker.

Coming in third is perhaps the best known of the shark species, and not for good reason. The great white shark, forever immortalized by Steven Spielberg’s “Jaws,” is a predator. Although known to attack humans, it prefers other sea animals. Capable of growing up to 26 feet on average and a weight of 5,000 pounds, this shark is fast for its size.

This breed also tends to live near coastal areas, so it’s always a good idea to check for any shark alerts while playing or vacationing near these parts of the ocean, regardless of where you are in the world.

Well, we’re starting to feel a little safer. Coming in at no. 2 is the basking shark. Like the whale shark, it’s a friend to humans and enjoys their company. The Basking Shark can grow up to 40 feet and weigh up to 19 tons. It’s a filter feeder just like the whale shark and got its unique name because of its love to bask near the surface of the ocean in warmer months and feed. During the winter, you’ll find this shark in deeper waters.

We have some good news. The largest shark in the world loves humans, but not to eat. Although seeing the enormous Whale Shark traveling in your direction may cause you to forget this little detail and go into a panic attack. There are different reports on just how big this shark can get; however, most seem to fall in the 41 to 60 feet range.

What’s even more amazing is this shark can weigh upwards of 21 tons and has been known to live as long as 70 years. Despite its imposing size, this gentle giant is not a predator. It’s a slow-moving filter feeder, meaning its gills extract food from the water the animal takes in as it moves through the ocean. Whale Sharks are so laid back, they’ve even been known to let divers hitch a ride on their fins.