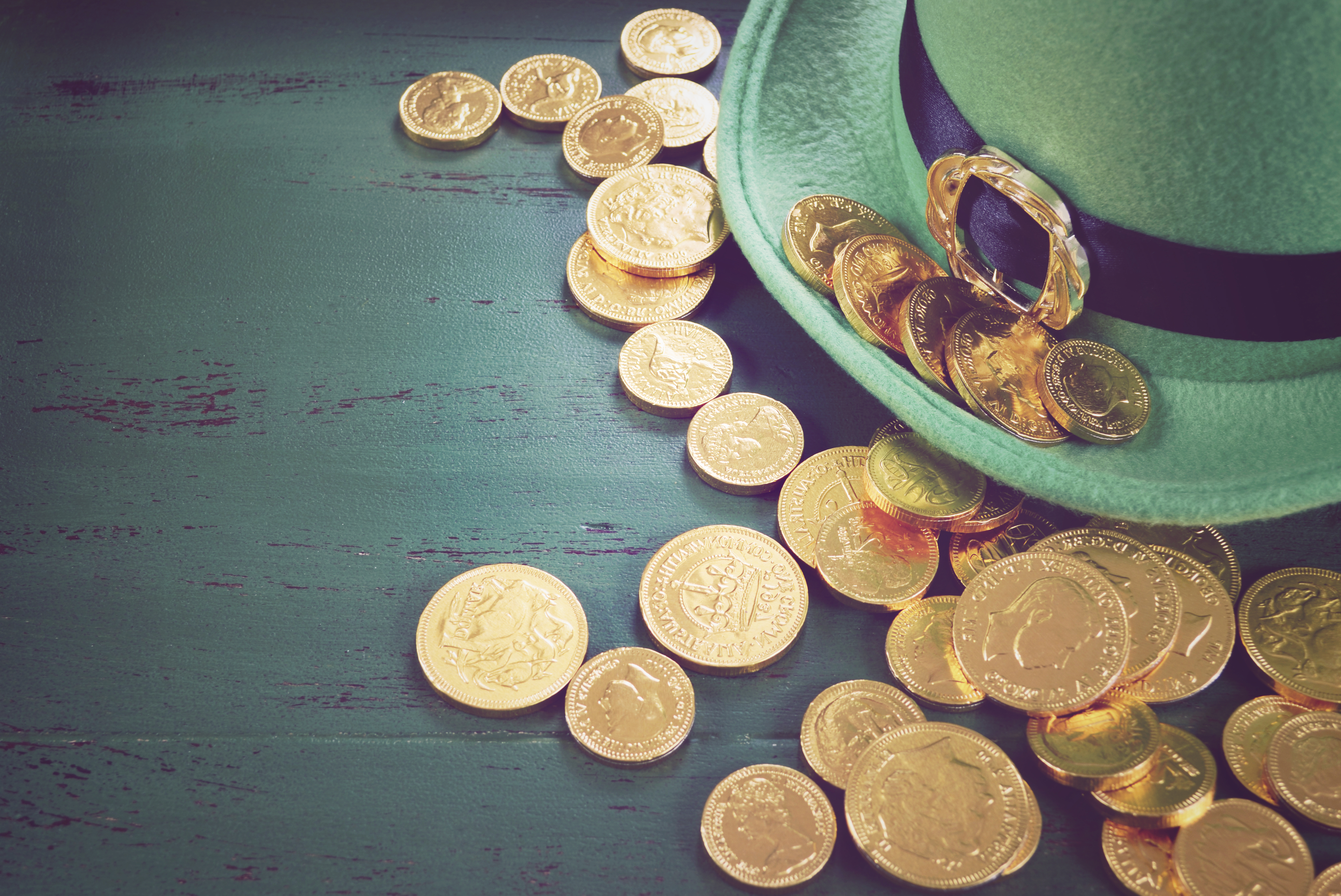 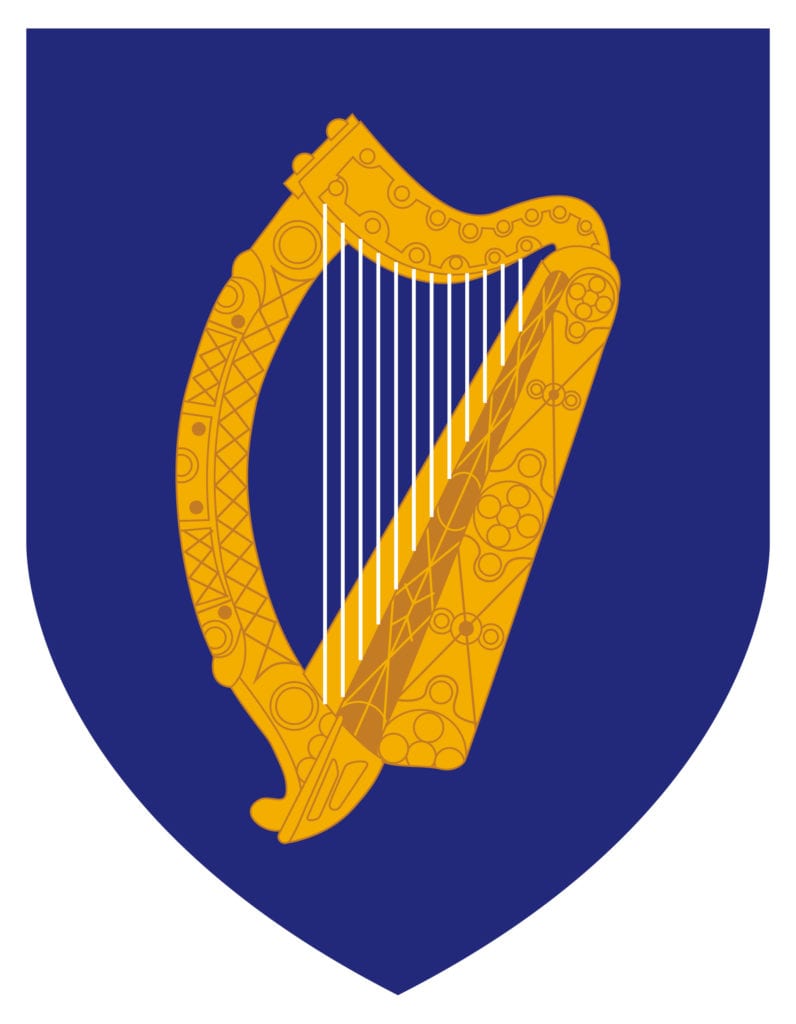 Blue was the the original color associated with St. Patrick and his holiday in Ireland.  The various shades of blue still used in the Irish coat of arms, and other patriotic Irish banners and symbols, are known as “St. Patrick’s blue.”  But, by the 18th century, Ireland had earned the nickname of “emerald isle” and the green shamrock became a symbol of St. Patrick’s Christian teachings.
Today, if you weren’t wearing green on St. Patrick’s day, your punishment was a fun but borderline painful pinch from your friends and family members until the clock struck midnight.  According to folklore, you get pinched on St. Patrick’s day for not wearing green because green makes you invisible to leprechauns, and leprechauns like to pinch people.  So if you go old school and wear St. Patrick Blue, the leprechauns are gonna get you. 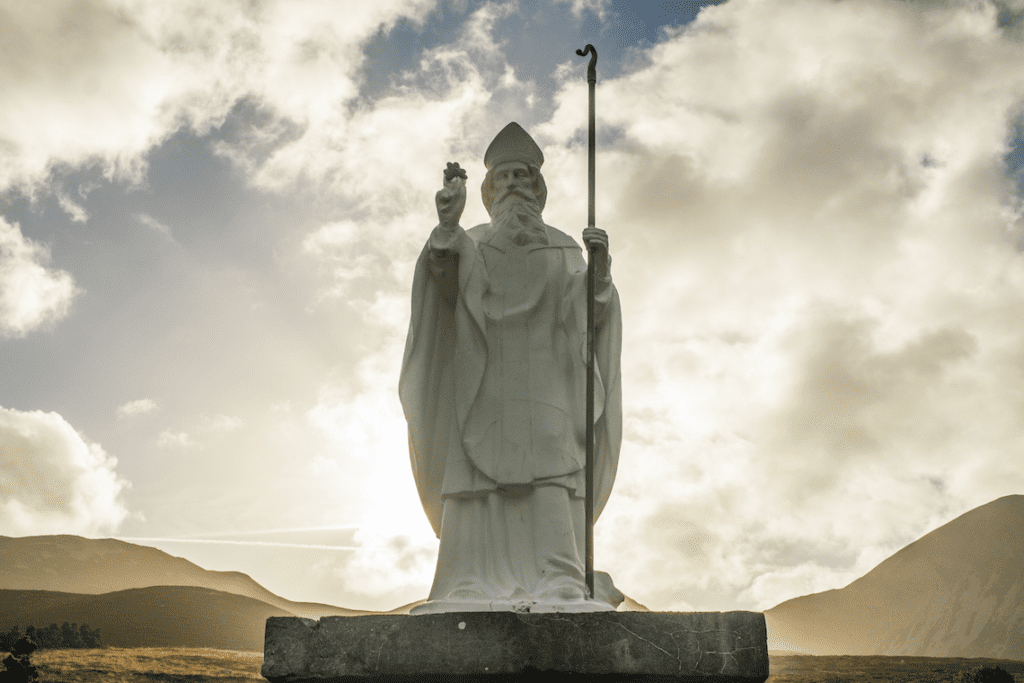 St. Patrick was a great man but some of your assumptions about him may be wrong.  He was not born in Ireland but it is believed he was born in Britannia in Scotland.  His parents were wealthy and considered themselves Romans.  His real name is believed to be Maewyn Succat and he took on the name Patrick upon becoming a priest.  When Patrick was 16 years old he was kidnapped and brought to Ireland where he worked as a shepherd.  He was there for 6 years before escaping back to Britannia.  Sixteen or so years later, Patrick returned to Ireland to convert the Irish.  He heard a voice that told him to convert the people of Ireland.
In Ireland, Patrick used the Celtic Cross, which he created, and the clover to explain the Holy Trinity and the Christian faith to the pagan Irish.  The greatest false myth of Saint Patrick was that he drove out all the snakes from the isle of Ireland.  They were never there, too cold.  But the myth started because he drove out the pagan religion from Ireland, and the evil it brought to the people.  The symbol of evil was and still is the serpent.  Hence Patrick drove out the evil/serpent from Ireland.
Eventually, the Irish immigrants to the United States evolved his feast day into a greater celebration including not only St. Patrick, but also Irish culture, history, and traditions. Though the feast day began in Ireland, the first St. Patrick’s Day parade began in the United States. The parade tradition became exceptionally popular in the 1840s and has not stopped. 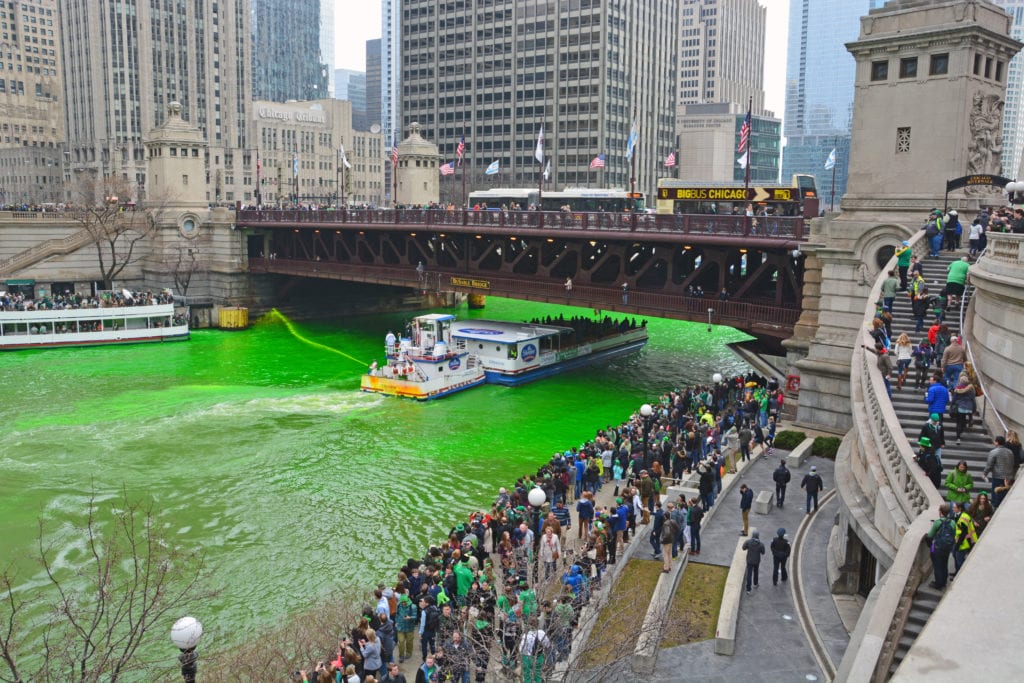 A river in Chicago is transformed into a bright shade of emerald green for several days in honor of St. Patrick’s Day. Every year on the eve of St. Patrick’s Day, a group of volunteers dispenses 40 pounds of dye from a small boat into the Chicago River.  Organizers say the dye is vegetable-based (it’s actually orange until it makes contact with the water).  The dyeing began in 1962.  Mayor Daley wanted to do something special for Saint Patricks Day.  A friend of Mayor Richard J. Daley,  Stephen Bailey, an officer of the local plumber’s union, had come to him with an intriguing idea in 1961. He had noticed a plumber’s overalls stained with a striking shade of green. The substance was a dye used to test for leaks in pipes. This was the lightbulb moment in which a great Chi-Town custom was conceived.
Tom Rowan worked on the police marine unit in charge of the department’s patrol boats. Daley gave Tom Sr. and his colleague Michael Butler the responsibility of dropping the dye into the river from their boats. They brought their teenage sons along to help, making it a family affair of Rowans and Butlers.  Since 1962, the dye crew has been done by the Rowans and Butlers. 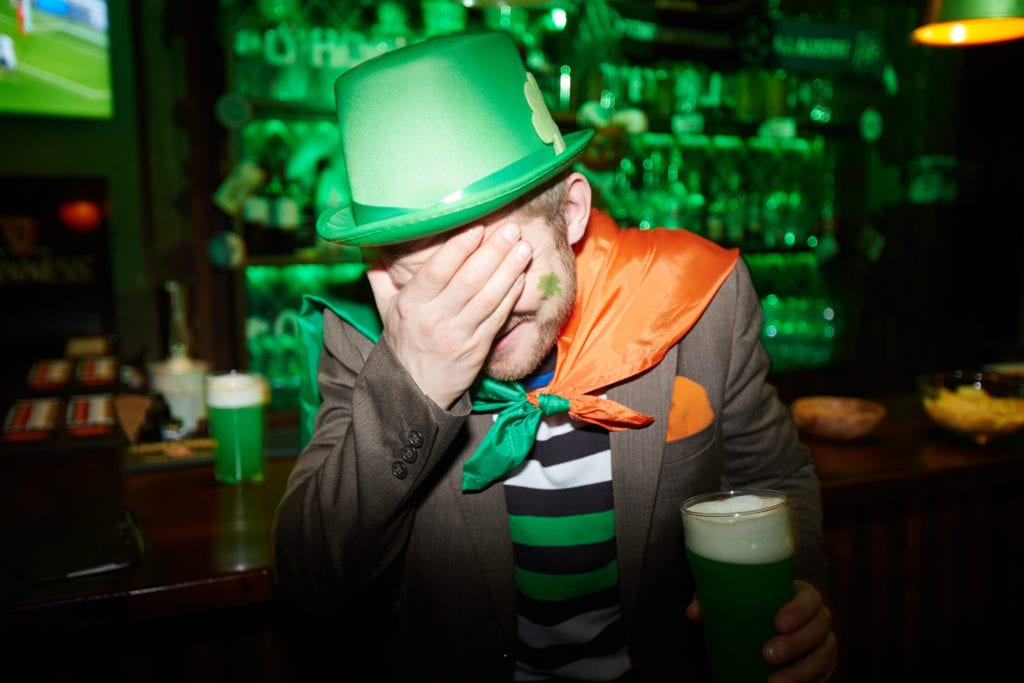 While St. Patrick’s Day evolved in the 20th century into a party day for Americans, the celebration in Ireland remained solemn. The Connaught Telegraph reported of Ireland’s commemorations on March 17, 1952: “St. Patrick’s Day was very much like any other day, only duller.” For decades, Irish laws prohibited pubs from opening on holy days such as March 17. Until 1961.  An Irish member of Parliament, James O’Mara, introduced the bill for the one-day holiday prohibition in 1906. , the only legal place to get a drink in the Irish capital on St. Patrick’s Day was the Royal Dublin Dog Show.

The Irish are now adopting St. Patrick’s Day traditions from Irish America such as corned beef and cabbage, which is not a main dish in Ireland.  The Irish in Ireland eat boiled bacon, but immigrants were too poor to afford the bacon, so they went for the corned beef. 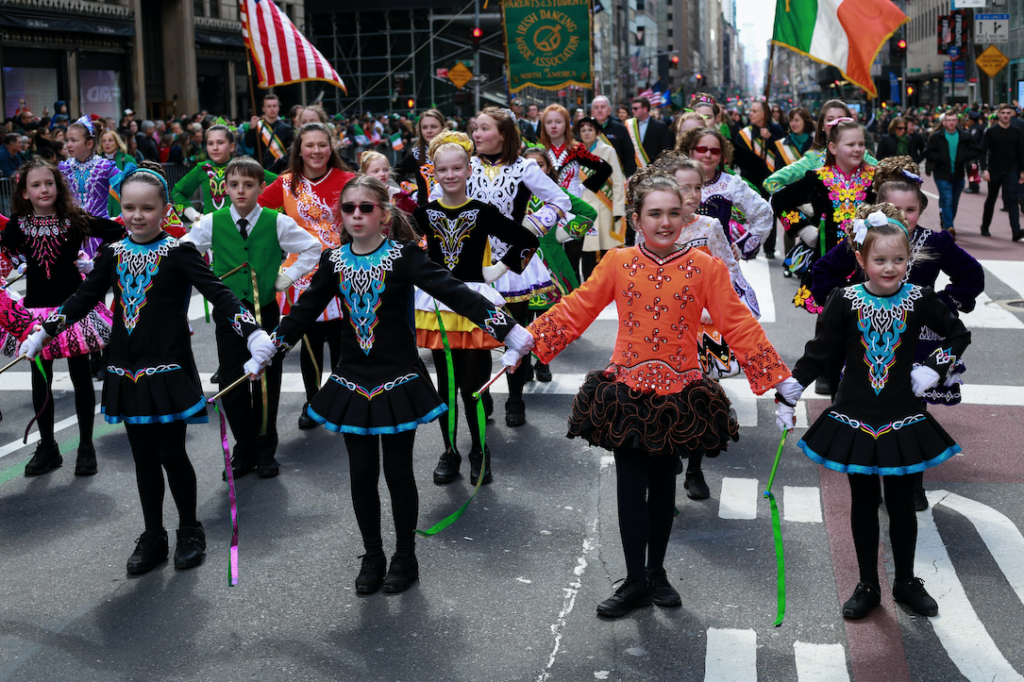 For more than 1,000 years, the Irish have been celebrating St. Patrick’s Day on March 17 in honor of the 5th-century patron saint of Ireland. But the first St. Patrick’s Day parade took place in North America, not in Ireland. In 1762, Irish soldiers serving in the British army marched through the streets of colonial New York City. The tradition of a raucous street parade on St. Patrick’s Day spread to more than 100 U.S. cities by the 21st century.
Today, the parade is one of the largest attended parades in the world.  The parade route goes up Fifth Avenue beginning at East 44th Street and ending at East 79th Street. Approximately 150,000 people march in the parade which draws about 2 million spectators.  Chicago also gets about 2 million at the St. Patrick’s Day parade.
Must Read
Renewed or Canceled: The Status and Budget of Every TV Show
Entitled Neighbor Keeps Using Her Yard, She Gets Spectacular Payback
St. Patrick's Day Quiz