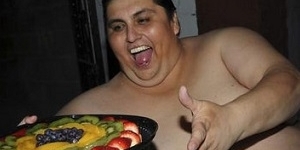 It seems these days that everyone is up and arms about all of the detrimental things humans have done to jeopardize our very existence. Between pollution, greenhouse gases, deforestation, wars, overpopulation, nuclear development, Miley Cyrus and whatever other unstoppable plagues you can think of, our long-term future on this planet is looking pretty bleak.

But if there’s a silver lining to all of this, it’s that we almost certainly won’t be around to see the end, because the obesity epidemic will have long since killed us all. That’s right world, it’s time to admit it—we’re REALLY fat.

And now, thanks to a recent UN study on “The State of Food and Agriculture,” we know exactly how fat we are, nation by nation.

The Outback had to make an appearance on this list; after all, they named their country after a steakhouse. Based on a cursory knowledge of their diet, it’s safe to assume the Aussies made the cut due mostly to their high intake of oversized Foster’s beer and bloomin’ onions. Whatever the case, Australia notched a 25.1 percent obesity rate, which begs the question; maybe the dingo wouldn’t have eaten your baby if it wasn’t so plump and delicious.

Middle Earth? Really? Turns out that even all that walking from the Shire to Mt. Doom couldn’t keep New Zealand off the list at number four, coming in strong with a 27 percent obesity rate. Though it makes sense, considering the often small, stout build of hobbits and dwarves, along with the fact that orcs will eat just about anything, including each other. So has the high volume of Lord of the Rings jokes given away the fact that we don’t know much of anything about actual New Zealand yet? Great. Moving on.

Well, would you look at this feisty little upstart? Not many would have expected this small European nation to land so high on the list, but look out, because thanks to a steady diet of dumplings, goulash, pork and cabbage, the Czech Republic has become the fat country equivalent to an underdog mid-major making a deep run in the NCAA Tournament. With 28.7 percent of adults facing obesity, you’ve got to admire the sheer tenacity of Czech eaters.

We’re number one! We’re number o—wait, what?! Yeah, here you thought the US was far and away the world’s fattest country and it turns out we come in at just number two with 31.8 percent of our adult population qualifying as obese. It’s the god damn economy, really. We’ll be back though, after all, this whole using donuts for sandwich bread thing is only just now starting to really catch on.