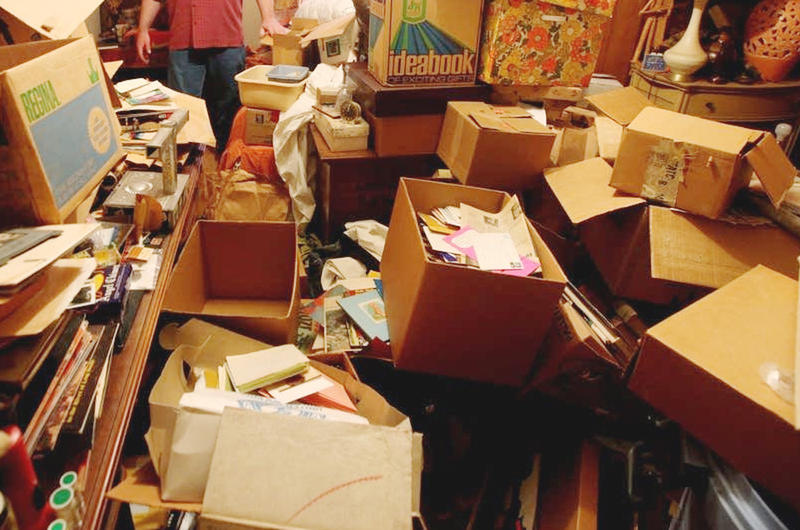 There was a room in the house that was never opened. The scent that emanated from underneath the door was enough to keep them all away.

As they grew up they still kept the door locked. Only after thirty years did they know it was time to take the plunge and step inside the room. Once inside, they stumbled on something that left their mouths wide open.

Leonel Almeida was the head of the Almeida family in Brazil. Leonel spent his free time collecting broken furniture and other stuff people thought was junk. To Leonel, these items were perfectly good and he could fix them.

Over the years the family just got used to it. The small amount of clutter turned to a mountain of junk over time. The junk would even cover entire rooms.

He’d go out and find stuff and bring it back home to add it to his collection of other items. They accumulated over time to become a junk overload.

There was even a spare room that the family had slowly turned into a storage space for Leonel’s junk. The neat stacks didn’t last long as they turned into overflowing piles. That’s when the scent became apparent and no one wanted to go near the room now. Leonel then brought something else home.

Lenita, Leonel’s daughter, was ready for another awful present. She closed her eyes and felt something warm in her hand. When she opened her eyes she couldn’t believe what was in her hand.

Leonel had gotten his daughter a tortoise. Lenita was ecstatic and named it Manuela. The tortoise became part of the family, but she was unaware that it wouldn’t be for long.

Where the family lives tortoises are common pets. They’re easy to take care of and don’t often manage to run away.

But only after a few days of having their new pet did they suddenly vanish. With their house still being under construction it was hard to determine where’d she had gone.

They searched everywhere they could. They checked the garden, out by the fence, and even on the pavement. But their pet had just disappeared.

They looked in every hideaway that they thought the tortoise might have gone to. They just hoped that their pet was near some water and away from the sun. The tortoise was still a baby and they wanted it to be safe.

As each day passed without Manuela appearing, they soon lost hope and moved on with their lives.

Many years passed as the family pushed the memory of their tortoise into the back of their mind. Only after Leonel passed away did the tortoise come back to their memory.

The siblings, now adults, had the job of getting rid of the junk in Leonel’s old storage room – the room they hadn’t dared go into in years.

They slowly opened the door and the smell of rot hit them. They couldn’t save anything so they decided to dump it all on the curb to be picked up by trash collectors.

Their neighbor noticed the pile of boxes accumulating on the sidewalk and started eyeing them. He asked the siblings if he could look through some of it.

The neighbor rummaged through the boxes searching for any treasures. It was after opening one particular box that he had a confused look on his face and said: “You’re not throwing out that as well, are you?”

Leonel’s son, Leandro, looked inside the box and saw something that made his eyes grow wide in disbelief. There was something special amongst all the junk.

Leandro first assumed the neighbor was talking about some old antique he couldn’t care any less about. But he couldn’t believe what had been inside this box for so long. Were his eyes playing a trick on him?

“What?” He leaned closer into the box and his jaw came unhinged. There was Manuela … very much alive.

“That’s not possible!” he thought, turning white and then called out to the rest of the family. Everyone stood in a circle, eyes wide and at a loss for words. How in the world did it survive?

The tortoise was immediately rushed to the vet. It probably needed medical attention.

They also needed answers. It had been thirty years! When the vet heard the story, he was also amazed, but not nearly as surprised. He went on to explain the amazing facts about the species.

While most tortoises are impressive survivalists, the red-footed family is extra resilient.

They like to eat fruit and leaves but can also subsist on expired animals or droppings. If necessary, they can go for two or three years with no food. The father’s stash also ended up a key element in Manuela’s existence.

The vet suspected that the furniture he brought home had termites and other bugs.

The tortoise could eat away at them as they repopulated. It could also lick away at any condensation that came from the extra humid room. That didn’t mean everything was okay in the health department. The time in storage was still far too long.

Anthony Pilny, a veterinary surgeon and specialist in birds and reptiles at the Center for Avian and Exotic Medicine in New York City, also had some answers for the family.

He explained that most reptiles have reserve fat pads that they can draw on when food is scarce. But, he also pointed out that reintroducing Manuela to the world might prove to be a challenge.

“They should go very slowly – start by warming her up and rehydrating Manuela before feeding … Give her warm water soaks and offer a small meal after she seems stable,” Pilny advised.

“Then take her to a veterinarian who specializes in reptiles for a checkup and some bloodwork.” But it’s not the first time Pilny has seen something like this happen.

One day, Pilny’s own red-eared slider water turtle vanished from his tank: “I looked everywhere, turned my apartment upside down, but to no avail. About three months later I was packing to move, and while cleaning out my bedroom closet, found him in a shoe buried in the back of the closet,” he said.

“He wasn’t responsive or moving, but didn’t look dead, so I dropped him in the tank. Nothing happened for a few minutes as he sank, but then he suddenly came alive and acted as if nothing had ever happened.”

Not Out Of The Woods

“We’re all thrilled to have Manuela back,” Lenita said. “But no one can understand how she managed to survive for 30 years in there—it’s just unbelievable.”

Their vet, Jeferson Pires, was equally astounded. A tortoise surviving in an attic without food must be some kind of record! But even though she’d survived her 30-year ordeal, she wasn’t quite out of the woods yet.

For Manuela to be rehabilitated, the family would need to follow a detailed plan to reintroduce better food and water.

And they would have to do it very slowly. After, they could give it a proper home in their garden. In a strange way, their father was the one to thank. How about now?

The Almeida family has another thirty years to enjoy with their old friend. Yes, these are not pets to take on lightly.

They might be “easy”, but they are still a long commitment. This is because the pet versions cannot be released into the wild. They will be with you for a long time.