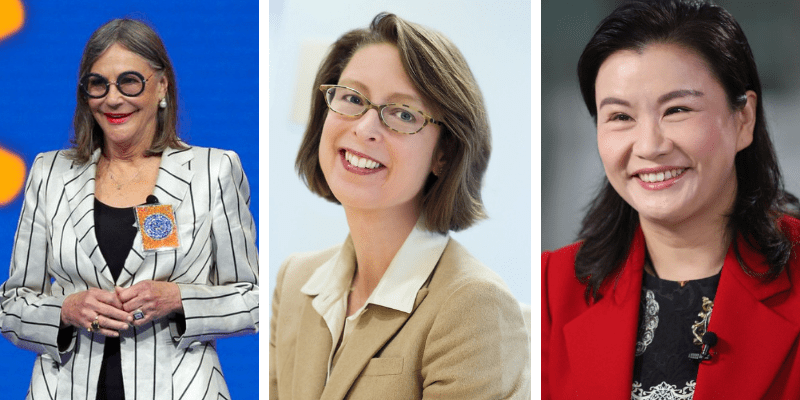 The three-comma club’s members have had yet another wildly wealth engrossing year, and its richest women are no exception.

Whether they are pioneers in their industries, trailblazers or heiresses of family dynasties, these 18 women were listed at the top of Forbes Billionaires list in 2018. Read on to discover who they are and how they made their fortunes!

Carrie Perrodo inherited the international oil company Perenco after her husband passed away in 2006.

Perenco is one of the largest family-owned oil companies in the world, operating in many countries including Vietnam, Gabon, Peru and more.

Does the name Walton ring a bell? How about the name “Walmart”? You guessed it, Christy Walton is part of the big Walmart’s Walton clan.

She married into the family and inherited one-sixth of the fortune of her late-husband John Walton when he died in 2005.

Pauline MacMillan Keinath is one of the richest women in the world after she became the largest shareholder of Cargill, the largest food company.

What does it mean to be the biggest shareholder of the largest food company in the world? It means that you make your way to the top of the list of richest women in the world. Pauline MacMillan Keinath supposedly has an estimated 12% of Cargill, a large corporation that was founded in 1865 by her great-grandfather.

Wu Yajun is a trailblazer businesswoman who turned her life upside down when she decided to quit her career in journalism and start a real estate business with her now ex-husband in 1993.

She is now co-founder and chairperson of Longfor Properties, a Hong-Kong-listed real estate developer.

Zhou Qunfei has a rags-to-riches story, and it’s absolutely inspiring.

She went from being a migrant factory worker in Shenzhen as a teenager to chairing Lens Technology, a giant smartphone screen supplier. With clients like Samsung, LG, Nokia, Microsoft and even Tesla, she earned her place on the world’s richest women list.

The story of Massimiliana Landini Aleotti’s wealth story starts when her late husband, Alberto Aleotti, starts working at Meraniri in 1964. In the late 1990s, he bought the company and started transforming it into one of Italy’s biggest pharmaceutical companies.

When he passed away in 2014, Massimiliana and her three children inherited the company.

Margaretta Taylor has approximately a 17% stake in Cox Entreprises, a family-owned and -operated conglomerate.

The media and automotive giant was founded by her grandfather in 1898 and is now owned by his grandchildren. Margaretta’s son is the president and CEO of the company.

Katharine Rayner is also one of Cox Entreprises’ stakeholders alongside her sister Margaretta Taylor.

She also inherited her fortune from her mother, Anne Cox Chambers.

Savitri Jindal is the chairwoman of Jindal Group, founded by her late husband Om Prakash Jindal.

After his death in a helicopter crash in 2005, his wife and four sons inherited his fortune. The group’s companies were divided among his children.

With a hefty 23% controlling stake in Heineken, Charlene de Carvalho-Heineken became one of the richest women in the world after her father passed away in 2002.

The CEO now owns 24.5% of the stakes of the company and shook things up by suggesting new products and shifting away from old segments.

Australia’s richest woman (and citizen) is Gina Rinehart. She is the daughter of iron-ore explorer Lang Hancock.

When he went bankrupt, Gina took his estate and rebuilt it, Phoenix-style.

When you have stakes at both Apple and Disney, you have a guaranteed spot on the world’s richest women list.

This is the case for Laurene Powell Jobs, Steve Jobs’s widow. She is now the founder and president of Emerson Collective, a for-profit social impact firm.

Wealth is a family matter in the Huiyan household. Yang’s father transferred her stakes of the real estate developer Country Garden Holdings, giving her a total of 57% in stakes.

Her sister is also on the board of the company, and her aunt was on the 2017 Forbes China Rich List.

Mars might be one of your favorite candies, but did you know that the co-owner of the candy-making company that produces it is one of the richest women in the world?

Jacqueline Mars owns the third of the Mars company, all while serving on six boards of philanthropic institutions (including the National Archives and the Smithsonian).

The richest woman in Germany is no other than Susanne Klatten, the daughter of industrialist Herbert Quandt, who transformed BMW into a staple in the luxury market.

She now owns 19.2% of the automaker company.

The case of the Bettencourt Meyers family is a fabulous case of dynasties that involve family and opulent wealth.

Bettencourt Meyers was the founder of the now-giant personal care company L’Oreal. After she and her daughter passed away, the family stocks were inherited by the heiress Françoise Bettencourt Mayers, who now owns 33% of the company’s stocks.

Alice Walton is the only daughter of Sam Walton, Walmart’s founder. She moved up one spot in the richest women list after a 43% uptick in the value of Walmart’s shares.

Unlike her siblings, she was more interested in curating art than working in the family business. Now, she is the chairwoman of the Crystal Bridges Museum of American Art.

The life and rise to power of each one of these incredibly successful and wealthy women are fascinating. Women have been shaking things up more often and with more resounding success. To discover more trailblazer figures who have been changing our world, hop on to the next article.