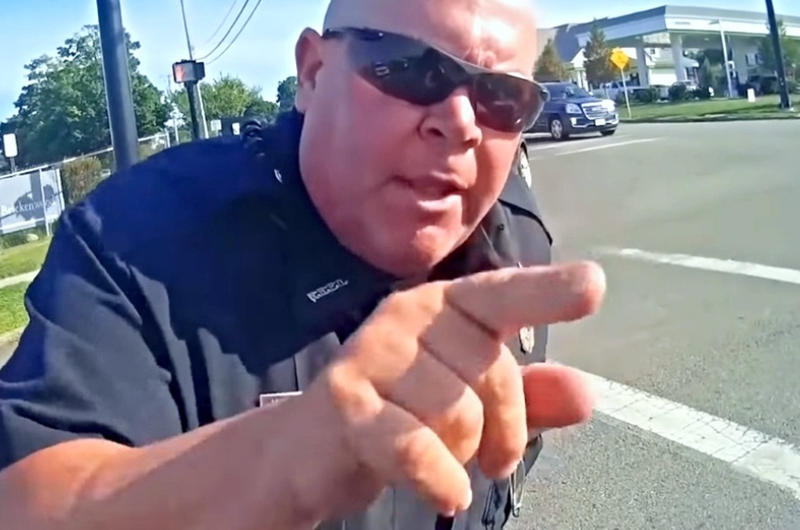 They ran back and forth making sure that they had the proper tools for the job. They were just looking out for everyone’s safety.

The brilliant blue and red of police cars flashed onlookers who drove past. Their sight, however, wasn’t fixated on the accident. It was on the sight of the two emergency services arguing with each other.

The road was already as narrow as it was. But now it had five police cars and an ambulance, not to mention all the traffic trying to get past.

There were two EMTs on the scene. One was trying to stabilize someone injured in the accident, while the other was looking at the cop cars in disdain. The cruisers were blocking them in.

With his partner already placing the injured on a stretcher, Troy ran up to the sergeant on the scene to ask his buddies to move their cruisers.

The cop glanced over at the EMT. He had a look on his face that would curdle milk. Finally, after muttering something under his breath he told the other officer to move their car. This was something they flat out ignored.

Troy was so surprised he even took a step back. Would this guy really block on an ambulance and refuse to move it? The sergeant wasn’t impressed by his subordinate and made a beeline for the cruiser.

The door to the cruiser was locked. Troy was getting impatient, he told them: “We really need to get out now.” He could see his partner was ready in the ambulance waiting for the car to be moved.

Troy felt his patience wearing thin and his temper rising.

EMTs were trained to stay calm in the worst situations, but this situation wasn’t something he’d ever trained for. The Police were supposed to be there to help them with their job, not hinder them. He thought that maybe they could try pushing the thing, or smashing its windows. Just then, Troy noticed a tow truck on the other side of the street.

Get Out Of The Way

Troy could see the man sitting in the cab of his truck, drinking some water. Maybe he could help them? Troy thought.

After the sergeant saw what Troy’s idea was he ran to the tow truck and asked the driver if he could help. The driver said that he was called as an extra anyway. They asked him to get the cruiser off the road immediately.

“What’s your drop rate?” Troy asked the driver. He named his price and the sergeant couldn’t help but grin.

Troy also started smiling when he looked at the sergeant. But they had work to do, so Troy rushed back to the ambulance and explained everything to his partner. Then they watched what came next.

They watched the tow-truck do its job as the driver hooked the cable over the hard-point and turned the lever in his cab.

They heard the motor start-up, it was a loud drone as the cruiser’s front wheels lifted off the tarmac. Then the truck driver towed it to the grass on the side of the road. They could then see the cop who the cruiser belonged to run to the cab and tell the driver what he thought of the situation.

Troy heard the rest of what unfolded after they left through the sergeant. From what he was told, the young cop wasn’t impressed, to say the least.

The cop’s face was red with anger and he reprimanded the cab driver, telling him to put his cruiser down immediately. The tow driver stared at him and just shook his head.

The cab driver opened his mouth and said “My drop rate is one-hundred dollars.”

“Are you crazy?! Sarg, you’re not going to let him do this, yeah?!” The cop stammered looking from the tow-truck driver to the sergeant. The sergeant just looked at him and said “It’s legal to move any vehicles that block emergency services.” The rookie cop wouldn’t let that discourage him from trying to get his car back.

The scruffy driver leaned against the truck and shook his head. “Nope. Drop fee is a hundred.” “Fifty.” “A hundred. It will be more if I pull it away.” The headstrong man let out an angry, but defeated, sigh and pulled out his wallet.

He peeled off four 20s from his fold and shoved it in the driver’s hand.

When the tires hit the ground and the hook came off, the young man jumped in his car and squealed away, still boiling with anger. The Sargent finally relaxed and let out a long, hard laugh. Apparently this lesson had been long-coming.

Apparently, the new guy had only been on the job for a couple of weeks.

He was like most rookies – an inflated sense of ego and cock-of-the-walk attitude with everyone. This guy was a bit worse and acted like he ran the place. There was also another hilarious thing that was kept a secret.

The grounds (and “law”) they had used for moving the car were actually false.

There was no law at all. The young, cocky buck didn’t need to spend a hundred. However, as far as his boss was concerned, it was worth the lesson that cops are not exempt from the rules. As for Troy…

They were able to get to the hospital and the injured people in the accident got the care they needed.

He and his partner also got a good, long laugh. It let out the day’s stress and reminded them everyone was one big team, even the people you don’t expect.

Troy was so amused by what had happened that he felt compelled to share it on Reddit — on a thread titled “Petty Revenge.”

Somehow, the stars had aligned to take the cocky cop down a peg. And readers loved it. The post has since racked up hundreds of comments. Most Redditors couldn’t believe the audacity of the rookie cop and were amused, too. Some shared similar stories of their own.

A user who goes by the name of “hammerraptor” wrote: “Worked for the local FD a few years back as FF/ EMT. Worked a car accident. We parked the ambulance and truck near the scene. Rookie cop decided didn’t like where the ambulance was parked.”

“Decided to get in and move the ambulance about 150- 200 ft away from the scene out of traffic. Any extra equipment we may have needed and emergency transport that may have been necessary were now minutes away.”

“The chief (55yr female) went to fisticuffs with the cop. Just irate. Had to pull her off the cop. Had the police chief on the scene in 5 minutes. Screaming match ensued for about 20 minutes about the PD not interfering with our operations,” he continued.

“The accident victim was fine and we were cleared off the scene rather quickly. The PD nicely decided to buy the fire department dinner that night. The chief was not reprimanded, and became a good story across the dept.”

And then, another user wrote about another experience about an incident involving firefighters and cops coming to blows.

“When I was a volunteer firefighter for several years, I was trained and cleared to operate all of the department’s apparatuses,” he wrote. “One night we are dispatched to an accident on the nearby interstate. I was operating our 2nd engine as the first was already on a call…”

The 3 vehicles involved in the accident blocked the left shoulder and the left of 4 main lanes. As protocol to protect the victims and crew, I placed the engine blocking the 2 left lanes. We don’t move until we are finished with scene.

“We haven’t even attended to all of the victims and a trooper comes up telling me that I need to reposition the engine so that he could open up a 3rd lane of traffic. I explained that I needed to protect the victims and my crew until we leave…”

“That part of the conversation goes back and for a few times until I walked away to assist at the scene. The trooper comes back to me about a minute later raising he voice demanding I move the engine,” he continued.

“I pointed out that we had equipment spread out in the lanes and we needed the space to work in. He walked over to one of medic crew asking who was the ranking officer on the scene. Two firefighters stood up and pointed at me.”

A Lot To Deal With

“The look on the trooper’s face was priceless. As the trooper walked by me he stated that he WILL be addressing this later. A few minutes later a rescue chief, and friend of mine, was on the scene and I explained my situation. He smiled and said that he would take care of it. The trooper left me alone that night.”

More Common Than You May Think

Although ambulances have right of way in almost all situations — after all, they’re saving lives –you’d be surprised by how many threatening letters EMS crews get.

In fact, The West Midlands ambulance service said it experienced at least one incident of abuse against its staff per day on average.

“If you genuinely need to leave your house urgently and we are blocking your access, please come and knock on the door where the emergency is taking place,” Lee Brentnall, Paramedic and Ambulance Operations Manager, pleads.

“Sometimes we will be able to move the vehicle, for example, if we are treating a patient but they do not need both of us there at the time,” Lee continued. “However, there will be times that we are treating someone experiencing a life-threatening and time-critical emergency and moving our ambulance will not be our priority… you will need to be patient as we try to save someone’s life.”