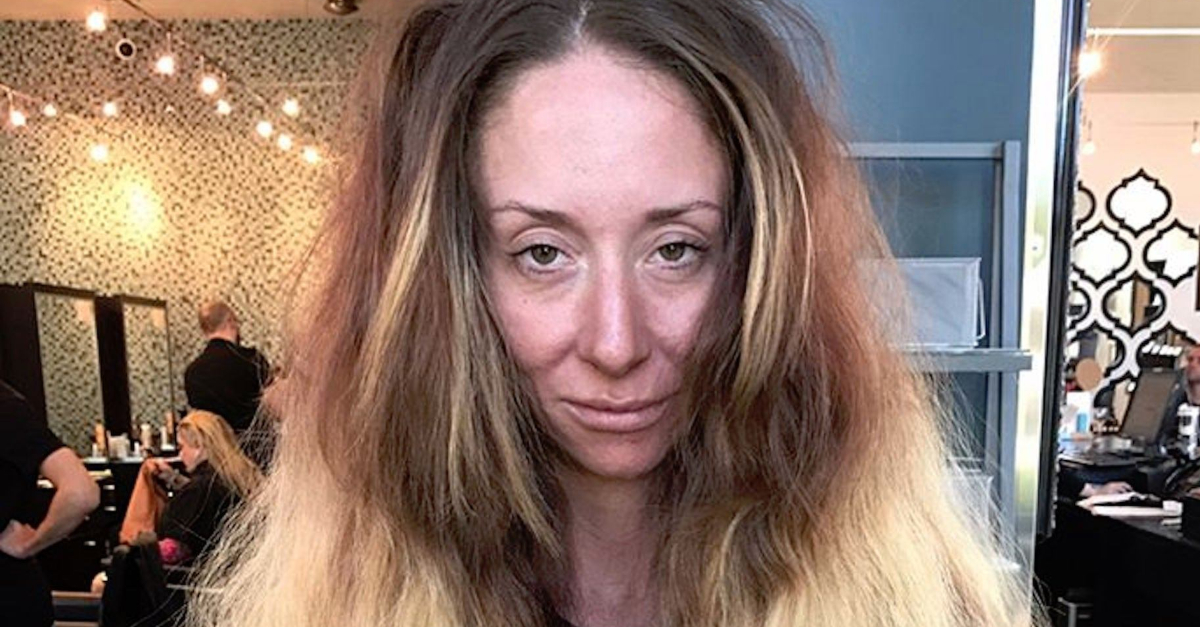 What do you do when your life feels like it’s been turned completely upside down and you’re longing for a new beginning? Getting a new haircut is a method for most people to reclaim control of their lives, increase their confidence, and prepare to face the world once more.

This was not the case for one Florida woman. Her beautiful waist-length hair remained uncut for 30 years.  She had no idea what was about to happen to her life…

For as long as she remembered, Holly Garrido had always had the longest hair out of everyone she knew. Every morning, she went through the grueling routine of trying to tame her unruly mane. She’d brush it out, twist it up, and plait it away from her face.

Then, she’d put on her work uniform and head off to her job. Holly never thought about the way she looked – her job required function and utility, and that’s how she viewed her appearance as well.

Holly’s Rapunzel-like locks had become a huge part of her identity – after all, that’s how everyone around her knew her. She was “Holly with the long hair.”

Her hair was a part of her persona, even the thought of cutting it would be like losing a huge part of herself. But with her wedding day looming, of course, everyone was curious about how she was going to style it.

One morning in 2017, Holly made the decision. She had been busy planning every aspect of her wedding – from the dress to the decor.

She wanted the day to be perfect, but looking at her damaged ends made her realize something: she needed a haircut. After avoiding scissors for 30 years, she finally faced the hard truth. She was ready.

Holly had butterflies in her stomach as she walked into Avant-Garde Salon. The stylist inspected her bleach-damaged hair that was over two feet long, while she nervously explained about the upcoming wedding and how she wanted to be completely transformed.

As luck would have it, she had chosen the perfect place to get it done. But would she back out at the last minute?

The stylist, Jeremy Harfield, ran his fingers through Holly’s hair and commented on the bleach that had grown out halfway down.

If Holly wanted a color match, it would be an extremely difficult job. But when she told him that she wanted to do something different, he was itching to work his magic – Holly was the perfect canvas for his art.

Holly was extremely nervous, but Jeremy just patted her on the shoulder and immediately got to work… before she had time to change her mind.

He gathered her two-toned tresses up into sections and began to snip. “Say goodbye to the old,” he quipped as, in one swift, final chop, he lopped off two feet of her hair. Holly’s eyes widened, but it was too late. There was no going back now.

Holly stared at her reflection in the mirror with wide, startled eyes. Her hair now just grazed her shoulders.

She couldn’t believe what she was seeing – she looked like a completely different person! The entire blonde half of her hair was completely gone. She felt like the weight of 30 years had been lifted off her shoulders. But why had she waited this long?

As Holly stared at herself in the mirror and gently ran her fingers through the ends of her hair, she made an emotional confession.

Keeping her hair so dramatically long was something that had stemmed from her childhood. She explained that she had always felt that she had needed to keep her hair long because of something her father had said to her when she was very young.

Her Father’s Ideas About Femininity

Holly’s father had instilled the idea in her that a woman must always keep her hair long – he told her that if she ever cut it, she would no longer be feminine or attractive.

She’d always clung to the idea that she wouldn’t be pretty if she ever cut her hair. But her transformation was only just beginning.

When Jeremy had snipped off Holly’s hair, she watched her tresses fall to the floor and felt the insecurities that had been there since her childhood fall away with them.

Once Jeremy had put the finishing touches on Holly’s haircut, she couldn’t stop touching it. Her long, damaged hair had been replaced with a sleek new, shoulder-length bob! Now, it was time for some color.

Stylist Sara Pestella took over from Jeremy, and she and Holly talked while she worked. Holly shared more about the seed of doubt that her father had planted all those years ago and how it had affected her life and relationships.

Removing her hair before her wedding had become a symbolic act for her. After her hair had been colored, Holly was moved to the makeup artist’s chair. And she was ready to let go of the old and embrace the new.

Holly’s makeover took seven hours to complete. She arrived at the salon at 7 pm and stayed until 2 am the following morning.

The stylists and makeup artists worked through the night until her transformation was complete. By the time they were done, no one would recognize her. Holly looked in the mirror and couldn’t believe her eyes.

Holly’s before-and-after photos began to circulate online, and her transformation quickly became an internet sensation. Nobody could believe that the woman with the two-toned hair was the same person.

Avant-Garde Salon got so much exposure for their amazing work that Holly’s photos got them nominated for Transformation Shot of the Year!

Of course, Avant-Garde Salon won the prize. Holly made a special appearance on the catwalk, wearing a sleek white jumpsuit and flaunting her new look. But that’s not all.

Holly was so enamored with the people at the salon that she quit her job as a gate guard and started working there as a receptionist. She never could have predicted that that fateful haircut would change her life!