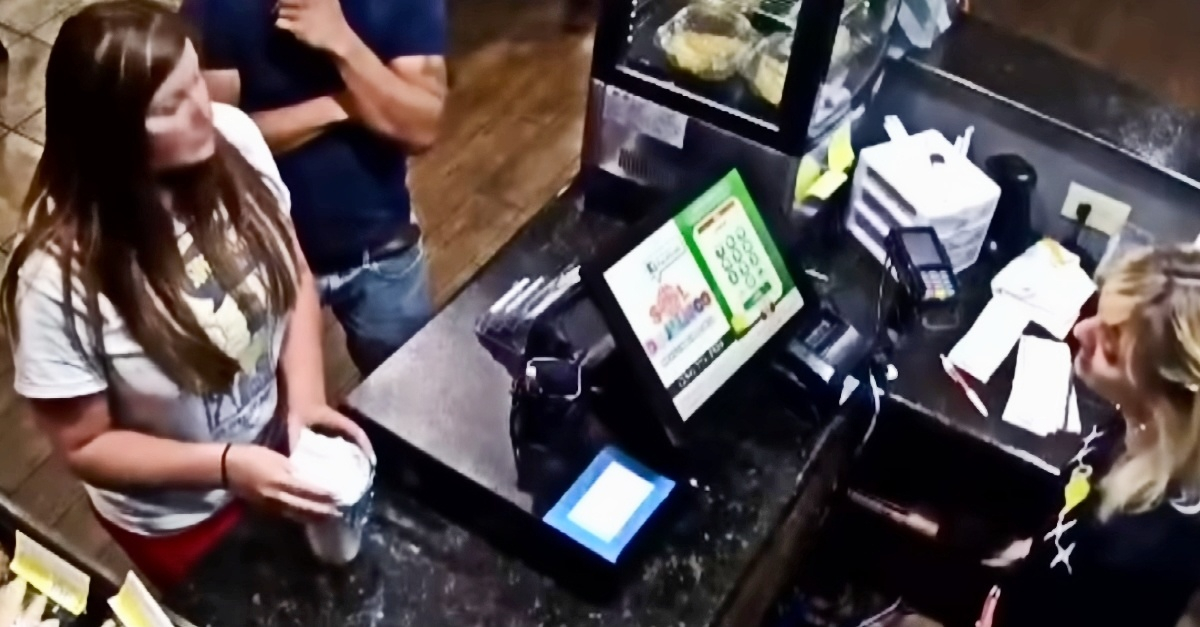 As the angry words bounced off the walls of the restaurant, she suddenly felt a splash of searing hot liquid on her face.

It seeped into her eyes and set them on fire. As the onlookers gasped and tried to help, she blindly reached under the counter for the only thing she knew could help her.

But it paid the bills and let her save up for furthering her education. More than anything, she wanted to spread her wings in design but it was expensive. So, when she was offered the position of restaurant manager, she snatched it up.

To say the position was stressful was more than an understatement.

Being higher up the rung, she was one of four people who had to be on the front lines of everyone’s complaints or bad days. But the worst customer she would ever encounter was about to walk into the restaurant and do the unthinkable.

It started with a single phone call.

Jannelle braced herself as the voice on the other end immediately went into an angry tirade. The source of the fury was over the plastic lid on her soup. The customer screamed a string of insults and profanity, which forced Jannelle to put the woman on hold – that and the fact there was a huge line up of other customers. It was a decision she’d live to regret.

Janelle put the phone down and drew her attention to the customers that stood in front of her, waiting to order. She could sense that they had grown impatient.

She apologized for the hold up and diligently worked her way through the line of orders. The queue had shrunk half its size. Janelle felt like she could begin to relax again. But just then, a scowling woman burst through the doors.

She was huffing and puffing as she walked past the other customers. Her face was red with fury. Janelle wondered how her day could have brought her to such a state.

They locked eyes and Janelle immediately knew that this woman was going to direct all of her anger on her and her alone. She barged towards her.

Jannelle took a deep breath and remembered her training. She might have hated being put in this situation, but she would remain professional.

The irate woman cut through the line, slid the container of soup across the counter and pointed at the lid. “It was so hot it melted the lid!” she spat.

Janelle quickly put two and two together. This was the woman that called earlier. The same woman who Janelle put on hold.

Suddenly, this woman seemed much more aggressive. Janelle noticed her eyes looked like she had been crying. She had to think fast to diffuse the situation.

The woman didn’t complain about any burns. Since it was just about the food, Jannelle apologized, offered a refund, a replacement soup, or something else off the menu for free to make up for the inconvenience.

How the woman responded would leave her completely speechless.

Janelle stood frozen behind the counter as her offer made the woman even angrier. She barked to speak to someone higher up the totem pole.

The few people that were left in the queue stepped back from the woman. She was radiating trouble. Janelle took a deep breath before answering.

Doing Everything She Could

“It’s just me today,” Jannelle said, apologizing yet again and reoffering the compensation. She smiled, trying to win her over by politeness.

But even for Janelle, this was getting out of hand and her eyes darted to under the front counter – maybe it was time to get her trusty backup?

Her smile had the opposite effect. She intended to lighten the tense situation and appear friendly. Instead, the woman understood it as mockery.

Suddenly the woman’s face twisted into sheer fury and disgust. What she did next shocked the entire restaurant and left Janelle screaming for help.

She picked up the soup container and threw its entire contents in Jannelle’s face. It all happened so fast.

Janelle was in shock. She didn’t even have time to flinch but as soon as the heat set in and her eyes began to sting, she knew there was a much, much bigger problem.

Jannelle could hear gasps from the other customers standing in line.

She frantically and blindly reached for anything to wipe the soup away – since it was a Mexican restaurant, it was packed with hot spices and burned like the fires of damnation. She felt a hand on her back. She flinched and grabbed for under the counter.

Through blurry, pained vision, she swiped at her phone – thankfully she only had to dial 911.

Every manager was given a phone in case of emergencies like theft, injury, or needing to reach out to the owner. The hand on her back were those of her coworkers, and they steered her toward the sink.

Jannelle bawled as she frantically washed away the oily chili residue. It hurt more than she could describe. And when she could finally look in the mirror, her skin was red from scrubbing.

Thank goodness the soup had cooled down just enough not to really burn her. But what about the customer?

After the woman threw the hot soup in Janelle’s face, the customers stood in shock just like Janelle. But once Janelle started to scream in pain, they fully understood what had happened.

“Hey!”, people started shouting. One man from the queue stepped forward and grabbed the woman back from the counter. But by the time Janelle could see again, she was gone.

The woman had run out, still irate.

But she had failed to notice what was behind her – a slew of customers with their phone out. Her actions had enraged the entire restaurant. They were all recording her on their phones, desperate to get her face on tape. She left unscathed but not for long.

On top of the store’s security footage, the woman’s fate was sealed. Unbeknownst to her, there was a camera just above the counter, pointing down towards the cash register and the customers in line.

Everything she did was caught on tape – her face included. Now, all the cops had to do was find her.

By the time the cops arrived at the restaurant, the woman was long gone. However, they brought an ambulance with them and insisted Janelle be checked out.

Once they determined she was fine, they began to ask questions. They got Janelle’s testimony as well as every other witness in the restaurant. Janelle could already taste the sweet flavor of revenge.

Janelle handed the cops the security footage and confirmed that she wanted to press charges against this woman.

However, they had to find her first. They had no idea what car she drove off in but once they ran her face through their facial recognition system, it should be an easy find.

Janelle was told to sign off and take the rest of the day off. She didn’t want to admit it but she was still in shock. She had never experienced something like that before.

She agreed and left once her replacement arrived. She went home, grabbed a shower, and tried to relax while law enforcement honed in on her aggressor.

It wasn’t until the next day did Jannelle get word that the woman had been brought into the station in handcuffs.

Clearly the police were taking this seriously, and thank god for that. Details trickled out slowly, but it was when she saw the mugshot did an icy shiver run down her spine.

The woman, identified as Amanda Martinez, coldly stared at the camera – clearly unaffected by her actions. The case would unfold with $5000 bail, possibility of a year in jail for aggravated assault and bodily harm – as well as an obvious life ban from the restaurant.

The owner, however, did something Jannelle truly appreciated.

While Jannelle’s last words toward the woman were “I’m definitely pressing charges.” The owner put up a sign directed to all customers.

“Our workers are human too. We do not condone any mistreatment of our employees. Matters will be dealt with civilly and politely – if not, you’ll be asked to dine elsewhere.”