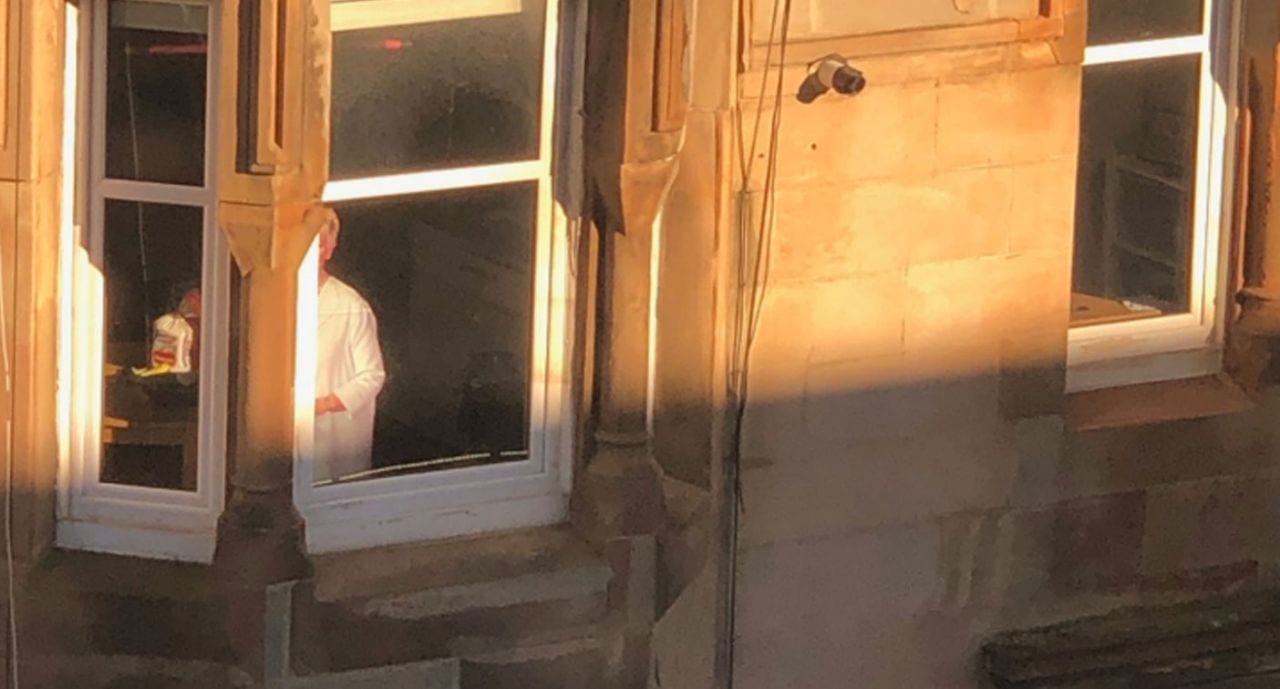 We’ve all found ourselves daydreaming and staring idly out of the window and staring into the distance. Sometimes we might see something interesting. In the case of woman, however, she saw something that worried her. 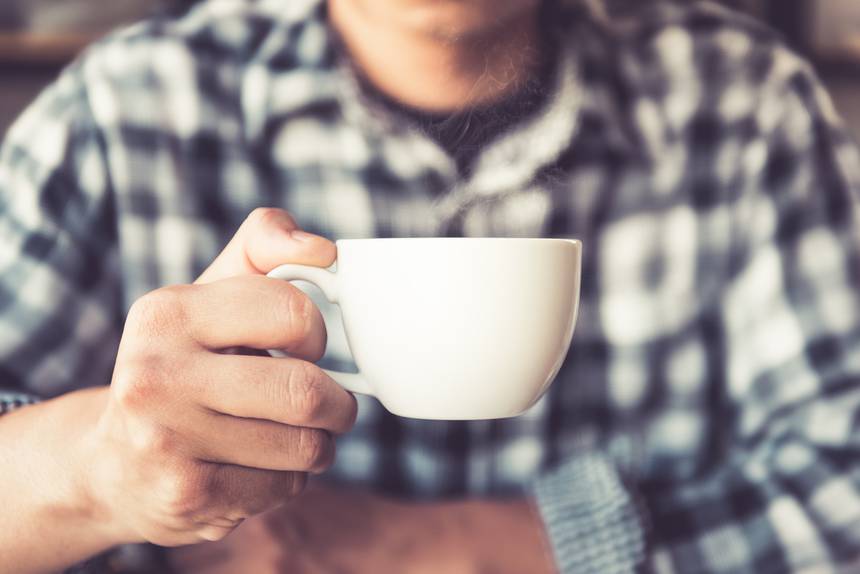 The woman looked out of her window and noticed a figure across the road. There, by the window, stood a figure. As it was early in the morning, she merely assumed that this was someone drinking their morning coffee and looking out the window.

The woman didn’t think much of the situation. After all, who doesn’t enjoy having a nice view when you drink your morning coffee. She turned back to what she was doing before and soon the figure at the window slipped her mind completely. 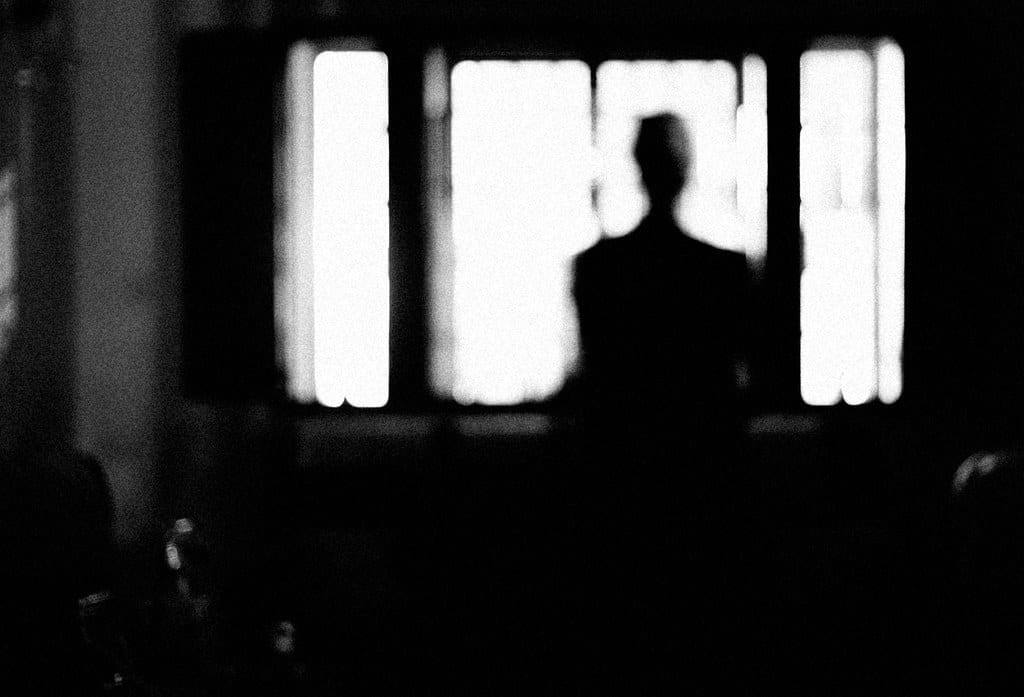 However, when her mind drifted again sometime later, she noticed that the figure hadn’t moved. Hours later the person was still standing perfectly still. This worried her so she moved to get a better view of the window. That’s when She saw the truth. 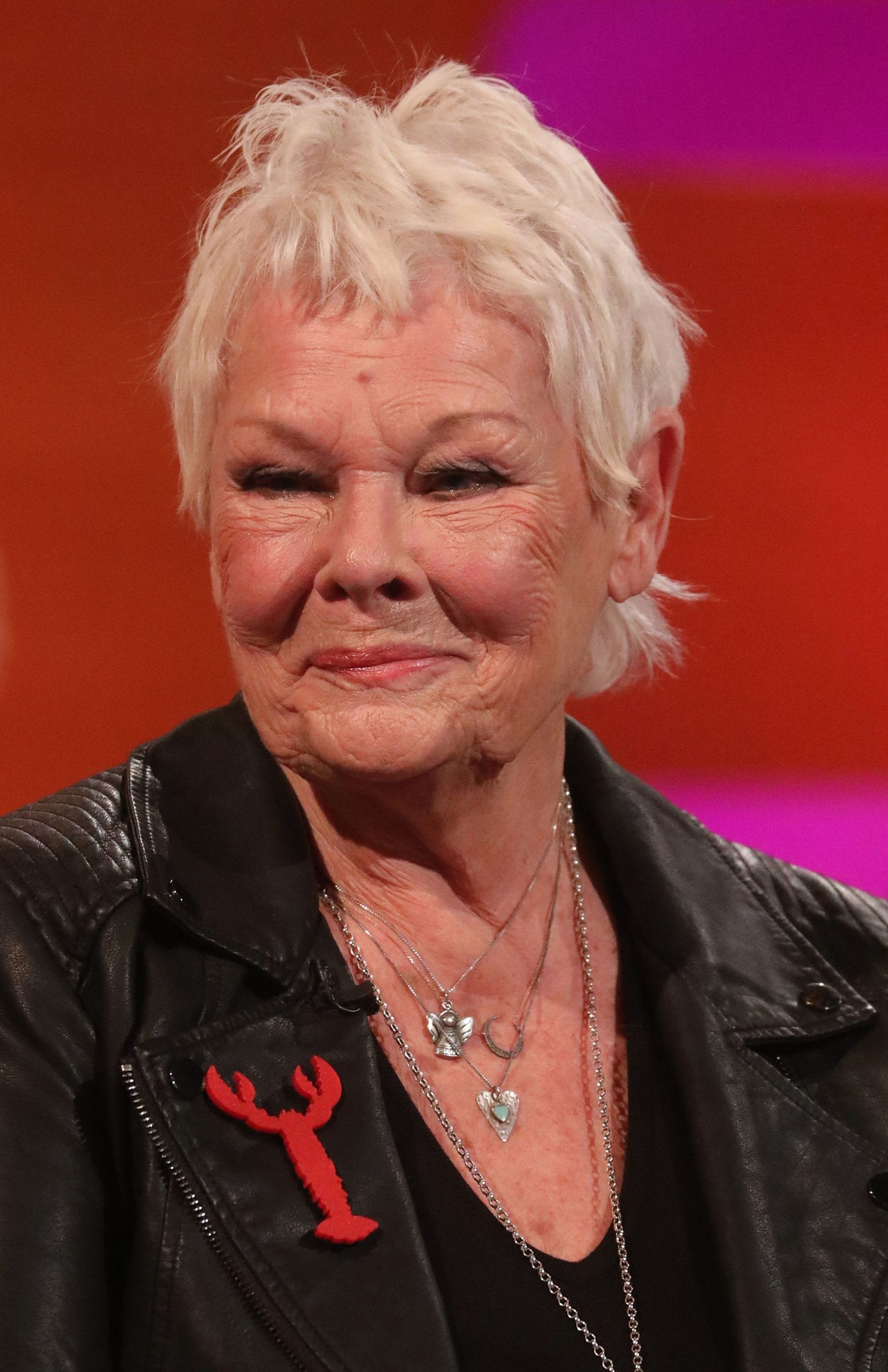 Once she moved and got a better view she finally saw the truth of the situation. There, in the window, stood none other than Dame Judy Dench. The woman couldn’t believe her eyes. She took a closer look and realized that there was more to the story.

She had a good laugh and quickly shared the story with a friend of hers. Her friend was none other than Amy MacDonald. Once she heard the story, Amy took to Twitter to and decided to share the story with her followers. 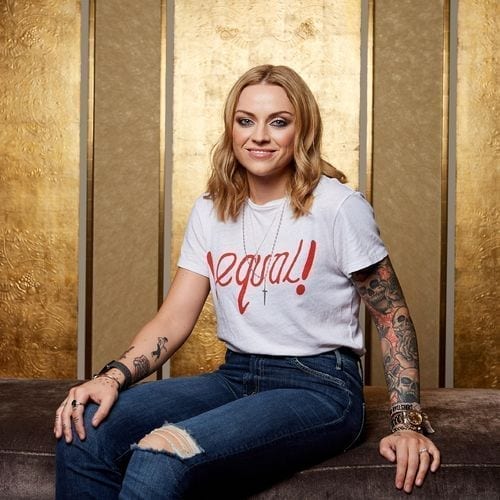 Scottish singer-songwriter Amy Elizabeth Macdonald is a talented guitarist, and musician. Her debut album “This Is The Life” was released in 2007. She has released three other studio albums and has sold more than 12 million records worldwide. 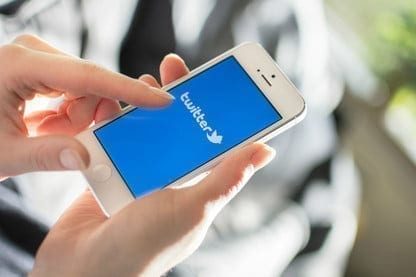 In her first post Amy wrote: “My mate was in work and she noticed a woman standing at the window in one of the flats opposite.” Her next Tweet said: “She didn’t really think anything of it. She thought it was just a woman enjoying a coffee whilst looking out the window.” 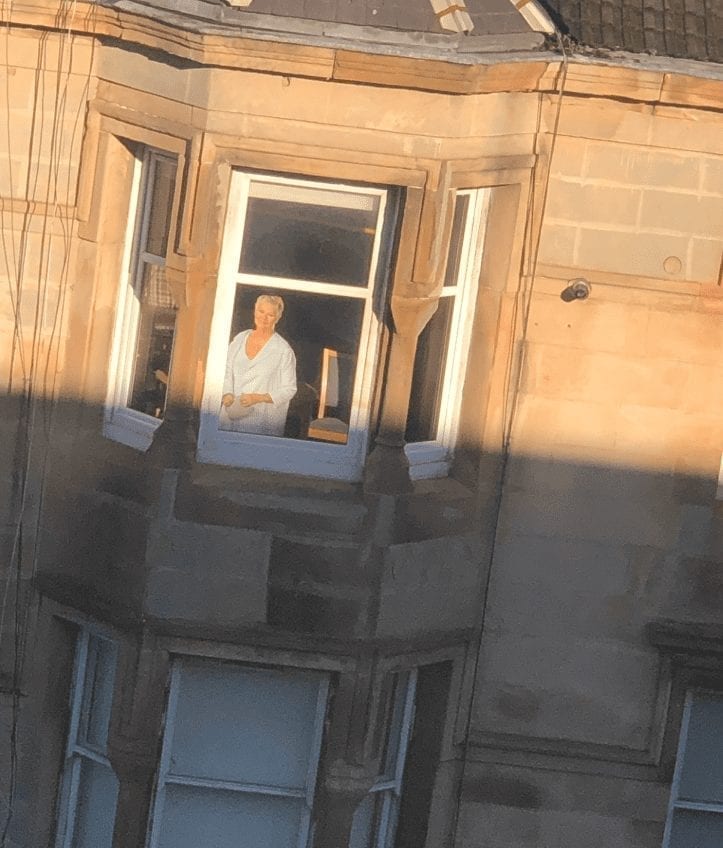 She continued: “She started to get a bit worried when hours had passed and this woman had not moved. What she thought had been a person was actually a cardboard cutout of Dame Judi Dench.” 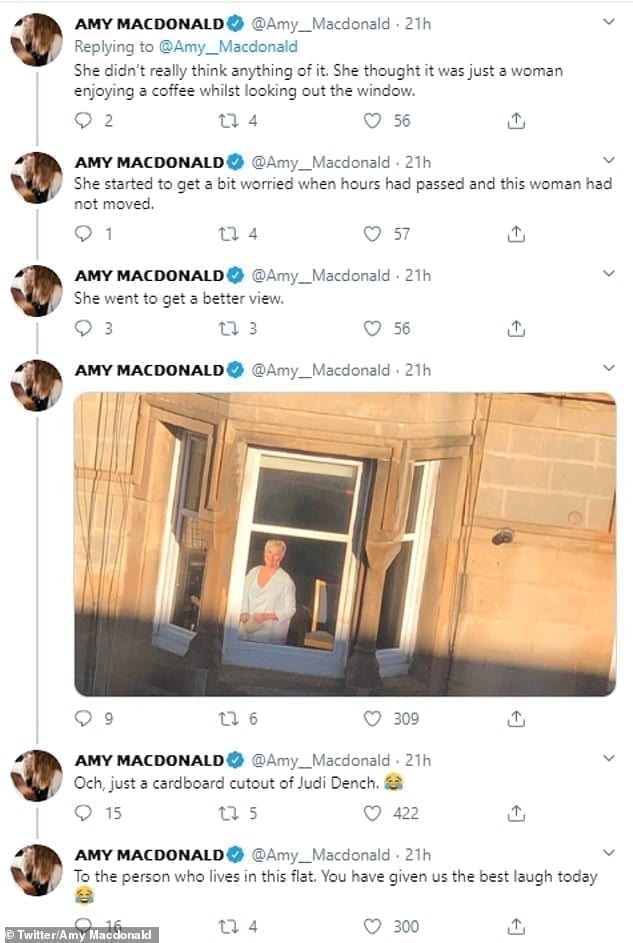 Amy continued her Tweets: “Och, just a cardboard cutout of Judi Dench. To the person who lives in this flat. You have given us the best laugh today.” Amy and her friend had a good laugh, however, it didn’t end there.

Amy’s followers wasted no time in sharing the posts and commenting on the situation. “I always leave my cardboard cutout of Judi Dench in the strangest places,” one user commented with another adding “Tell her to stop being nosey lol.” 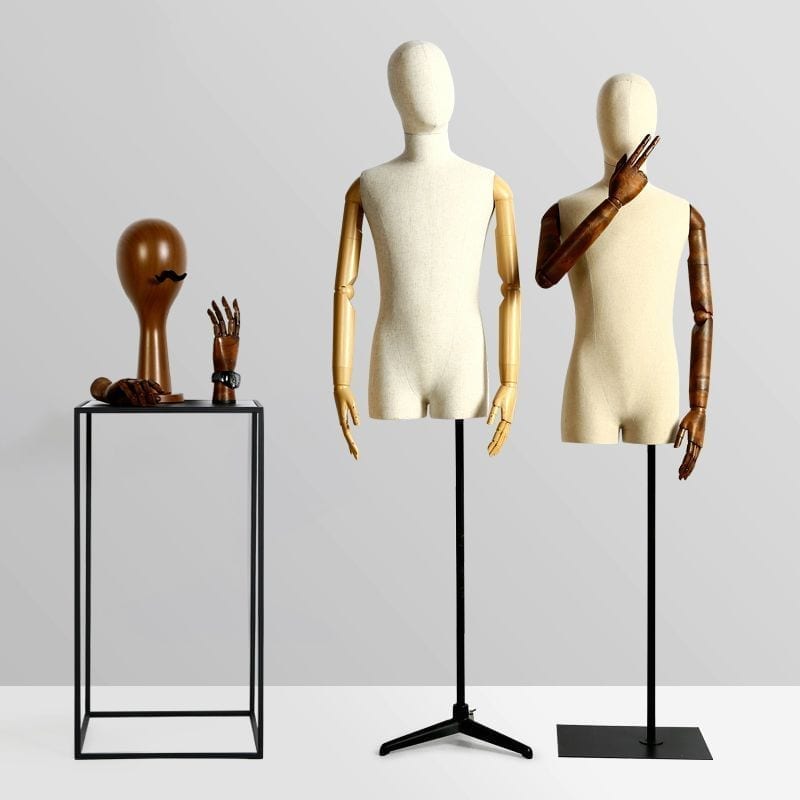 Other users shared similar stories of their own. ‘For years, someone down in the west end of Greenock had a pair of full-size mannequins of Laurel and Hardy, bowler hats an all, in each side of their bay window overlooking the main coast road at Battery Park..real freaky stuff,’ one commented. 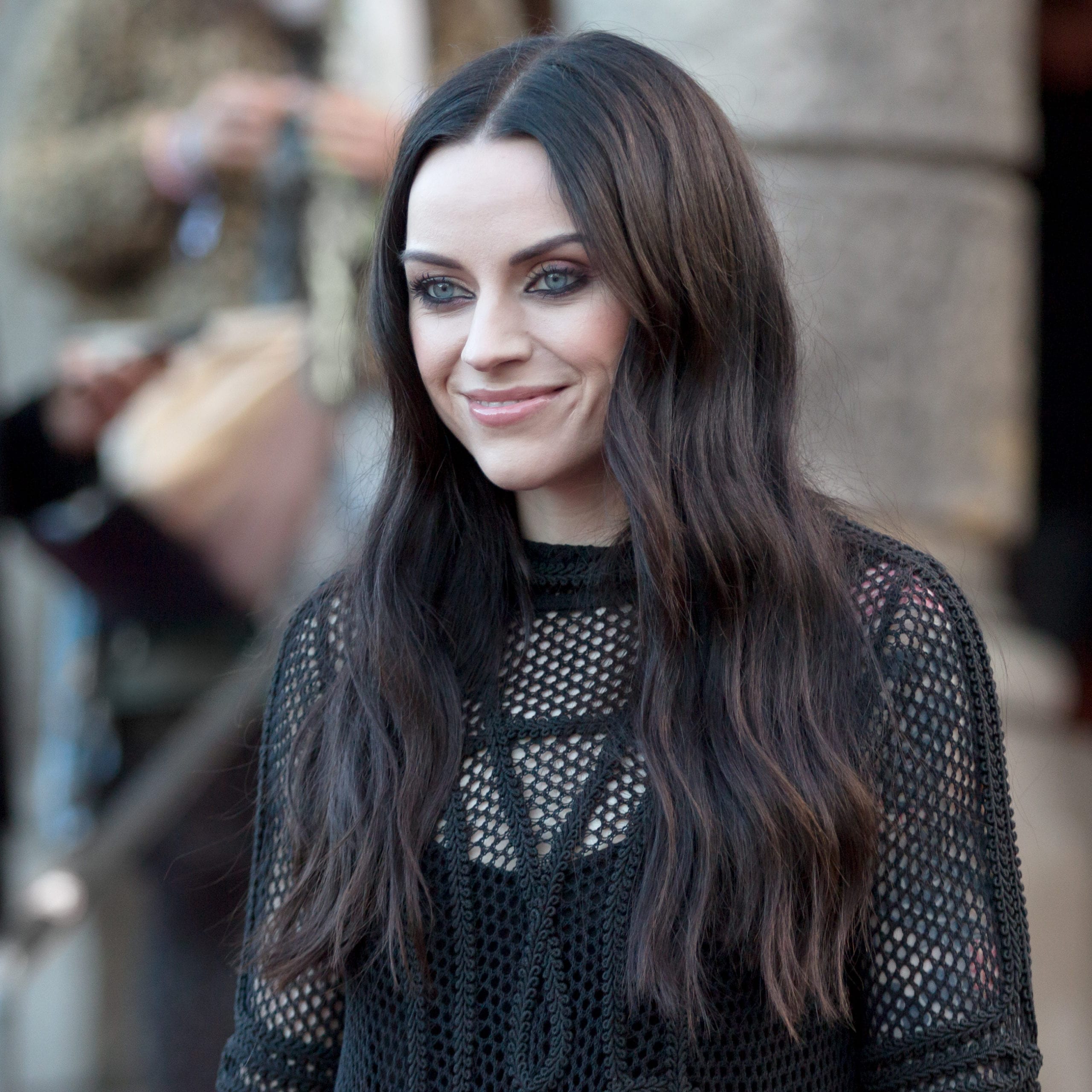 Some people pointed out how odd the situation was and wondered why one would have such a thing. One user even commented: ‘I watch too many true crime docs. I immediately suspected some sort of gruesome murder. Standing corpse at the window.’

Another user added: ‘Haha my friend has one of these in his house. I can’t remember why they got it, but usually it’s just in random places around the house. Makes me laugh every time!’ One user shared: “’Utter belter! My mum had a full-size Julio Englesia in her bedroom for 15 years.’”

One user shared their own odd experience: ‘I had the same story near the flat I used to live in Glasgow. Thought this lady was watching me as I walked home everyday until one day after several paranoid weeks I realised she was cardboard.’