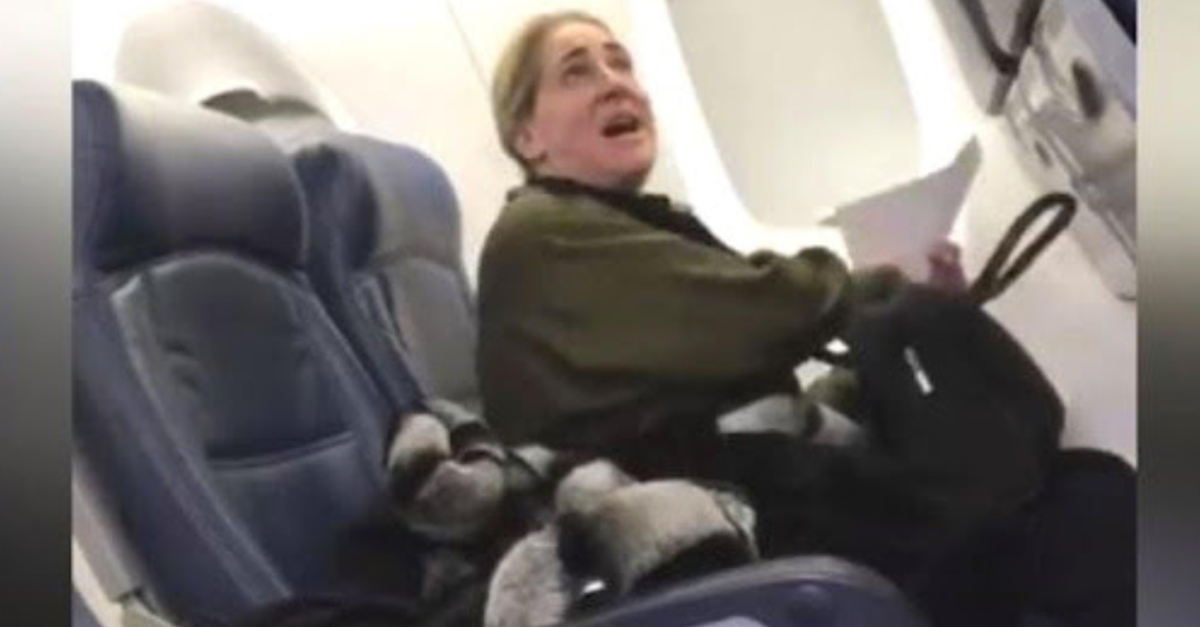 Tracy kept looking at her watch over and over again. She couldn’t help but feel nervous due to her flight’s delay. The silence has taken over the entire plane. Not a single person dared to say a word.

Something was not right. Just as Tracy was about to get up from her seat, the security entered the plane.

Tracy was one of the many passengers waiting to board their flight that morning. Flying usually makes her nervous, and this time was no different.

She felt her anxiety creeping in as she waited for the plane to take off. Twenty minutes of waiting suddenly turned into forty. What was going on?

She Couldn’t Ignore The Feeling

Tracy couldn’t ignore the feeling that something was off about this flight and the people on it. Some of her previous flights got delayed due to bad weather conditions, but today the weather was sunny.

There were no flight attendants in sight, and the passangers behind her started whispering.

Almost One Hour of Waiting

After forty-five minutes of waiting, Tracy couldn’t sit still in her seat anymore. Finally, she spotted the cabin crew on the other side of the plane.

A few of them were gathered in the corner of the plane, clearly bothered by something or someone. Tracy felt her heart pounding in her chest. She was trapped.

Tracy wanted to leave the plane, but it wasn’t possible. Some of the other passengers rushed towards the entrance of the aircraft, but the door was shut. No one was allowed to leave.

One Hour Had Passed

After one hour of sitting on the plane, most passengers began shouting, crying, and asking for help. There were no announcements from the crew either, which made it even more suspicious.

The plane was in total chaos. By that point, everyone was panicking, even the people who didn’t seem to care in the beginning.

The Cabin Crew Were Scared

Tracy glanced at the cabin crew, who were still hiding in the corner. They looked horrified. It was clear they knew something no one else did. Then, suddenly, four security guards rushed past them.

Tracy had a clear view of what was going on. The guards approached one of the passengers and gathered around him.

The security guards stood in front of him for a few minutes without moving. Who was that passenger? Why were the guards on the plane?

Tracy imagined the worst-case scenario and started praying. She hoped it was all just a big misunderstanding, but things were about to get even worse.

After some time, the security guards moved for a moment, and Tracy was able to see the man they approached. The stranger was standing still with an odd expression on his face and didn’t say a word.

Tracy couldn’t stand it any longer. She needed answers, and she needed them now.

An Announcement from the Pilot

Suddenly she heard an announcement from the pilot. Judging by the tone of his voice, they weren’t expecting any good news.

“Everybody, please remain calm. We believe we have the threat under control. Please remain in your seats.” he began. Tracy was terrified and confused. Why was he a threat?

She got out of her seat and made her way towards the security guards. What Tracy saw right in front of her left her at a loss for words.

The older man who the guards approached was unable to move as if he was frozen. She took out her phone and prepared to take some photos.

The Situation Was Getting More Intense

The guards surrounded him again and asked him to raise his hands above his head. The man didn’t follow their order. Tracy managed to snap a photo of it.

The situation was getting even more intense. The man continued to shake his head and refused to sit down. He looked afraid and confused.

The Pilot Got Involved

Suddenly, Tracy saw the pilot walking down the aisle. He turned and abruptly told the guards they needed to immediately escort the man off the plane and take him into custody.

It was clear the man required medical assistance. Something was very wrong with him. Tracy decided to take the matter into her own hands and asked the guards to step aside.

They Let Her Talk To Him

The security guards moved, and Tracy was able to get closer to the man. She told him she was there to help, but he didn’t understand her.

Tracy began using her fingers while speaking to him, and the horrified look on his face was replaced with relief. The man was deaf. That’s why he couldn’t follow the instructions.

Tracy asked the man for his identity document using American Sign Language, and he gave it to her without any hesitation. The stranger she was talking to was Joseph Zeledon.

When she asked him if he could give her a phone number of a family member or a friend, he just stared at her. Then, she finally realized what was going on.

Tracy noticed a medical alert bracelet on his wrist. She gently took his hand to get a closer look at it. It had the word “Dementia” on it.

She quickly inspected the bracelet for a phone number she could dial, and there it was. She called it immediately and hoped someone would answer.

“Hello?” Tracy heard on the phone. It was Joseph’s son, Jason. She quickly explained everything, and Jason assured Tracy he would arrive at the airport as soon as possible.

Jason was worried sick. He knew his father had dementia, but he had never wandered off on his own before, and now he was about to board a flight. Where was he going?

Jason couldn’t stop thinking about his poor father sitting alone on the plane. How did he let this happen? But, most importantly, how did he end up so far away from home?

He always tried his best to make sure his father was comfortable and safe, but this time he failed.

He Arrived After One Hour

Jason made it to the airport after one hour and hoped it wasn’t too late. After seeing Tracy and his father standing in the lobby, he was instantly relieved.

They were surrounded by other passengers who also missed their flight to help his father. Jason’s heart was filled with gratitude.

Joseph had wandered off on his own and almost ended up at another state. How he managed to board a flight still remains a mystery.