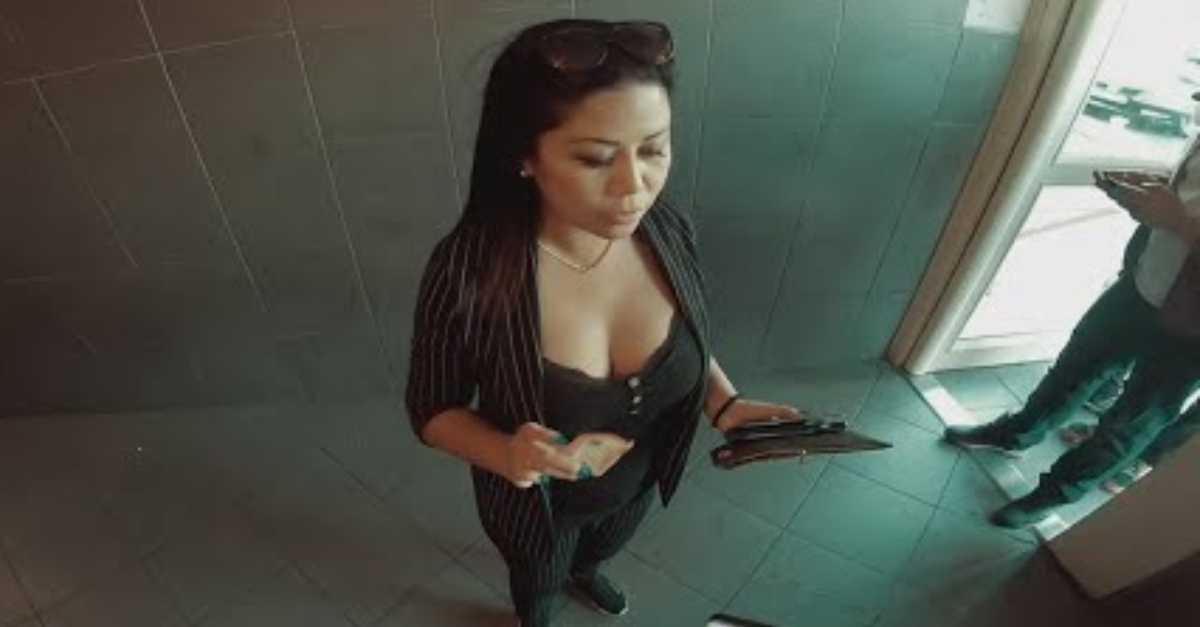 For months, this TikToker has been receiving mysterious recordings of herself. Someone had been monitoring her, filming her, and then forwarding her the footage.

It got to a stage where she thought she had no choice but to call the cops and let the authorities handle the situation. But suddenly, the truth was revealed. She figured out who the enigmatic stalker was.

Have you ever had the sensation that someone was watching you or following you around? Many individuals with psychiatric illness suffer from repeated delusions of this type.

There’s nothing worse than experiencing such a sensation; it’s unbearably frightening. The protagonist in this story freaked out when things started happening around them that convinced her that what she was experiencing was not a delusion but something real.

She initially assumed it would be a one-time occurrence. Maybe it was simply a crazed fan or something. However, it would eventually become a trend. She became frightened as a result.

But, eventually, she would discover the truth. She also had the chance to address her stalker in person.

The Beginning Of It All

All of this started on a Wednesday afternoon. The TikToker was just relaxing at the mall, eating a piece of cake and scrolling through her phone in a restaurant. The day seemed to be a lot like any other day.

She was completely unaware of what was about to happen to her. Something that would set in motion a vicious cycle that would last for the next two months.

In the midst of browsing TikTok looking for inspiration for her own content, an unknown number sent her a message.

Who could it possibly be? The message appeared to be devoid of text, consisting solely of a video file. The woman opened it curiously. The video shook her.

The Times of Israel

Some stranger had just made a video of her a few moments before! From the back, she could see herself eating her cake while browsing through her phone.

Apparently, the video was filmed from above and behind her. Her gaze shifted to the upper levels of the mall. There was nothing unusual in her observations. Everyone appeared to be going about their daily routines.

This encounter made her a little uneasy. Who could be spying on her? And how did they acquire her phone number, to begin with?

She brushed it aside as she went about her business. She simply saw it as an amusing anecdote that her fans would love. So the first thing she did was a post on Tiktok about what had just transpired. She will eventually come to regret her haste in dismissing this episode.

Almost forgetting what had happened on Wednesday, she went about the rest of her week as usual. But then, on the following Wednesday, something unexpected happened.

Her phone rang while she was walking her dog in the park. It had been a message. On the day before, she received another video, also from the same phone number. Where did it come from?

It Did Not Stop

A week later, the next week, and the week after that, the same incident repeated itself. It continued in this way for two months. And the TikToker became quite frightened.

She informed the police about what was happening. So they could track down the anonymous phone number and find out who it belonged to, she provided them with the number. The TikToker waited quietly. On Wednesday, however, something unexpected happened.

Her attention was focused on the grocery store as she browsed for dinner ingredients. Her greatest fear was that she would once more receive an anonymous video without explanation on that day.

Every Wednesday was becoming horrible for her because the cops couldn’t discover anyone affiliated with the number. Then she heard a click from behind her.

She had a feeling it was him. Her stalker had to be that person. She didn’t turn around; she had a better idea in mind. She took out her phone and turned on the camera to see who was following her, and she began shooting.

She noticed a senior man approaching her from behind, carrying his phone in his hand. That was him, then. For two months, he had been following her around and frightened her. And she knew exactly what she had to do at that point.

She turned around and confronted the man. She yelled at him to stop following her around, called him a disgusting creep, and many other names.

Everyone in the supermarket was looking at them, and the man didn’t know what to do. He was red as a ripe tomato; he knew he had just been caught.

The stalker just left his shopping cart there and ran to the nearest exit while everyone was still staring at the scene and wondering what the heck was going on.

The TikToker felt victorious. She finally had faced her archnemesis, and she had won the battle. She knew her next step; she would show the footage to the police to make it easier for them to catch the stalker. But first, there was something else on her list.

She Shared The Video

The first thing she did was share the video of the stalker and tell all her followers what had happened. She thought the information might be useful for other girls in the area.

Plus, it would make some colorful content that her followers would enjoy. After doing this, she went to the nearest police station. She showed them the video she had recorded so that it could be used in the investigation. And two weeks later, she received a call.

It was a police officer. He informed her that her stalker had been caught thanks to her video. He had been reported by other girls in the area numerous times for harassment and threats.

The man is currently awaiting trial and will probably face a jail sentence for his actions. And all thanks to the proof provided by the TikToker.