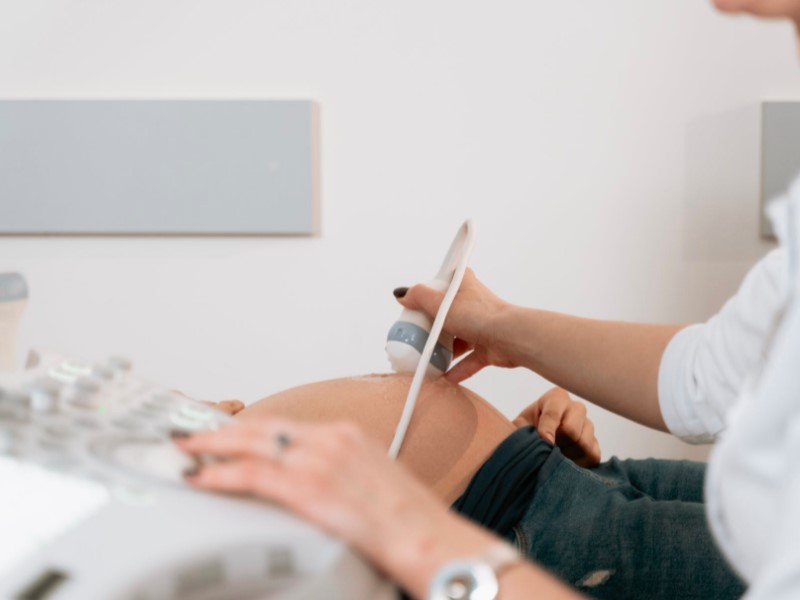 The cold feeling on her belly, the smooth piece of plastic sliding on her skin. She was used to these sensations now.

The nurse continued to chat while she applied more pressure, but Rebecca was hardly listening. She was waiting for something to appear on the screen. Suddenly, the nurse went quiet. Rebecca’s heart dropped.

Growing up, Rebecca had always wanted a big family. When she turned 25, it seemed like all her dreams were coming true.

She met who she thought was the man of her dreams, and they had a little girl together. But Rebecca never expected to go through this much pain so early on in her relationship.

Her baby, Summer Grace, was perfect in every way. But that wasn’t enough to keep her father in the picture. Rebecca resolved to raise Summer on her own – and she did.

Even though Rebecca desperately wanted more children, she knew that she had to wait for the right guy to come along this time.

Rebecca raised Summer by herself. Although it was challenging, she felt extremely blessed to have her daughter.

From her first steps and her first day at school, Rebecca was there for every milestone in her life. And now that her daughter was a teenager, Rebecca could focus more on her career. Then, Rhys came along. It was love at first sight.

When Rebecca met Rhys Weaver, she knew he was the “one,” so they began a whirlwind romance.

Rebecca had put her dreams of having more children on the backburner for thirteen years, but now she felt like she was being given a second shot at the big family she had always wanted. Only, there was a problem.

Rhys and Rebecca both desperately wanted to have children together, but it was beginning to look like an impossible dream.

The reality was that Rebecca was now 38 years old, and that window of opportunity may have passed. They spoke to doctors, who all explained the risks. But Rebecca was still determined to try.

It took nearly a year of IVF treatment, but Rebecca eventually got pregnant. She had wanted to keep the news a secret until the second trimester, but she never made it that far.

After the heartbreak of an early miscarriage, she didn’t want to try again. She spiraled into a deep depression and stopped leaving the house. Rhys couldn’t bear to see her like that. Little did they know, something much bigger than both of them was coming.

In December 2020, Rhys convinced Rebecca to try one more round of IVF. If it didn’t work, he reasoned, they could start to look into other options. After all, there were plenty of children who needed a good home.

Rebecca prayed every night for the pregnancy to take. But something else was about to turn their lives upside down.

In February 2020, Rebecca suspected that she might be pregnant, so she took a home pregnancy test. She had been feeling a little off for a few weeks… but she hardly even dared to hope.

She closed her eyes and prayed while she waited for the ClearBlue test to either break her heart or make her the happiest woman on earth. Which would it be?

“I was offered an early scan at seven weeks,” Rebecca explained. “Rhys was able to come to the scan too, as hospitals were still open at that point. We saw our tiny, little baby. It was so small…”

A few weeks after the initial scan, Rebecca went for a 10-week ultrasound. But the doctors had some unsettling news.

The doctors warned Rebecca and Rhys that this was a “geriatric pregnancy” due to Rebecca’s age. They explained that there were certain risks that came with carrying a baby after a woman turns 35.

But Rebecca wouldn’t be discouraged. When she saw the ultrasound of her 10-week-old baby, she fell in love right there and then. But when the excited parents got home, they saw the news.

On the 23rd March 2020, the U.K. went into full lockdown. Rhys and Rebecca couldn’t believe the news. But life had to go on, and they couldn’t let the terrifying things going on all around them distract them from what was meant to be a perfect moment in their lives.

But when Rebecca went for her 12-week scan, the nurse picked up something strange on the ultrasound.

The Scan That Changed Everything

Rebecca felt the cold jelly and the smooth piece of plastic sliding on her skin. It was her third scan, so she was used to the procedure now.

The only difference this time was that Rhys had not been allowed to come in with her. Suddenly, the nurse went quiet. “Is everything okay?” Rebecca asked. Then, the nurse called for the doctor.

The sonographer had picked up a second figure on the ultrasound. But how could that be? Just a few weeks before, everyone had been sure that there had only been one baby.

Rebecca soon learned that it wasn’t twins she was looking at – but this was something completely different… an anomaly. Everyone was gobsmacked.

“What on earth had happened, how did they miss the other baby?!” Rebecca remembers thinking. “The sonographer was gobsmacked, I was gobsmacked.”

Meanwhile, Rhys waited in the parking lot, oblivious to the chaos that was exploding in the doctor’s room. But, as the sonographer wasn’t able to measure the second baby properly, Rebecca went for more scans. Something definitely wasn’t right.

Baby number two was significantly smaller than the first. The sonographer and doctors couldn’t understand what was going on… until Rebecca saw a twins specialist.

What had happened was Rebecca had ovulated again. Basically, she had conceived another baby while she was already pregnant. This extremely rare phenomenon is called “superfetation.” But what did this mean for the babies?