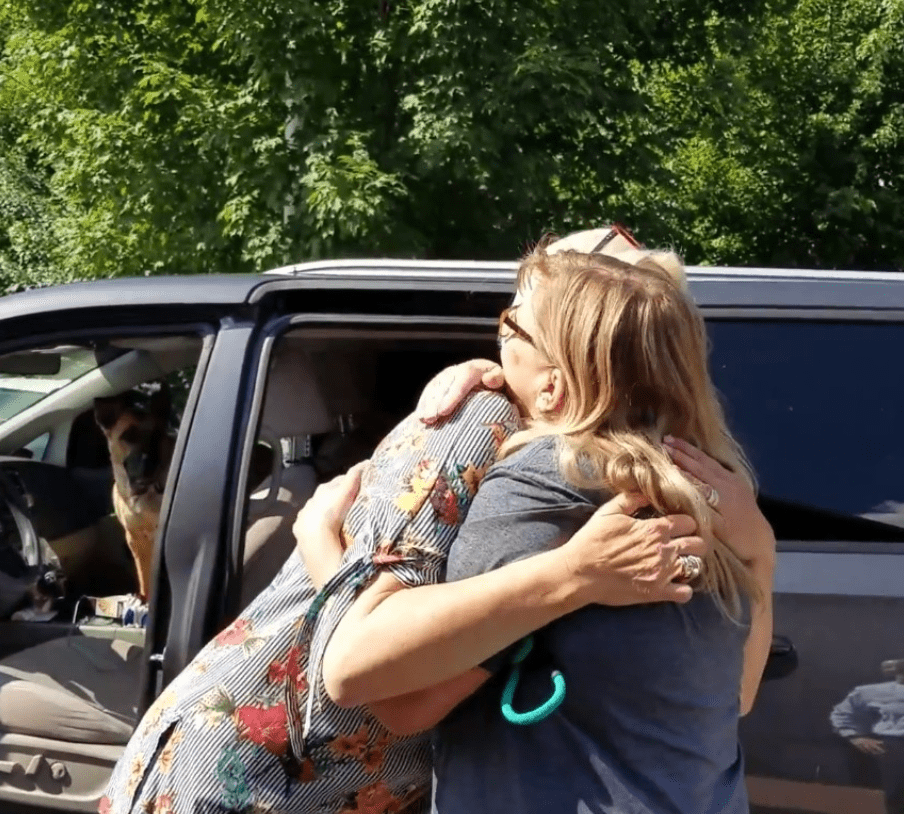 This doesn’t happen every day, in fact, it’s almost unheard of. A woman looking for a dog at a shelter opted for an entirely different approach to all the regular adopters.

And on July 24th, all the staff at Asheville Humane Society Adoption Center would shed tears of joy when Leslie Sacks came along. 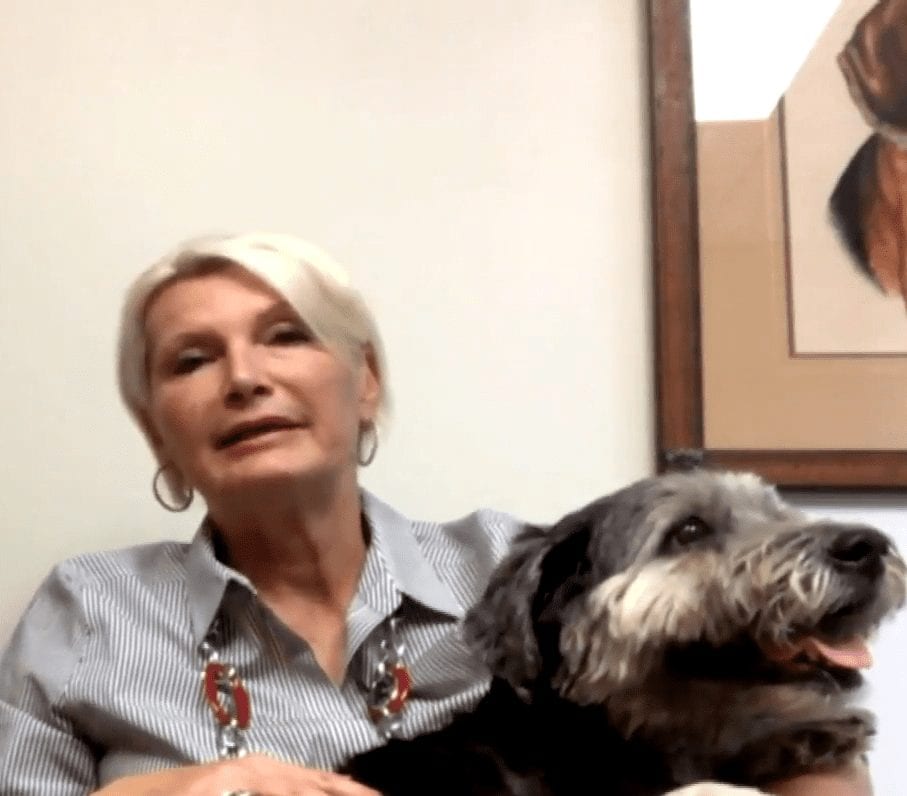 Leslie had an unusual request. She would ask the shelter to see the oldest dog they had — even if it had medical conditions.

She was adamant that she wanted the dog that had been passed over for adoption time and time again, for any and all reasons. But what did Leslie do that was so unprecedented? 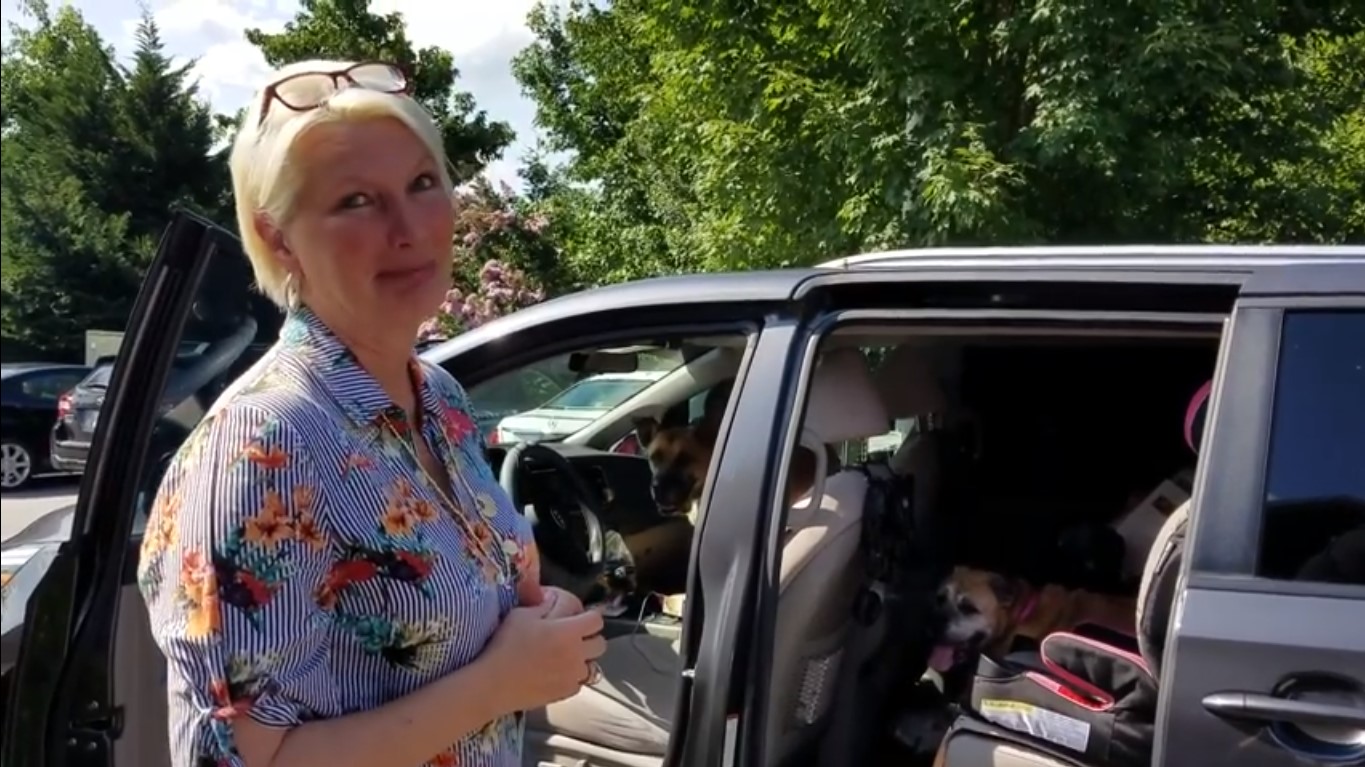 When she arrived at the Ashville Humane Society in North Carolina, she met Sam, who had been living at the shelter for six months.

The staff told her that she had previously been adopted, but was returned just one month later. Leslie knew that she could be a “problem” dog. But what was Sam’s story? 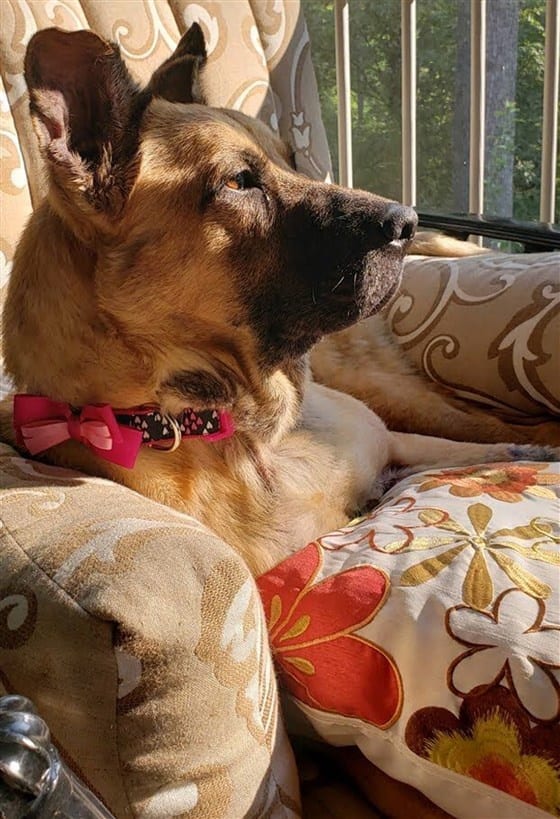 7-year-old Sam had already been through a lot in her life. She had a severe skin allergy and had been surrendered in 2018. Her condition lead to “masses” on her skin, along with missing hair.

She wasn’t the prettiest dog, but Leslie was hoping to give her a forever home when something else happened.

Running Out Of Time 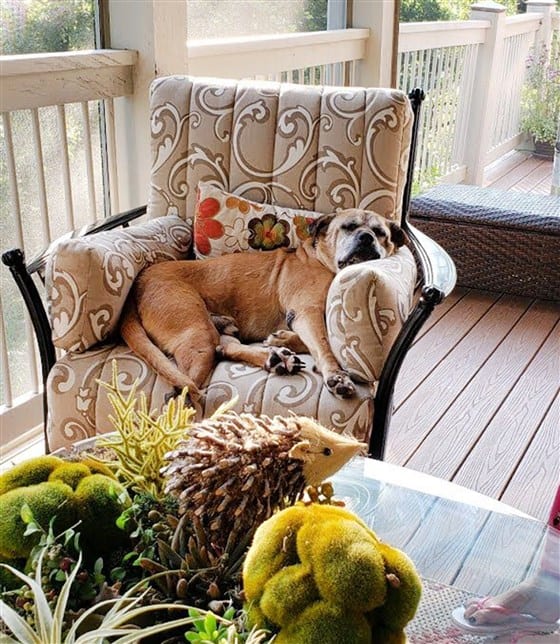 13-year-old Brutus, another “unadoptable”, had also been surrendered to the shelter. His time was running out fast and he was due to be euthanized. What was Leslie going to do? 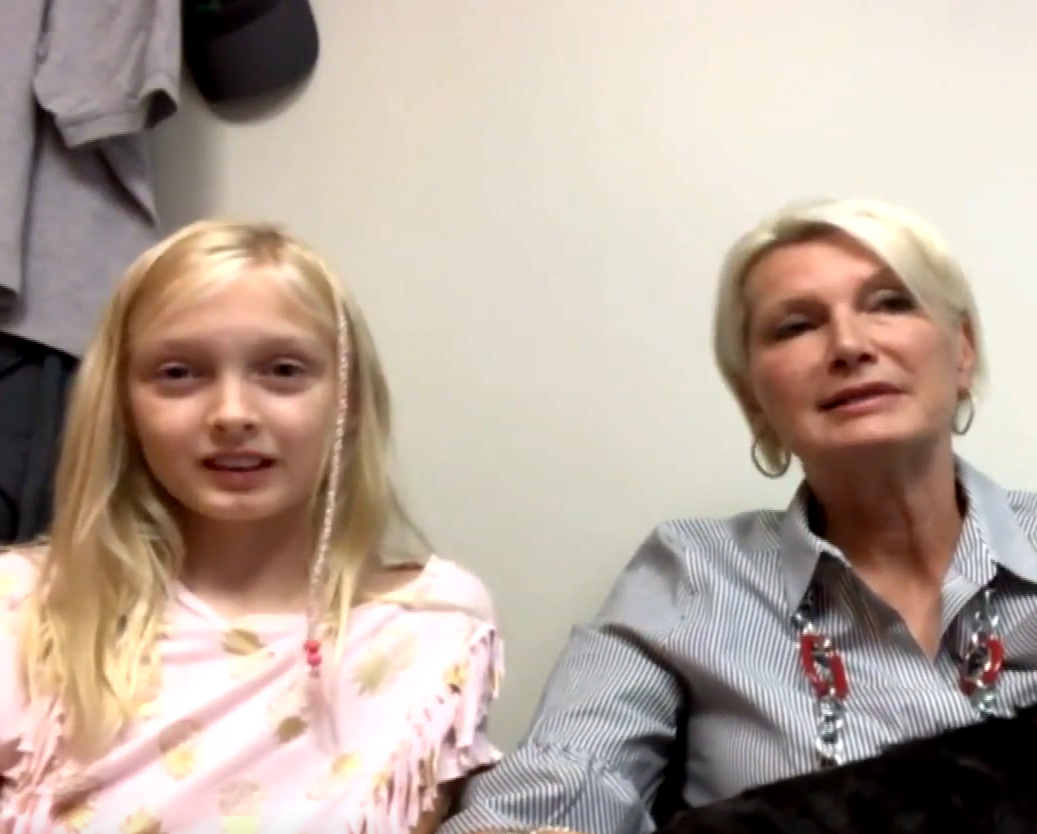 Leslie and her family had just lost their beloved dog, which is why they had come to the shelter to adopt. Siena, Leslie’s 10-year-old daughter, offered some insight into her mother’s feelings: “I thought my mom would be strong, but that’s actually the first time I’ve seen her cry before.”

So what would her decision be? Sam or Brutus? 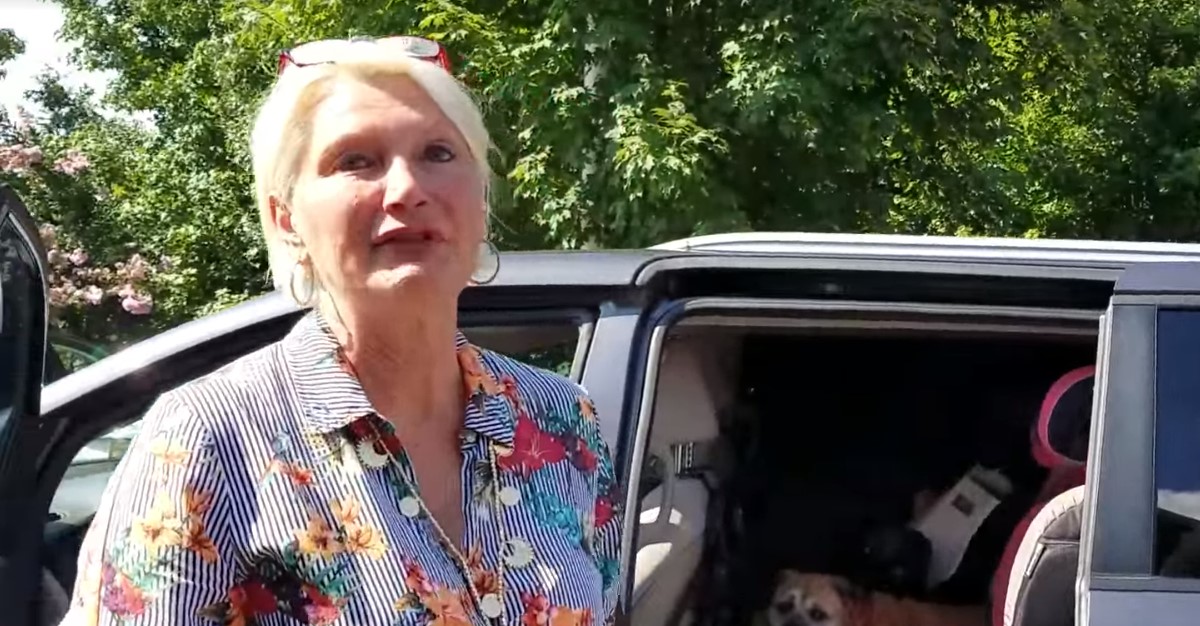 Meredith Pitcairn, the center’s communications and digital fundraising manager, gave Leslie some more information on the two “unadoptables” and their special needs.

Sam needed a specialized diet to alleviate her skin condition, and Leslie also had to consider why she had been returned to the shelter for a second time. 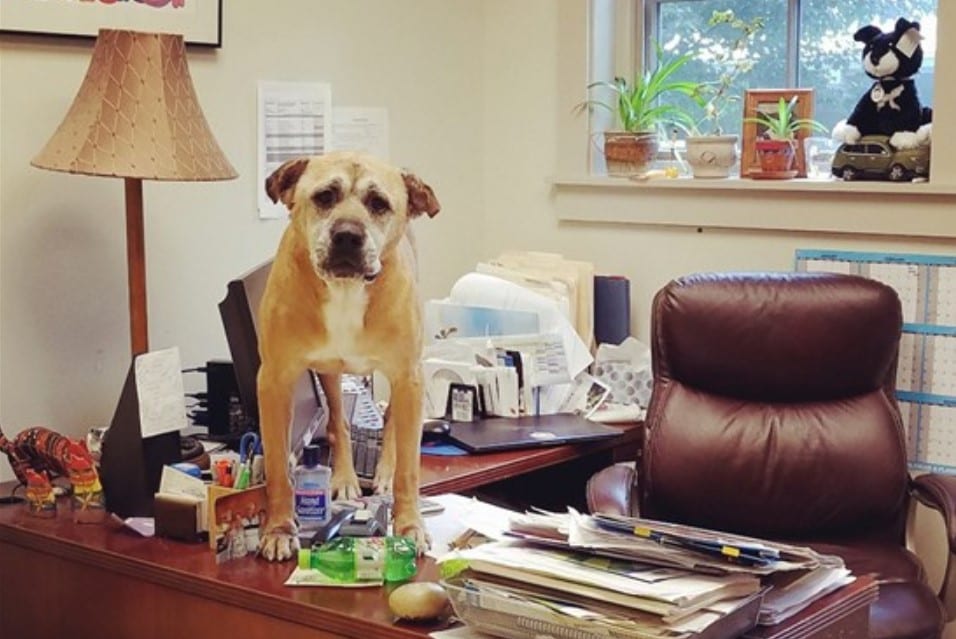 Sam had been returned because she didn’t get along with the other dog in the family. It would be a gamble to have her around other dogs.

On the other hand, Brutus had also been with foster families but had been returned. He displayed severe separation anxiety and had multiple medical issues. Did Leslie want the extra stress?

The Right Place, The Right Time 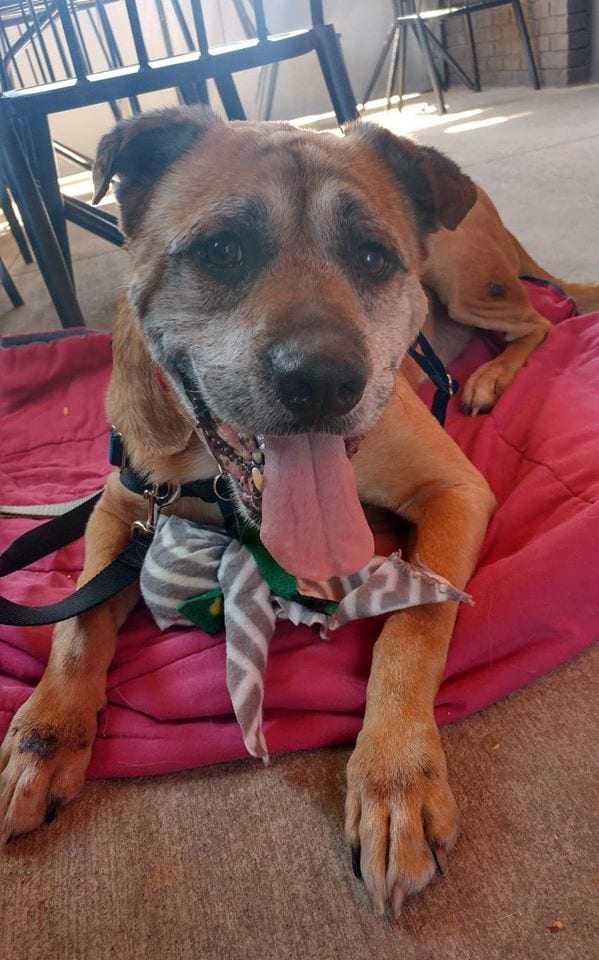 Staff at the shelter tried their best to make sure someone was always with Brutus, but this wasn’t always easy. “One of our staff members let him have a little vacation in her office, so he would have someone to be around instead of being in his kennel,” Meredith explained. 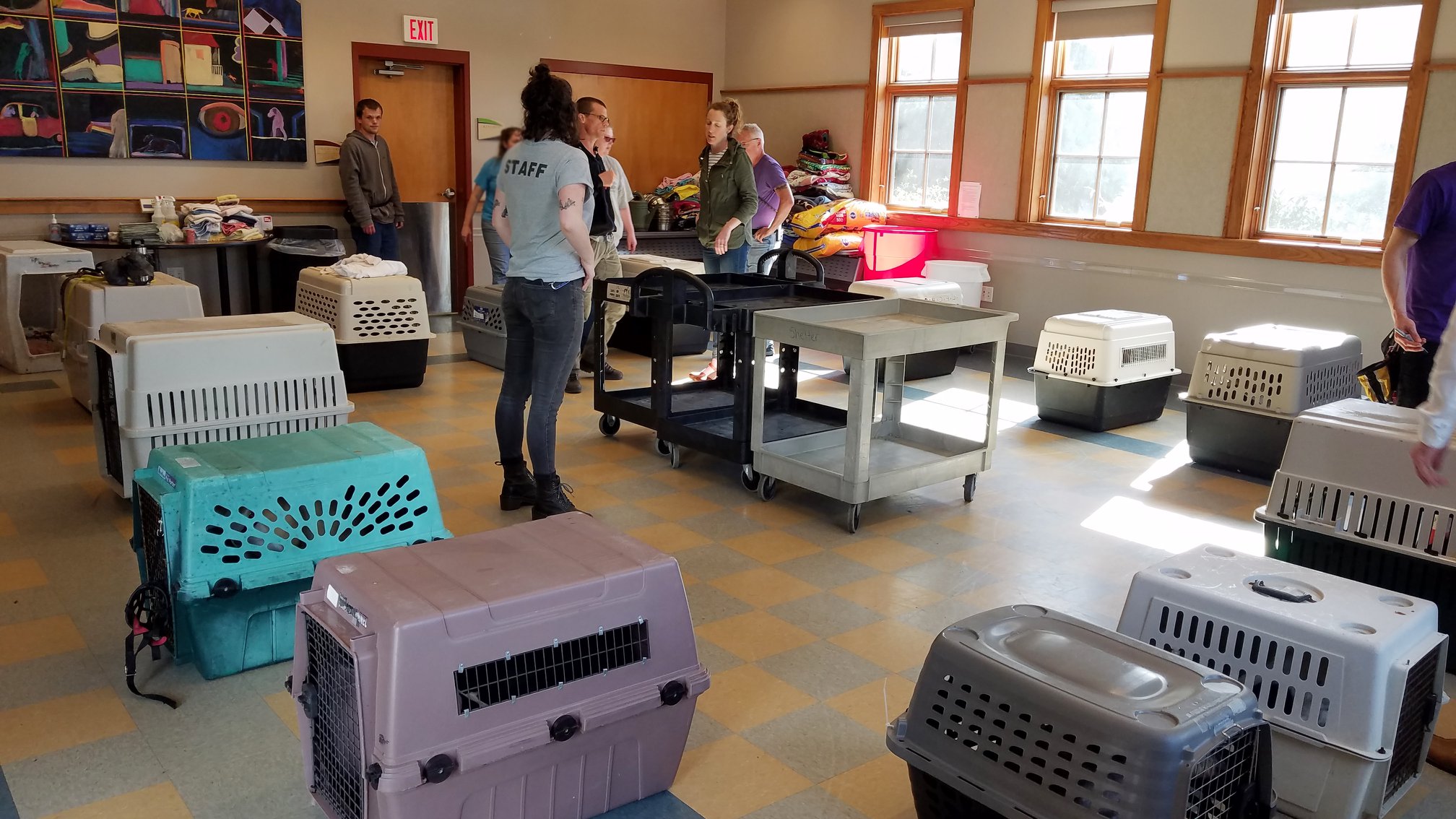 “She (the staff member) had a hankering for something out of the vending machine, so she took him with her — and that’s when Leslie walked in the door!” Meredith said.

But she couldn’t get Sam, the first dog she had met, out of her mind. What would Sam’s fate be if she left her here? 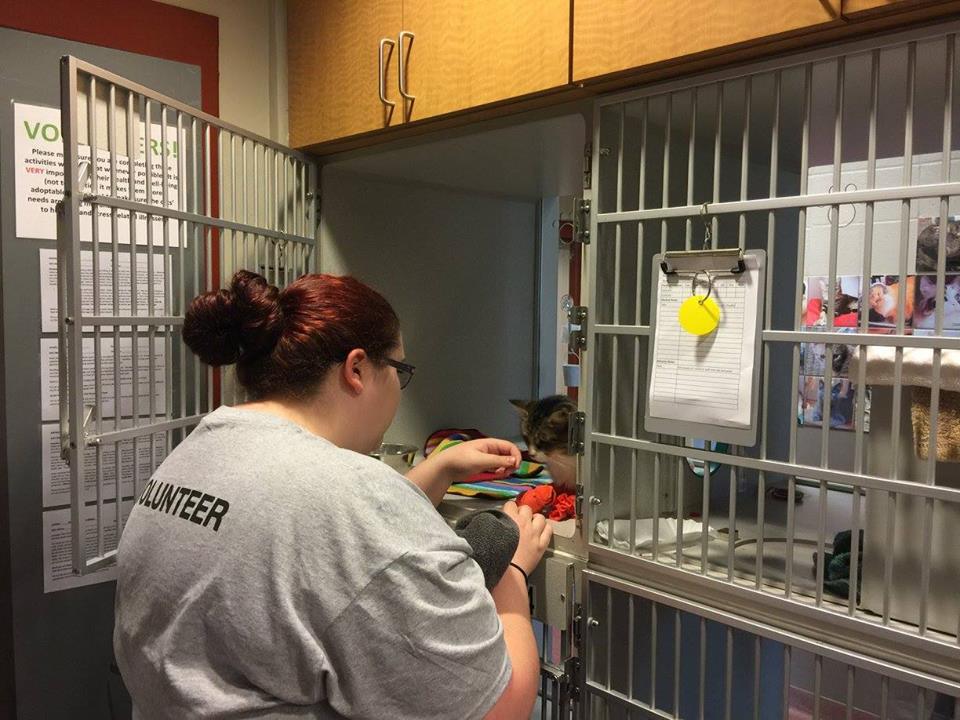 Meredith continues: “She came in saying that she wanted to adopt the longest-staying dog that had special needs, and the staff member was like ‘Here you go! Here’s Brutus!'” He seemed like the perfect candidate and certainly fit the bill.

Staff members had really hoped that she would take Brutus home, but Leslie wasn’t done. 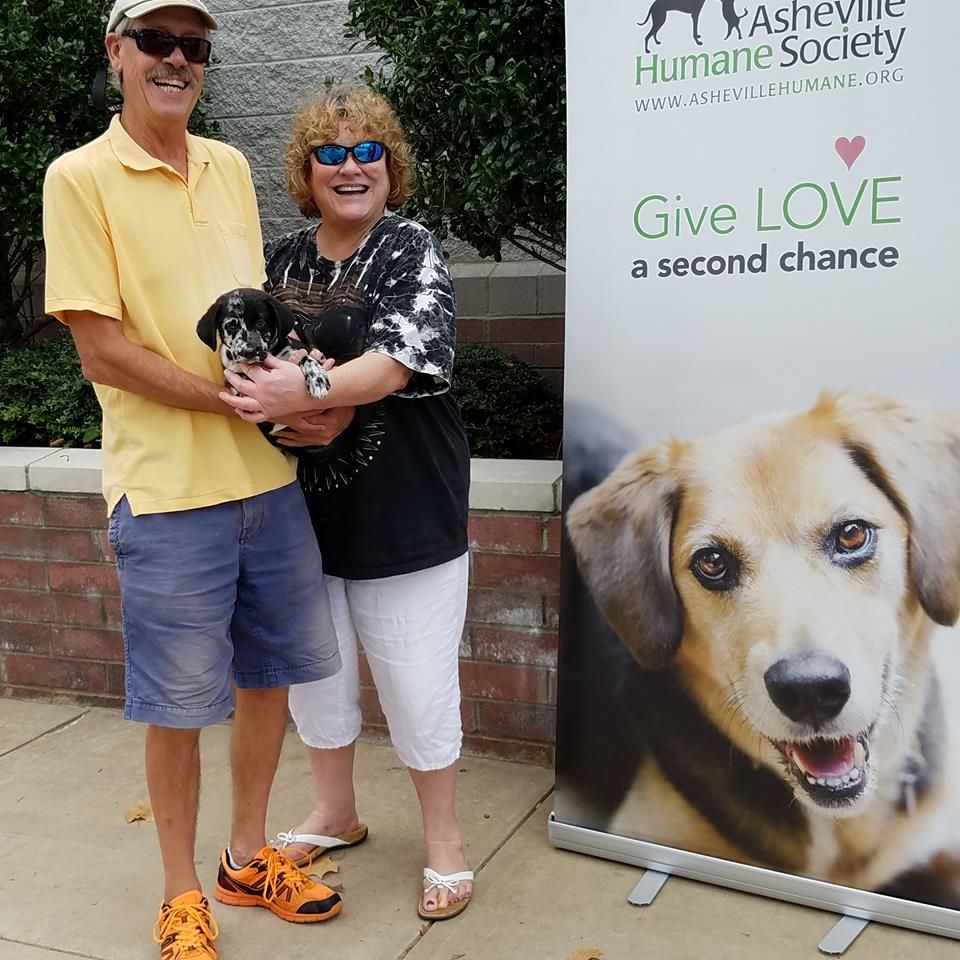 Everyone waited for Leslie to make her decision. Both dogs were close to the shelter worker’s hearts, but in the end, they all had to think about what was best for their new family, too. Who would be left behind? 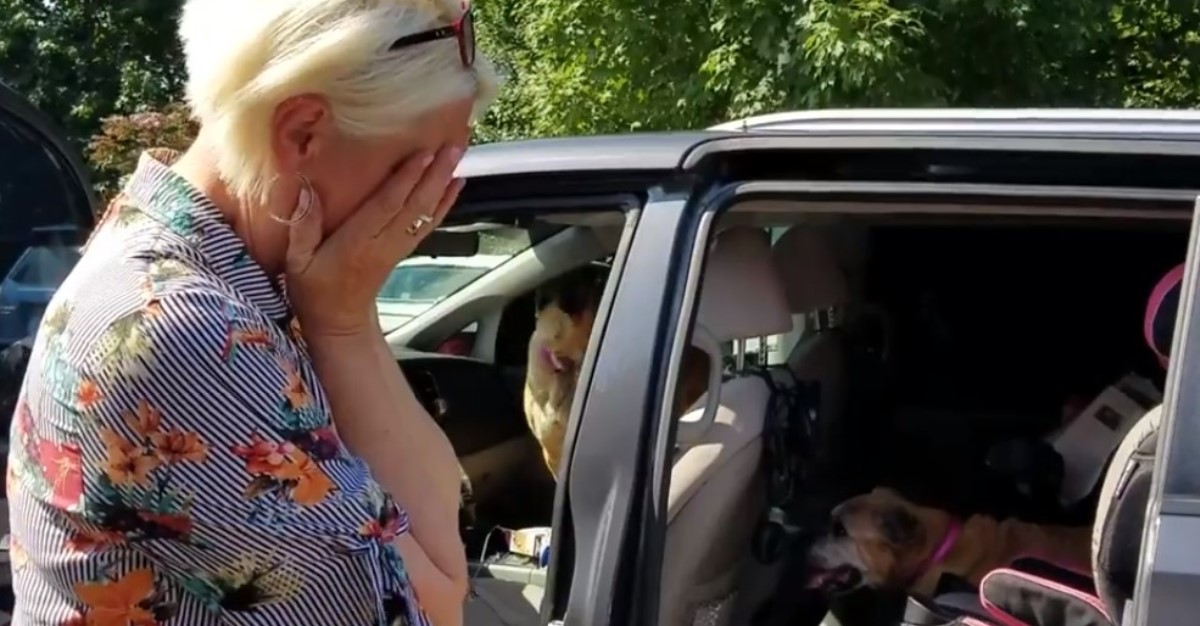 “We couldn’t believe it! We introduced Leslie to Sam (who had extensive medical issues, was with us for 6 months, adopted then returned) and Brutus (who has severe separation anxiety, was with us for 5 months and was originally surrendered to be euthanized at 13 years old).”

She continued: “We vowed to find these two amazing dogs their second chance, no matter how long it took…” 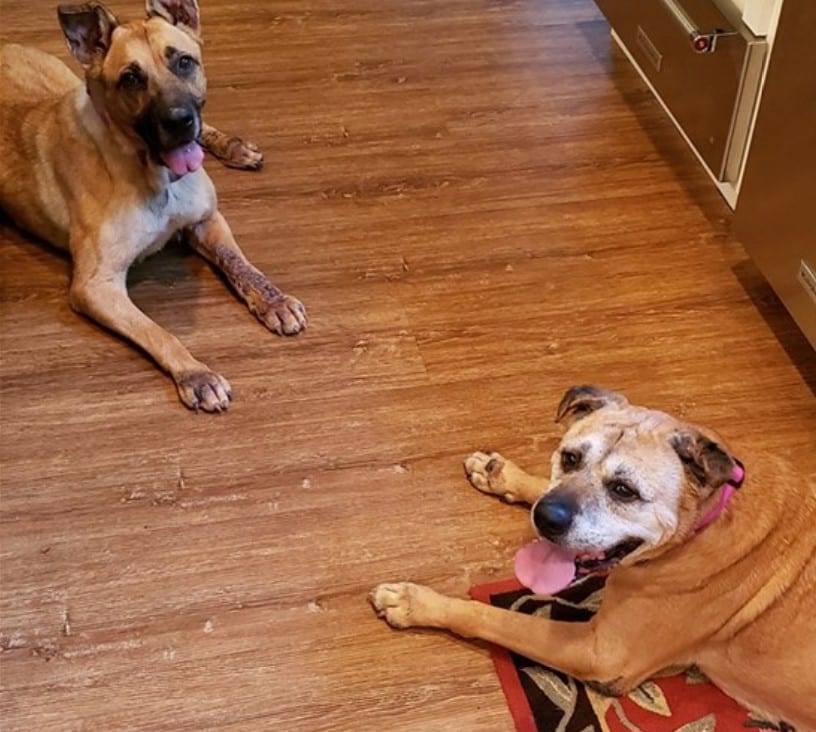 “…TODAY was their special day TOGETHER! Leslie has a three-story house and two acres of fenced-in yard where Sam and Brutus will spend their golden years,” she continued.

“As she walked them to the car, Leslie talked softly to these two sweet souls, with their creaky joints and grey muzzles, who have been through so much hardship. She told both Sam and Brutus that they now had a family to love them for the rest of their days.” 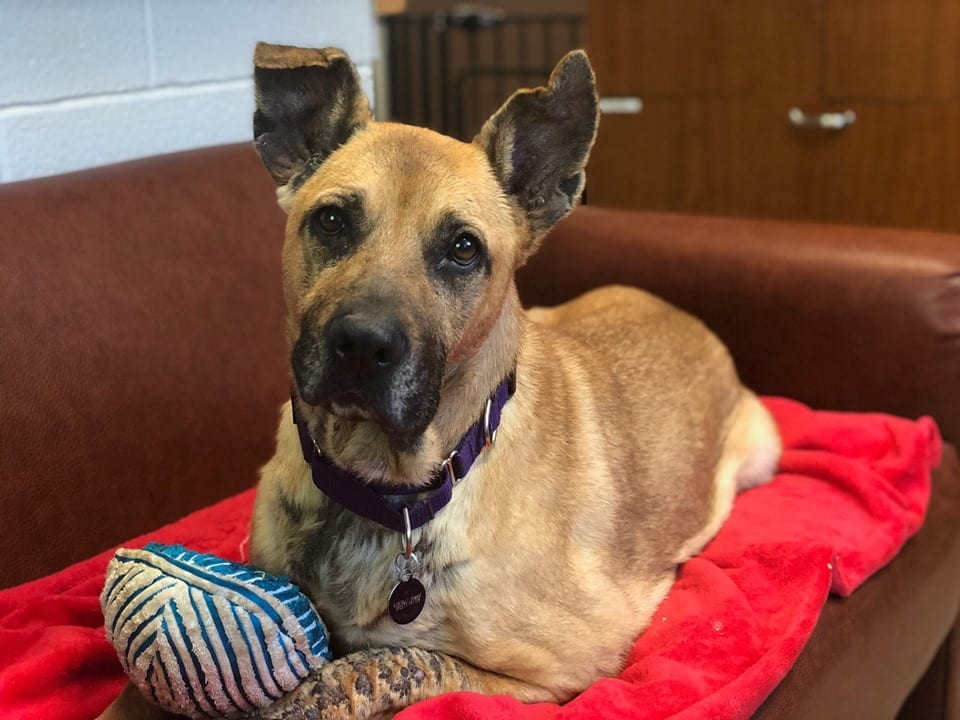 “And Leslie assured Brutus especially, who panics when left behind, that he would never spend another moment alone ever again (Leslie, you have a heart of gold!!!).”

“There wasn’t a dry eye in sight as staff, board members and volunteers gathered to say a bittersweet goodbye to two of our favorite furry friends!” Leslie’s decision had left everyone at a loss for words! 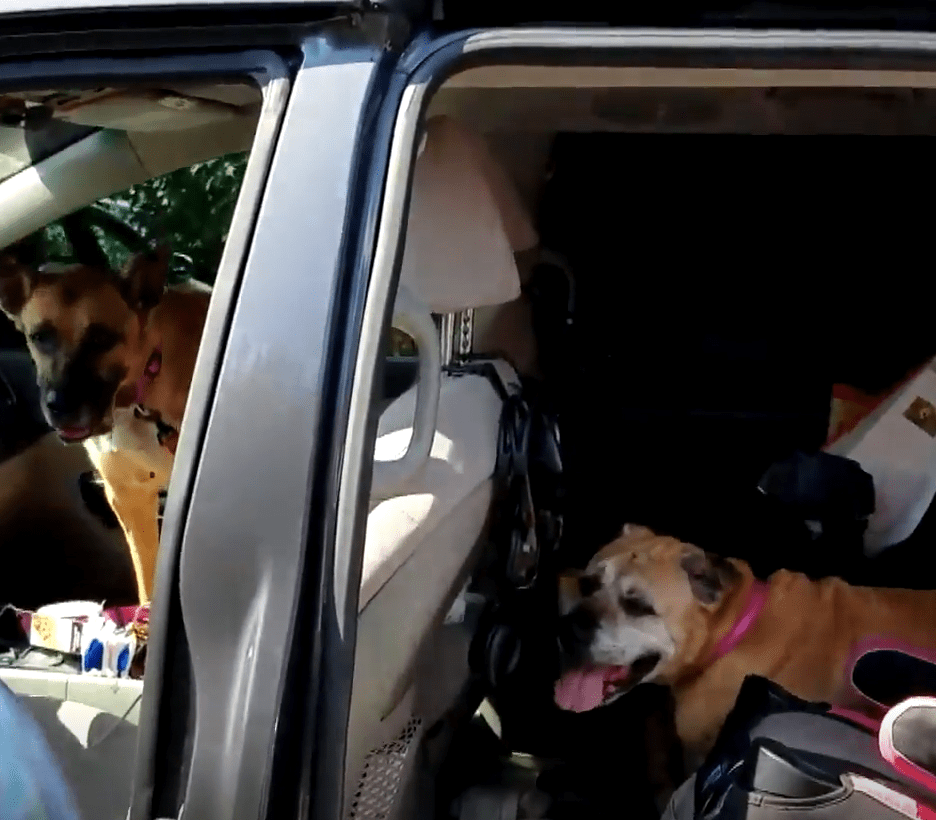 Leslie believes that you can afford to give these dogs the same amount of love they give you in return. And who could be more deserving than Sam and Brutus? They had a rough start to life, but under Leslie’s care they will live out their golden years in comfort.

But this is not the first time Leslie has done something like this. 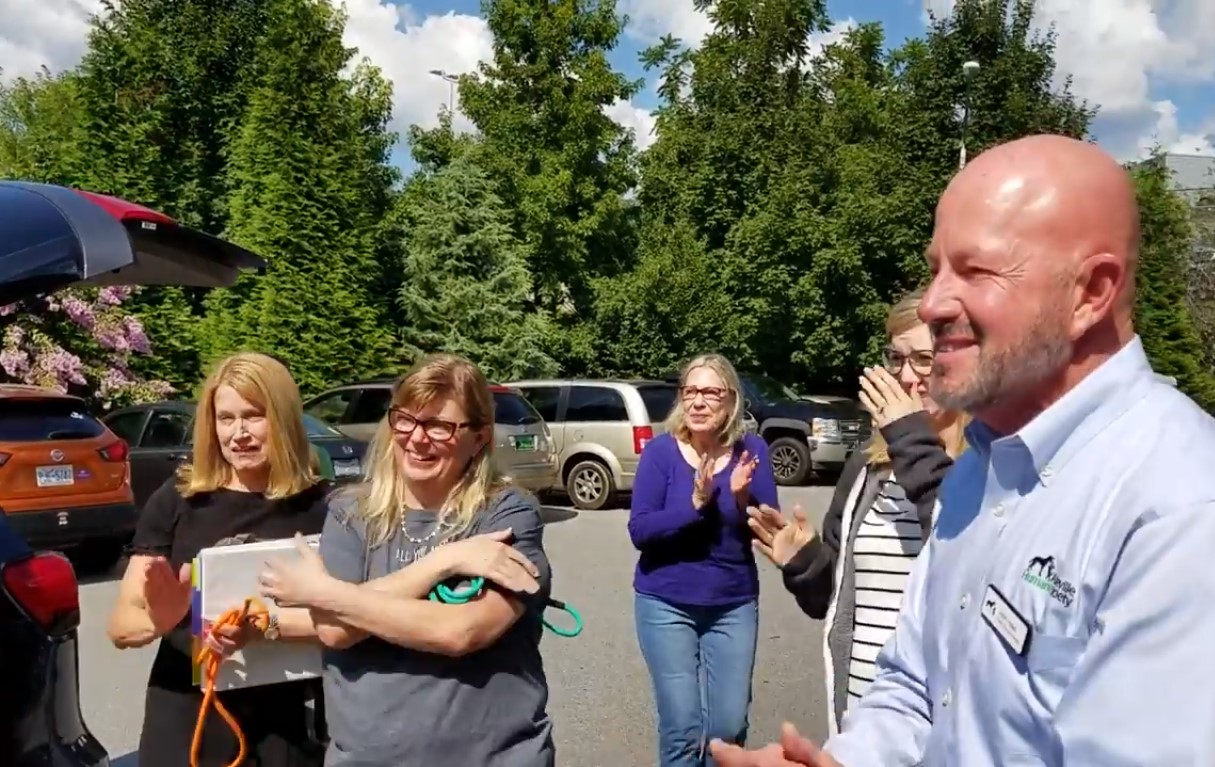 Lesley has adopted over 50 dogs over the years that simply just needed a loving home. The caregivers at the shelter work tirelessly in hopes that someone like Leslie will come along.

Shelters like The Asheville Humane Society rely on people stepping up to offer these animals a home. And with surrenders and abandonment at an all-time high, they need help more than ever. 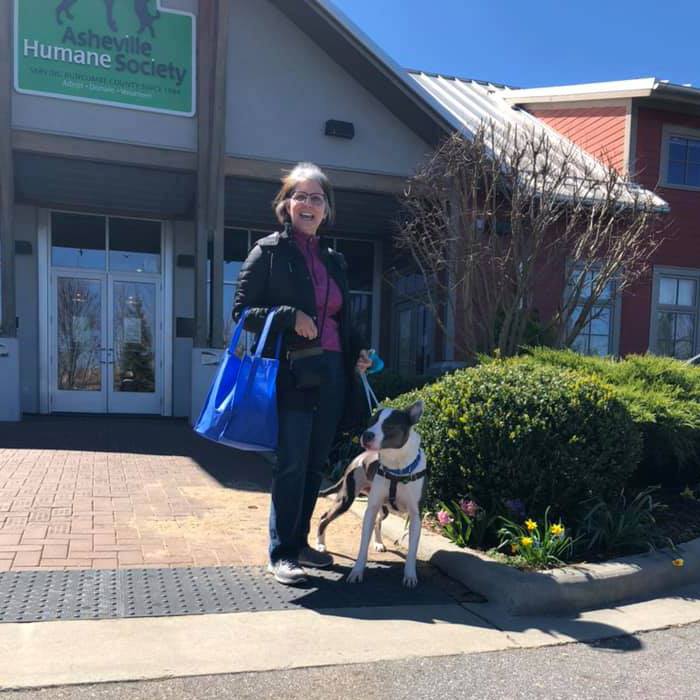 Sam and Brutus were just two of the dogs at the shelter waiting for their forever home. Shelters need all the help they can get, so even if you are unable to adopt, you may be able to foster.

If you are unable to foster, then you can donate, or even just help spread awareness about rescue organizations and the amazing animals waiting for forever homes. 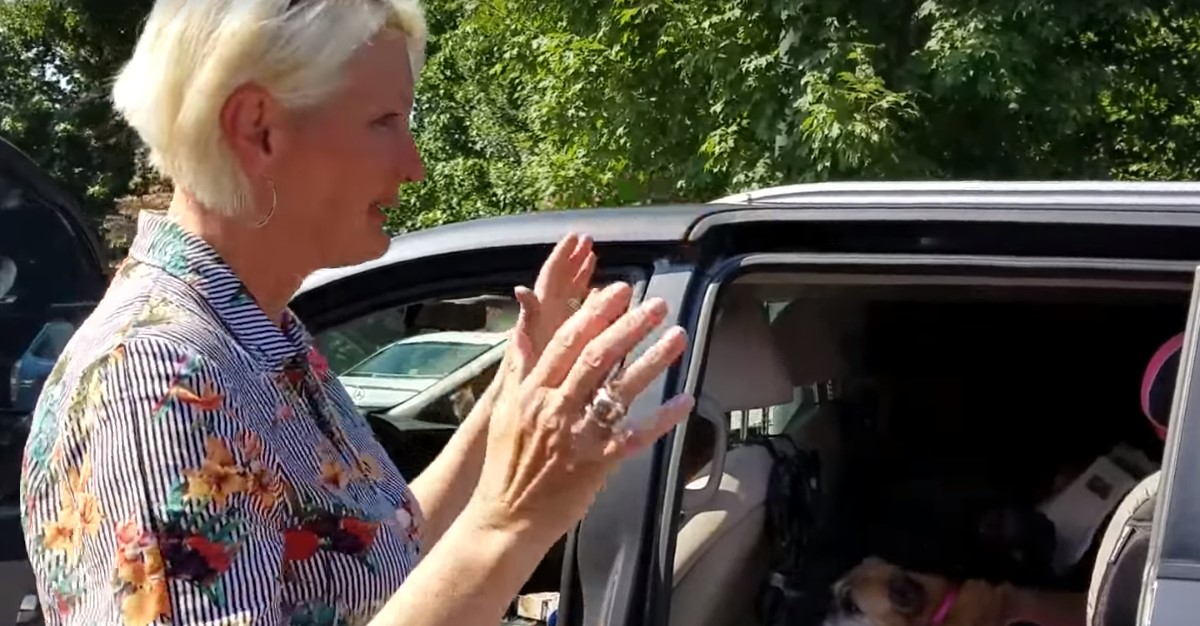 “…this is what PRICELESS love looks like! If their story has touched your heart, PLEASE consider adopting or spreading the word to help the homeless animals who desperately need our support!” Meredith wrote.

“This compassionate community and all of YOU make happy endings like this possible. Sam and Brutus say thank you for their second chance.”

A Second Chance At Love 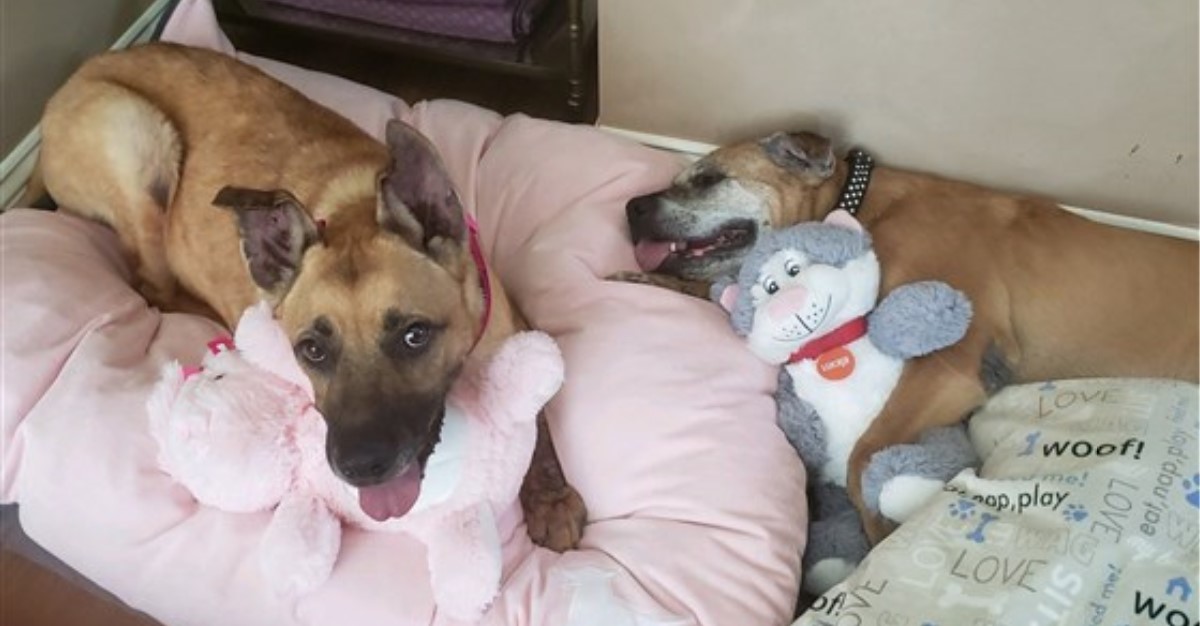 “Sometimes we’ll have the occasional person who has a huge heart, and is like ‘You know, I just want to take home whoever has been here the longest,'” Meredith recalled.

“But this is the first time I’ve ever heard of someone saying ‘Give me your two dogs who have been here the longest with special needs.’ We were all just in shock. It was incredible. It was probably one of the best days we’ve had in a long time.”

Woman Finds Bottle Washed Up on Beach With A Note, Two $1 Bills And A Lot More 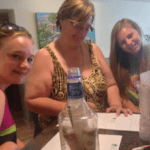