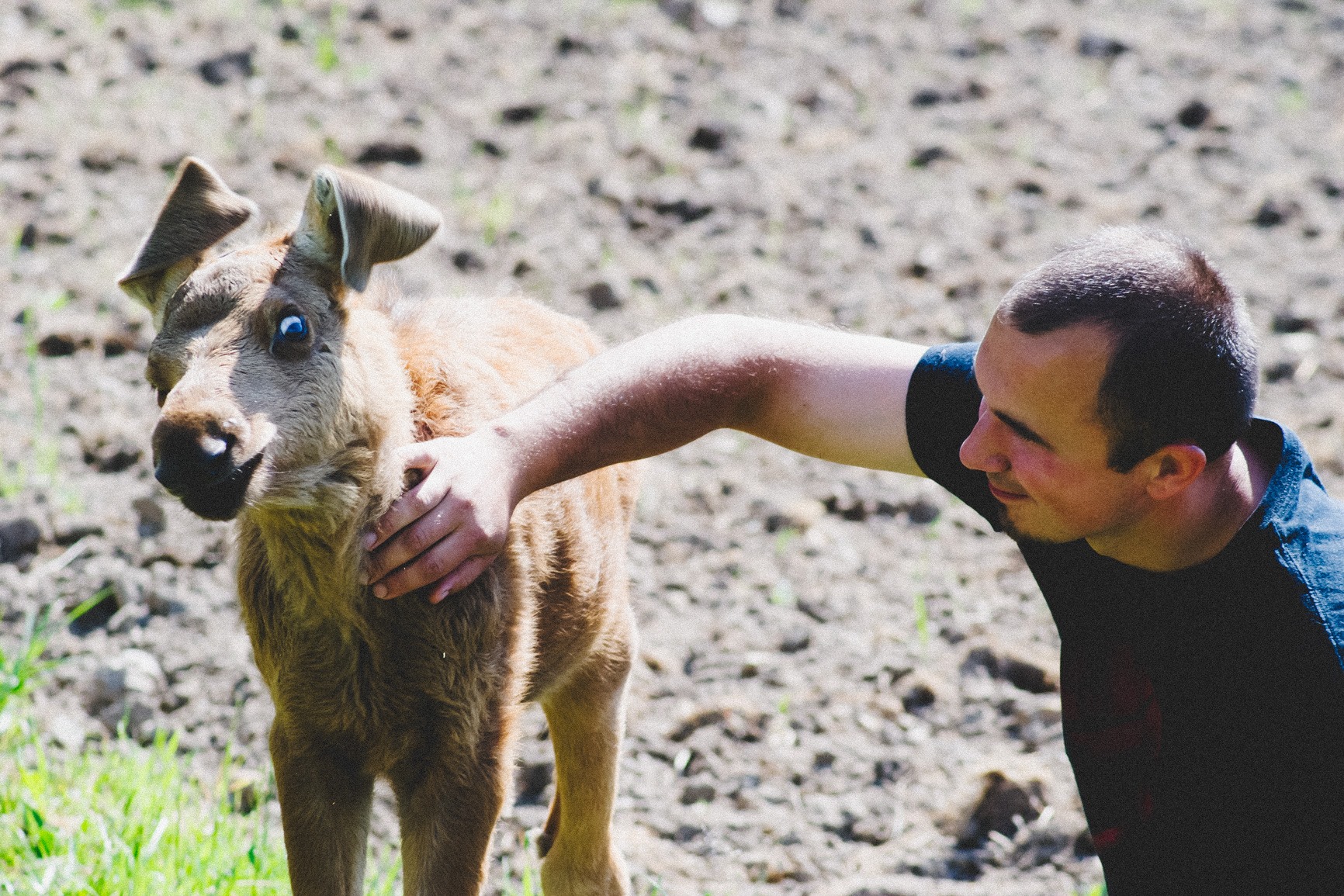 The Experience Of A Lifetime

You probably wouldn’t think moose and humans can get along. Neither did this Lithuanian man, until chance brought him together with an animal that changed his life.

Erikas Plucas is a farmer who lives in Lithuania. His farm sits right next to a forest, so he is very familiar with nature and wild animals. But when he found himself having to take care of an orphaned baby moose, he gained a whole new perspective and – most importantly – a new best friend for life.

One day, Erikas came home to an unexpected sight. A tiny baby moose, laying down by his gate, all alone. He looked around, but there was no mother in sight.

When he got closer, he realized the moose couldn’t be older than 2 weeks. That’s when the tragic reality hit him.

Erikas realized the moose’s mother had probably been killed by hunters, and the baby had run away in search of shelter. But she was not in good condition. She looked starved and downcast, her fur was dirty and full of flies buzzing around her.

Erikas knew she was in desperate need of help or she would die. But she was terrified of him.

Scared as she was, the baby moose was too weak to run away or even stand up. Erikas carefully picked her up and brought her inside his property. He called Animal Services, who told him they’d be there the next day.

In the meantime, he called his friends to ask for advice to help the moose. To his shock, he was met with hostility and contempt.

“‘It is illegal, you should not do it, let nature take care of it’ was all I heard,” said Erikas of his friends’ reaction. Undeterred, he got some milk, went outside and collected every kind of leaf he could find to see if the baby would eat. Then he waited patiently for Animal Services.

Unfortunately, they would end up being of little help.

Nowhere Else For Her To Go

“Since here in Lithuania we do not have a special institution who would take care of wild orphan animals, they called local hunters and asked if they can take her,” Erikas said about his meeting with Animal Services.

He knew giving the moose to hunters would mean certain death for her, so he asked Animal Services if he could keep her. To his relief, they agreed.

Erikas named the baby Emma. The first few weeks were a great challenge, as he recalls. He had to feed her every four hours, and could not leave her alone for too long. She would cry every time he went inside the house. To make her feel safe, he often slept beside her, sometimes in the barn and sometimes out in the open.

As she got better, she started to trust him.

Teaching Her To Be Wild

Emma was getting bigger, but she was no longer afraid of Erikas. He decided to start taking her to the forest, to get her reacquainted with her habitat. She was reluctant at first, but she followed Erikas everywhere. He helped her find food, and tried to teach her what was safe and what was dangerous.

He hoped some day she could do it all on her own. Soon he began to see some progress.

As Emma grew, she began getting more comfortable with the forest. Soon, she started going there on her own. Erikas knew it was time for her to go back to the wild.

He felt like a parent sending his kid off into the world. “I remember those first nights that she didn’t come home,” he said. “Oh, I barely slept.” But he knew he had to let her go.

Now Emma is all grown up, and living in the forest full time. But that doesn’t mean she’s forgotten about the man who saved her live. Every day, she comes by the farm for a few hours to visit Erikas.

He gives her treats, and sometimes they go swimming together. They have a very special bond, reflected in the way she treats him.

Emma never really warmed up to any humans, but with Erikas it’s a whole other story. “To me she is gentle and loving,” he said. “She is very careful when we are playing, so she would not hurt me.”

But now that she is an adult and living on her own, Erikas knew there were other dangers awaiting her.

Erikas knew that, like her mother, Emma could very easily fall prey to hunters roaming the forest. He could not bear the thought of her getting hunted, but he knew she needed to be free.

So, instead of keeping her in his farm, he decided to take a different approach to try to protect her.

Trying For A Miracle

“I had some hunters over for them to see her as not just a nice, warm steak with potatoes and vegetables on the table, but as a very intelligent and loving animal,” said Erikas as he recounted his strategy to convince hunters not to hurt Emma.

He knew it was a long shot, and he was surprised to see it had worked.

After talking to Erikas and seeing the relationship he had with Emma, the hunters agreed not to hunt her. Some went further, saying they would never shoot a moose again, while others even promised to put down their rifles for good.

That was excellent news for Erikas, who suspected Emma would soon have a family of her own.

A Bond Unlike Any Other

In her more recent visits to his farm, Erikas noticed Emma’s tummy getting bigger and rounder, leading him to think she was pregnant. That’s when he knew she was not only at home, but thriving.

But he knows their bond will never fade away. “I’m her world now and she is mine,” Erikas said. “Sometimes I wonder was it me who saved her, or is it the other way around?”