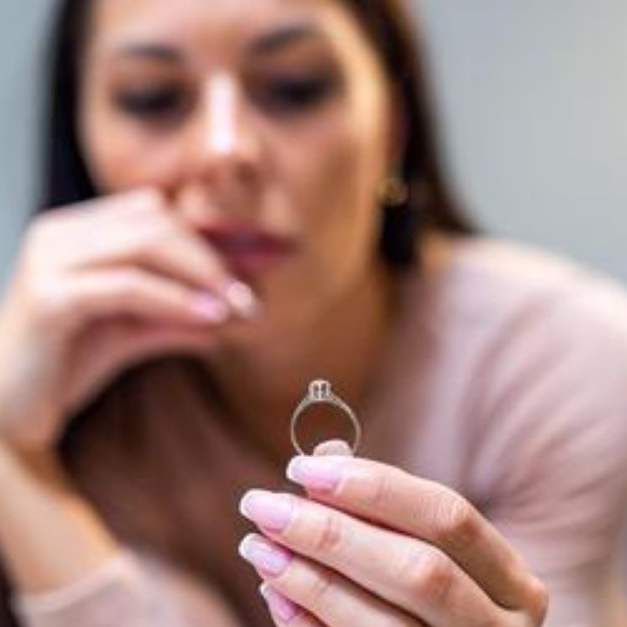 She stared at the Facebook message, felling like her already-shattered heart was being pulled through her chest and shoved into a blender.

We they serious? Did they actually want her rings back?! But just when she thought that was the worst of the messages, the next one slapped her hard across the face.

Julie remembered the day her and Daniel had met.

She had been enthralled with his beautiful eyes and stunning smile. But it was his personality that sealed the deal. He was kind, romantic, and hardworking in all aspects of life – especially their relationships. It had been a hard road for Julie before Daniel.

She hated the dating scene with a passion.

It had been nothing but a long string of users and losers who only wanted her to be their maid or mum. So, when she got to known Daniel, she knew without a doubt that he was a keeper. It seemed like the stars had finally aligned. …But it wouldn’t last.

It had been 6 glorious years. She had plenty of interactions with his family.

They seemed pleasant enough – although there was regular pressure to get married and have children. At least when year-7 came along, they got they wedding they, as well as her and Daniel, wanted. But there were also odd stares.

Going With The Flow

They were mostly from Daniel’s mother and sister.

There were the expected jabs about starting a family immediately. But they both explained again that they weren’t in a rush. It would happen when the time was right. It was the lingering gaze on her rings that made her confused.

Her engagement ring and wedding band set were stunning.

It was far more than she had ever expected, and yet another sign of her husband’s generosity. But the two women looked at the bands with what could only be described as veiled disdain. It happened again one year later.

Daniel gifted her an eternity band for their one-year wedding anniversary.

Life was amazing. Granted, they had their arguments like any couple, but through communication and compassion, they always got through it and ended up better for it. Then came the accident.

It came out of the middle of nowhere.

Daniel had left that day to go to work. She was going to spend her day off puttering around the house, maybe trying a new recipe or catching up on errands. Then she got the phone call. Her beloved husband had passed away.

It was like someone had set a match her entire life.

The pain was indescribable. It hurt right down to her soul. It froze her lungs and made her tears feel like acid was pouring down her cheeks. Even the funeral was a torturous blur. Another blow would come 6 months later.

Julie opened Facebook, figuring it was time to reach out to some of her friends she had disconnected from.

But there, in the middle of her message in-box was a note from her sister-in-law. She couldn’t believe was she was seeing. They wanted the rings back!

Anger and confuse mixed with her tears.

She had already given them back all his possessions and photos from before they had met. The only thing she kept were pictures of their relationship, a few of his clothes, some sentimental items, and the rings. What were they thinking?!

Prefer To Keep Them

Julie pulled at every last ounce of strength to explain how they were part of their marriage.

She wanted to keep them. The entire situation was devastating, but they only got worse when the sister-in-law threatened to hire a lawyer!

One thought stuck in her mind … but it was something even she had a hard time believing.

Julie knew everyone was hurting. But she had given back everything that the family had wanted. She also knew she was too much of an “over-sharer” on her social media. It was ages ago, but she had mentioned how much the rings had cost.

The estimated value was over $20k. Were they really “gold digging” through a passed-away family member?!

It was the only explanation. Even thought Julie was drowning in a flood of unbearable emotions, she knew she had to try and keep calm. It was time to ask for outside advice.

It might not have been a professional place to see advice, but she knew without a doubt that Reddit commenters would be brutally honest.

They also wouldn’t just accept her story at face value. They would ask questions and give her every perspective. She posted the situation in the AITA section. The answers came flooding in.

“Asking for a widow’s wedding rings six months after losing her husband is deeply messed up.”

Also, “I’d cut ALL ties with these people. Let your AH SIL get a lawyer, it will be a waste of her money because those rings are YOURS, they were gifts.”

“These people are disgusting. They aren’t family heirlooms, they’re just nice things they want to be able to pawn. Block all of them.”

New information came in and Julie added it. Her ex-Sil was now calling her all sort of horrible names and say she wasn’t part of the family anymore.

“Umm, what? Yeah, he paid for them … as gifts for you. And as you were his spouse, his assets go to you anyway unless he had a will that states otherwise.” and “Where are these people getting the idea they have any claim over anything of his, much less something as sentimental as wedding and engagement rings.”

That was that. Her ex-family wanted to slowly squeeze her until she caved in.

But she wouldn’t. It wasn’t about the money for her. It was about the years of memories with the love of her life. If they couldn’t see that, it was their problem. And if they said she was “kicked out of the family,” it made her realize another truth.

They had never really considered her family in the first place.

Going on with life was going to be a miserable journey, but at least she had a few years of genuine happiness with a wonderful man. She was also incredibly grateful for the “block” button.