Heartwarming War Photos That Were Withheld From the Public 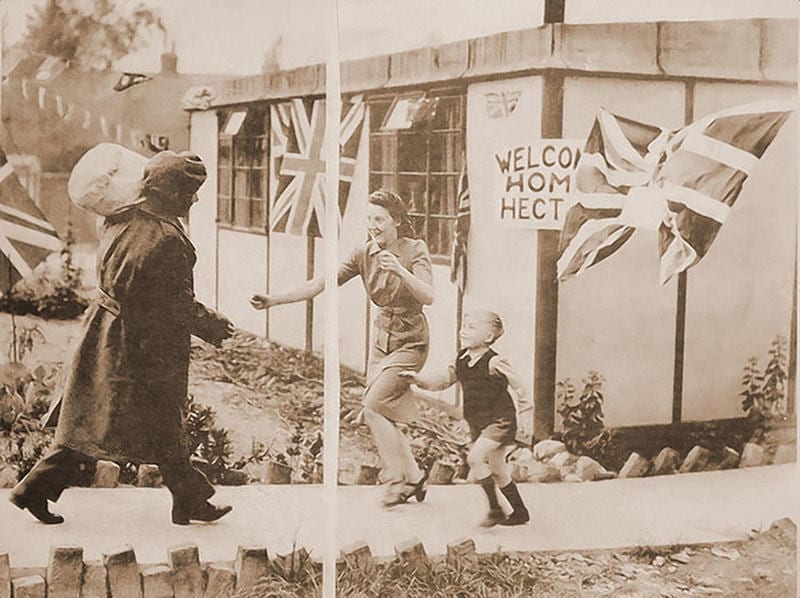 Even during catastrophes and in the darkest of times, humanity always finds it in its heart to show love, hope, and kindness. We can see this even through war photos.

When we think of warfare, images of doom, death, and destruction always come to our minds. Countless people have lost their lives or their loved ones to wars. Families have been separated due to political conflicts. Many countries have been damaged beyond repair due to bombings. However, the human spirit has shown over and over again that it never breaks when facing these calamities, and we have war photos that prove it.

These war photos have been captured at the right moment, showing us another reality of wars: the happy family reunions, the friendships between locals and soldiers, the tributes paid to fallen soldiers, and the celebrations of peace.

Read on to discover the war photos that show another side of history — one that will put a smile on your face. 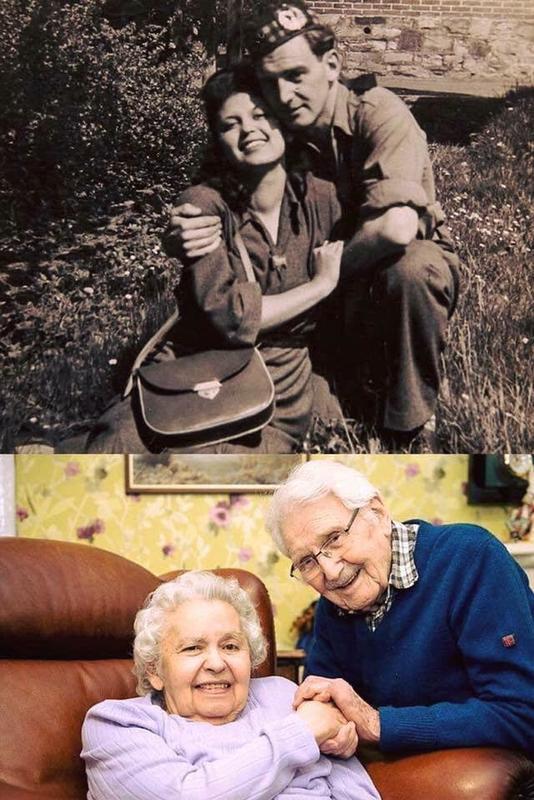 Meet Edith Steiner and John McKay. The first photo was taken when they were in their 20s after they met at a local dance organized by the Allied troops.

John McKay was a Scottish soldier who saved Edith Steiner from Auschwitz. Two years after taking this photo, the couple moved to Scotland and started their family. 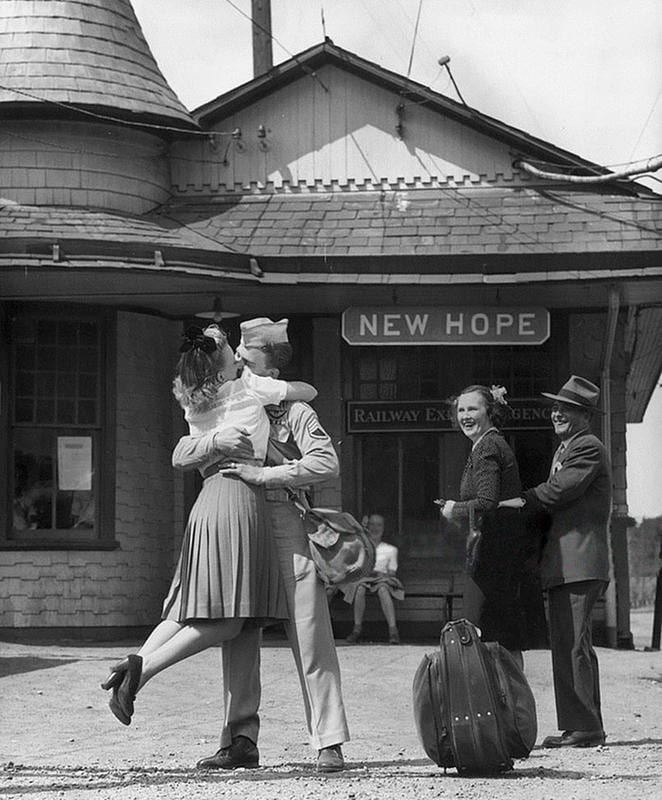 This is what we call a perfectly timed picture.

The mid-air kiss, the bypassers’ genuine smiles, and the “New Hope” sign make this one of the best war photos. 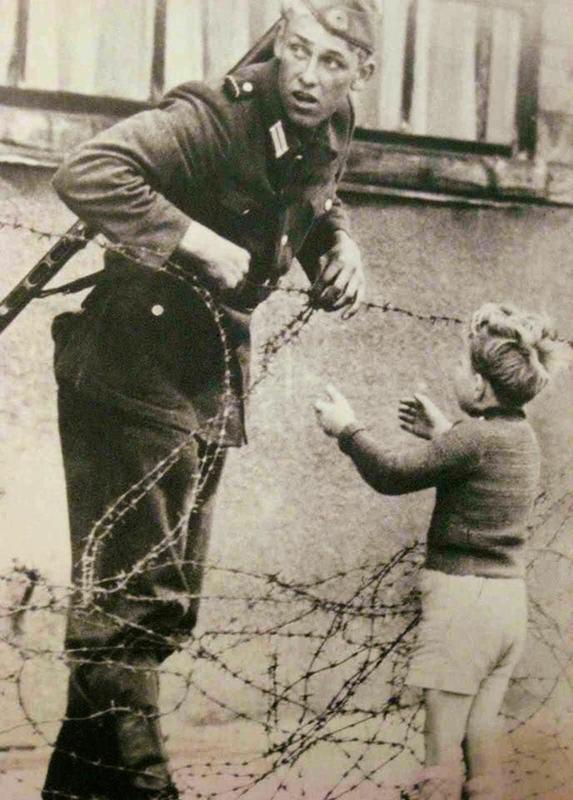 The early version of the Berlin Wall was a barbed-wire wall that divided Berlin in two. It was also one of the only places for people to flee from East to West Berlin, even if it was strictly prohibited.

Despite the direct orders not to let anyone pass the border, this German soldier decided to help a little boy cross to the other side to join his family. 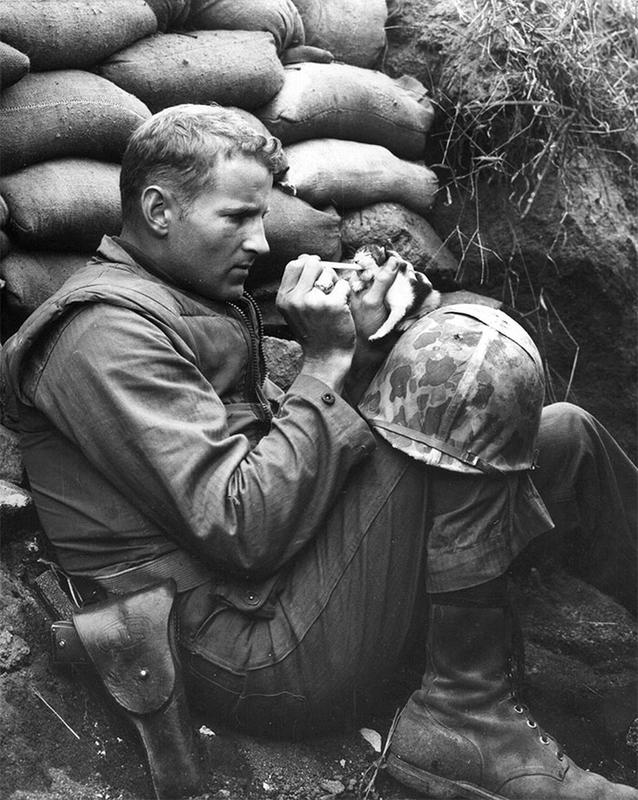 When combat correspondent Frank Praytor met this newborn cat, he couldn’t let it go without nursing it.

At the time this picture was taken, Praytor was working with the 1st Marine Division during the Korean War. Later on, he and Mis Hap the cat became widely famous. He received thousands of letters, including marriage proposals, after it was published. 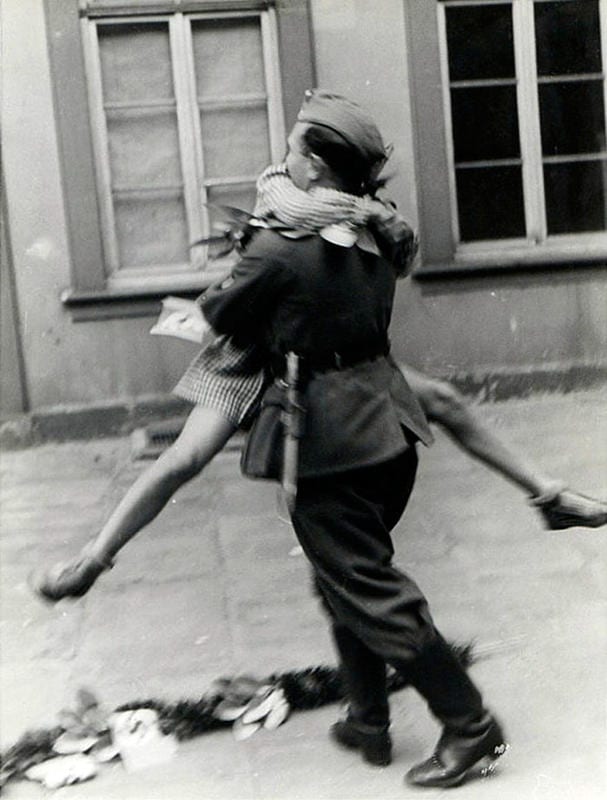 Saying welcome to a spouse after they have left for war is a wish many carried in their hearts for years.

So when it happens, like here after the end of WWII, we can only imagine how happy they must have been. 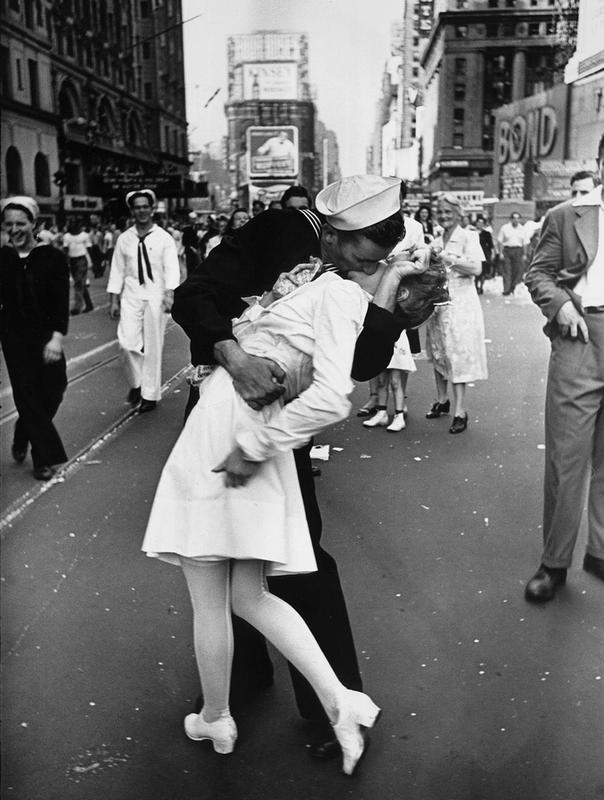 Many war photos became widely known to the public after a few years thanks to the internet, but few got as much coverage as this iconic picture.

It was taken on August 14, 1945, in Times Square, New York, by Alfred Eisenstaedt and later published by LIFE magazine. Many people came forward claiming it was them in the picture. No one can know for sure though, as the photographer didn’t ask for the names of the strangers in the image. 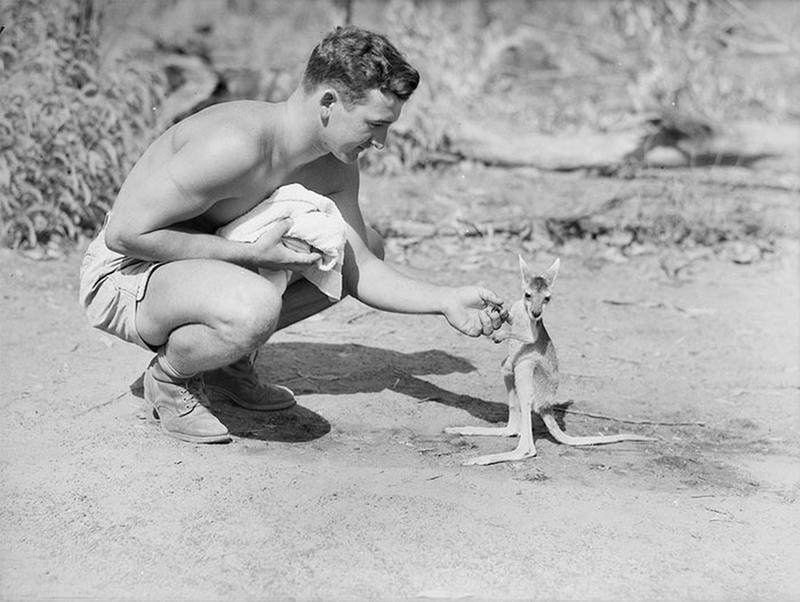 When this American soldier found himself at an Advanced Allied base in Australia, he was keen to make the acquaintance of his neighbors, including this young kangaroo.

This photograph was taken in 1942 by Earl McNeil. 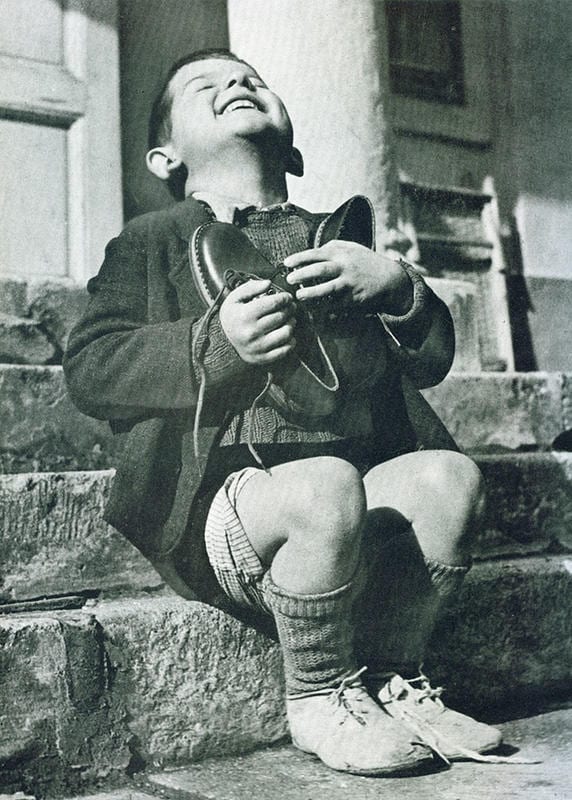 During the war, resources are scarce, so getting a new pair of shoes is a treat.

The gleeful expression of this six-year-old Austrian boy shows it all. Gerald Waller took this picture and published it in LIFE magazine in December 1946. 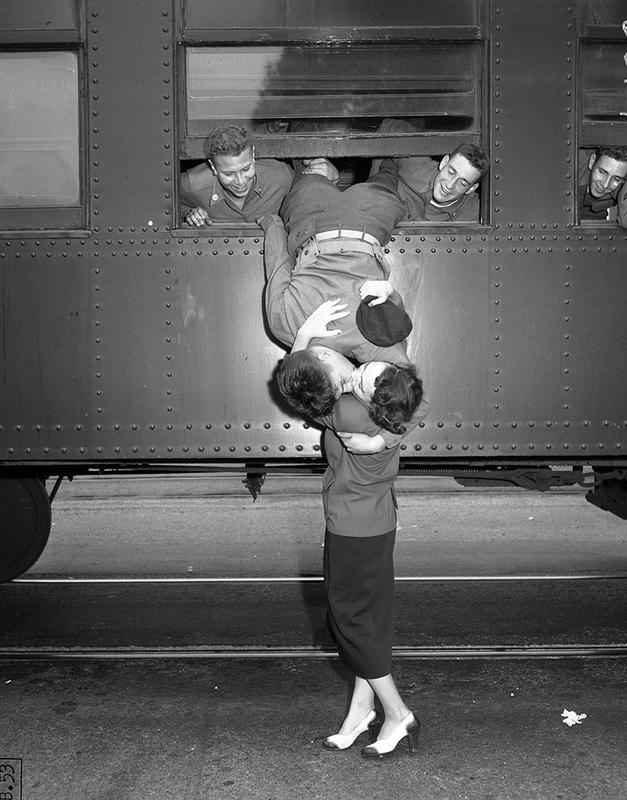 Soldiers boarded this train to join the Korean War on September 6, 1950.

With so many soldiers not knowing whether they will come back, saying goodbye was heart-wrenching. It only makes sense that they cherished every single second of it, even if that meant hanging from a train window. 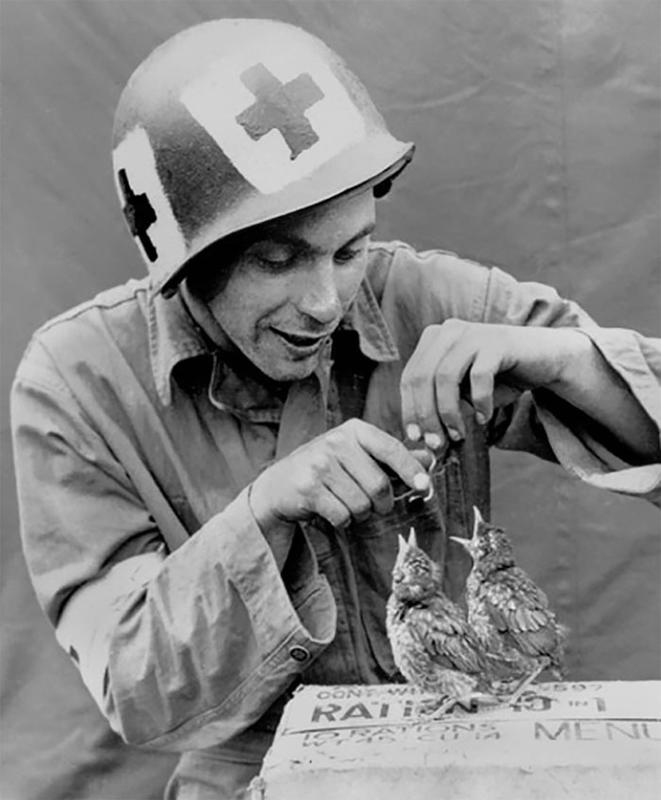 Caring for all creatures must have been this U.S. medic’s motto.

He was part of the 45th Medical Battalion during World War II and cared for soldiers’ injuries. He also took the time to feed a couple of birds. 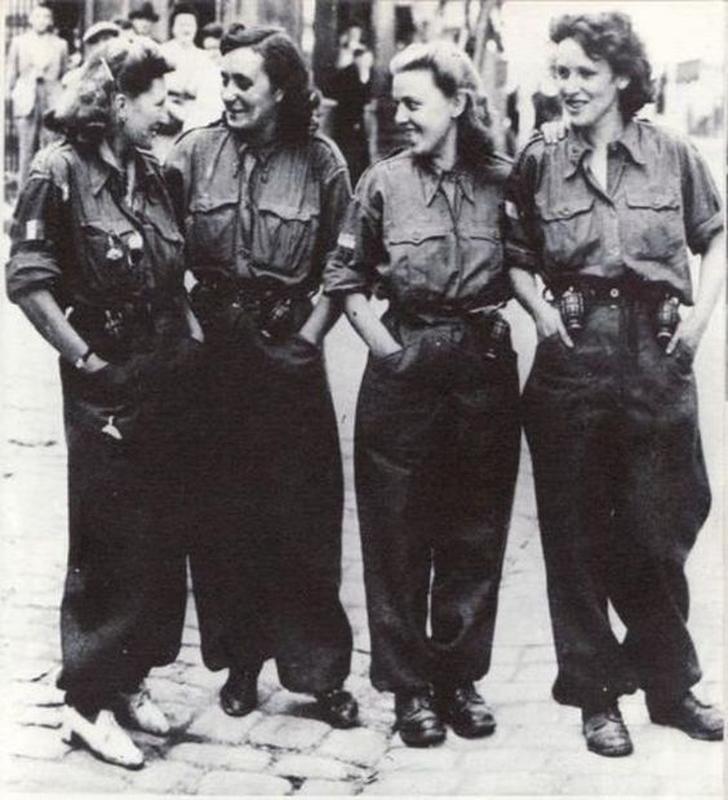 Women heavily took part in military duties and participated actively in the socioeconomic development of the country. 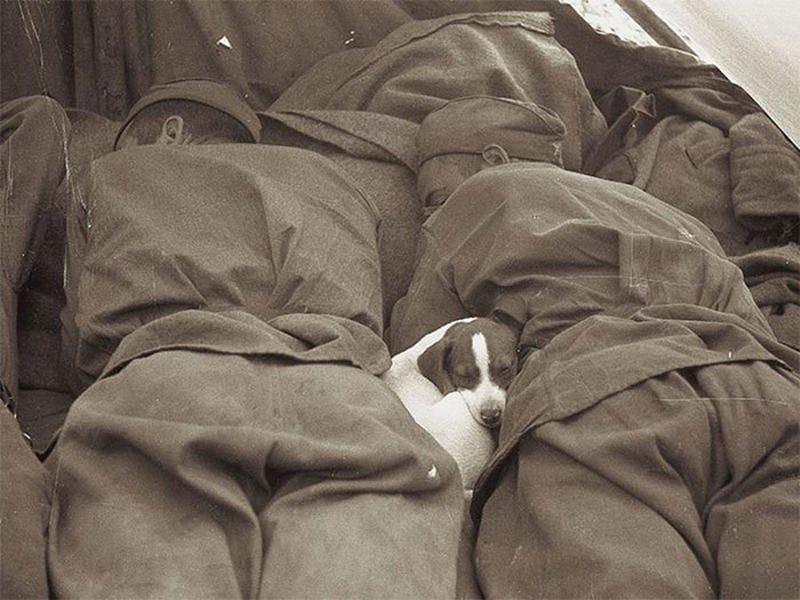 A blissful sleep, even if short, is undoubtedly one of the few moments a soldier gets to relax and recharge.

In this picture, Russian soldiers and their furry friend have some shut-eye at the end of World War II in December 1945. 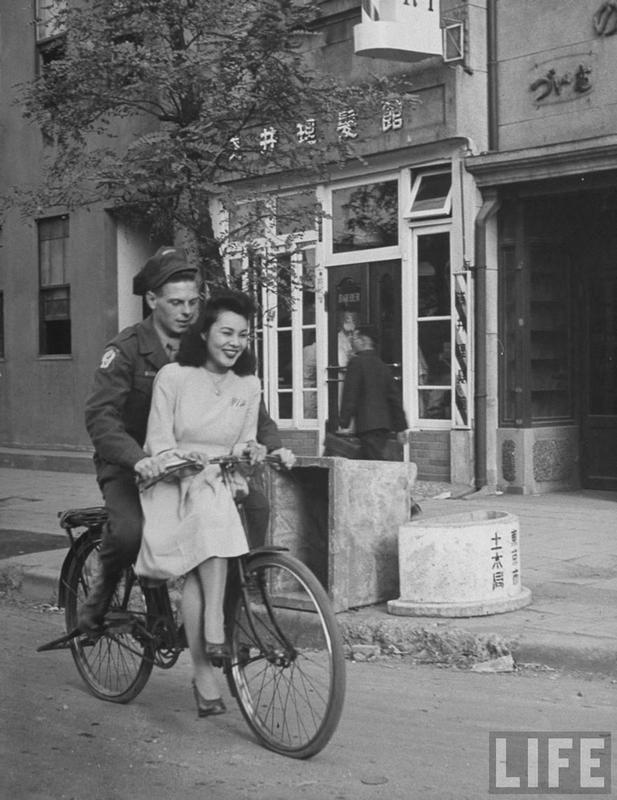 LIFE published many stirring war photos, like this one from December 1946’s issue.

After the end of WWII, the U.S. occupied Japan, and the two parties started mingling. Although this fraternization was strictly monitored, it didn’t stop people from falling in love.

In this picture, we can see the soldier Robert Gray riding a bicycle with actress Hariko Wakaru, both happy to be spending time together. 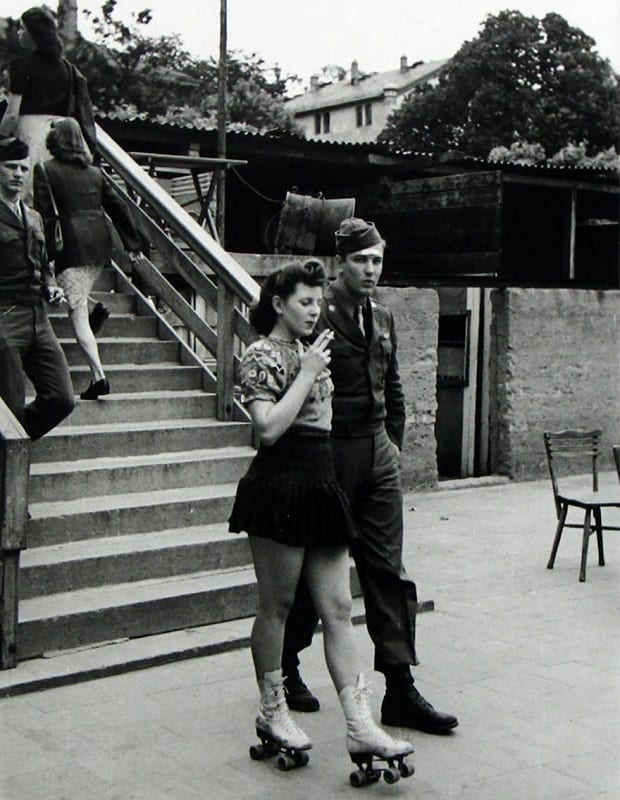 Roller skating hit the pinnacle of fame between 1935 and the ’60s.

So, it wasn’t unusual to see someone blazing their roller skates on the streets. The confident posture of the lady and the piercing look of the soldier is what sets this picture apart from the rest. 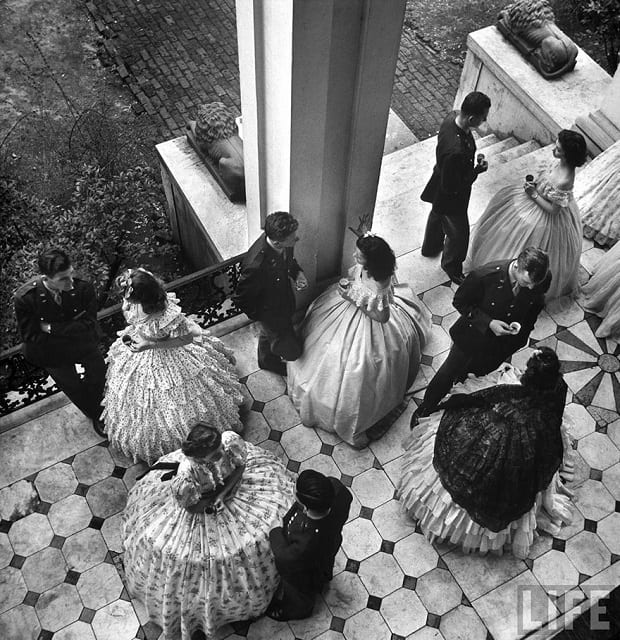 This picture of the Antebellum mansion serving coffee at a party for the cadets from the local Army Flying School is surely one of the fanciest photos we’ve seen. 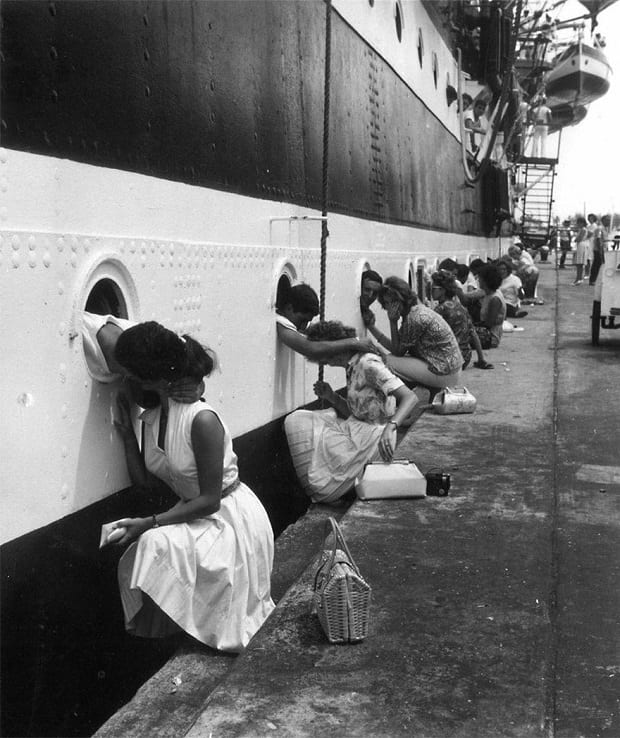 It’s hard to imagine the conversations between these couples. Between murmured hopes and whispered wishes, every smile hides the dread of an unforeseen future.

These lads were getting ready to be deployed to Egypt in 1963 after the start of the North Yemen Civil.

4.) A Tribute to All Fallen Heroes 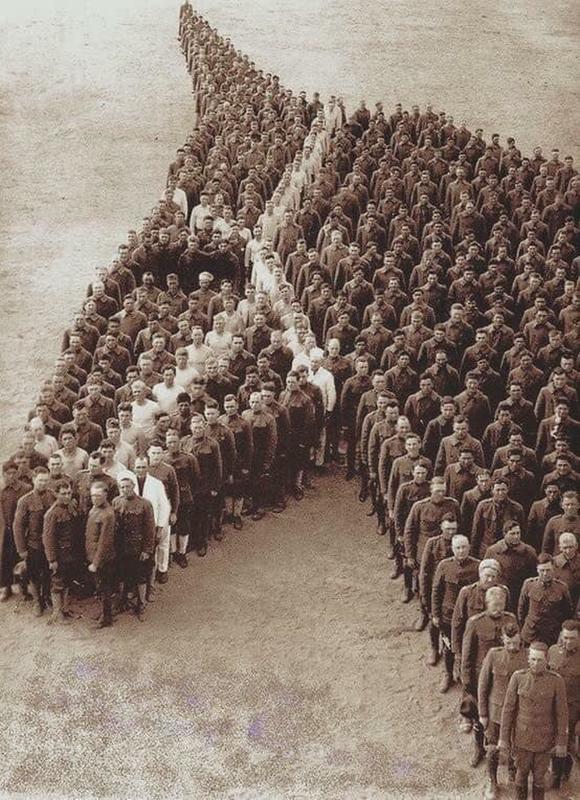 There were many damages besides human casualties during World War I. The four-legged companions of soldiers and troops also fell victims to the horrors inflicted by the war.

To honor their faithful service, the officers of the Auxiliary Remount Dept. No 326 at Camp Cody in New Mexico took this picture. The 650 soldiers gathered in 1915 and formed a shape that resembles a horse’s head.

3.) When the Past Meets the Present 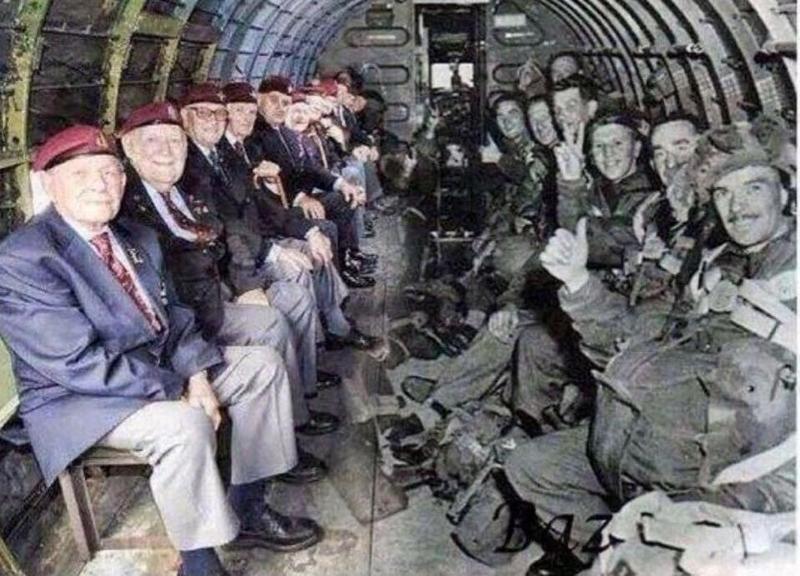 “Operation Neptune” was truly historic. It was the day the Allied forces invaded German-occupied France from the Normandy’s beach landings.

On June 6, 1994, these British paratroopers participated in what would become later one of the most important events leading to the Allied victories. On the left half of the picture, we can see them reenacting the scene decades later in a surreal past vs. present moment. How would you feel if you came back from an assignment in Singapore to a big “Welcome Home” sign hanging and a spouse and a kid running to your arms? Ecstatic? Happy beyond belief?

Well, this is what Gunner Hector Morgan experienced when he came back to England at the end of WWII. What a joyful reunion! This has to be one of our favorite war photos for the simple reason that it announces a new era of peace.

What do you think of these heartwarming war photos? While the pictures of our article feature long wars with heavy casualties, some wars were short-lived. To know more about them, read our next article.

Heartwarming War Photos That Were Withheld From the Public