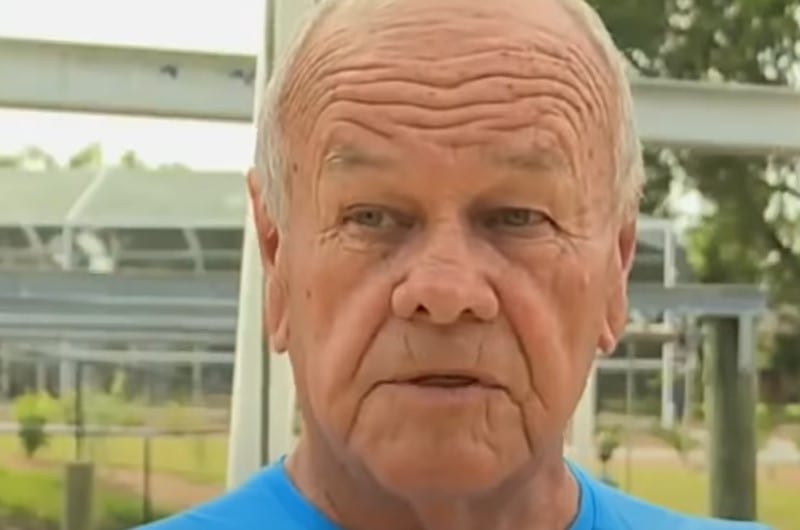 They would learn to regret it if they decided to set a foot on his property again. He was tired of their arrogance and would be tested for the last time.

Seething, he stomped back up the drive. As a cop, he had seen many things in his life. But when he saw what his neighbors had done this time, something inside of him snapped. He balled his fists to stop himself from shaking with rage.

“This is war,” he whispered through gritted teeth. They thought they had bested him. But they had another thing coming.

David Ellis lived in a small and private neighborhood. He’d served his community for four decades as a dedicated officer of the law at the Los Angeles Police Department.

Now, in what were supposed to be his golden years, he had traded his badge for a garden trowel on weekends and tended to his beloved garden with just as much care. But something was about to rudely jolt the usually mild-mannered man right to the end of his tether.

Every weekend, David would lovingly trim and shape the decades-old cypress trees that bordered the small fence that surrounded his property. This mechanical activity calmed his mind after a heavy week of law enforcement. But it wasn’t long before some audacious neighbor ruined this hobby for him, too.

David and his neighbors — who were all distantly related — had been locked in a bitter battle for decades, and he’d been more than accommodating. But this was the last straw.

The crux of the ongoing drama centered around the gravel road that bordered David’s property. For years, David had taken it upon himself to personally fix the potholes that seemed to form overnight.

Being a conscientious neighbor, he constantly worried that there would be an accident. He didn’t want to see anybody get hurt. But his neighbors had other ideas…

“Everybody here is a complete nutjob,” said David’s daughter, who couldn’t remember a time when the neighbors weren’t in dispute with her father. She begged him to find a way to end the drama.

But, instead of being grateful that David made an effort to ensure there were no accidents in his neighborhood, the audacious neighbors decided to take advantage.

You see, according to his ungrateful neighbors, the responsibility of getting the gravel road asphalted fell entirely on David’s shoulders. But how was that fair? They all made use of the road in their gated community, so why should David pay the cost?

But instead of telling them all off, David came up with a compromise. He was, after all, a reasonable man.

Trying to appease the ill-tempered residents, David offered up a 3 sq ft plot on the corner of his own land to make the turn around the property easier on drivers as they navigated the tricky gravel road.

But despite the gesture of goodwill, his neighbors threw it right back in his face. But that wasn’t even the worst part.

Since sacrificing the corner of his land, David watched in horror as drivers swerved even closer to his property. Then came the straw that broke the camel’s back.

One of the neighbors had ordered a truckload of wood. But, as the truck driver tried to cut the corner to drive onto David’s property, he took the corner too wide. The truck driver plowed over David’s fence. And nobody wanted to pay for the damage. David was incredulous!

“We had to replant these plants and place a new metal fence,” David’s daughter, Miha, wrote. “My father told me this was not the first time this happened, but actually the third. I couldn’t believe it when I heard this.”

After mending the metal fence for the third time, the police officer vowed to protect what was his — no matter the cost. Now, they had gone too far.

After he had inspected the damage, David was seething as he stomped back up to the house. Now, this was war. After he had been so generous to this entire undeserving neighborhood, he’d had enough of being taken advantage of.

That day, something inside him snapped as he inspected the broken cypress trees. But he’d get his revenge.

No one seemed to mind when the officer stationed a series of barrels around the plot of land he’d allowed them to drive on. It was his property, after all.

But while they looked like innocent plastic barrels on the surface, the neighbors would soon discover there was more to them than met the eye.

One morning, David was awoken by a loud banging at the door. His neighbor was furious that he’d driven into one of the heavy rock-filled barrels and damaged his car. But his intimidation tactics didn’t end there… he threatened the startled cop with a “pickaxe to the back.”

Knowing the law, David calmly informed him that the barrels were on his land. But his plan soon hit a snag…

Despite the huge deterrent, David found that so many drivers were hitting the barrels that they eventually split and became useless.

Going back to the drawing board, he contemplated various ways to deter the inconsiderate drivers for good. Then one night, he set about laying something that would earn him the respect he deserved.

The first neighbor on his way home that night was calmly driving along the road as usual. He knew that David let people cut across his property, so he swung his car around generously — not caring about the freshly laid flowerbed under the wheels.

The next thing he knew, the driver found himself in a heated conversation with his insurance company. You see, David’s petty revenge turned pro.

“My dad was furious,” Miha recounted on the Reddit thread r/ProRevenge.

“He cut some wood to use it as a mold. He bought cement, sand, and metal poles,” she continued. “One peaceful afternoon, my father and I cemented that whole part of the land and placed some lovely flowers on top.”

The disrespectful driver had happened upon the police officer’s new solution to the fence wrecking neighbors — a small concrete wall hidden under an attractive flowerbed right on the corner of his land.

It was working! The crafty cop’s neighbors couldn’t destroy any more of his property — although it took them a while to catch on before the matter was dropped completely.

A total of five neighbors wrecked their vehicles while cutting the corner — on the perfectly legal wall. Not having a leg to stand on, drivers eventually learned to steer clear of the property and stopped knocking on the police officer’s door to complain.

But one particularly angry neighbor escalated matters further, sending lawyers to snoop around the troubled street.

Some neighbors seriously damaged their vehicles, leading to insurance claims that required the cop to prove what he’d done was perfectly legal. Of course, he’d done his due diligence and could quickly show lawyers that he’d done the right thing. It was, after all, still his land.

When Reddit users read the satisfying revenge story, they clapped back.

“I’m very amused by the logic some people go by,” one incredulous user wrote.

“They ran over your trees? OHHH BOY,” another user wrote. “If they run over any more of your trees look up your local laws about trees. People have been sued for TONS of money over destruction of trees because they take so long to grow so they have a lot of value.”

Do you think that David went a little too far with his revenge?