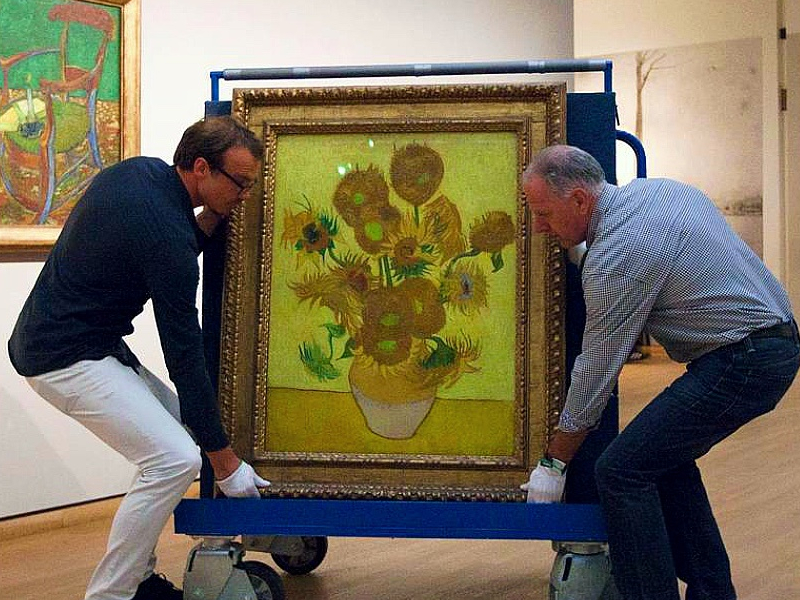 She stared into the microscope, wondering if her mind was playing tricks on her.

The strange pattern didn’t match the surrounding paint at all. There were no notes in the vast collection of previous research. Had she actually stumbled upon something new – a hidden secret Van Gogh had left behind? She had to find out the truth.

One would think that after years of being studied, that the Grand Master’s paintings wouldn’t have anything new to share.

But conservator Mary Shapie knew with every advancement in technology there would be new ways of figuratively peeling back the colorful layers of paint. So, when she was finally able to get her hands on a Van Gogh, it felt like Christmas day.

While most people adored Starry Night or Sunflowers, Mary had the privilege of inspecting one of her personal favorites in the series called “Olive Trees.”

The verdant greens, vibrant blues, and rich browns made her feel like she was walking under a hot Mediterranean sun. It was hard to believe that these paintings had nearly perished to fires, repainting, or decay. Their salvation was thanks to one insightful woman.

Van Gogh started working as an art dealer, but he hated the job. After that, he tried his hand at being a missionary. Although he did well, he didn’t stay on.

It was at the urging of his brother that the budding artist finally picked up a brush – and went to some very special places to find inspiration – one of which would hold the key to Mary’s discovery.

Wandering Through The Fields

The Van Gogh family had been fond of taking walks together through the countryside.

It was these memories that pulled him back to the familiar rolling hills and agricultural life that would eventually spawn some of his most famous work. There was, however, a crippling, dark shadow looming over the painter’s life.

It was no secret that Van Gogh suffered from depression.

After many years, the weight became too much, and the painter ended it all in the middle of a field – in the place his family had loved to spent time – the one place that he had truly been happy. But what happened to his work after he passed?

Passing On His Paintings

Well, they first went to his grieving brother, Theo.

The collection contained over 850 painting as well as over 1300 sketches and watercolors. However, tragedy struck again, and he passed away a few years later. The works then moved to his widow, Johanna. This ended up a crucial moment that would connect to Mary, and her discovery, many years later.

Credit To The Widow

Johanna saw the beauty in her late-brother’s work.

It was because of her that Van Gogh’s work made it into the public eye – at least for more than when the painter was alive. Fast forward to the 20th century, and the love of his work explode across the art world. At present, Mary squinted at the odd lump under the paint and held her breath. Without a doubt, she had found something new.

The raised bumps and distinct outline were definitely not part of the image. Thin lines protruded from the main section. When Mary’s brain finally put the pieces together, her heart started to pound like a jack hammer.

She grabbed her phone and called her boss – they were going to need a paleoentomologist.

Trapped under the paint, was a tiny grasshopper.

It might not seem like much to the outside world, but to Mary this was incredible. Van Gogh had painted outdoors, so it was no surprise that some poor little bugs would find themselves stuck to his canvas. But now, she hoped to use the insect to get a more accurate date on when the painting was actually made. This is why paleoentomologist, Michael Endle, was called in.

Mary loomed next to the Endle as he looked through at the miniscule grasshopper, vibrating with excitement.

She was probably acting like one of those annoying subway passengers who leaned in too close so they could also read your morning paper on the subway. But this was just too amazing. However, when Endle cringed and then sighed, her heart stopped.

“I’m sorry,” he said, point to the dried-out husk. “But it was dead long before it got caught in there. There’s not even anything inside anymore.”

Mary slumped in disappointment. Still, even if there wasn’t a big bang for the end of this discovery, it was still something to be celebrated, especially since Van Gogh himself wrote about it.

When Van Gogh gave his brother a collection of paintings, he also included a note that shared the painter’s battle with pests.

“I must have picked up a few hundred flies and more off the four canvases you’ll be getting.” Mary couldn’t help but chuckle at the idea of artist swatting at flies as he was trying to paint irises or wheat fields. Another, more important thought popped into her head.

Over the last few decades, scientific and technological breakthroughs had made it possible find things in art they had never dreamed.

One example was a hidden portrait under the famous “Patch of Grass”. Below the striking blues and greens was a darker, more foreboding face.

Who knows what would be unearth under years of paint and varnish?

This was one of the reasons Mary loved her job. She would continue to keep up to date on any advancement that could be useful to her. She felt like an explorer within a sea of oils and acrylics. It was truly her dream job.