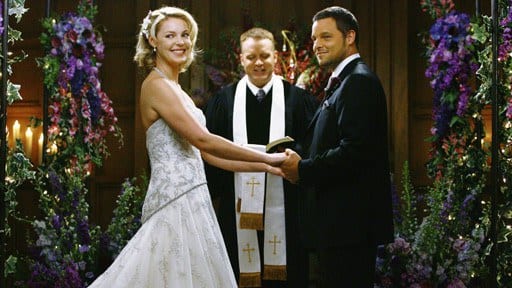 3 words, 8 letters: I. Love. You. Beautiful relationships are ones that should be celebrated, and, in the case of television romances, celebrated for all the world to see.

Weddings take couples on a journey from one stage of their relationship into the next chapter of their lives. This journey is one that we as viewers are a part of. After the awkward first date, the fights, breakups and makeups, moving in together for the first time, TV weddings are the ultimate step in this journey – and you get an invitation to watch with a prime seat .

On-screen relationships give us a sense of hope that perhaps one day we, too, will find our perfect ending. Plus, who isn’t a sucker for a good happy ending when our favorite characters when the characters finally say “I do”?

If you’re about to exchange vows with that special someone, let these prime-time nuptials give you some love-spiration. Whether you’ve seen them, or not, these epic TV weddings are sure to have to you reaching for the tissue box.

Below you’ll find five of our favorite TV wedding episodes to get you started.

5.) Leslie And Ben From ‘Parks and Recreation’

It was a rocky start for these two when Ben moved to Pawnee in season two, but after a friendly beer after work, the two realized they had a lot in common. Starting out as a secret romance, they were forced to choose between their careers and love – they opted for love. Although their careers were in flux, their love continued to grow, and in season five, Ben proposed, and the two moved in together. Later on, they had a spontaneous wedding ceremony at town hall. The phrase “I like you, and I love you,” truly shows how perfect this couple are for each other.

4.) Miranda And Steve From ‘Sex and The City’

This one’s another one-night-stand-turned-long-term-commitment. The relationship between Miranda and Steve was far removed from the will-they, won’t-they love Carrie and Mr. Big had, but it was so much more. When Steve lost a testicle to cancer, Miranda had sex with him to help him feel like a man. They went from dating to friends with benefits to friends to co-parents. Let’s just say it was a bit of a rollercoaster. As they raised their newborn baby together, Miranda began to develop feelings for Steve and ended up blurting out, “I love you” to him. To which he replied, “Miranda, you’re the one.” She was the one to propose to Steve, over beers. And the wedding itself was simple, no frills required. Instead of a church or reception hall, this couple decided on a community garden, the perfect venue to host their intimate wedding ceremony.

3.) Alex and Izzie From ‘Grey’s Anatomy’

For the 100th episode of Grey’s Anatomy, creator Shonda Rhimes gave fans a monumental surprise. While battling cancer, Izzie was given something to distract her: planning the wedding of Meredith and Derek. As the date drew nearer, Derek discovered something upsetting, an inoperable tumor. Instead of Meredith walking down the aisle, she gave Izzie the only chance she had to do the same. Dressed to the nines in a gorgeous white wedding dress, she was able to live the wedding of her dreams – she did plan it after all – to the dreamy Alex Karev. Akin to a fairytale, the entire church was covered in flowers and candles, making the ceremony all the more magical. Meredith still got her place on the altar, though it was as best woman for Karev. Although she was barely able to stand, Izzie made it down the aisle with the help of George. Alex’s vows will melt your heart, and their first kiss as husband and wife will make you swoon.

2.) Haley And Nathan From ‘One Tree Hill’

The relationship between “Naley” was a rocky one, but one for the ages. Haley met Nathan when she started tutoring him in season one. Although they were from hugely different backgrounds and had different dreams, the two fell hard for each other. These high school sweethearts were ready to go the extra mile very quickly and were married at 16 years of age. As with any young romance, there were many trials and tribulations that came along with marriage. They had never had sex, lived together or had another relationship to learn from – it was a series of firsts. The first year of marriage was hard for both parties, and they grew apart, Haley going on tour and Nathan returning to his old ways. In season three, the two rekindled their romance, and Nathan proposed to her again. The result was a beautiful wedding between these young, devoted lovers.

1.) Chandler And Monica From ‘Friends’

First came friendship, then came a one-night-stand in London during Ross and Emily’s wedding. This, of course, didn’t stay true. After returning to New York, Chandler and Monica continued a secret relationship that took them from friends with benefits to full-blown love. As their relationship grew, Chandler overcame his fear of commitment because they were just perfect for each other. The proposal was IMO one of the most heartfelt proposals on television. Richard, Monica’s boyfriend from the earlier seasons professed his undying love for her, while Chandler was trying to make her believe he wasn’t one for marriage. It culminated in Monica dropping to one knee and asking Chandler, “Will you marry me?” Although the 24 hours leading to the wedding were a bit rocky – Chandler almost ran off, Joey couldn’t make it to officiate the ceremony – the vows were worthy of the prime-time slot in which they were aired. Monica got her happy ending, and Chandler learned that commitment isn’t as scary as he thought.

Are there any TV weddings we may have missed? We’d love to hear which ones are your favorite in the comments below!

Hearing wedding bells in your near future? A unique proposal like the ones here deserves a stellar ring presentation. Get some creative inspo from our list of unique ring holders for your one-of-a-kind woman.