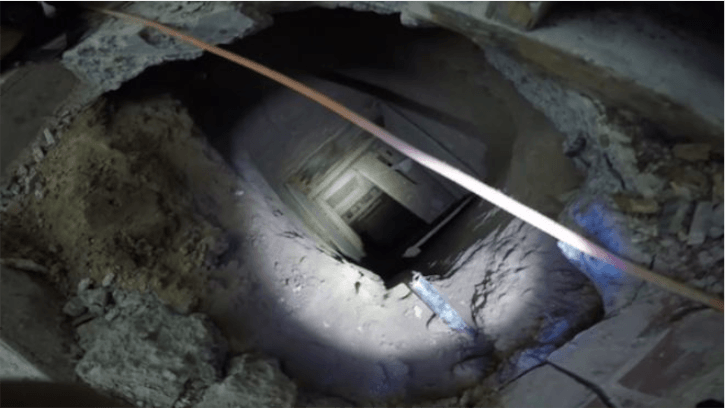 As he crept ahead through the abandoned restaurant, the only sound echoing through the empty building was the muted clunk of his steel-toed boots on the tiles.

He quietly walked past the filthy deep-fat fryer and moved toward the back of the kitchen. With his muscles coiled, he rounded the corner and stopped dead in his tracks. When he saw the 8-inch hole, he called for backup.

Officer John Erwin had seen a lot during his time working for U.S. Immigration and Customs Enforcement, but he had never seen anything like this. It all began when H.S.I special agent Scott Brown had put him in charge of a raid on a KFC building in Arizona.

It is a well-known fact that fried chicken chain KFC is second only to McDonald’s when it comes to fast-food sales. With 20,000 stores all around the world — almost 4,500 in the U.S. alone — the Colonel’s chicken empire continues to grow.

But one franchise in San Luis, Arizona, caught the eye of Homeland Security. And what officers found inside made their heads spin.

Locals of San Luiz remember a time when they could grab a bucket of fried chicken just 200 yards away from the Mexican border. But one day, the KFC mysteriously shut its doors to the public, and the once-popular restaurant’s shell deteriorated.

The sign faded in the baking heat, and the paint began to bubble off the walls. It stood empty for years, but, strangely enough, there were always a few cars parked outside. And nobody knew why.

Months After the KFC shut its doors, lights began to go on inside the building, late at night. The locals began to speculate that the building might see a reopening yet.

They heard the blasting and drilling and assumed that the restaurant was undergoing a revamp. But, to everyone’s surprise, the building remained closed. Then, the rumors began.

But none could have ever guessed what was really taking place within those crumbling walls. Indeed, it took months for officials to piece the clues together.

Late one evening, H.S.I special agent Scott Brown’s personal cell phone rang. Annoyed by the late hour, Brown considered sending the call straight to voicemail. But then, a strange feeling came over him.

He answered gruffly, but he never dreamed that the man on the other end of the line would give him a tipoff like this. He had to get a warrant… and fast.

Immigration and Customs Enforcement applied for a warrant to search the defunct KFC building. When it was granted, Officer John Erwin was dispatched to head the team of I.C.E. agents.

But when he entered the dusty kitchen, he discovered an 8-inch hole in the wall. He called backup. They began to chip away at the plaster surrounding the hole, revealing a deep shaft. What had they found?

Officer John Erwin shone a flashlight into the pitch-black shaft and was astounded to see hundreds of wooden planks lining the walls.

The team carefully climbed inside, down into a dark passageway. The tunnel was three feet wide and five feet tall — large enough for a man to fit easily inside. Officer Erwin took a deep breath, and then he disappeared into the tunnel.

The officers followed, walking along the tunnel quietly and praying that armed guards weren’t waiting for them on the other side. But just how deep did the passageway go? And what would they find?

Suddenly, the silence was broken by the sound of footsteps running in the opposite direction. They weren’t alone. That’s when an unbelievable reality began to dawn on them.

Where Did It Lead?

It occurred to Officer Erwin in an instant — the tunnel was positioned to go under the Mexican border, straight into Mexico! At the end of the 600-yard-long passage, they came to a ladder that led to a trap door in the ceiling.

Officer John Erwin signaled for silence as they braced themselves for a moment. Then, he kicked through the trapdoor.

After swiftly breaking through the trapdoor, Officer Erwin cautiously peered out. Above him, he saw rusty bed springs. They would have to climb out to investigate. But when they did, they couldn’t believe their eyes. They had ended up underneath a bed in a Mexican home!

Then, Officer Erwin noticed the long rope next to the trapdoor’s entrance. But he didn’t have time to inspect it — someone was coming.

The officers heard footsteps echoing through the tunnel and saw the faint beam of a flashlight. They stood back and waited, and the man practically walked into them.

His eyes widened when he reached the top of the ladder and found himself surrounded by I.C.E. agents. He had a suitcase in his hand, which was promptly confiscated. What had been going on here?

The first piece of the puzzle had arrived by pure chance, just weeks prior to the discovery of the tunnel. Border police had pulled a man over for a routine traffic stop. After the usual questions, the man’s license and plates seemed to check out.

The officers were about to let the man go on his way when suddenly their service dog took one sniff at his trailer and went ballistic.

The officers searched the trailer and found two toolboxes. But when they cracked them open, they were floored. On closer inspection, both boxes contained illegal substances. The man, named Ivan Lopez, was immediately arrested.

But, delving deeper into the man’s history exposed a brazen operation that no one had seen coming. Lopez’s freedom had come to an end, but his legacy had just begun.

After Lopez’s arrest, H.S.I special agent Scott Brown received an unsettling phone call. The call was from an anonymous resident who gave him a reason to suspect that they were only just scratching the surface of Lopez’s crimes.

After some digging, Brown discovered that it was Lopez who had purchased the old KFC — for which he had paid $390,000 in cash. He immediately contacted Immigration and Customs Enforcement. But was he fast enough?

After putting two and two together, It was clear to officials that the reason for this brazen under-border tunnel was to enable Lopez and his cohorts to smuggle contraband into the U.S from Mexico.

Indeed, Lopez’s confiscated toolboxes held narcotics worth around $1 million. But how had they gotten away with it?

Officials believe that, due to the tunnel’s size, the people involved in the trafficking would climb down through the trapdoor in the Mexican home and walk the 600-yard passageway until they were directly underneath the old KFC building.

They would then deposit the illicit substances and they would be lifted out with a rope through the 8-inch hole in the restaurant’s wall. But this tunnel isn’t the first one of its kind in Arizona…

“Tunnels are a time-consuming venture, but [they have] definitely increased since border security measures have ramped up,” H.S.I special agent Scott Brown said in a statement.

“One of the things that tunneling does tell us is that as we increase infrastructure, resources, patrol, that’s forcing them to go to more costly routes into the US,” he added.

Authorities believe that Lopez is a prominent member of the Mexican cartel. He is currently in prison without bail while he awaits criminal charges.

And while these cartel tunnels are becoming more common around the Mexican border, agent Scott Brown reveals that there was something particularly frightening about the KFC tunnel in Arizona.

This One Was Different

According to Brown, all the substances authorities found were all “hard narcotics”. He said: “I think that’s what makes this tunnel a little unique and, frankly, a little more scary than some of the other ones we’ve seen.”

Meanwhile, Richard Jessup, the town’s Chief of Police told the Washington Post that the surge in tunnels is not surprising.

Going Under The Border

“Generally along the southwest border, every couple of months, we’re encountering a tunnel,” Jessup explained. “Of course, if you can’t go over the wall, you go under [it].”

And while most of these tunnels are left unfinished, some aren’t. And the KFC tunnel wasn’t the longest cartel tunnel by any means. In 2016, agents discovered a tunnel in San Diego, California that was nearly half a mile long, ending in Tijuana, Mexico.

And it’s even not the first to start in San Luis, either. Indeed, a case from 2012 found a passageway that linked Arizona city with San Luis Rio Colorado in Mexico.

Nevertheless, the tunnel shooting out from the abandoned fast-food restaurant is still a noteworthy addition to the long list of instances along the border, mostly because of the huge weight of hard narcotics seemingly transported through it.