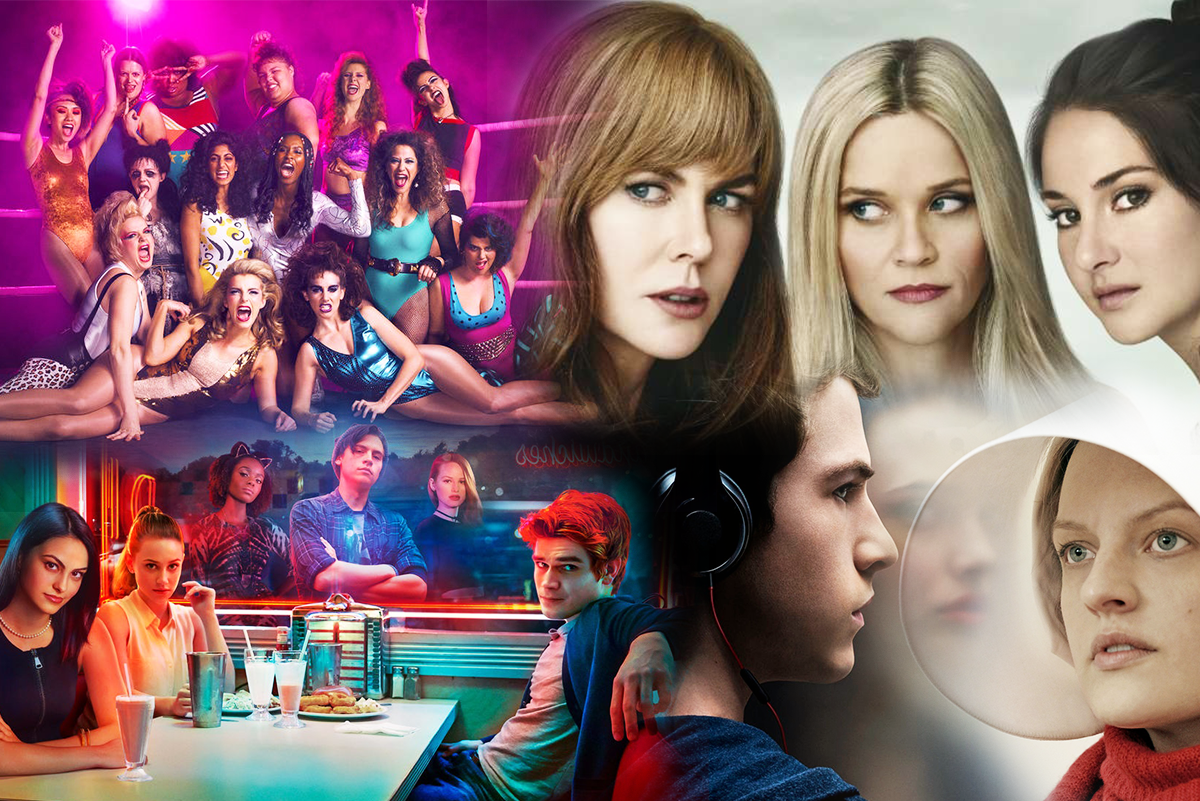 The word on the street is that in 2017 it’s no longer shameful to admit that you’ve spent a good part of the year in front of your TV. Nobody will blame you, because everyone’s most likely been busy doing the very same. If anything, 2017 gifted us with a never-ending supply of quality entertainment, attracting some big (and sometimes even huge) names to the small screen and constantly coming up with new tricks to get us on this binge-watching ride.

The holiday season is always a great excuse to finally watch all the great shows you’ve missed during the year or to indulge your desire and rewatch your faves. If you’re planning on doing the former this December, we’ve picked out the Top 5 TV smashes that should be on your queue (if they’re not already), from dark teenage sagas to shameless ’80s exploitation. Now where’s the remote?

The grown-ups may have gotten their share of wicked fun with the return of Twin Peaks, while the teens were introduced to the world of TV noir in the genre-bending adaptation of classic Archie Comics called Riverdale, which took a turn to the darker side.

In the seemingly friendly town of Riverdale nothing is what it seems and danger’s always lurking just around the corner. But some things remain the same: all of its trouble-making youth is drop dead (pun intended) gorgeous, while all of its secrets are way too juicy to look away. The show’s second season has already premiered, the comic book version and eerie soundtrack are out and the spin-off series based on Chilling Adventures of Sabrina comic books will hit Netflix sometime soon. In the meantime, why not revisit good ol’ classics Sabrina the Teenage Witch or Buffy the Vampire Slayer, which married death with sass in a similar fashion?

Get your glittery spandex fix with another not-so-hidden Netflix gem called GLOW — a colorful series about the wild, wild world of female wrestling. GLOW actually stands for Gorgeous Ladies of Wrestling and was inspired by the ’80s TV show of the same name.

All of you GLOW addicts will be happy to know that there’s also a documentary about the original show and that the neon-lit comedy will return next year, so you can already start planning a killer GLOW-themed party, featuring all of your favorite ’80s songs and some unapologetically riotous outfits. And don’t go easy on the hairspray!

As if Stranger Things wasn’t a good indication of Netflix’s knack for creating binge-worthy TV gold, the adaptation of 2007’s hit YA novel proved that the company knows oh too well what it takes to cook an instant hit.

The reactions were polarizing on whether the show’s message was good or not and the final episode’s (although foreshadowed in the show’s very DNA) pivotal moment hit us a bit too hard. Whether or not you agreed with the message, it helped more self-help books aimed at teenagers (like this one) to see the light of day, and who couldn’t agree with that?

A well-thought-out soundtrack, which included the show’s executive producer Selena Gomez’ airy rendition of Yazoo’s classic “Only You,” was an additional bonus and yes, it’s available on vinyl. Although a true 13 Reasons Why fan would want to get their hands on an audio cassette version or a set of blank audio cassettes and make themed playlists themselves.

And since the show is definitely coming back for a second season, a 2018 wall calendar  would be a good addition to your home décor whole you count the days until the return of this troubled squad.

The story of well-developed female characters battling their inner demons (and a few demonic men in their lives) resonated with a lot of viewers, thanks to the show’s captivating atmosphere, clever soundtrack,  undeniable wit and strong performances from all parties involved.

If you’re looking for more female-centered entertainment, then maybe it’s time to revisit the residents of Desperate Housewives’ Wisteria Lane. These females have enough secrets to carry you through until the release of the recently announced Big Little Lies second season.

There were a lot of stellar adaptions this year, weren’t there? April saw the release of The Handmaid’s Tale, Hulu’s take on 1985’s novel of the same name by Canadian author Margaret Atwood. In the year of the Women’s March and #MeToo movement, this dystopian story felt shockingly timely.

The show takes place in the near future, where the small number of remaining women who are still fertile are treated like slaves and ordered to go through all sorts of misogynistic acts. Elizabeth Moss carries the show with her usual grace and power, and the first season was a hit among viewers and critics all over the world, leaving everybody wanting more. And we won’t have to wait for some dystopian future for it to happen — the second season premieres as early as next year.

A bit of trivia: there’s also a ’90s movie version starring Faye Dunaway and Natasha Richardson, which opts for a campier take of the source material.

What were your favorite TV shows of 2017? Let us know in the comments below!