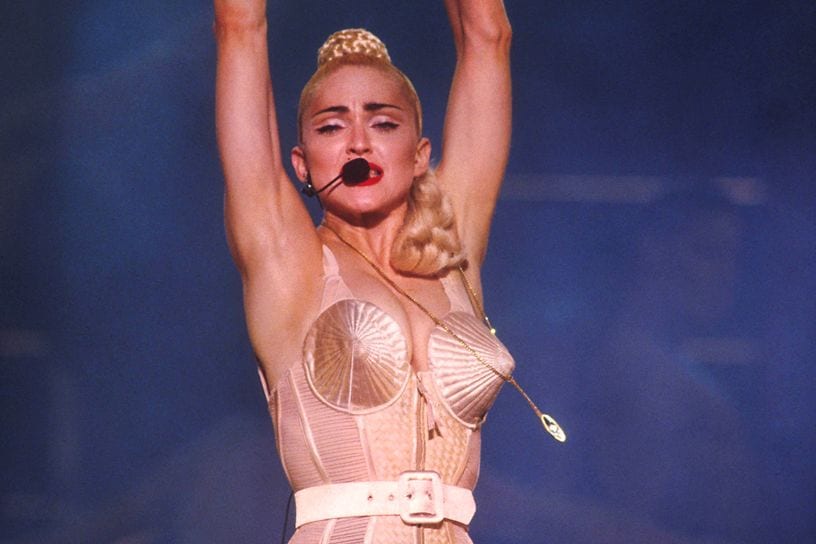 Madonna is an American singer, songwriter, actress and businesswoman. She achieved major popularity in mainstream music, especially with her legendary music videos. Madonna is one of the most influential and controversial artists of all time.

While Madonna may seem like some sort of superhuman—pointy breasts and all—she actually struggled to make her way to stardom. She wasn’t born into money or fame; she had to earn it. These top ten facts will be Madonna news to you and are sure to help feed your Madonna obsession and give you a little insight into her rise to the top.

It might surprise you to discover that one of the most famous people in the world has a crippling fear of confined spaces. Madonna has claimed that she often suffers from panic attacks and feels claustrophobic when performing on stage. The musician said that although there are times she feels “invincible” in front of audiences, there are other occasions where she has felt like she “might just die.”

She told Dazed and Confused that, “when you have panic attacks you cannot rationalize them. Obviously there’s enough oxygen for me but it never happens outdoors, its normally in indoor sports arenas that feel very close when suddenly I feel claustrophobic. It’s not a fear of performing.”

While older fans know this, younger fans might not. Madonna was just 5 when she lost her mother, also named Madonna, to breast cancer. The singer has discussed the pain of losing a parent so young in a number of interviews and covered this subject on albums.

She visited her mother’s grave in her 1991 documentary “Truth or Dare.” She shared this: “My mother’s death was a big mystery to me when I was a child. What I remember most about her was that she was very kind and very gentle and very feminine. It seemed so unfair.” Most recently, Madonna featured a framed picture of her mother in the music video for her single “Ghosttown.”

She dated Tupac and Prince. Madonna briefly dated Prince in the 1980’s. She later told Rolling Stone the “Purple Rain” singer was “a little troll” who sipped tea and didn’t eat any food on their dinner date.

A lesser known romance was recently revealed when Madonna told shock jock Howard Stern that she was “dating Tupac Shakur” and feeling “very gangster” at the time of her controversial 1994 appearance on David Letterman’s late night show. Rosie Perez revealed that she actually set Madonna up with the rapper.

Madonna Louise Veronica Ciccone was born in Bay City, Michigan, on August 16, 1958, to parents Tony Ciccone and Madonna Fortin. Tony, the son of Italian immigrants, was the first of his family to go to college, where he earned a degree in engineering. Madonna’s mother, an x-ray technician and former dancer, was of French Canadian descent.

After their marriage in 1955, the couple moved to Pontiac, Michigan, to be close to Tony’s job as a defense engineer. Madonna was born three years later, during a visit with family in Bay City. The third of six children, Madonna learned early on how to handle her role as the middle child. She admitted that she was “the sissy of the family” who often used her feminine wiles to get her way.

Madonna’s provocative career has always overshadowed other parts of her life, including her charitable efforts. In the 1980’s and 1990’s, Madonna was one of the few big stars to publicly support the gay community and fight for AIDS and safe-sex awareness.

Millennium Promise is a non-profit organization which works towards the halving extreme poverty in Africa by 2015. This organization works with impoverished communities, national and local governments, and partner organizations to implement high-impact programs aimed at transforming lives on the continent and engaging donor nations, corporations, and the general public in the effort. International Medical Corps is a global, humanitarian, nonprofit organization dedicated to saving lives and relieving suffering through health care training and relief and development programs.

In 2010, Madonna’s then 13-year-old daughter Lourdes realized she had quite the eye for fashion. It must be in her genes. So the pop star and her teenage fashionista launched “Material Girl,” an affordable clothing line for juniors that is featured in Macy’s.

Don’t worry, parents—the clothes are based on Lourdes’ hip but conservative tastes, not the risqué outfits you remember Madonna showing off in the ’80s. However, the line was inspired by Madonna and Lourdes’s dance roots. The Material Girl collection included jeans, shoes, fingerless gloves, necklaces and other accessories.

Madonna says she never realized that her hit song would turn into a clothing line that her daughter would design.

Madonna never wanted to be under the control of some demanding record label. So in 1992, she decided that she wanted to be her own boss and became one of the founding members of Maverick Records, part of the Warner Music Group. She still had rules to follow, but at least she had a say and was able to put her own demands into her contracts.

The contract was initially thought to be worth as much as $60 million, making it one of the most lucrative deals negotiated by a pop artist. Even topping the $50 million agreement between Michael Jackson and Sony Corp.

In 2004, Madonna sold her stake in the music label after she accused the firm of cheating her out of millions of dollars. She initially sued Warner Music for $200m (£112.5m), claiming that mismanagement and improper accounting cost her and her partners millions of dollars.

3.) Started Out as a Drummer

While performing as a backup singer and dancer for the French disco artist Patrick Hernandez on his world tour, Madonna became romantically involved with musician Dan Gilroy. Shortly after, Madonna announced that she had started dating Dan Gilroy of the band the Breakfast Club.

The following year, she joined Gilroy’s band—but not as a singer. She started out on the drums, creating the pop ’80s beats that the era is known for. She also learnt how to play the guitar and keyboard. But shortly thereafter, her beauty and ability to carry a tune prevailed, and she became the band’s lead singer.

1n 1980, she left the Breakfast Club with her then-boyfriend, Stephen Bray, and formed the band Emmy. They both began to write songs and make music but Madonna later decided to market herself as a solo act.

Back in the 1970s, before Madonna was a household name, she did whatever she had to do to pay the bills. She posed nude as an art model, worked as a server and did random performances for the American Dance Center in New York City—all to scrape together enough to keep a roof over her head in the Big Apple.

Madonna had dropped out of college and moved to New York to find fame. She says that she only had $35 in her pocket and it was her first time even taking a plane. She initially worked as a waitress at Dunkin’ Donuts while taking classes at the Alvin Ailey American Dance Theater. Madonna eventually began performing with Pear Lang Dance Theater. That’s when she landed a job as a backup singer and dancer for the French disco artist, Patrick Hernandez, and the rest is history!

Believe it or not, the future queen of pop was at the top of her class back in the day. Throughout high school, she maintained straight As, while cheerleading and dancing in the afternoons. Her dedication to extracurricular activities and ability to focus on her studies caught the attention of the folks at the University of Michigan.

They offered her a full scholarship to attend college and become a member of their dance crew. She stayed at the university for only two years, though. With a little push from her dance instructor, she built up the courage to drop everything, move to New York City and follow her dream of dancing.