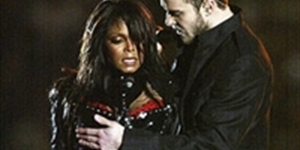 The Super Bowl halftime show has become just as important and as well-watched as the game itself. Chicks got to have something to keep them into the game, right? Football game halftime shows used to be nothing more than marching bands and cheerleaders doing their things in formation while we went to get something to eat from the concession stands. Now it’s become a full-blown must-see, made-for-TV spectacle.

Gone are the marching bands and cheerleaders. In are fireworks, hundreds and sometimes thousands of performers, and some of the biggest names in entertainment with a stage performance on the football field that has no rival. It’s like Broadway meets Woodstock at halftime. All done in just under a half hour. As Top 5 take a look at the history of the Super Bowl halftime show and the Top 5 Super Bowl Halftime Shows and its performers, Top 5 wants to know just why on Earth has the Grambling State University Marching Band been involved in so many these shows? 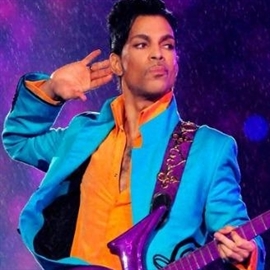 Prince One year later, Jimi Hendrix’s “Mini Me”put on a lively seven-song set that included covers of “All Along the Watchtower,” “We Will Rock You,” Proud Mary.” Football fans were even seen swaying their hands in the air like they just didn’t care to his classic “Purple Rain.” Top 5 doesn’t even want to know what the crowd would have done had Prince performed his other classics “Soft and Wet” or “Head.” 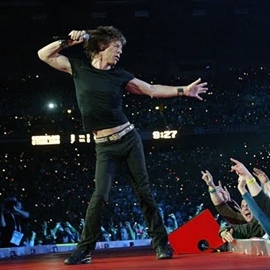 The Rolling Stones It’s the Rolling Stones. What more do we need to say? They’re all as old as time and still performed like they were playing at Altamont in 1969. Fortunately for the Stones, unlike Altamont there weren’t any Hell’s Angels, riots or deaths at Super Bowl XL. 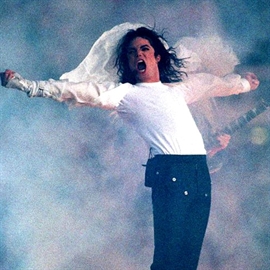 Michael Jackson Take away all of his cosmetic surgery, alleged child molestation charges and overall craziness and Jackson was one of the best performers in the universe. He was still at his peak and spitting out hits like nobody’s business. His over-the-top show pretty much set the standard for future Super Bowl Halftime Shows. And unlike his younger sister there was no wardrobe malfunction, but there was a lot of the grabbing of the crotch – his trademark move. Top 5 is a little disturbed that Jackson had some 3,500 kids participate in the performance though. 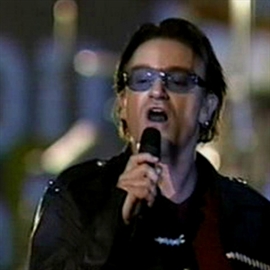 U2The country was still reeling from the September 11 attacks on the World Trade Center and everyone was still looking for a little escapism and comfort. Bono provided that and more with a rousing performance that featured all the victims’ names scrolled up on a huge screen behind him as he performed a stunning version of “Where the Streets Have No Name.” However, Top 5 wonders why Bono opened with “Beautiful Day”? “Discotheque” would have been a much better choice. 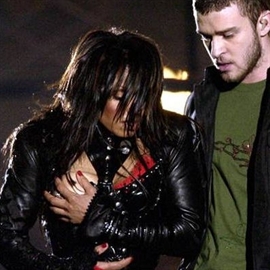 Janet Jackson, Justin Timberlake, Jessica Simpson, P. Diddy, Nelly, Kid Rock This one is a no-brainer. In what was thought to be just your garden variety over-the-top halftime show turned into a media and cultural firestorm. It was called by many the biggest wardrobe malfunction in history, and provided boys wet dreams to last a few months. Just as they were about to finish their duet and end the show, Timberlake tears off part of Jackson’s outfit and reveals her right breast. People went absolutely nuts with everyone from the Federal Communications Commission (FCC) to Top 5’s neighbors across the street getting involved talking about either how lewd or cool it was to see one of Jackson’s goodies.

McCartney started a wave of Dinosaurs of Rock such as himself, Bruce Springsteen, Tom Petty & the Heartbreakers and The Who playing the halftime show. The majority of fans who listen to McCartney perform “Drive My Car,” “Get Back,” “Live and Let Die,” and “Hey Jude” weren’t even born when they were actual hits.

How do you not like a halftime show that includes performances by the legendary Fitzgerald and Channing doing a tribute to an even bigger legend in Louis Armstrong?

This is the way it used to be before the game was hijacked by the overblown halftime shows we’ve all come to know and expect. Marching bands and drill teams that the entire family could enjoy in the first ever Super Bowl. Top 5 didn’t have a clue who Al Hirt was until we looked him up. He was an American trumpeter and bandleader who somehow sold millions of albums. Bonus points to anyone reading this who has one of his albums.