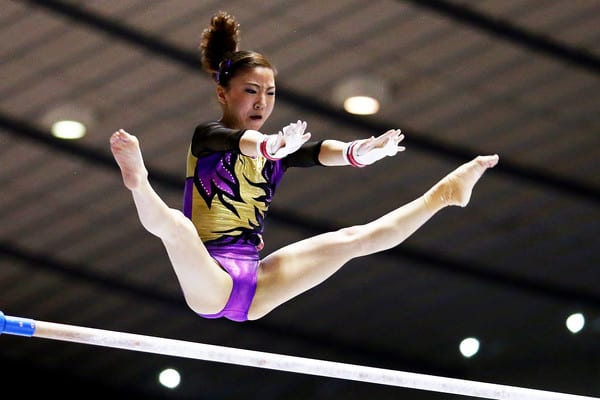 If you close your eyes and visualize “notable Olympic athletes,” who comes to mind? Michael Phelps? Usain Bolt? Kobe Bryant? Maybe you went old school and conjured up Muhammad Ali, Bruce Jenner or Gabrielle Reese. At an average height of 6 feet 4 inches tall, these giants of the Olympic universe share little more than the Olympic moniker with the podium-hopefuls on our list. It just goes to show that you don’t have to wear a size 13 shoe to leave an impression of Olympic proportions on the world.

When we say, “short basketball players,” do we say, “oxymoron”? Professional basketball is known to be a game for tall people. The average height of NBA players is roughly 6’7″. The NBA has claimed that male professional basketball players tend to be 9 inches taller than the average male. Late Olympian and 5-foot-10-inch tall Lester Lane would probably disagree, that is, if his own shot clock hadn’t already expired. The 1960 Rome Summer Olympics were the first to be fully covered on television, so viewers watched Lane and the American men’s basketball team win gold that year despite having one of the shortest Olympians as a key player.

After the Olympics, Les Lane coached Mexico’s national team which finished fifth at the 1968 Olympics. Afterward, Lane went on to coach a Spanish club, Aguilas Bilbao from 1968 to 1970 but quit coaching after he suffered a heart attack. In Spring 1973, Lane was named head basketball coach at the University of Oklahoma. However, he never held a practice as he passed away after a heart attack.

Tara Lipinski began roller skating at age 3 and by age 6 she began ice skating lessons. By age 9, Tara began to win gold medals in national championships for her age group. It was as if Tara had planned to win an Olympic gold medal her whole life.

In Nagano, Japan, at the 1998 Winter Olympics, Tara Lipinski, one of the competition’s youngest and shortest figure skaters took the ice and took the gold from then-favorite Michelle Kwan, who is two years her senior and four inches taller. A skateless Lipinski stands 4 feet 10 inches tall, but there’s nothing short about her skating ability. Capable of exploding from a dead stop and completely dominating the ice, little Lipinski made a big name for herself in ’98. She became the youngest female in her sport to win an Olympic gold medal at the age of 15. As well as the title as one of the shortest Olympians.

15 years after Lipinski’s Olympic success, she took on a new role as a TV sports commentator for NBC, NBC Sports and Universal Sports, as well as guest roles in top TV shows. She also regularly appears as TV analyst for the World Figure Skating Championships, the Grand Prix of Figure Skating Series and the US Figure Skating National Championships. In July 2016, Lipinski became an executive producer for a Hulu drama series about figure skating.

The bronze medal for shortest Olympians goes to America’s sweetheart, retired American gymnast Mary Lou Retton. Retton’s 4-foot 8-inch frame graced the podium five times in 1984, earning gold, silver and bronze medals. Retton was the first American woman to win the all-around gold medal at the Olympics. This record was not beaten for twenty years. She won the silver in the team competition and the horse vault and won bronze in the floor exercise and uneven bars. The pixie Bela Karolyi prodigy captivated the world in 1984 when she earned a perfect score of 10 on the vault in the women’s all-around. Shortly after, Retton was also named Sports Illustrated magazine’s “Sportswoman of the Year” and was featured on a Wheaties box, becoming the cereal’s first official spokeswoman.

Mary Lou Retton was back in the spotlight in 2017 when the USA Gymnastic sex abuse scandal hit the news. Retton visited senator, Dianne Feinstein, in an attempt to persuade her to drop the sex abuse bill that aims to protect children and young athletes from being sexually abused. As expected, many people responded to Retton’s actions with much anger.

Somewhere in the Pacific Ocean, midway between Hawaii and Australia, sets the tiny Polynesian island nation of Tuvalu. It’s just 10 square miles, shore-to-shore. Hailing from that tiny island is a relatively tiny Olympic weightlifter named Tuau Lapua Lapua. On the Olympic scale, weightlifters average 5 feet 5 inches tall, yet Tuau stretches the tape at only 4 feet 7 inches tall. At the 2010 Commonwealth Games in Delhi, India, Lapua Lapua won 15th place in the men’s final for weightlifting. In the 2012 Summer Olympics, he won 12th place in the men’s 62kg. Although only an inch taller than Teramoto at the top of the shortest Olympians list, Lapua Lapua is able to lift around four times his own weight. However, he was skunked at the podium, he was the silver medalist as the second shortest athlete in the London games.

At just 4 feet 6 inches tall, 17-year-old Japanese gymnast Asuka Teramoto—the shortest athlete in the 2012 Olympic games—competed on the world’s stage in the women’s individual all-around. Yet she’s hardly tall enough to ride Space Mountain at Tokyo Disneyland. She didn’t reach the podium that year, but if medals were given for being tiny, she would have won gold as the shortest competitor in the games. In Rio 2016, Teramoto won the eighth place in the all-around and fourth in the team final which was the best the Japanese women’s team have done since 1964.

These five athletes prove that height is not an obstacle in the world of sports and with determination and skill you can be successful.