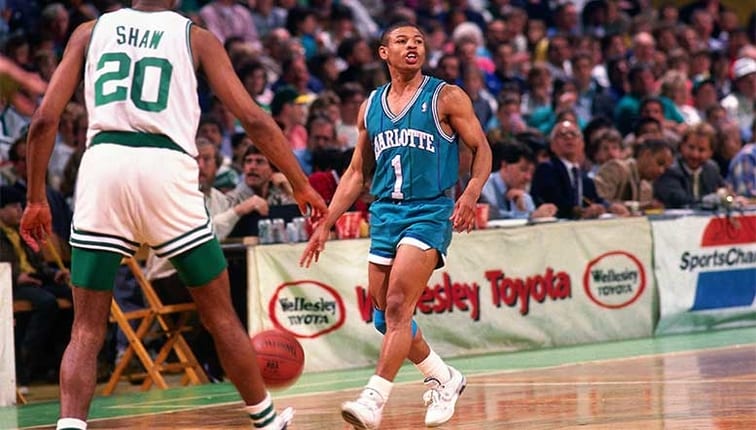 The National Basketball Association is a league often dominated by giants, with 7-footers commonplace. But there, among these titans, a smaller breed has quietly thrived. These are the players who are not 7 feet tall. They’re not even 6 foot 6. In fact, they are not even an average of 5 foot 9. They are the NBA’s mightiest of mites, the shortest players in league history. As several of them showed, heart — and a little leaping ability — sometimes means as much as height when it comes to NBA success.

Charlie Criss is the only official player to wear the NBA uniform at the height of 5 foot 8. It is no hidden fact that he was one of the shortest NBA players in the history of the game.

In the late 1970s and early 1980s, he played for different teams like the San Diego Clippers, Atlanta Hawks and Milwaukee Bucks. Charlie Criss wasn’t drafted until he was 29 years old, and he played for about 9 years before he retired at the age of 36 with an average of 8.5 points and 3.2 assists per game.

Back in 1970, Calvin Murphy was drafted No. 18 overall. He is one of the unique players in NBA history to have played for a single team. Calvin Murphy was not a good distributor, but he was a fantastic scorer.

Murphy was 5 foot 9 making him one of the shortest basketballers in the game.

During the 54th overall pick in 2017, Kay Felder was taken in the second round because of how his height and style give a new meaning to the NBA.

So far, Kay Felder’s height and name haven’t translated well. He only played 57 games in his career and averages 3.9 points in 9.2 minutes per game.

Chris Garner didn’t spend a lot of time as a player in the NBA, and he was not drafted because of his height.

Chris Garner career ended at the age of 25 after playing for Toronto Raptors in 1997-98 as a backup.

Despite his stature, Avery Johnson found his way to a great career in the NBA.

Avery Johnson started with Seattle Supersonics before moving to other teams like San Antonio Spurs, Denver Nuggets, Houston Rockets, Dallas Mavericks, and Golden State Warriors. His best season was 1995-1996 when he averaged 13.1 points and 9.6 assists for the Spurs.

Damon is the highest drafted player with a height below six feet. He was ranked No. 7 back in 1996 by the Toronto Raptors. His fearsome style of play earned him the nickname “Mighty Mouse”.

In his early days in the NBA, he was an excellent scorer and distributor (averaged 19.3 points and 8.8 assists), but he ended his 13-year career with an average of 13.4 points and 6.1 assists per game.

Terrell broke into the NBA league as a reserve player for the Cleveland Cavaliers before he took over the starting lineup at the age of 25. Terrell was involved in a transfer between three big teams before he retired at the age of 31. He averages 13.8 points and 6.1 assists per game.

At 5 foot 11, he is also on the category of the shortest basketball players in the NBA.

John Lucas became a popular name in the NBA history when he had a good season in 2005-2006 as a point guard for Houston Rockets.

John Lucas also played in China, Italy, and Spain before returning to the NBA to play for the Chicago Bulls.

After his best season, he played for other teams like the Houston Rockets, Indiana Pacers and Sacramento Kings.

Shane Larkin is an NBA player with an average of 5.8 points and 3.2 assists per game. He is slightly below six feet tall, but he was drafted No. 18 in 2013 by the Atlanta Hawks.

He played for a couple of teams in the NBA, and he has imprinted his name in the heart of the fans.

Keith “Mister” Jennings was another 5 foot 7 NBA point guard who carved out a short but respectable career in the league. Jennings lasted only three years in the league, spending 1992 through 1995 with the Golden State Warriors. He went out “on top,” with his last season as his best.

Among the handful of NBA players who stood 5 foot 7, Greg Grant is probably the smallest, listed at mere 140-pounds of playing weight. He also faced some of the longest odds of success, rising from NCAA Division III Trenton State to the pros.

Grant may have “towered” over Bogues and the others, but he was not in their league as a player. He lasted only six seasons from 1989 to 1996 and bounced from team to team on his way to six different franchises in the process. He finished his career averaging less than three points per game, but he played 274 more NBA games than many taller men.

Despite standing only 5 foot 6, Anthony “Spud” Webb earned lasting fame by jamming his way to victory in the NBA’s Slam Dunk Contest in 1986.

His sudden impact helped make him the first of these sub-6-footers to thrive in the league. When he debuted, he was the shortest player in NBA history, and he paved the way for other less-than-tall stars like Bogues. Webb spent six years as the starting point guard for the Atlanta Hawks and Sacramento Kings, part of a 12-season NBA run from 1985 to 1998 that saw him average just a shade under 10 points per game.

At 5’5″, Earl Boykins is the second-shortest player in NBA history, and the lightest, at a playing weight of 135 pounds. Although he did not experience Muggsy Bogues’ success, he managed to carve out a long playing career among the trees, lasting parts of 13 seasons in the league.

He bounced around, playing for ten teams from 1998 to 2012 while only starting 34 games, but he always bounced back and found a new home. Boykins didn’t have a fancy nickname like Bogues, Spud Webb or Keith “Mister” Jennings, but he did average 8.9 points per game during his career.

Muggsy checked in at an underwhelming 5 foot 3, but he played parts of 14 seasons in the NBA from 1987 to 2001, most of them as a starting point guard for the expansion Charlotte Hornets in the early 1990s. Muggsy gained fame for his photos alongside 7 foot 7 teammate Manute Bol during his rookie year, but he was far more than a sideshow. His 7.6 assists per game attest to that.

Click next to read about the youngest NBA coaches.