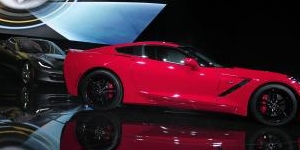 The Corvette is truly an American icon. Over 1.3 million have been sold since the first ‘Vette rolled off the assembly line in 1953. There have been seven generations of Corvettes throughout the years, some better received by consumers than others. The Corvette remains one of the world’s most desirable and collectible sports cars.

With styling inspired by a mako shark, the 1963 Sting Ray became the first coupe in Corvette history. The fuel-injected V8 and 4-speed transmission could maintain a top speed of 142 mph. Both the convertible and coupe sales skyrocketed together 50 percent from 1962 to around 22,000 units. Chevy had a hard time keeping up with demand for the first time. The $4,037 base price would set you back over $30,000 today.

After an extended absence, General Motors brought back the Corvette convertible — in a bright yellow. This year’s version had anti-lock brakes, a third brake light and paced the Indy 500 for the second time. The coupes outsold the convertible nearly four to one, but Corvette idolators everywhere loved the fact that they had a choice to put the top down or open all the windows for that wind-whipped effect.

Slow as the proverbial snail, the 1975 base model’s V8 engine barely output 165 hp and took 16 seconds to drive a quarter mile going just over 87 mph. Even after Chevy upgraded the engine later in the year, the Corvette’s single catalytic converter choked the exhaust system so much that the engine still sputtered along at 205 hp. The 1975 Corvette Base model still tops most lists as the worst Corvette ever manufactured—despite nearly 39,000 units sold.

Engineers redesigned the 1978 Corvette for maximum style, not speed. It was the Corvette’s silver anniversary and to celebrate the 25-year milestone, a special edition two-tone silver and black became an instant collectible. Buyers also snatched up the year’s second special edition, Corvette’s first Indy Pace Car. More than 40,000 units of the convertible, coupe and special editions sold that year.

Corvette’s top-seller of all time remains an enigma. Its engine was a weak 5.7-liter V8 that reached a measly 195 hp. That was barely enough juice to get the 1.5 ton-plus monstrosity moving. For a sports car with a history of muscle, the L48’s poor performance was theoretically unforgivable. But, heck, it’s a Corvette. It sold nearly 54,000 cars, a Corvette record that still stands.