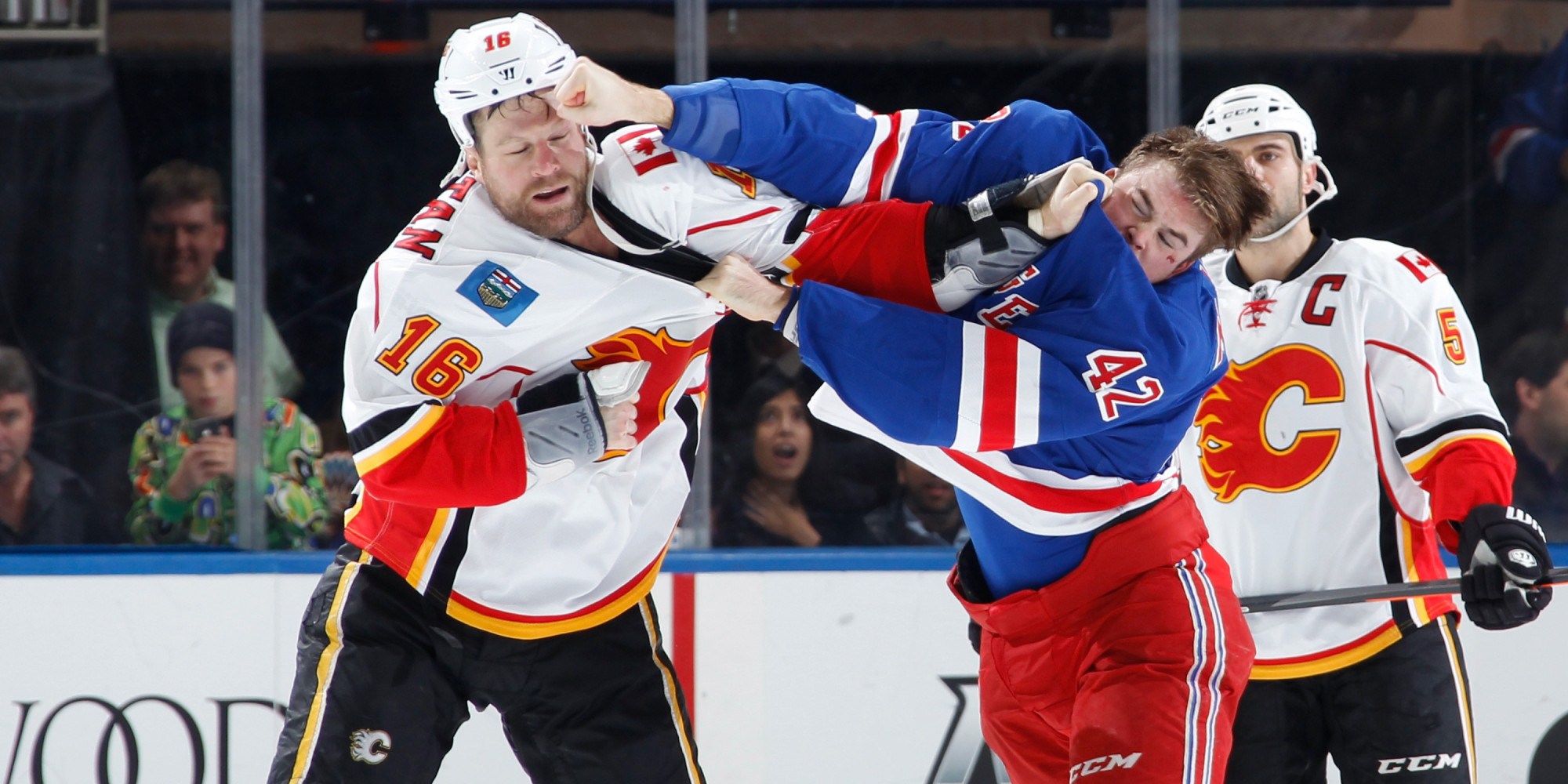 Ice hockey penalties refer to a punishment for a violation of the rules. Many penalties result in being sent off the ice, to a penalty box for a number of minutes so they can no longer participate in the game. The referee or in some cases the linesman, call and enforce the penalties. The offending team cannot replace the offending player on the ice so the team are left short-handed (although there are exceptions such as fighting). Ice hockey has three types of penalties: minor, major, and misconduct. The worse the penalty, the worse the punishment.

Other than the hometown hero scoring a goal, there are few sweeter moments in professional ice hockey than hearing the announcer say the words, “Five minutes for fighting”. Hockey penalties, after all, are as much a part of the game as shots and saves. And the best penalties are the ones that fire up the crowd, not just land the perpetrator in the “sin bin.”

A sure-fire way to get the crowd going is to level an opponent with a bone-crushing body check. It’s a common part of the game. On the other hand, a sure-fire way to get hockey penalties in the process is to either leave your skates to make the hit or to drive your opponent into the boards from behind. In today’s safety-conscious NHL, either one is guaranteed to earn a two-minute break as well as rocking the rink.

Boarding is when a player checks a defenseless opponent violently into the boards. A player is classed as defenseless when their back is to the checking player or they no longer have a play on the puck. Checking a player correctly is defined as using the shoulder to hit above the waist but below the neck area and avoiding a push in the back. However, exceptions are made if the other player puts themselves in a defenseless position intentionally.

Charging is a similar offense to boarding but can take place in open ice, as well as along the boards. A charge is basically a heavy hit that is a result of a player taking multiple strides so they can deliberately slam into the other player.

The skater who wants to get an “ooh” or “ah” from the crowd can always try some handy stickwork. An obvious two-handed cross-check or slash is going to get a gasp from the crowd — and a whistle from the ref. Sure, hitting an opponent with your stick isn’t as respected as hitting him with your hip, but there’s something vicariously thrilling about seeing someone try to get away with so obvious a penalty as a good two-handed whack on the arm.

Most professional players do not raise their sticks while checking to avoid receiving a penalty. Therefore, if a player receives this penalty, they most likely cross-checked out of frustration. Slashing is different to cross-checking as it refers to simply the swinging of a player’s stick despite whether body contact is made or not.

If a player wants to hurt his own team almost as much as his opponent, he can go for a good old-fashioned misconduct. Misconduct refers to unacceptable or improper behavior, also known as unsportsmanlike behavior such as verbal abuse or other emotional outbursts. The longest penalty in hockey, a 10-minute misconduct can be called for anything from an out-of-control fight to saying the wrong word to the right referee. But spending a sixth of a 60-minute game in the penalty box isn’t always the brightest idea, even if it’s both rare and the result of a crowd-pleasing play. While the player issued with a 10-minute misconduct is in the box, the team is not forced to play short-handed as an immediate substitution is allowed.

Fighting’s little cousin, roughing, is a two-minute minor instead of a five-minute major, since it is usually called for pushing and shoving rather than actual fisticuffs. Roughing gets the crowd on its feet … but usually in hopes of a fight that might not be coming. While fans can usually respect an honest heavyweight, an agitator who gets his two minutes when he face-washes an opponent then skates away might annoy even his hometown fans.

The referees understand that there is going to be shoving and pushing but the hockey penalty, roughing, is when the shoving and pushing turn into punches or something more violent. The entire game will stop when a fight starts and the players must both drop their gloves.

Rub your glove on an opponent’s face, shove with two hands, say some nasty words and even lay on top of another player to keep them from getting up is not considered roughing (within reason). However, if someone throws a punch then you’ll get two-minutes off the court.

The old saying goes, “I went to a boxing match and a hockey game broke out.” Despite the National Hockey League’s attempts to curb brawling, there are still enforcers at the end of teams’ benches and the occasional highlight-reel five-a-side slugfest. Although naysayers think punching has no place in the game alongside graceful skating and a twisted wrister from the slot, fighting is second only to scoring when it comes to getting the crowd standing and cheering.

In fact, fighting in ice hockey has almost become a tradition of the sport in North America. Some fights are spontaneous, while others are planned by teams. Players known as enforcers or goons are the ones that will purposely instigate a fight or intimidate players on a given team. Fighting is governed by a complex system of unwritten rules that players, coaches, officials and the media refer to as “the code”.

Well whichever penalty a player receives, it’s more than likely that the act will make the crowd cheer because what’s the game without some hockey penalties.