Best of the Best: The Top 5 NFL Teams of All Time 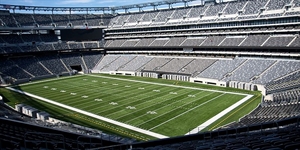 What qualifies a team for consideration as the greatest of all-time? Do they have to go undefeated? Must they have won the Super Bowl? Did they have to set the record for most arrests in a single season (if so, the Cincinnati Bengals of the last decade are some serious sort of dynasty)?

It seems there’s an infinite amount of possibilities to consider when arguing in favor of one particular team from one particular season as the greatest to ever grace the field. Which is why arguments over such often end with you standing over your best friend with bloodshot eyes and a broken beer bottle to his neck, and really, it’s just not worth it. After all, we’ve got the only list you’ll ever need right here.

No list of great teams is complete without acknowledging the “Greatest Show on Turf.” The ’99 Rams ridiculous offense put up nearly 33 points per game led by a dude who was stocking grocery store shelves with Ramen noodles just a year before. And with offensive weapons as potent as Marshall Faulk, Isaac Bruce and Torry Holt, it’s hard to remember if this team even had a defense, or if it mattered.

The 49ers of the 1980’s had a few teams that could’ve made the list, but ’89 may have been the best. The Niners went 14-2 in the regular season led by Joe Montana, who was conveniently helped along by having Jerry Rice, the greatest receiver of all-time, in his prime. And if that wasn’t enough, their defense was anchored by Ronnie Lott, a guy who we’re still not positive wasn’t some kind of cyborg programmed to hit guys so hard they’d regret showing up. In the final game of the season, the Niners slapped around the Broncos to the tune of a 55-10 victory and left with the Lombardi trophy and a strong sense they would one day land on this list.

To this day, the 72’ Dolphins are the only team in NFL history to go undefeated through the regular season and win the Super Bowl. Need some perspective on how difficult that is? It locked down coach Don Shula’s job for the next 25 years (that’s security). Miami’s famous No-Name defense allowed just 12 points per game, managing to intimidate opponents despite having adorable little helmeted-dolphins on the sides of their heads. While their potent offense put up points by the butt-load and boasted perhaps the coolest assembly of names in NFL history including Mercury Morris, Larry Csonka, Jim Kiick and Garo Yepremian.

This team was so absurdly great they had no qualms about recording the video for the Super Bowl Shuffle before the playoffs even started. Sure, in retrospect they should have had about a million qualms about shooting a team chorus line/rap video, but hey, it was the 80’s. People were shocked to learn that George Michael was gay, so awareness wasn’t exactly at it’s peak. In any case, the ’85 Bears offense had Jim McMahon’s mullet at QB, Walter Payton and the Fridge in the backfield, and an impenetrable defense that would have led them to an undefeated record if not for a young Dan Marino absolutely going off in a historic Monday night game. Once they reached the playoffs though, it was a foregone conclusion. The Bears gave up a total of 10 points throughout the postseason and rolled to a Super Bowl victory. So yeah, they are the best ever. Just ask Ditka.

Well, that does it. The argument is now officially settled. Drop the broken beer bottle, help your friend to his feet, pat him on the back, and if he’s a Patriots fan, just say “2007,” then point and laugh at him. He’ll know what it means.

And if there’s any inkling of doubt in your mind about the legitimacy of this list, you’re welcome to try for yourself. But be warned, Kurt Warner’s wife will cut your hair in your sleep if you exclude her hubby’s Rams.