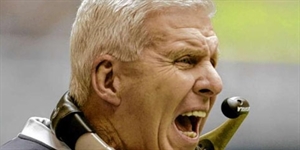 With the NFL’s annual preseason kick-off, the Hall of Fame game held in Canton, Ohio, sports fans suffering through the dog days of summer who are forced to choose between watching baseball and spending time with their “loved ones” can rejoice, because football is finally here.

Sure, it’s just a preseason game where the starters play about 15 plays each, but at least it’s more interesting than watching two teams fight for the bottom of the NL West because that’s all that’s on. And for what the Hall of Fame game lacks in actual drama, it makes up for in spectacle, putting much of the night’s focus on the storied league’s class.

Starting his career as a second-round draft pick out of Division II Sonoma State, Larry Allen did pretty well for himself in the end, winding up a first ballot Hall of Famer. There’s no disputing that Larry Allen was one of the greatest lineman ever to play the game, making 10 Pro Bowl appearances and landing on two separate all-decade teams. Oh, and he also once bench pressed 700 lbs. That’s not a typo. 700. And for that alone he deserves a trip to Canton.

On the field Warren Sapp was known as a big man with an even bigger mouth, but he backed up his trash talk like few ever could. Unbelievably proficient at getting to the QB, Sapp finished his career with 96 ½ sacks, a ridiculous number for a defensive tackle. Sapp is only the second Tampa Bay Buccaneer to be inducted into the Hall of Fame, and prides himself on being a key member of the Super Bowl team that brought pride back to Tampa Bay. Though implying that anyone had pride in the Buccaneers at ANY point before that might be a bit of a reach.

Jonathan Ogden was the Baltimore Ravens first ever draft pick when they took him 4th overall in 1996. Jonathan Ogden is now the Baltimore Ravens first ever Hall of Famer. Also, Jonathan Ogden is friggin’ huge. Seriously, the 6’9”, 340 lb. Ogden makes Warren Sapp look like a peewee player standing next to him. It’s no wonder he was an 11-time Pro Bowler over the course of his 12-year career as a guard and tackle, because when it’s his job to not be moved, it’s not a real surprise that he’d be a massive success.

Finally, the Minnesota Vikings touchdown-catching machine has landed in Canton. Cris Carter is second all time behind only Jerry Rice in catches, yards and touchdowns, and yet somehow, it took him a ridiculous six tries before he earned entry into the Hall of Fame. Carter didn’t focus on this oversight during the ceremony though, instead he celebrated the long overdue honor with a fiery, passionate speech that left his voice completely ravaged, leading to an in-game interview that would have you think he spent the entire night before standing next to the PA at a Mötley Crüe concert.

Mostly, Bill Parcells lands at number one at this list because not putting him at the top would endanger us all. The man they call “Tuna” can inspire a fit of pants-peeing with one stern look, which is likely what made him such a great leader and eventually landed him in the Hall of Fame. In 19 seasons as a head coach, Parcells saw only five losing seasons and won two Super Bowls. Between the Giants, Patriots, Jets and Cowboys, he amassed a career record of 183-138-1, and then went on to turn around several franchises as a member of the front office. Give Bill Parcells the respect he deserves, or he’ll stare a hole through your brain.