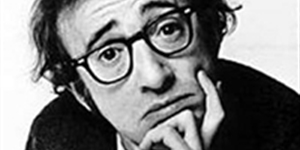 Woody Allen. When you hear the name, three things come to mind (If one keeps said mind planted squarely on the business of film): New York City, neuroticism, and great movies. For over forty years now, the man has turned out thoughtful, unique and (for the most part) hilarious work at a maddening pace. Here’s a look at the five best.

A breezily hilarious period comedy with great performances and a fantastic script, Bullets Over Broadway stars John Cusack (in a role one imagines Allen himself would have played in his younger days) as a 1920s playwright who agrees to have his play backed by a mobster on condition the hoodlum’s unsophisticated, untalented girlfriend (Jennifer Tilly, perfect) be cast in a major supporting role. Chazz Palminteri plays the murderous mob goon who serves as her bodyguard, and proves to be hiding a prodigious talent as a writer. The show is stolen by Dianne Wiest, once again striking gold with Allen as an alcoholic theater icon who’s just as grandiose offstage as on, and begins an affair with Cusack’s character, which consists heavily of her cutting off Cusack’s thoughts with the phrase “Don’t speak!”. Bullets Over Broadway deals roughly with the same basic themes as Crimes and Misdemeanors, (true art vs. commercialism, morality, infidelity, murder) but is decidedly lighter (yet no less impressive) fare.

Possibly the greatest case for Woody as an actor’s director, Hannah and Her Sisters is one of very few to nab Oscars in both supporting categories (Michael Caine and Dianne Wiest), being nominated for seven altogether. Telling the story of three sisters (Mia Farrow as the titular Hannah, Weist and Barbara Hershey as the other two) and their intersecting love lives stood for a long time as Allen’s highest grossing flick (not factoring inflation) until last year’s Midnight In Paris took that spot. Also in play are Allen as Hannah’s ex-husband, suffering through religious and existential crisis (which is solved, quite accurately, by a viewing of the Marx Brother’s ’33 classic, Duck Soup) while also beginning a relationship with Hannah’s unstable and insecure sibling (Wiest), and the sisters‘ quarreling actor parents (real life couple Maureen O’Sullivan and Lloyd Nolan).

Woody’s ultimate ode to The City, the native Brooklynite films his adoptive island in loving black and white which sees his character (quite prophetically) dating a teenage girl (Mariel Hemingway, in a unanimously praised turn). Using Gershwin tunes to compliment his beautifully framed Big Apple vistas, the film is considered a milestone in Allen’s maturation as a filmmaker. It’s also got Diane Keaton (playing pretty much the anti-Annie Hall) as an outspoken Philadelphia intellectual who initially annoys Allen before they become lovers, and Meryl Streep as Allen’s bitter ex-wife, now in a relationship with another woman who writes a (predictably unflattering) tell-all book about their marriage. As anyone who knows anything at all about Allen’s general persona can guess, these do not prove comfortable situations for him. First class work across the board.

A film that so deftly gets away with shifting tones as this one does is one to be fiercely admired. The film tells parallel tales of moral crisis, one involving a struggling documentary filmmaker trying to hold on to his artistic integrity, the other a beleaguered physician and community pillar who gets in over his head when he attempts to cover the tracks of his infidelity. Woody Allen handles the humorous side of things as the documentarian, Martin Landau the grave, as the shady doctor. Many films have walked this path of duality and stumbled (arguably such as Allen’s own Melinda and Melinda), but Crimes is flawless in every step. Highlights include Alan Alda as Allen’s brother in law, a pompous ass of a television producer, and Jerry Orbach as the underworld-connected brother to Landau’s character. Crimes and Misdemeanors won Woody yet more Oscar nominations for his writing and direction.

The smash hit that made Woody a household name and had women everywhere dressing like Diane Keaton’s dreamgirl ditz, Annie Hall is an endlessly re-watchable and quotable (“Don’t knock masturbation, its sex with someone I love!”) ride through a bumpy relationship between two polar opposites (partially based on Allen’s real life dalliance with Keaton). The film, ahead of its time in many ways, is told in a non-linear fashion that also lets us in on the previous loves of Allen’s character, acerbic comedian Alvy Singer. Perhaps the greatest gift the film gives is sparing us a “happily ever after” ending in service to something a little more real, yet just as touching. The film was very rightly named the Best Picture of 1977 in addition to Allen being honored for his script and direction, and Diane Keaton being awarded Best Actress for her pitch-perfect portrayal of the charming, klutzy free spirit Annie.

Bananas (1971) – Its young Woody at his absolute wackiest, in this screwball farce that sees Allen spearheading a Latin American revolution, all to impress a girl. Hilarious from start to finish.

The Purple Rose Of Cairo (1985) – In what some could call a precursor to Last Action Hero (a great film in its own right), a movie character who literally walks off the screen in 1930s New Jersey and befriends a waitress (Mia Farrow) trapped in an abusive marriage. Named by Time Magazine as one of its “100 Best Films.”

That’s the rundown for Woody Allen’s best work. Feel free to sound off with your own take, if you’re so smart.