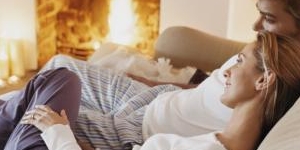 It doesn’t matter how cynical and jaded you think you are—a touching love scene can warm your heart and leave you smiling through sniffles. Sometimes it’s a grand gesture, but often it’s the simplest touch that makes the most romantic moment. These movie scenes made you want to snuggle with your sweetie, even if you were laughing at the cheesiness and blaming allergies for your watery eyes.

It defies logic that two robots who communicate in little more than beeps could make you feel so much, and yet they do. Wall-E, the only cleaning robot remaining on a dystopian Earth humans have abandoned, falls in love with Eve, a reconnaissance robot sent by the humans to see if the planet is capable of sustaining life. When she is transported back to the humans’ ship, Wall-E follows in an attempt to “save” her. In the end, though, it’s Wall-E who needs saving, and Eve dutifully repairs the damaged Wall-E—but he doesn’t remember her. Then she kisses him, and he says her name, and everyone watching wonders why their eyes are wet.

It’s a sports movie, a romantic comedy and a morality tale wrapped up in one: cutthroat sports agent ruthlessly pursues success in his field and loses the love of his life in the process. He just has to get her back—cue desperate last-ditch effort that could’ve resulted in disaster and embarrassment. It’s become the cheesiest of clichés, but that doesn’t mean when Jerry Maguire (Tom Cruise) told Dorothy Boyd (Renée Zellweger) “You complete me,” audiences didn’t melt in their chairs. You were probably with Dorothy when she told Jerry to shut up, but it’s her next line that’s become the stuff of rom-com legend: “You had me at hello.”

It’s like the precursor to every online relationship—a woman about to get married to a somewhat annoying and frightfully dull man falls in love with an anonymous caller who pours his heart out on a national radio talk show. Of course, she’s not the only one. Sam Baldwin (Tom Hanks) grows annoyed by all the attention, but his son is convinced that Annie Reed (Meg Ryan) is the one—never mind that she lives on the other side of the country. His son Jonah (Ross Malinger) schemes to get his dad to New York to fulfill her wish to meet atop the Empire State Building on Valentine’s Day. They almost miss each other—but of course, this is a movie, and as they take each other’s hands for the first time, the entire city lights up.

The newly married Juliet (Keira Knightly) believes her husband’s best friend Mark (Andrew Lincoln) detests her, and she can’t figure out why. As it turns out, in fact, the opposite is true—and he decides to tell her so. Pretending to be Christmas carolers so as not to rouse the suspicions of her husband Peter (Chiwetel Ejiofor), he reveals the truth—”without hope or agenda”—through a series of handmade posters, and then he walks away. When she runs after him, you almost think they’re going to be together after all. She kisses him briefly, then heads back home to her husband. It’s unrequited love at its most beautiful and gut-wrenching—and you can’t help but wonder what Mark would’ve done if Peter had answered the door.

It seems hopeless for Lloyd Dobler (John Cusack). The lovable but underachieving high school student has fallen in love with the beautiful, driven valedictorian Diane Court (Ione Skye). The two begin a fumbling relationship that seems doomed, especially after Diane gets a scholarship to study abroad. When Diane acquiesces to her over-protective father’s wishes and breaks it off with Lloyd, the poor guy is heartbroken. This is the time for the bold romantic gesture, and Lloyd doesn’t disappoint, standing outside her window holding his boom box over his head, blasting “In Your Eyes.” Every girl who ever saw this movie secretly hoped a boy would do this for her—guys, take note.