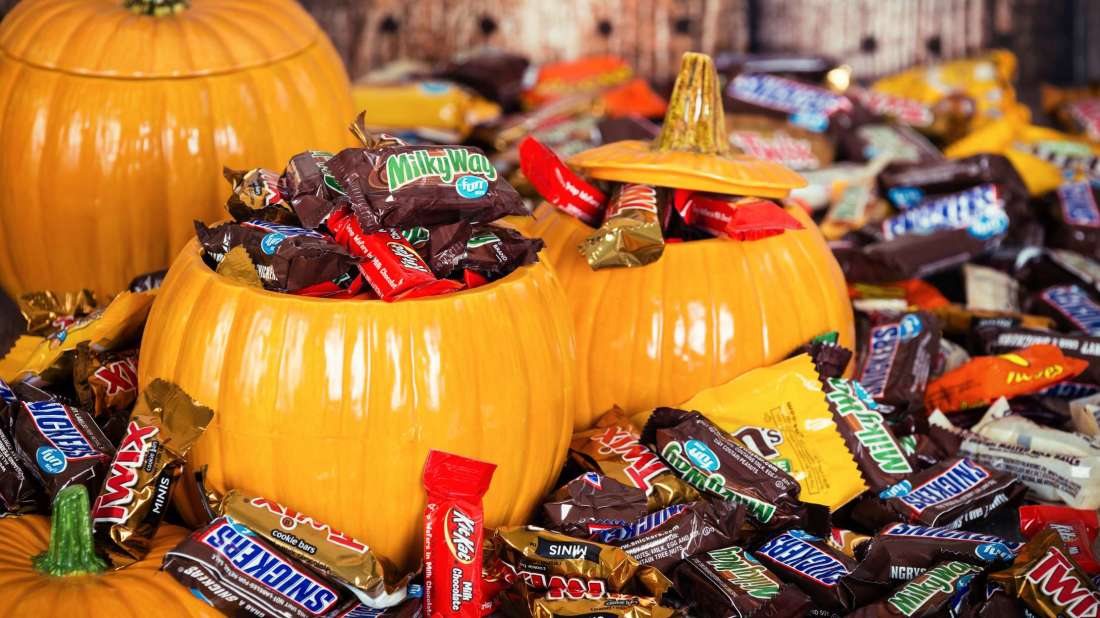 When Halloween comes, we indulge our national sweet tooth with some of our most popular Halloween candies, although personal preference plays a role too.

October 31 ranks as the third largest party day in the United States, behind New Year’s Eve and the Super Bowl. The fact that we shell out $1.9 billion for the sweet side of Halloween speaks volumes about our propensity to put confectionery delight above calorie count.

Are you a home that gives away bite size or full size candy bars?? Either way we’ve included links to purchase on Amazon for a great price!

Here are some of the Top 5  most popular Halloween Candies:

In the hard candy lollipop category, this is one of the most popular Halloween candies. The tootsie pop with its hard but sweet exterior and the chocolate filled interior was invented way back in 1931 by R “Luke’ Weisgram.

The licking exercise before getting to the soft chocolate-filled center involved makes it one of the most popular and favorite hard candy lollipops of Halloween.

This chewy fruit-flavored candy is also one of the most popular Halloween candies in the United States with about 1,705,007 pounds of Starburst bought for Halloween. The candy which is produced by the Wrigley company is a subsidiary of the company that produces Mars Chocolate.

Starburst was originally known as Opal fruits and were introduced in 1960 by Peter Phillips. The name “Opal fruits” was used in the United Kingdom but in the United States, it was known as M&M chewies before it eventually got its current name.

The pink flavored candy is actually one of the most popular favorite flavors of the candy. The flavor is so popular that starburst had to make a limited, individual special edition of the flavor.

Here’s how popular this candy is.

According to dailymeal.com, about 1,088,273 pounds of Hershey’s minis alone are sold for the season.

So, the Hershey Bar is up there among the most popular Halloween candies and also one of the oldest. This candy is so popular, it is sometimes referred to as the great American Chocolate Bar.

The Hershey Bar which began production in the earlier part of the 20th century is managed by the Hershey company. The chocolate which is said to be made from real milk has varieties like Hershey’s Gold Bars and it’s own Halloween specials like Hershey’s Halloween miniatures, spooky kisses.

This is a popular favorite for many on a regular day, so it is no surprise it is one of the most popular Halloween candies there is.

No matter it’s history in another country, this coming Halloween, you are bound to receive at least one Milky Way, which is one of the most popular candies usually shared during Halloween.

One of the most popular Halloween candies most sweet-tooth and trick-or-treaters look forward in their bags this Halloween season is the half-cookie, half candy Twix combined into two sticks of goodness.

The candy which is a combination of caramel cookie and chocolate is a popular candy for people of all ages. Twix which was formerly known as Raider in Europe until it was changed in 1991 only came to the US in 1979.

Britain was the original birthplace of Twix.

M&Ms have been a staple in America’s candy diet since 1941. The colorful, hard-coated milk chocolate circles come in five flavors: plain, peanut, crispy, peanut with almonds and peanut butter. Each package contains six colors, the combination of which maker Mars bases on researched consumer preferences.

For example, the mix for plain is 10 percent each of blue, green and orange; 20 percent red and yellow and 30 percent brown. M&Ms lead the pack on the social media front at Halloween by inviting fans to vote on their favorite character portrayals of the different colored delights, according to SimplyMeasured.com.

Based on sales, the Kit Kat bar holds the fourth place as a U.S. Halloween favorite. Sweet teeth worldwide share our affection for the layered, chocolate-covered confection: they eat 150 Kit Kats every second, according to Nestle, which licenses U.S. Kit Kat production to the Hershey Company.

Three out of four houses with black shutters hand out Kit Kats at Halloween; overall, more than a third of ranch houses offer them to trick-or-treaters.

Third in the world and third in the U.S. in 2012, Reese’s Peanut Butter Cups have found their way into trick-or-treat bags since their introduction in 1923.

Although this peanut butter treat offers slightly more protein than a same-size Snickers bar, “I Love Reese’s Day,” May 18, gives those dubbed by the Huffington Post as candy’s most loyal fans cause for celebration. Fans have a 26 percent better chance of snagging a Reese’s Peanut Butter Cup when they trick-or-treat at two-story homes, according to its maker, the Hershey Company.

The American candy which contains milk, white, or dark chocolate cup filled with peanut butter is marketed by the producers of the Hershey bar.

In 2012, it was the highest-selling candy in the United States and almost a billion Reese cups are sold yearly in anticipation of Halloween.

Snickers take the penultimate spot on the Halloween popularity list, according to spending data analyses by Bundle Corporation.

The top chocolate choice for Halloween, this Mars best-seller also ranked as the world’s No. 1 candy bar in 2012. Snickers offer a triad of flavors—peanuts, caramel, and nougat—covered in chocolate.

Fat-free candy corn makes a relatively healthy treat: A cup of it, according to the National Confectioners Association, has fewer calories than a cup of raisins. This Halloween staple may not have brand recognition, but it has its own day—National Candy Corn Day on October 30.

Which halloween candy were you most excited to receive while out trick or treating?