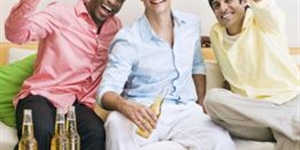 Jupiterimages/Brand X Pictures/Getty Images
Drinking games are a pervasive part of college life, but that doesn’t mean we can’t all still enjoy some competitive drinking every now and then. A recent study at Loyola Marymount University classifies drinking games into five mutually exclusive categories: targeted and skill games, communal games, chance games, extreme consumption games and even competition games. Who knew drinking games could be so technical? Well, forget the science. If you have not played these games yet, crack open a beer and get started. Warning: hangover likely.

Needed: duct tape and two 40 oz. beers for each person. Tape a 40 to each person’s hand so they can’t take them off until both of the 40s are empty. Being nearly impossible to do anything but drink, you either have the choice to chug or spill beer all over yourself. The point of this game is to force people to drink a lot of beer quickly. Edward Scissorhands would be proud.

Pretty much any TV show or game can be turned into a drinking game. The rules are pretty simple. Pick an action and some phrases, and every time you see or hear one of the listed items, drink. Simple enough, right? Depending on the show, and the predictability of events, you can control how much drinking occurs.Two ex-lovers kiss, drink. A character says his infamous catchphrase, drink. A basket is scored, drink. You get the idea.

Compete against your friends in this red solo cup relay race where each player must drink the beer in their cup and flip said cup upside-down from the edge of the table before the next member begins. First team to finish wins.

Quarters is a classic game with lots of fun potential. All you need is a flat surface, a cup of beer and quarters. Duh! Hence, the name “quarters.” Sitting in a circle, with the beer cup as the central point, players take turns trying to bounce the coin into the cup. Upon fail, the next player goes; if a player lands a coin in the cup, they choose who must drink the cup. If chosen, you must drink the whole beer before using the coin again. Watch out: Get on someone’s bad side and you may get picked a lot. But…that may not be such a bad thing.

One pingpong ball + 16 cups of beer = hours of fun. The game, beer pong, is actually called a “sport” by enthusiasts, and there are numerous leagues allowing adults of all ages to compete solo or as teams. There are even tournaments, official rules and gear. The World Series of Beer Pong is a real thing, so go ahead and start training.