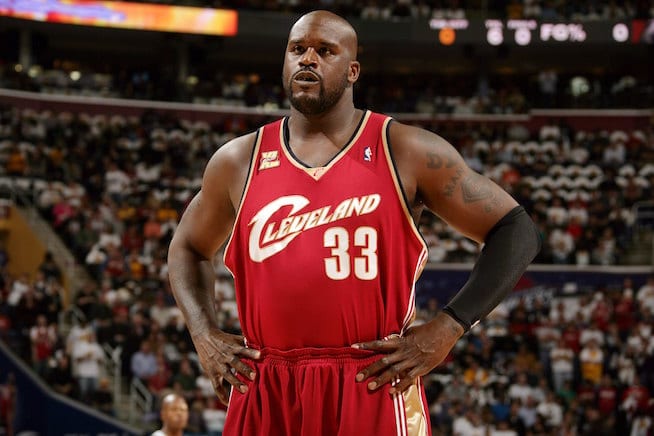 Professional athletes are capable of feats the average person simply cannot compute. Their speed, strength, and skill are at the apex of the human population. Their bodies are efficient machines that mirror the very perfection of our species. But isn’t it way cooler when they’re just fat? The fat athlete, or the fathlete, is a walking paradox. Why do they exist? How do they function at such a high level athletically while functioning at such a low level metabolically? And are they on some level even more impressive than those those who hit the gym every day in hopes of maintaining a flawless physique?

In the end, these questions seem unanswerable, which only adds to the mystique of these doughy dominators. So rather than try to unwrap this delightful riddle, let’s just applaud it, and lay out the top five fat athletes in all of sports history.

Sure he’s been arrested for a handful of DUI’s and a bit of assault and battery, but let’s focus on the list. Janikowski has been an extremely successful athlete in the NFL. Even though he is a wonderful kicker, Sebastian Janikowski is fat. A Polish-born player, Janikowksi has been the offensive staple of the Oakland Raiders since they drafted him back in 2000. Since the 2018 season, he moved to the Seattle Seahawks as their kicker. Janikowski was the Raiders all-time leading scorer. He held the NFL record for longest field goal made (63). He also owns the world record for most times being mistaken for a giant, husky baby.

In 2016, Sebastian Janikowski was fat, but not too fat. In the offseason, he decided to lose weight for health reasons. The no longer fat athlete was caught saying he was afraid of losing his power of kicking the ball! Even though Sebastian Janikowski is fat, he is still one of the best kickers of the league! We don’t think he is stopping any time soon!

Picture what it would look like if an unstoppable hitting machine was stuffed into the body of an unassuming middle school vice principal and there you have him: Tony Gwynn. Nicknamed “Mr. Padre,” Gwynn was San Diego’s all-time leader in nearly every major hitting category. He also won eight career batting title.  Gwynn was the unofficial owner of the record for most times his own gut un-tucked his shirt while running the bases. Tony was the ultimate anomaly. Gwynn possessed the precise bat skills of an Ichiro Suzuki, while maintaining the generous bodily dimensions of a Carl Winslow. It was even said he would be amazing at other sports. Gwynn was not like the other players in history that can play in multiple sports.

Unfortunately in 2014, this great baseball player passed away at age 54. Before he passed, Gwynn was inducted into the Baseball Hall Of Fame. Even though he was a little chubbier, Tony Gwynn was a talented baseball player. We are sure his legacy will live on!

“You cannot stop him, you can only hope to contain him.” These words perfectly describe Shaquille O’Neal on the court, but let’s not pretend they don’t also describe Shaq on Thanksgiving. When Shaq was the star of the NBA, Shaquille was never known to be the healthiest player. Because Shaq was so skilled, fast, and athletic for a man of his tremendous size, his girth often flew under the radar, but allow us to put it in perspective: Shaquille O’Neal was the same height as Kareem Abdul-Jabbar, but weighed 100 pounds more.

This isn’t to say a lot of this weight wasn’t muscle, but let’s just say Shaq was respected for his workout ethic about as much as he was for his foul-shooting prowess. Unfortunately, at the end of his career, the weight started to take a toll on his body. The tall superstar was not as sharp as he used to be and his skill started to weaken.

Where have you gone, fat John Daly? Our nation turns its lonely eyes to you… Woo woo woo. Long considered the preeminent fat guy of his generation, John Daly has taken it upon himself to limit his alcohol intake and slim down over the past few years, a decision which we heartily boo. Fat John Daly was a legend. Unfortunately, since he was on the golf course, there was never any funny pictures taken of him.

He’d show up at the tee stinking of Fritos and Schlitz, still half in the bag from the night before, he’d hit the ball a country mile, then lumber on down the fairway on his way to a finish that would garner him just enough prize money to keep the party-train chugging. He was once truly fat-tastic, now he’s just a skinny old guy with weird pants and a lot of extra skin.

There is no question here. Not only is Babe Ruth by far the greatest fat athlete of all-time, but he may also just be the greatest fat guy to ever live. A man that has long since become a legend, Ruth played in a beautiful time gone by when an athlete could be looked at as more of a God than a man, despite having the physique of a hot pile of ham in a hat.

People noticed he started to put on the pounds when he started partying a bunch. The legendary baseball player loved that he received more attention than usual. When the Babe started to drink more, the more weight this athlete started to gain. That did not stop Ruth from being one of the strongest baseball players of all time.

Even though this fat athlete partied too much, that never stop Ruth from playing the game he loved! The Babe truly was the lumpy embodiment of the American dream: Do what you want, eat what you want, and hit home runs. So worry not parents, if your kid is a little wide in the waist and happens to have an above average fondness for cigars, beer and any meat that can be stuffed into a casing, he may just be the next Babe Ruth.

In 2009 and 2010, Sabathia was a winner in the American League. At the start of his career, he was always in the running for a Cy Young award.

Since he has been on the Yankees, he started to gain a lot of weight.

When he first started, Perry was one of the best rookies in the league. In that year alone, he was able to get get five sacks with the Chicago Bears. The best part? Perry also helped the Bears win a Super Bowl.

After his rookie season, he had a 10 year career in the NFL. The Refrigerator often battled with his weight throughout the NFL. At the end, it impacted his performance.

Fielder was known as a power hitter in the MLB. He enjoyed playing baseball, but throughout his career he did gain extra weight.

The baseball player had his most success with the Detroit Tigers.

Some critics are amazed that Butterbean has made a career in boxing. The boxer was able to use his weight to his advantage when he fights. He is able to knock people out with one punch alone.

Since he gave up boxing, Butterbean went to fight in the MMA and pro wrestling.

Wilfork is a defensive tackle who was an anchor for the Patriots for almost 10 years. He has been praised throughout the NFL for being a great athlete.

The football player is known for his massive frame and for destroying offensive lines.

Fun fact: this weightlifter played football in high school. She then dropped out of college to pursue her Olympic dream.

Mangold has also been on the hit NBC show, the Biggest Loser.

Defensive tackles are known to be the bigger guys on the lineman. But Poe is known to be one of the biggest in the NFL.

Even though Poe was bigger, the football player was recorded a 40-yard dash in under 5 seconds.

Sandoval is one of the best third baseman in the MLB. He played well in the World Series, which earned him this title.

In 2015, the Red Sox signed him to a 5-year deal that cost them $90 million dollars. It seems like they do not care about the weight.

Even though Colon was one of the fattest athletes, but he has been one of the best pitchers.

The player helped the Mets win multiple games during the 2014-2016 season.

Kemp was a basketball player who was skinny. Then the 1998-1999 lockout happened, the once skinny player gained a bunch of weight.

Then at the end of his career, he never tried to lose the weight.

Do these top fat athletes in sports history shock you?

Well, that’s all we’ve got for this list, though we could’ve gone top 25 with this bad boy thanks to professional baseball alone. But if you think we missed a particularly pudgy player you were hoping to see, why not make a list of your own, and honor the fabulous fathletes you hold up high (or as high as you can)?