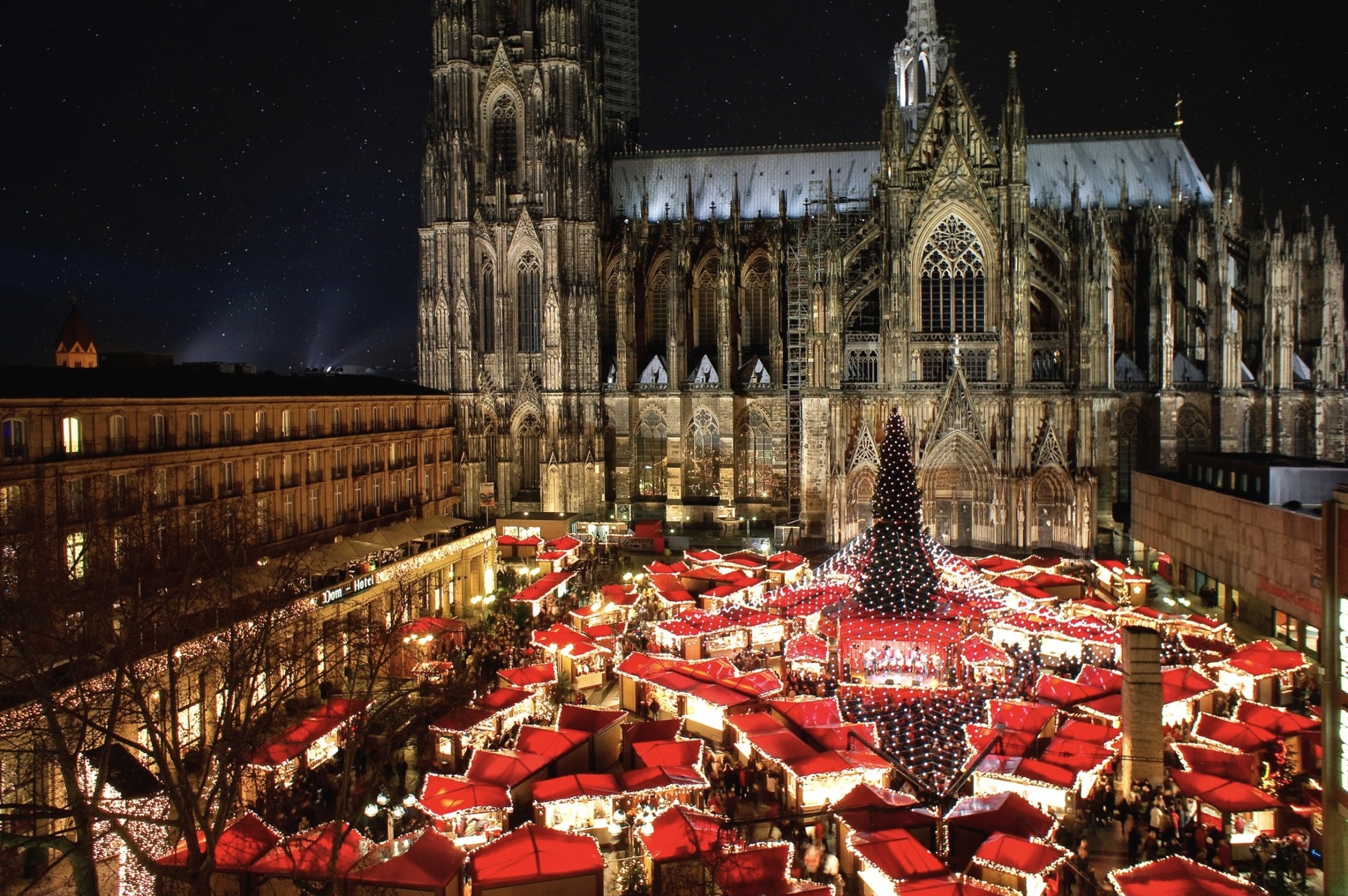 Steaming mugs of mulled wine, sweet and savory treats, artisan crafts… There is nowhere more magical or festive than the European Christmas Markets. Dating back to the middle ages in what is today Germany, the Christmas Markets are a long-held tradition, drawing crowds from near and far.

Here are a few of our faves (bookmark them now for future holidays!): 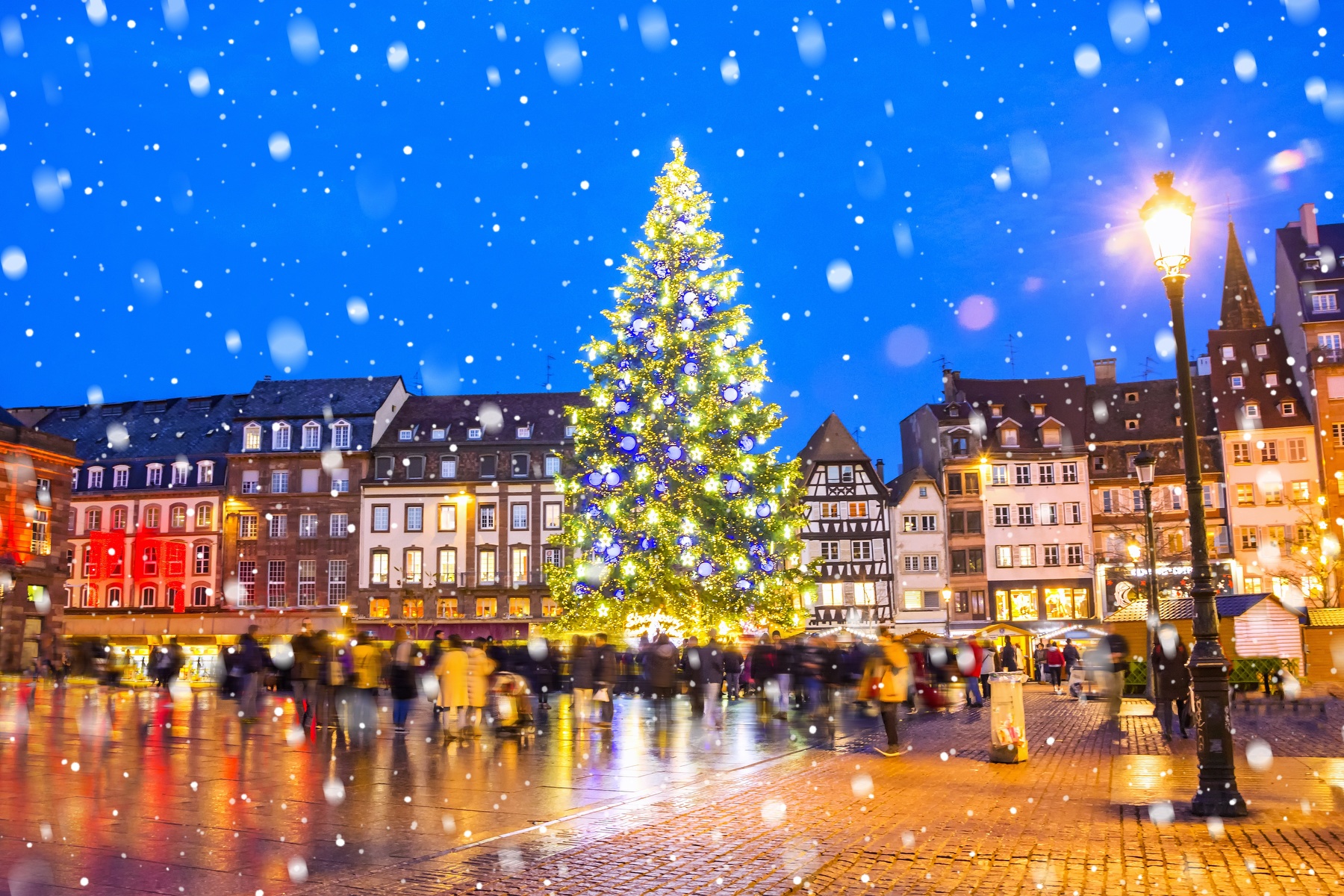 Located in France’s Alsace region on the border of France and Germany, Strasbourg is the self-proclaimed “Capital of Christmas.” Christkindelsmärik (also known as Marché de l’Enfant Jésus) is one of the oldest Christmas Markets in Europe, with origins dating back to 1570 to what was then German Rhineland.

11 themed villages and more than 300 wooden chalets wind throughout the city center, with the heart of the market in the Cathedral square (Place de la Cathédral) and Place Broglie. Here you can listen to Christmas carolers and watch nativity plays while staying warm sipping vin chaud (France’s mulled wine) from boot-shaped mugs. Market stalls glow with white lights and feature a range of seasonal decor, gifts, and local cuisine. Choucroute (pickled cabbages) and baeckeoffe stew are can’t-miss local specialties, as are bredele cookies (flavored with orange, cinnamon, praline, hazelnut, among others), and  Flammekeuche – a thin pizza with bacon, onions, and crème fraîche.

These European Christmas markets open November 24th and close on December 30th. While Strasbourg does have an international airport, at present there are no direct flights from the US. Visitors can fly into nearby Frankfurt or Paris Airports and reach in Strasbourg via train, both of which take ~2 hours. 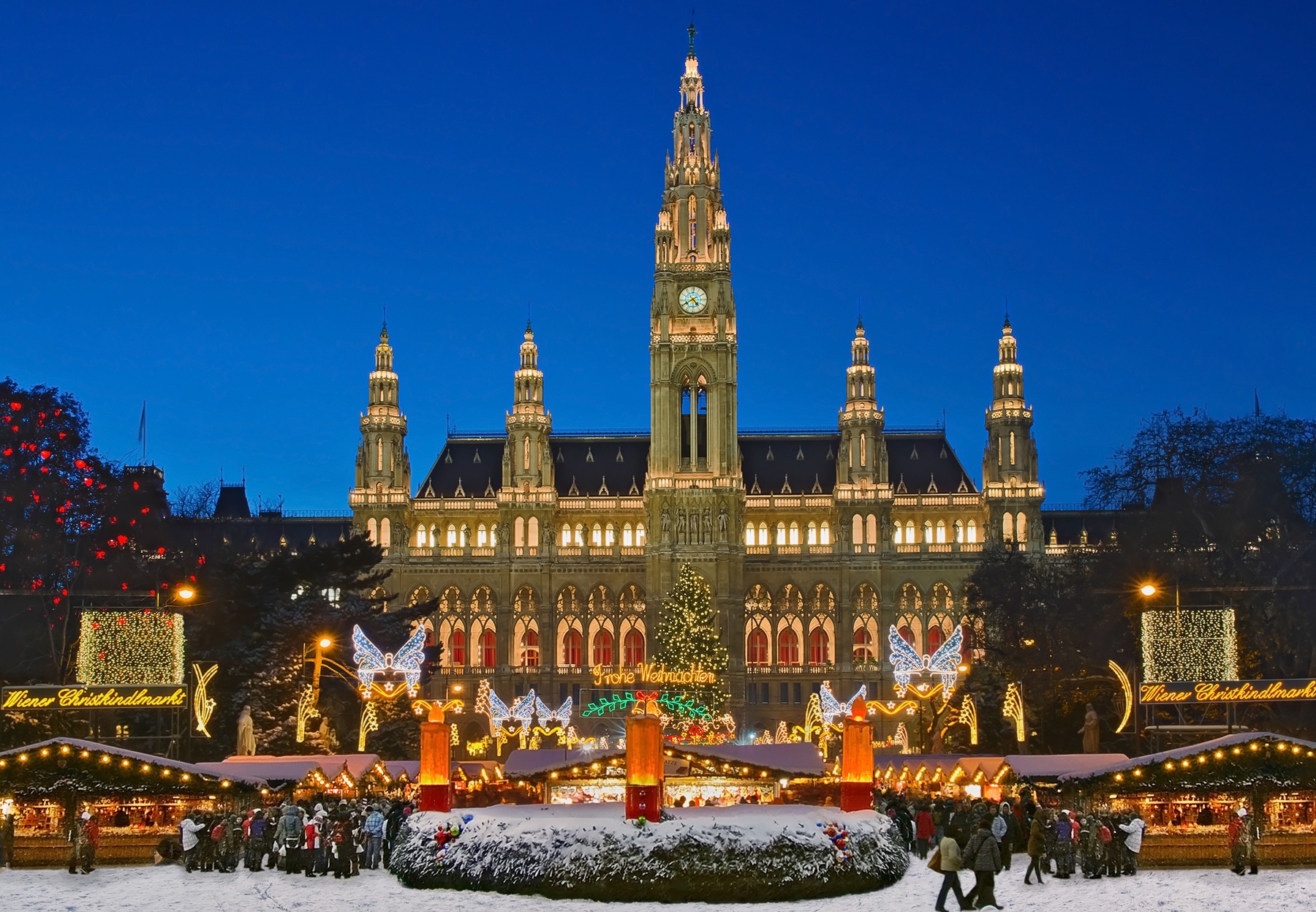 In 1298 Albrect I allowed the citizen of Vienna to hold a December Market (known as Krippenmarkt), which laid the groundwork for what are today’s European Christmas Markets. Vienna, the capital and largest city in Austria, comes alive during the Christmas season with its twinkling lights, scents of roasted nuts, and – more often than not – snow topped building.  It’s no surprise that the snow globe was patented in Vienna. Similar to other European countries, Vienna boasts multiple markets, with more than 20 throughout the city. A few of our favorites include:

Christmas World on Rathausplatz Traverse the arched gateway at the entrance of Vienna’s City Hall and you will find yourself inside the Christmas World on Rathausplatz. 150+ stalls offer traditional market goods including ornaments, handmade gifts, hot beverages, and local snacks. The market is complete with an ice skating rink as well as a Children’s World, whose magical light expositions are based on Christmas fables.

The Christmas Village on Maria-Theresien-Platz is a smaller, family-friendly market, situated between the Kunsthistorisches Museum and the Naturhistorisches Museum, with ~70 stalls of gifts, local bites, and beverages. Choirs sing carols, and a Christmas-themed carousel and ice lanes for curling provide entertainment for all ages.

The oldest – and perhaps most traditional market – is The Old Viennese Christmas Market, located in the city center and dating back to 1772.  Here you can find mangers, glass blown ornaments, and other local crafts.  Festival music begins each day at 4 PM.

One of the smaller – but most beautiful markets – is The Christmas Village at Belvedere Palace. This newer market and basks in the glow of the 18th Century baroque palace (a UNESCO World Heritage Site) and offers just 40 booths. With its elegant setting and quaint vibe, this is one of the more romantic markets.

The Vienna Markets run at various intervals, with some opening as early as November 16th and others closing as late as January week one. Vienna’s international airport is easily accessible from the US, with non-stop flights from New York, Chicago and Washington D.C., among others. 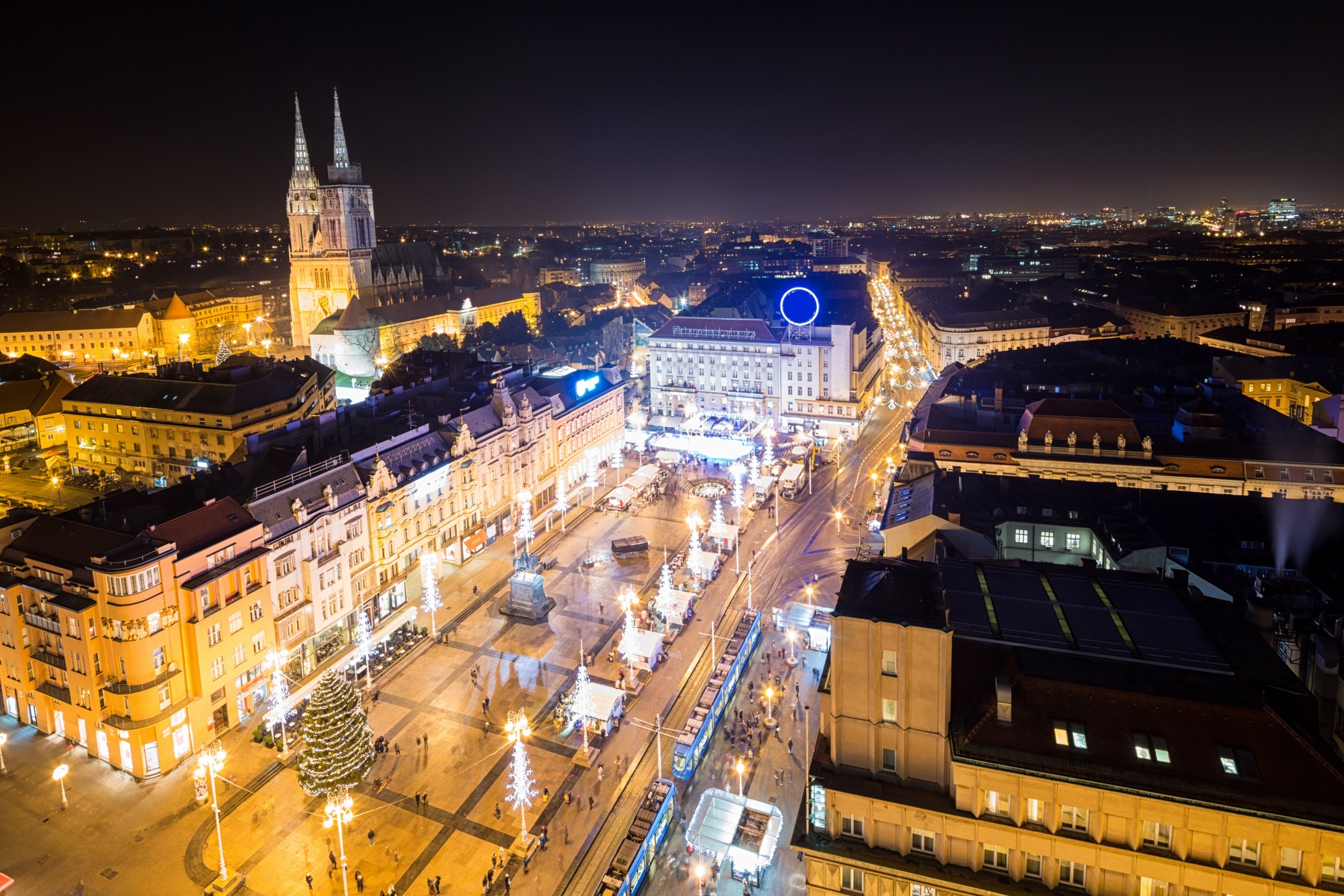 Over the past decade, Croatia has become one of Europe’s top tourist destination, so it should come as no surprise that its capital – Zagreb – was voted “Best Christmas European Christmas Market” for the third year in a row by European Best Destinations’ online poll.

Located in the northwest of the country, Zagreb is the largest city in Croatia and maintains its ancient charm with cobblestone streets and gaslight lamps. The city is divided into three parts: Upper Town – home of the Presidential Palace and Saint Mark’s Church,  as well as numerous museums and galleries, Lower Town – filled with shops and cafes, and Novi Zagreb – the more modern district lined with high rises. During the Christmas season, the city sparkles with lights and its markets feature numerous concerts and events throughout the city. Highlights include:

Ban Josip Jelačić Square The main square of Zagreb, located at the junction of upper and lower town, is the heart of the city and Christmas markets and looks as though it was plucked from a fairytale. A massive tree tower above the square, below which stand stalls of gastronomic delights, mulled wine, and artisan gifts. An open-air stage sits at one end where choirs singing Christmas carols. All around, white lights twinkle amongst frosted garland and evergreen trees.

Zrinjevac Park Two minutes away from the main square, Zrinjevac Park is a quintessential European Christmas market with its gaslight lanterns and small wooden stalls. Live music plays nightly (as well as weekend mornings). Don’t miss out on the baked štrukle at Zrinjevac Park, a warm, soft cheese pastry and favorite of the market.

European Square The most modern of Zagreb’s markets, European Square sits below the city’s cathedral, with concerts and DJs performing every night from 8 PM onwards. Less family-friendly than its surrounding markets, this market attracts a younger crowd, culminates Christmas Day and New Year’s Eve with an electronic music festival.

While not a traditional market, The Ice Park is the most famous skating rink in Zagreb and one of the top attractions during the Advent season. It rests between the Tomislav Square and the Art Pavilion and is a paradise of ice and lights; food and beverage stalls line the rink, and skating lessons are available for beginners.

Zagreb’s Christmas Markets come alive during the advent season, December 2nd – January 7th. Unfortunately, there are not any direct flights from the US to Zagreb’s Pleso airport, but connections can be found at major airports in Europe. Visitors often select connections through London or Paris. 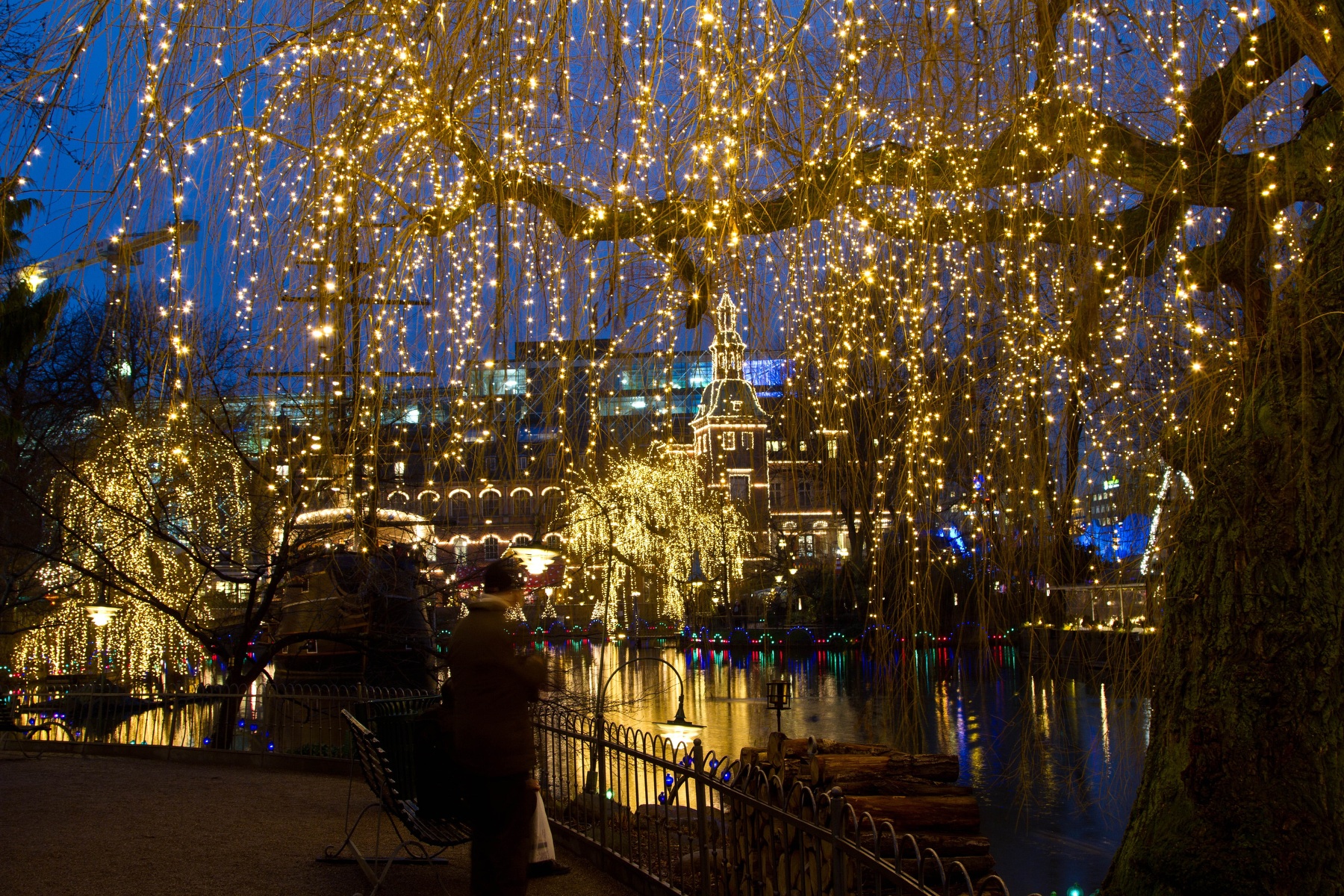 The capital of Denmark, Copenhagen is lauded one of the happiest places on earth according to the World Happiness Report, and this couldn’t be truer during Jul (Danish Christmas). White lights and holiday stalls decorate the Nordic city, offering glögg (Danish mulled wine served with raisins and nuts) and local cuisines such as æbleskiver (pancake puffs), Flæskesteg (pork roast with crackling skin), Smørrebrød (open faced sandwiches), and so much more.

The most famous Christmas market in Copenhagen lies inside the walls of Tivoli Gardens – one of the world’s oldest amusement parks and pleasure gardens. The garden is hedged with Christmas trees and illuminated by tens of thousands of lights of all colors which span four miles through the park. Little stalls – reminiscent of an alpine village – line the walkways, selling everything from handknit scarves to carved wooden toys. An ice-skating rink sits at one end of the park, with a variety of rides at the other: vintage roller coasters, reindeer-themed rides, and high flying swings. The Star Flyer – a local favorite – rises above the park, offering brilliant views of the city lights at night. The Garden also boasts its own concert hall, where you can take in the magic of The Nutcracker (whose set and costumes were designed by Her Majesty Queen Margrethe II of Denmark). Unlike some of the other Markets, Tivoli stays open until Near Year’s Eve and offers several firework shows between Christmas Day and New Year’s Eve.

Situated in the northwest corner of Germany, Cologne is home to seven different markets, each offering its own themed mug for glühwein (German mulled wine), cider, or hot chocolate to keep visitors warm as they peruse the stalls for gifts and local delicacies. Keep well fed with bratwurst, spätzle, and reibekuchen (fried potato cakes) – just a few of the dishes the markets offer.

The Cathedral Market sits at the base of Cologne’s 600-year-old gothic cathedral and is the largest market, boasting over 160 red-roofed stalls selling traditional crafts, ornaments, and toys as well as every local fare imaginable. The tallest Christmas tree in Rhineland towers in the center of the market, next to which sits a stage for holiday performances. Thousands of white lights stretch overheads, making you feel as though you truly are in a winter wonderland.

Located in the heart of old town, The Heinzelmannchen Market is just a short stroll away from the cathedral and said to be a favorite amongst locals due to its fairytale-esque charm. Dozens of Heinzelmannchen – little gnome-like creatures – adorn the roofs of the market stalls, playfully watching the crowds, and garland and twinkling lights stretch overhead alone the roofs and between the alleyways. As legend has it, Heinzelmannchen used to visit homes at night and perform all of the housework for the people of Cologne until, one day, they were frightened away by a curious local who set up a trap to catch them in the act. The markets boast several lodge-themed bars, an ice skating rink and a few lanes for the game of ice stock curling.

The Angel’s Market is Cologne’s oldest Christmas market and lies in the heart of the city. White chalets adorned with angel figurines and greenery line the streets of the market selling gifts and snacks. White stars and lights shine overhead, and angels dressed in white and sprinkled with gold glitter charm their way through the alleyways, spreading “Christmas cheer” in the form of gold glitter to those in need. Once a week, Santa rides through the market atop a white horse with gold, glittering hoofs.

The Harbor Market is next to the Chocolate Museum and stretches alongside the Rhine River, offering maritime merriment with its seafood cuisine (unique to this market) and crustacean ornament offerings. Market stalls of white pagoda tents and wooden floors line the streets, making one feel as though they’re in the middle of a regatta. At the heart of the market sits a three-mast sailboat serving hot beverages out of its hull.

The Rudolfplatz Market – also known as The Village of Saint Nicholas – is in the center of Cologne and extends back from Hahentorburg, one of the city’s medieval gatehouses. This enchanting market features white, half-timbered houses adorned with greenery and thousands of twinkling lights. It is also home to The House of St. Nicholas, the Village Chapel, and a massive Advent Calendar. It is said by locals to have the best Reibekuchen. The market caters more to children than the others, with kid-friendly entertainment on its main stage and art classes.

In Cologne’s Belgian Quarter is The Stadgarten Market, one of the newer and smaller markets. It is a bit farther out than the other markets, drawing smaller crowds and making it more of a local’s haunt. Set amongst the enveloping chestnut trees of Stadtgarten Park, wooden huts – with hundreds of white lights strung overhead – feature more modern crafts than the other markets, with the vendors changing weekly.

The Cologne markets open in late November (the last Monday before Advent) and close just before Christmas. Cologne has a small international airport and is just a short train ride away from Dusseldorf’s larger International Airport.