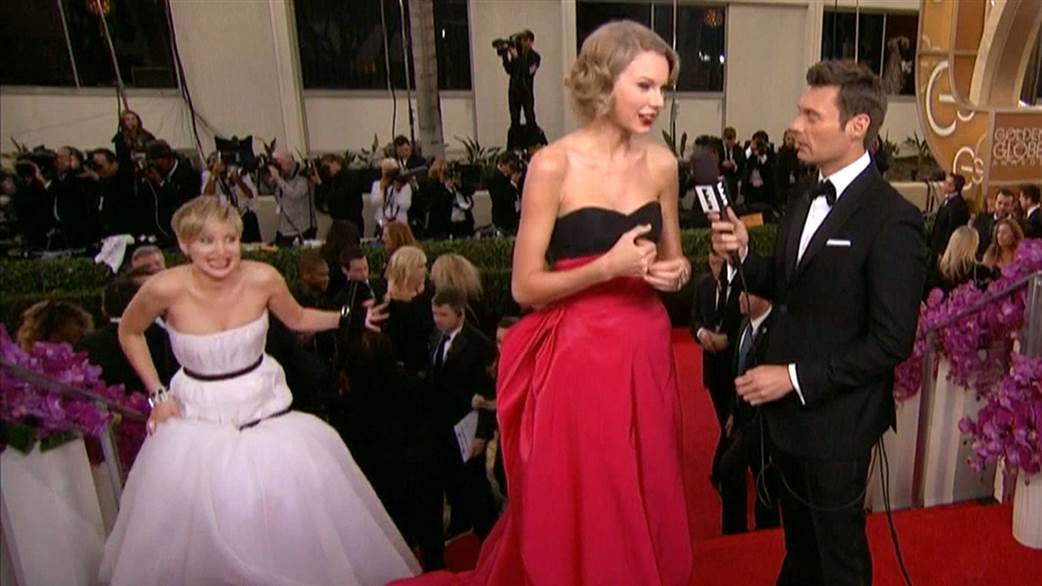 Let’s face it: Ruining pictures is naturally fun, and some of these funny celebrity photobombs will make you laugh until your cheeks ache.

Randomly jumping into the frame for a picture you aren’t meant to be in, or photobombing, has become a downright phenomenon over the last few years. Thanks to the unbelievable amount of pictures being taken and shared via the internet, the practice of photobombing has spread like wildfire, and evidence of it can be seen all over the world wide web.

Here are the best celebrity photobombs that will make you chuckle:

Heidi Klum is one of the best supermodels out there. Rudd doesn’t care because he tip-toed behind her to pose like a model.

They both look amazing.

In 2013, Iggy Azalea was caught photobombing eating a few chips in the back of these musical superstars!

The model turned actress made a weird face behind Sienna Miller in 2013.

She is still beautiful!

On the outside, it looks like Kim Kardashian and Kanye West are this superstar couple. Whether it be on a reality show or in celebrity gossip, they seem to be picture perfect at all times.

Well, in this celebrity photobomb, Kanye and Kim look like a NORMAL FAMILY with their first born, North. They look like they are eating out together and they were accidentally snapped by an Instagrammer.

Imagine jumping behind U2, one of the greatest band of all time, and making a funny face.

Cumberbatch was brave enough to do this.

It looks like Jack Black is trying to hide from Angelina Jolie.

Is he hiding or is he just trying to be funny?

Bill Murray is known for being the funny guy. He has a dry sense of humor that everyone seems to laugh at. Well in 2014, Bill Murray decided to sneak up behind Selena Gomez when she was taking a picture.

His face his priceless! And the younger singer doesn’t even notice. How funny!

It’s scary and Katy Perry doesn’t see it yet. Wait until she does!

Adele was showing off her cute attitude when she decided to photobomb a fan’s selfie.

We think the super fan was so excited when she saw Adele casually smiling in the background! Aw!

He is the Prince of Celebrity Photobombs.

Prince Harry has an impressive list of funny photobombs, and this photobomb at the New Zealand Commonwealth Games in Glasgow is one of our favorite celebrity photobombs by the royal prince.

Earlier this year at the Grammy awards, Susan Monaghan got the shock of her life when she bumped into Beyonce in the hallway.

And her expression is our expression when we get lucky enough to bump into Beyonce (in our dreams).

This is one of the celebrity photobombs that shows you how to deal with a rival. Singer Ed Sheeran is seen here jumping into a picture of ex-Norwich players Grant Holt and Adam Drury with a fan.

Ed Sheeran is an Ipswich fan, by the way, and the picture was taken on a match day between Ipswich and Norway.

It isn’t easy being green. It also isn’t easy to upstage Lady Gaga. But Mr. Kermit the Frog has got a pretty solid handle on both. Yes, he’s a felt puppet, but he’s got his own star on the Hollywood Walk of Fame, so we’re going to count this as a celebrity photobomb. Don’t @ us.

During a red carpet gathering for the MTV Video Music Awards, Kermit managed to pull off the impossible and steal the limelight from Lady Gaga in a drive-by photobombing! Hanging out the window of his limo with his mouth agape, the notorious swine-lover was likely less than thrilled to see Gaga’s choice of footwear: boots made entirely of ham.

If you ever had any doubts about the acting versatility of Daniel Craig, this picture should pretty much squash those. One would assume that a man who plays the most dashing, debonair, confident and overall friggin’ awesome characters to grace the silver screen is pretty much always that cool.

At least until this Taylor Swift selfie featuring an odd, mustachioed man in the background emerged. Yup, it’s none other than Daniel Craig, who has transformed himself into one of the creepiest creeps to ever creep. The man’s a chameleon.

As if the world doesn’t already love Michael Cera enough for his supremely uncomfortable contributions to Arrested Development, now he’s solidified himself among the greatest celebrity photobombers of all time.

The soft-spoken actor has popped up in several famous photobombs, begging the question of whether he’s doing it on purpose or if he is actually awkward at a George Michael Bluth level and just accidentally wandering into people’s pictures. In any case, look out behind you! There’s a good chance Michael Cera is there.

The former American Idol makes this list for the sheer enthusiasm she shows while photobombing Ellen DeGeneres and Portia de Rossi at the Grammys. Sure, Kelly is a world-famous singer with a successful career of her own, but that doesn’t mean she can’t go all “super-fan” in the background of a photo of other celebrities.

Kelly looks like the girl who begged and begged until her record producer cousin finally agreed to let her come to the Grammys if she promised to be cool, then she promptly made him regret it wholeheartedly.

The Queen of England is known for always looking miserable. She is seen looking grumpy at weddings, traditional royal events, and even meeting other state head’s.

Well, it looks like the Queen was feeling a little goofy when she photobombed two Australian hockey teammates when they were taking a selfie. We hope she did this on purpose!

The genius comic actor from films like Shawn of the Dead and Hot Fuzz pulled off the best celebrity photobomb to date by straight-up owning Tom Cruise. During the red carpet premiere of Mission Impossible 4: Ghost Protocol, Pegg saw that once again the film’s leading man was getting all the attention.

Why should Tom Cruise enjoy a photoshoot with two of his beautiful co-stars on his arm while Simon is left in the lurch? He shouldn’t. So Simon did what any good bomber would: He jumped directly in front of Cruise and stole the spotlight.

When George W. Bush is speaking, the Terminator looks disgusted.

The former president must have said something Schwarzenegger did not like.

Their conversation seems to have annoyed Hugh Laurie.

It looks boring and he wants to run far away!

It looks like Johnny Depp is playing hide and seek with Tim Burton.

Tim Burton seems to not realize what is going on.

If you doubted if the controversial Bill had a sense of humor, here is confirmation.

The former president photobombed Kelly Clarkson at a presidential inauguration in 2013 during the performance of the song “America.”

You can’t deny the fact that this photo falls into the category of funny celebrity photobombs.

The basketball star is photoboming Kanye West and Kris Jenner.

Their hectic lifestyle probably made them fall asleep in the middle of a party.

It’s probably one of the greatest celebrity photobombs of all time.

This happened at the Great Celebrity Ibiza Trip in 2014, where Diddy did a good job of photobombing Kanye West and Zac Efron. Meanwhile, in the background, there is Paris Hilton and Kim Kardashian.

This is one funny celebrity photobomb that the tourists in the picture will never forget.

In this picture, a group of tourists who were at the top of The Rock in Manhattan were told they were taking pictures for the commemoration for 30 Rock’s website, but they got the shock of their life when talk show host Jimmy and actress Cameron decided to “ruin” the photo.

Justin Timberlake and Casey Affleck were casually smiling and posing at the 2017 Academy Awards.

Then Damon thought it would be funny to make a funny face behind them!

The actor thought it was a good idea to photobomb Steven Spielberg, Jessica Seinfeld, and Jerry Seinfeld.

You can’t help but love this picture.

Breaking Bad Star Aaron Paul photobombing his co-star Bryan Cranston on Emmy nights was goals. His making one of his notoriously funny faces just before the picture was taken makes it a perfect photobomb.

Although he didn’t win anything on this day, Joseph Gordon-Levitt sure knows how to deliver a worthy photobomb.

This is not only one of the funniest celebrity photobombs, but it also deserves an award.

This married couple is adorable.

Timberlake wanted to prove that he can make some moves behind Jessica Biel.

The two stars of the Star Wars movie made everyone laugh on the red carpet.

Never seen the mischievous side of Jennifer Lawrence? Here it is.

What makes this picture cool is her expression and the fact that she was trying to creep on Taylor Swift.

This celebrity photobomb of Taylor Swift during an interview at the Golden Globes makes us wish we were friends with Jennifer Lawrence so she can creep on us anytime.

This photobomb got the internet in guffaws and will always remain in the celebrity photobombs hall of fame.

What makes this hilarious was the fact that Donald Trump had no clue what was happening. This happened after Donald Trump was a guest on Jimmy Fallon’s show and Tyler, The Creator performed.