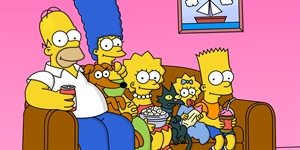 More than 500 episodes and a quarter century of Simpsons episodes have produced some real gems—and a few stinkers. From animated shorts that filled in the gaps on “The Tracey Ullman Show” to the longest running television show of all time, “The Simpsons” has gone from reflecting culture to creating it. When it first aired in 1989, animated shows were only for children, but over two decades later, animated shows are fully acceptable prime-time fare.

After visiting a petting zoo and seeing the cutest lamb in the world, Lisa decides to eschew eating meat. She’s ridiculed by her family, her classmates and even her teachers. She feels as if no one understands her plight until she meets Apu and his friend Paul McCartney, who are both vegetarians. This episode has some of the best Ralph Wiggum-isms in the entire series: “Oh boy, sleep! That’s where I’m a Viking!” And Homer’s disbelief that bacon, ham and pork chops all come from some “mysterious animal” is one of the better Homer-isms out there. This episode shows that deep issues can be treated with tact and humor, and has some of the best one-off moments in the show.

When Waylon Smithers turns down a job with Globex Corp., recruiters move to the next most senior employee, one Homer Simpson. When the family moves to Cypress Creek for Homer’s new job, at first everything seems fine. Homer’s new boss, Hank Scorpio, seems supportive and thoughtful—he knows where to get the best hammocks in town—and except for his plans for world domination, he’s a pretty nice guy. As a send-up of James Bond films, it shows what it might be like for one of the minions of the super villains. When Homer decides he needs to leave his dream job for the sake of his family, Scorpio sends him a gift—the Denver Broncos. The jokes don’t fly as fast and furious as some episodes, but the overall payoff is worth it.

In a biting commentary about capitalism, unions, corporate greed and dental plans, “Last Exit to Springfield” hilariously treads everyone while still getting laughs. With a great clip from McBain at the opening to set up the evil of Mr. Burns and references to Jimmy Hoffa’s mysterious disappearance, the story of the conflict between unions and corporations is skillfully played with neither side coming out smelling like roses. Lisa’s need for braces motivates Homer to stand up against Mr. Burns — once he thinks it through all the way. Maybe this will get Mr. Burns to finally remember who that worker from sector 7G is. While no one moment stands out, that makes the entire episode amazing for the continuous jokes and “The Big Book of British Smiles” as a way to punish children who don’t brush.

When Mr. Burns is caught stuffing toxic waste into a tree in the park, he’s ordered to pay a fine to the city. Despite Marge’s protestations to the contrary, the singing monorail salesman convinces the crowd to build a rapid transit system. But when things go wrong, they need help to stop it—help that only Leonard Nimoy can provide. With spoofs of “The Flintstones,” “Silence of the Lambs,” “The Music Man” and “Star Trek,” this episode is far better than an escalator to nowhere. With original music, guest stars, social critique and great sight gags, the episode is as iconic as it is funny.

Starting off with McBain’s short-lived late-night talk show mocking the Fox Network and moving to a threatening letter addressed to Bart, the Simpson family has to leave Springfield and assume a new identity. As the Thompsons—complete with new intro song—they are still stalked by Sideshow Bob. Luckily there are rakes aplenty and a Bob’s vanity to foil the plot. The parody of “Cape Fear” brings the voice of Kelsey Grammer back to the show in one of his best performances. And it reminds us that “no one who speaks German can be an evil man.” The jokes are fast and furious, but so is the thoughtfulness and attention to detail. This episode is the epitome of what has made “The Simpsons” excellent for decades.