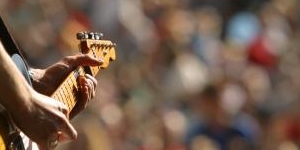 There are concerts—you pay a $100 a ticket, stand for three hours and then go home. Then there are music festivals. These are events. You gather up several days’ worth of food, pack a cooler and park yourself right near center stage for an entire weekend, if you choose to rough it that long. These festivals are some of the most well known events around, providing something for everyone.

If you want a family-friendly experience or something you can go to with the in-laws, the Newport Folk Festival in Rhode Island may be more your style. Previously offering soulful artists Jim James, Andrew Bird, Iris DeMent and the Avett Brothers, this folksy festival isn’t known to be a head-bopping, mud-soaked, drunken experience. The lineup is similar to something you’d get in the Bob Dylan era in the ’60s, but set in a modern-day New England retreat.

Seattle is the birthplace of grunge rock, so naturally, having a major music mayhem fest in the area is ideal. Sasquatch! Festival takes place just three hours outside Seattle in Quincy, Washington. This four-day event previously included Elvis Costello, the Lumineers, Primus, Mumford & Sons and the Arctic Monkeys. Don’t fret if you can’t get too close to the main stage. The venue has an enormous widescreen display, allowing you to sit far back from the crowds and still feel like you’re up front. As a bonus, the festival offers live standup comedy performers—one previous performer was Nick Offerman—here and there, in case you get bored of the live tunes.

Any festival that originates out of Miami is sure to be a spring break-like boozefest, but with live music of course. The Ultra Music Festival is jam packed with disc jockeys, hip-hop artists and music groups to make you dance the night away. Fatboy Slim, Afrojack, David Guetta, Kaskade and Calvin Harris have performed at this event in the past. Plus, if you didn’t get enough of the body-pumping grooves the first time around, the festival goes on again the following weekend with different acts.

Lollapalooza began as a small grunge fest, set up by Perry Farrell of Jane’s Addiction. Soundgarden and Pearl Jam were original headliners. As the event grew in popularity, so did the number of performers. Chicago’s Lollapalooza now hosts over 130 acts and growing—The Cure, Nine Inch Nails, the Killers, Phoenix and New Order are just a few of Lollapalooza’s faves. Don’t worry if you don’t have a sitter for the three-day event; bring your kids along. The festival includes daytime kid-friendly attractions such as comedy shows and clown classes in the Kidzapalooza zone.

Bonnaroo is like a modern-day Woodstock held right in America’s music capital: Tennessee. You get four days of live bands on multiple stages—Wu-Tang Clan, Paul McCartney, Tom Petty, Mumford & Sons, Bjork and Macklemore and Ryan Lewis are just a sampling of past performers. If you’re going to do Bonnaroo, do it in style. Rent yourself an RV, gather up your closest friends and camp out for the extended weekend. Of course you can rough it instead, and pitch a tent to relax in after a full day of sloshing around in the mud.
Must Read
Renewed or Canceled: The Status and Budget of Every TV Show
Entitled Neighbor Keeps Using Her Yard, She Gets Spectacular Payback
St. Patrick's Day Quiz