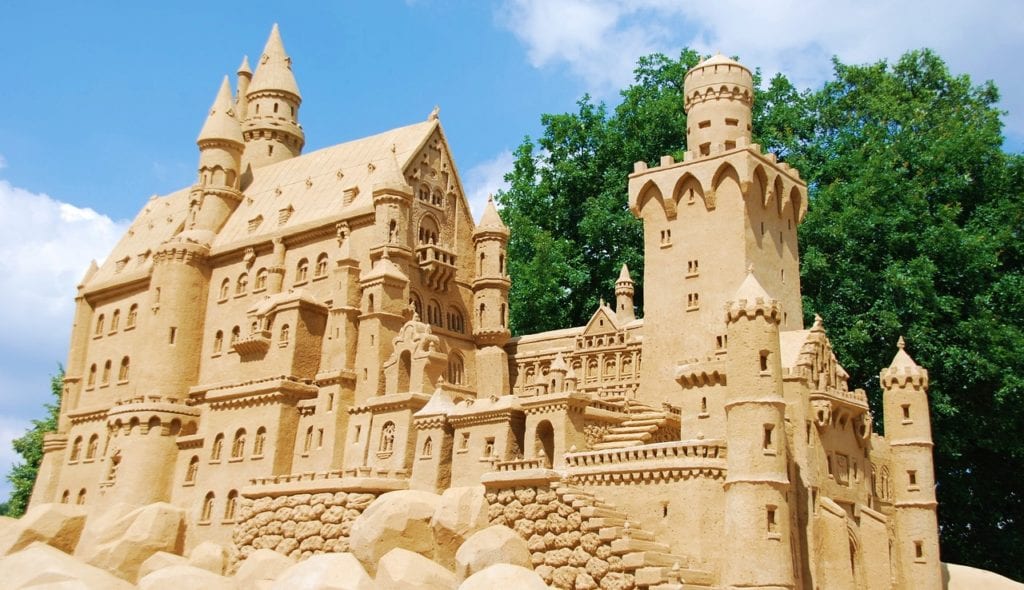 “And so castles made of sand fall in the sea eventually,” as Jimi Hendrix once sang. The sentiment might be an even more gut-wrenching experience. However, once you see these temporary temples. Meticulously crafted out of nothing, these monuments in miniature defy reason while igniting the imagination.

If you’ve got a sketch pad, a shoreline, a trowel, and some toothpicks, you have all the essentials to create your own perishable, pint-sized palace. Perhaps, you can make our next list of amazing sandcastle sculptures.

In the meantime, enjoy these fantastic sandcastles. 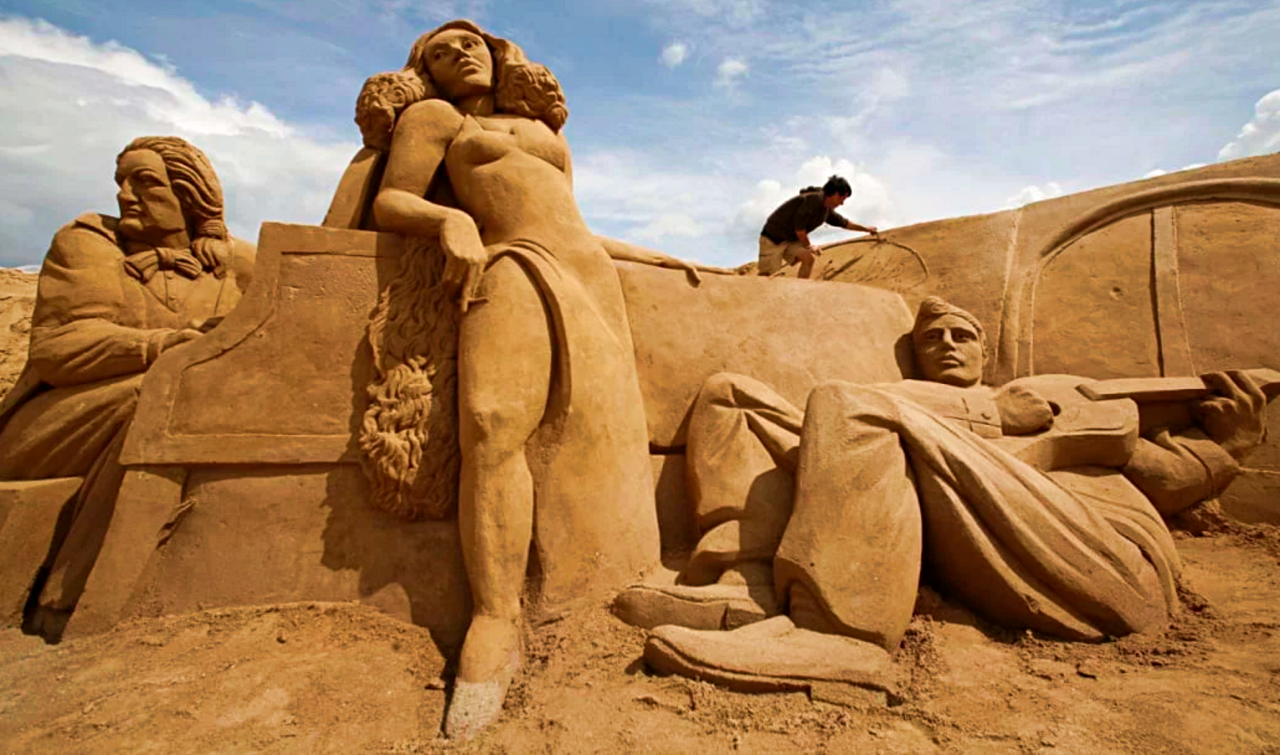 When you make a world of sand, you want it to be impressive. The Sand World structure certainly delivers. Developed by Seri Ramirez of Spain, the structure is musically inspired. Beethoven, Marlene Dietrich, and Elvis are all part of the stricture.

Made near Luebeck, Germany, in 2007, this took a lot of work to construct. It took 9,000 tons of specialized sand at the Baltic Sea Beach of Travemunde as well as 75 international artists to help form it. The concept of the theme of the structure was “time travel through the history of mankind.” 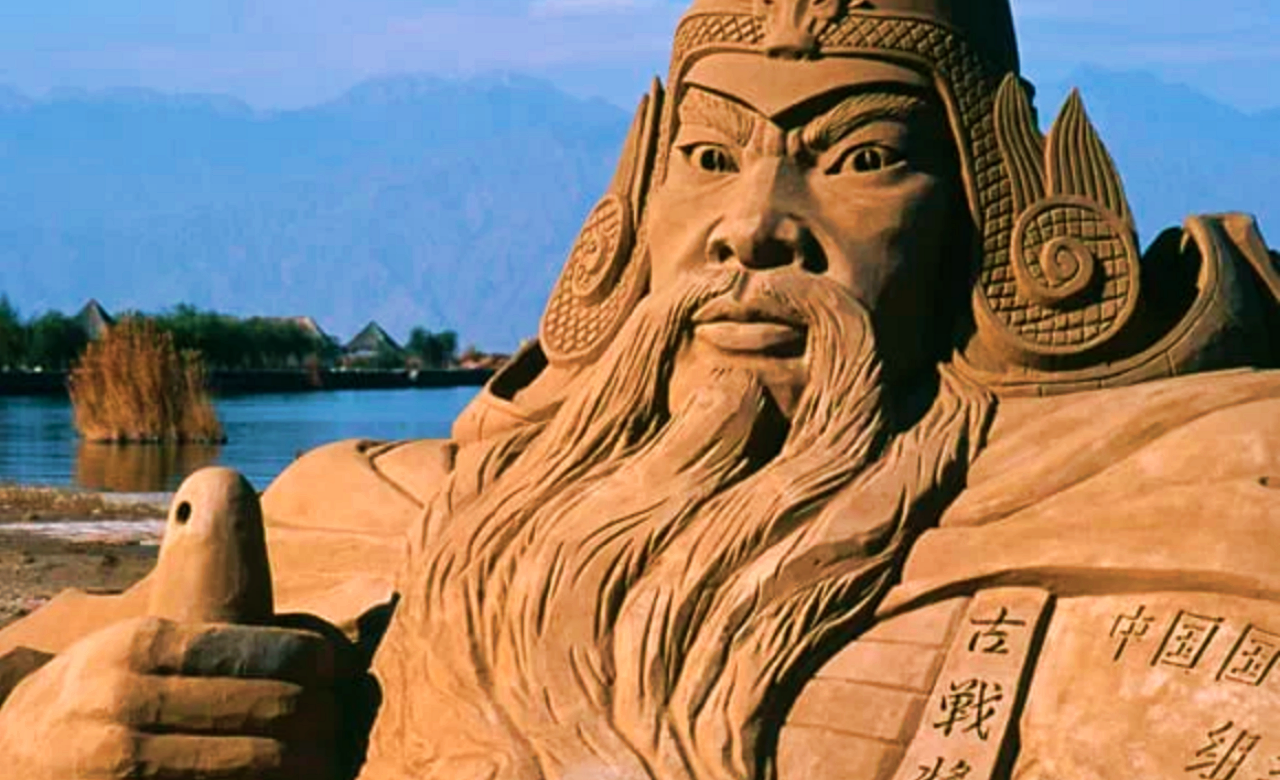 While it is true that this is less of a sandcastle and more of a sand portrait, it does count as a sandcastle due to the entire structure. As you can see, this sculpture features an amazingly detailed warrior.

However, other portions of the sand structure have steps and technical castle material. Therefore, it counts! Called the Ancient Warrior, this structure a fantastic for the Zhongwei International Sand Sculpture Competition. 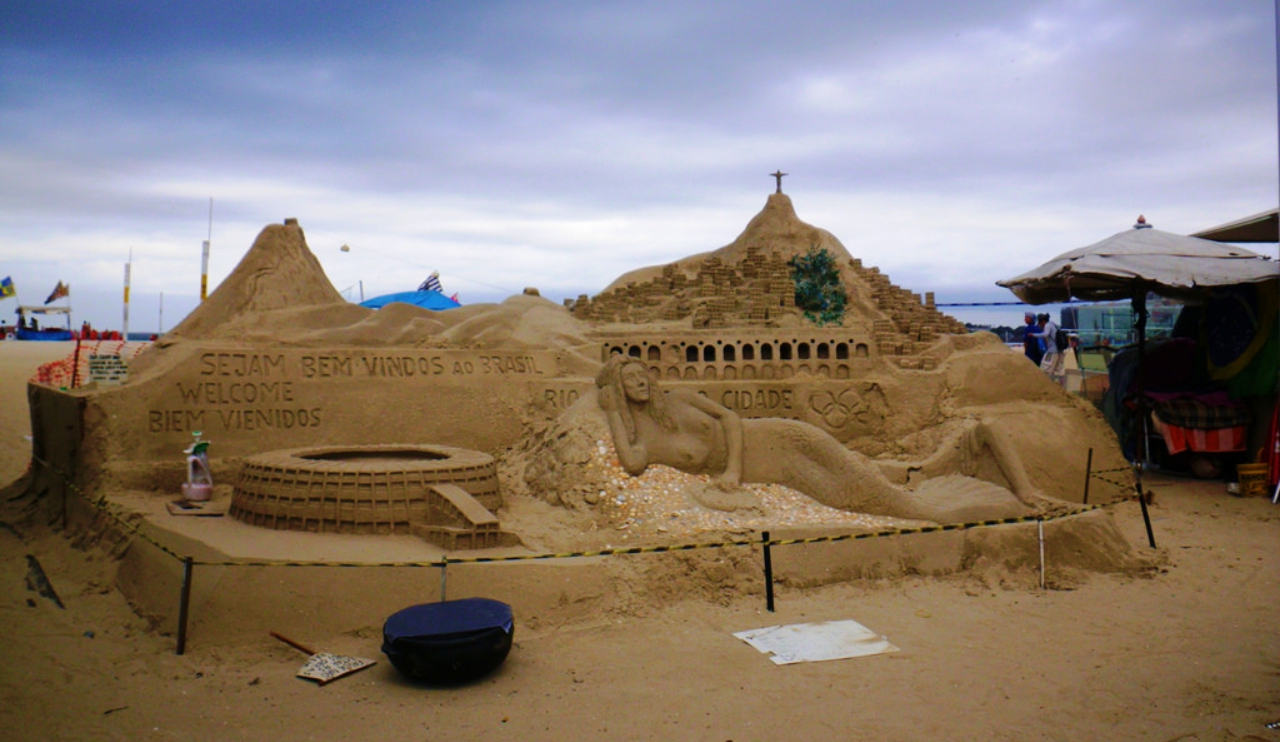 When you decide to go detailed in your sandcastle, we’re not going to be upset by it. The question for us is, did they have a model for this or did it come from the maker’s memory? 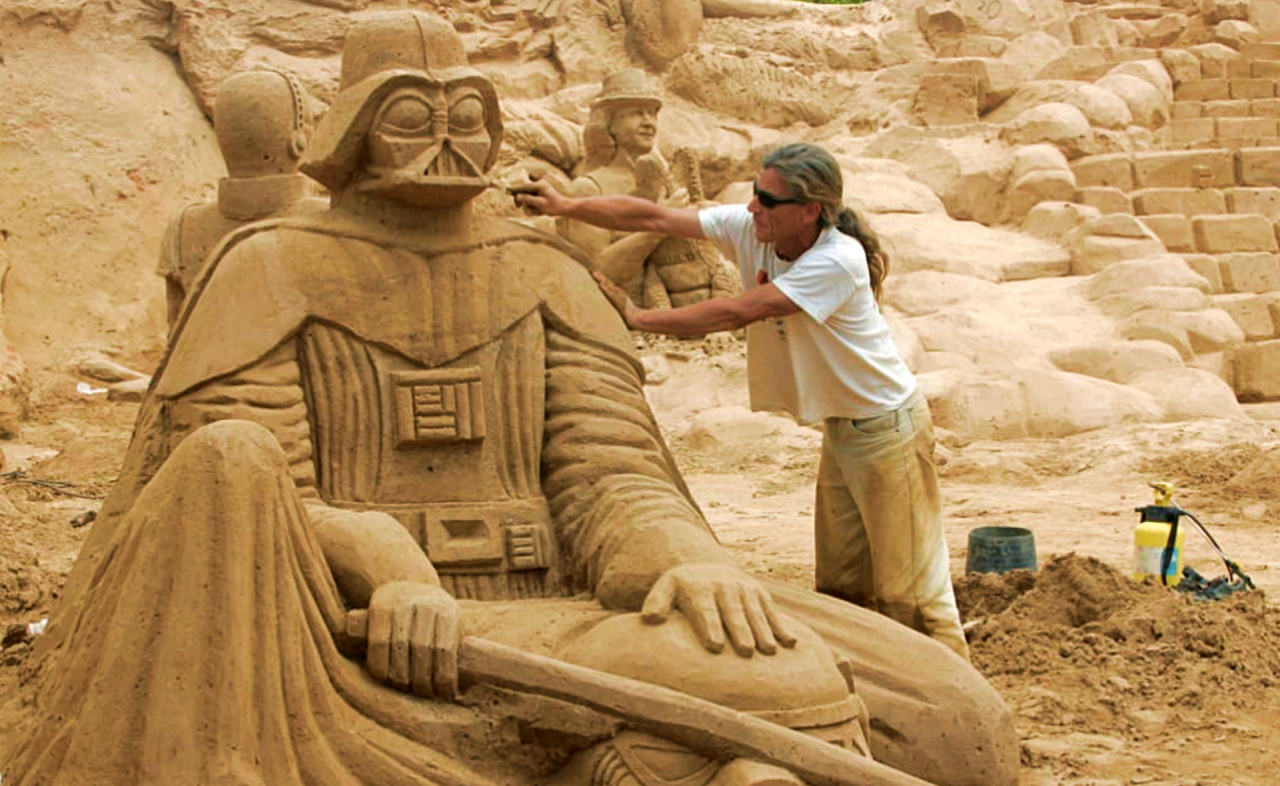 The force is strong in this sandcastle. Made at a sand park exhibition in Pera, Portugal, in 2008, this structure is inspired by Star Wars. However, it included several other Hollywood films and characters in the complete structure.

It took a little more than 60 sculptors to create this masterpiece. The final product certainly delivers, so we’re huge fans. 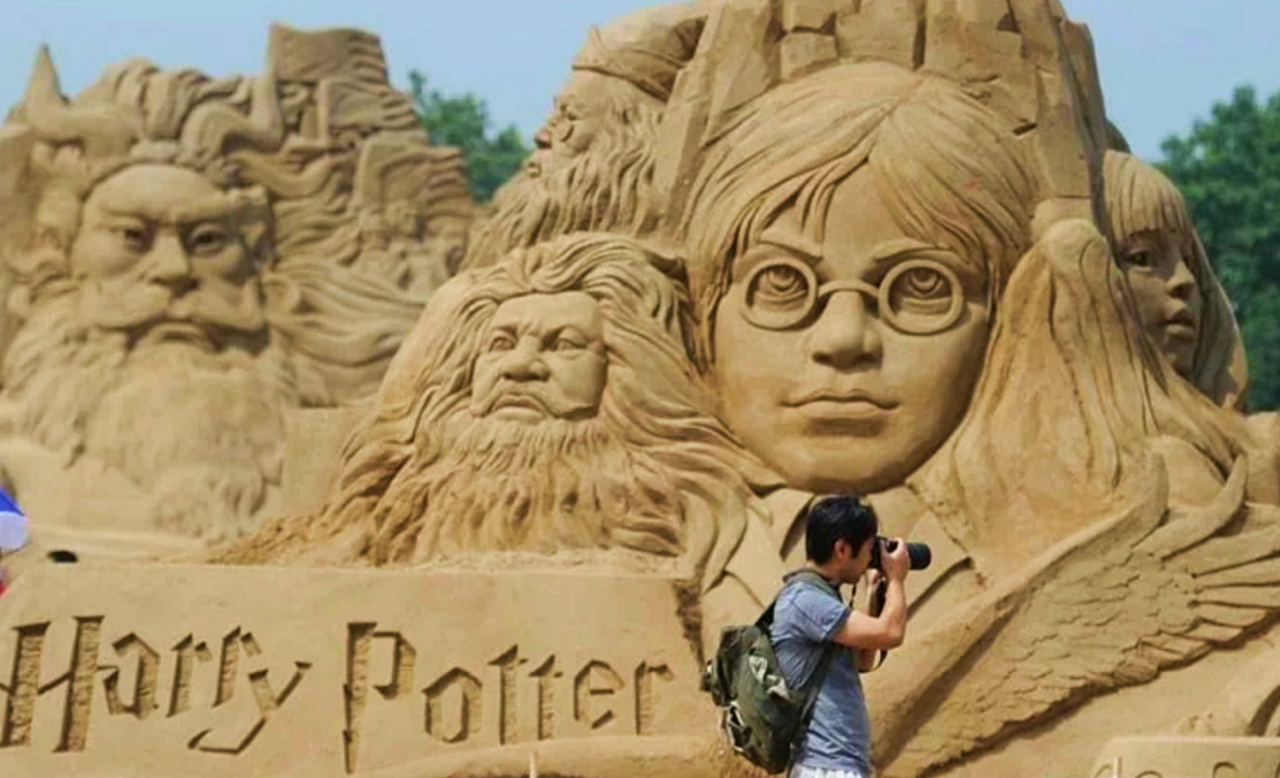 Everyone loves Harry Potter. Perhaps we’re not as big of fans as we thought because we surely did not make this amazing sandcastle.

Made for the Changsha Sand Art Festival in China, this Harry Potter inspired sandcastle won the competition in 2011. The overall festival displayed 60 works by other amazing sandcastle makers. If they’re anything like this, we need to head to next year’s competition! 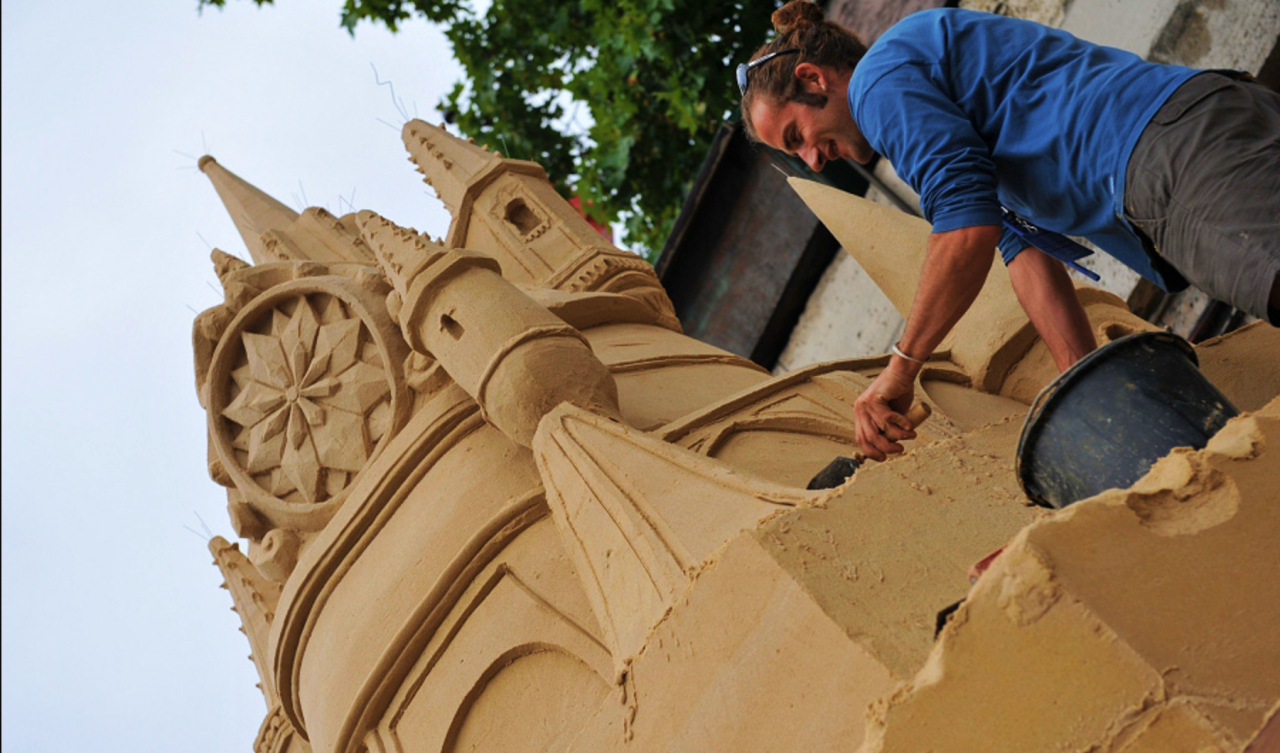 The goal of this sandcastle was to create the iconic Disney castle that is seen in the opening of every Disney movie. When making magical moments at Disneyland Paris, you want to live up to what people expect.

We feel they did an incredible job, and it seems like we’re about to see Tinkerbell fly by. Where is the music? What movie are we watching? The perfection of this castle makes us excited! 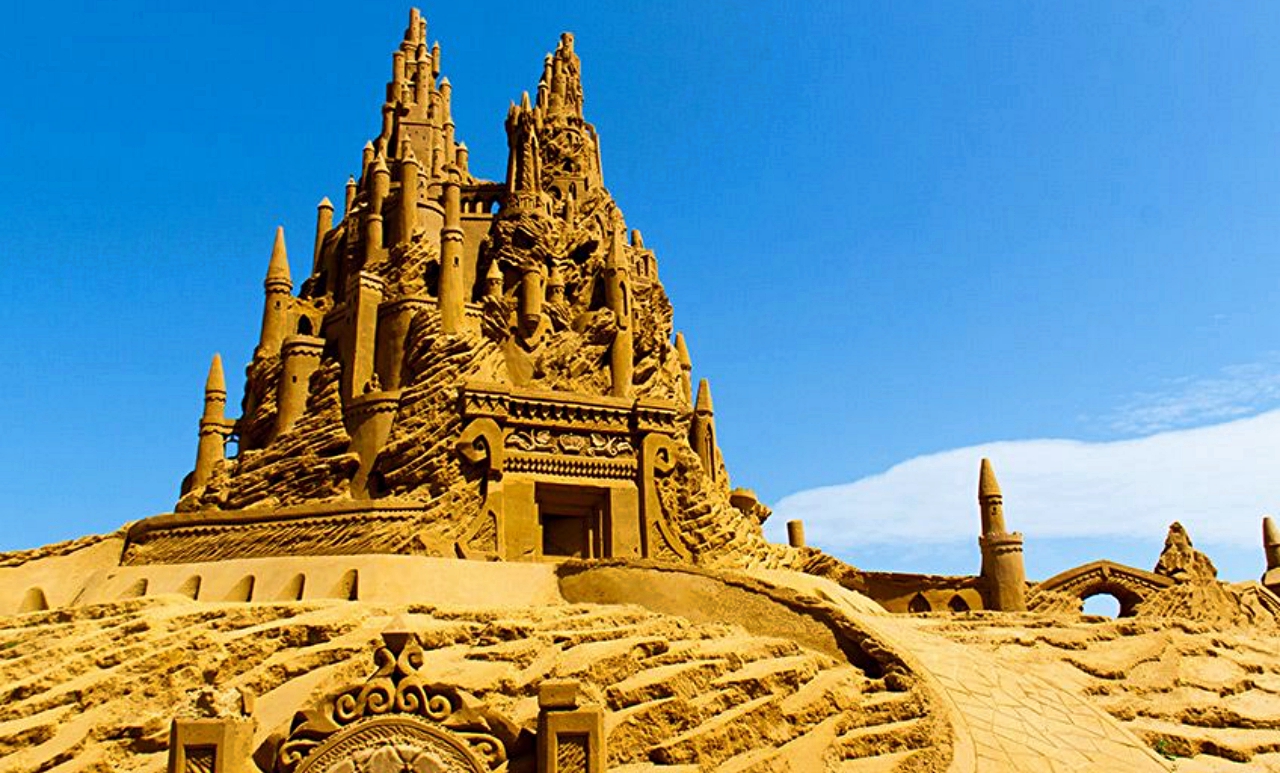 We’re not saying that this may be the framework for how all sandcastles should be made, but it wouldn’t hurt. The overall sandcastle looks tremendous and insanely detailed. It is located in West Flanders, Belgium, and certainly takes a cue from the former royals nearest them.

We love when people put their heart and soul into a good sandcastle. It’s never too much to ask in our opinion. Let’s hope it doesn’t get washed away too soon by the shore. 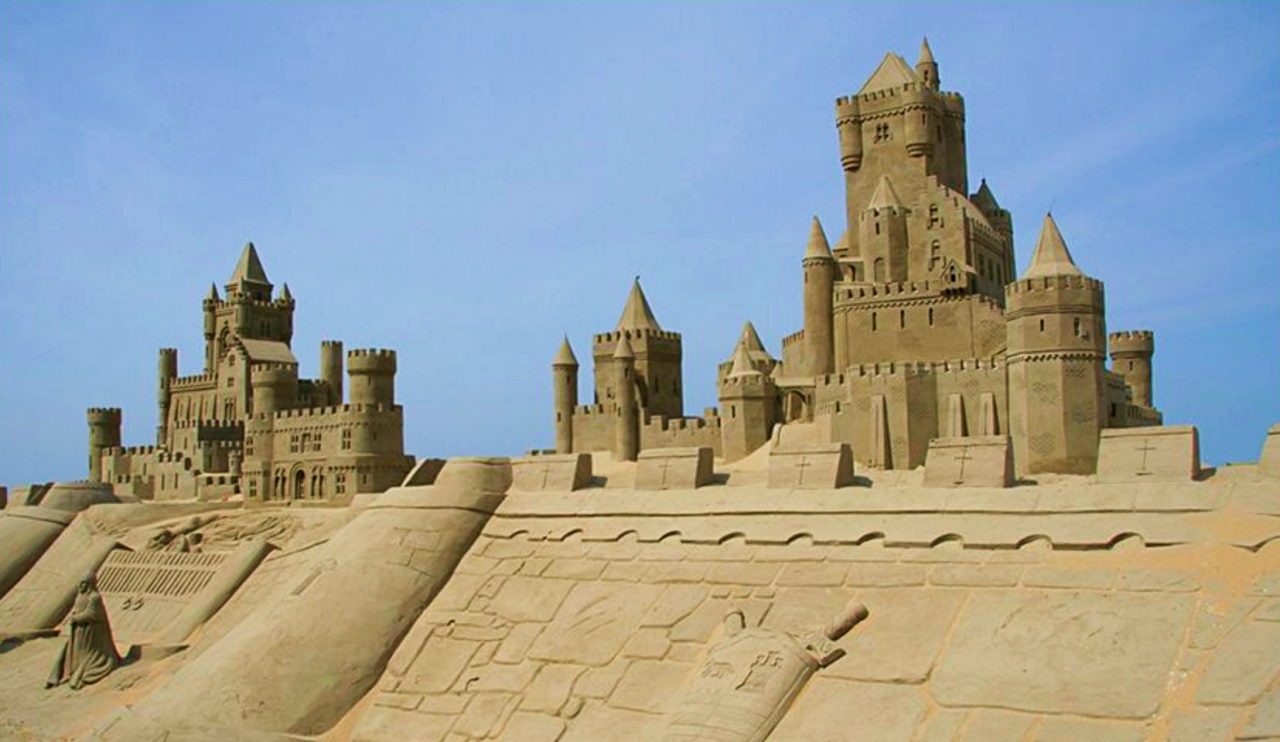 This sandcastle certainly looks like a real castle we might find in medieval times. While we’re pretty sure there isn’t a sand version of King Arthur here, there could be a royal family inside. Located in The Hague inside the Netherlands, it’s the perfect example of what a sandcastle needs to be.

Either way, it is one heck of a sandcastle worthy of merit. 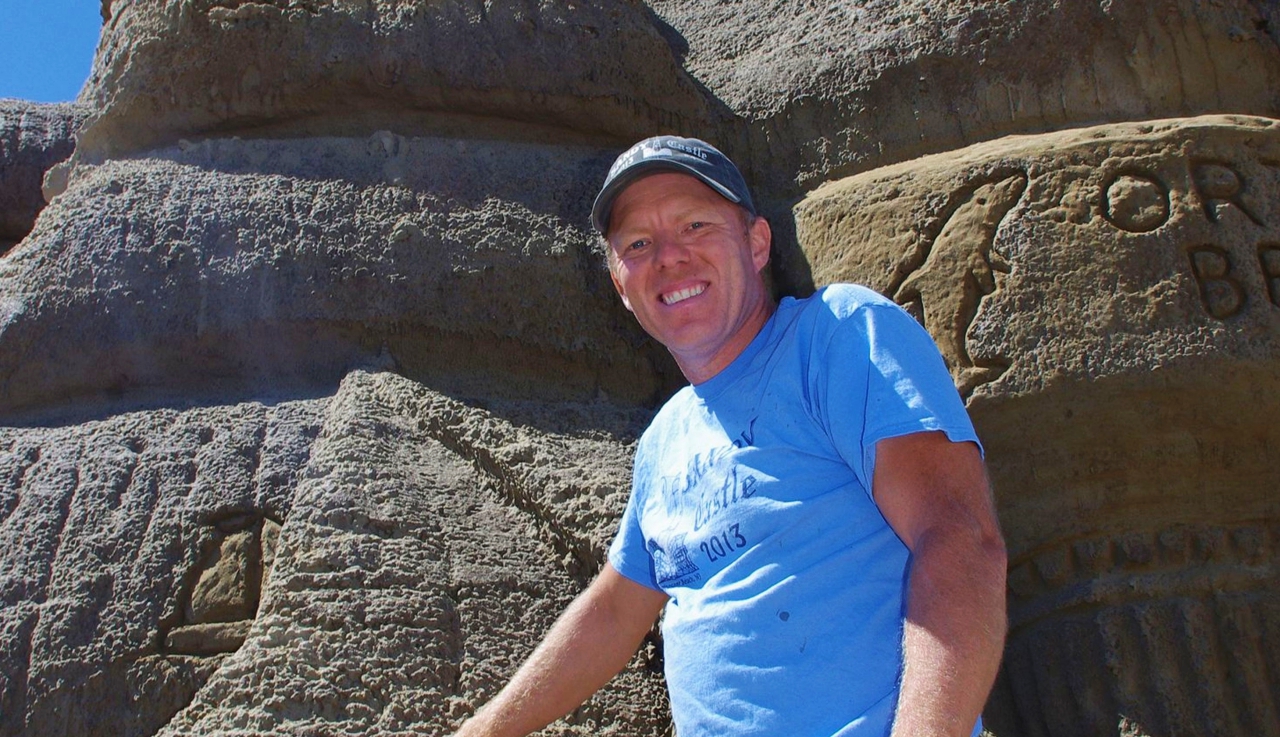 Ed Jarrett (pictured above) decided to try and make history by building the tallest sandcastle in the world. He accomplished this dream in 2003, and then he broke his record in 2007. He broke it again a few years later with a 37-foot, 10-inch sandcastle in Connecticut.

This sandcastle took 1,500 volunteers to construct and 1.6 million pounds of sand. It took them around 2 months to finish it. The sad part is that a storm was coming and they had to make sure to get the sandcastle certified. Sandcastles do not last in major storms, especially near oceans. The image plus a professional certifier saw it, and now this remains the tallest sandcastle ever. 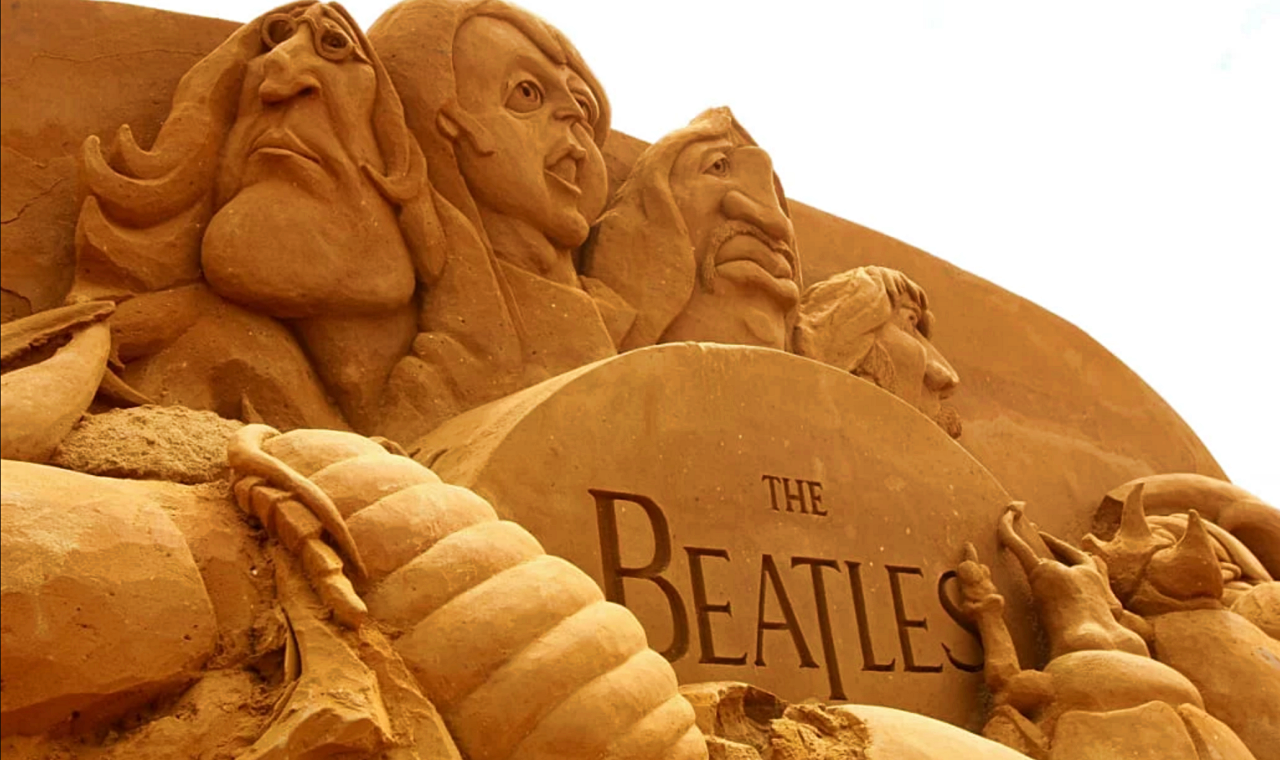 Who could ever not love Beatlemania? Carved out by an American named Brad Goll and a Canadian named Karen Fralich, this sandcastle won a competition. It is called the Creepy Crawlies Sandsculpting Exhibition, and it was held on the Frankston waterfront in Melbourne, Australia.

The two won in 2010, and it took a lot of assistance by more than just Fralich and Goll to construct. We’re impressed. 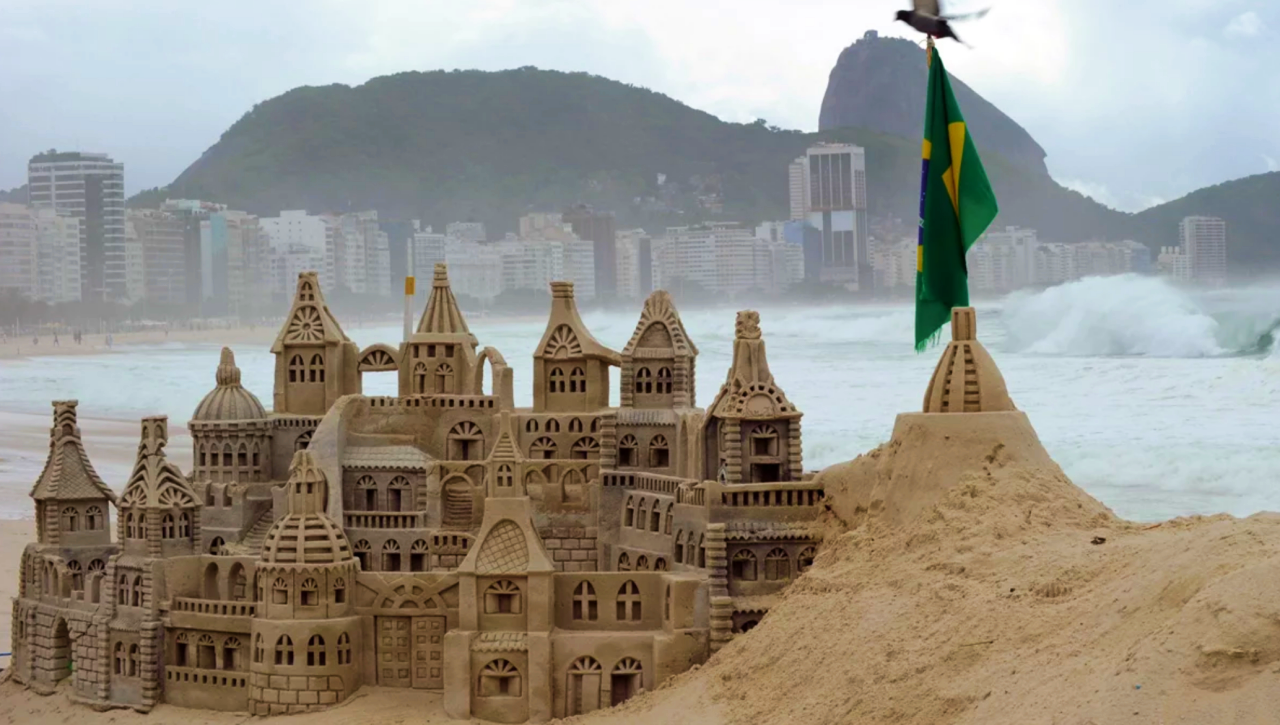 We’re tempted to sing the Copacabana song when writing about this amazing sandcastle. It was constructed on April 9, 2010. Overall, it is one of the most detailed we’ve ever seen.

The reason for its name isn’t because the makers wanted to honor a memorable song. The sandcastle was made in Rio de Janeiro on the Copacabana Beach. Hence, the Copacabana Sandcastle. 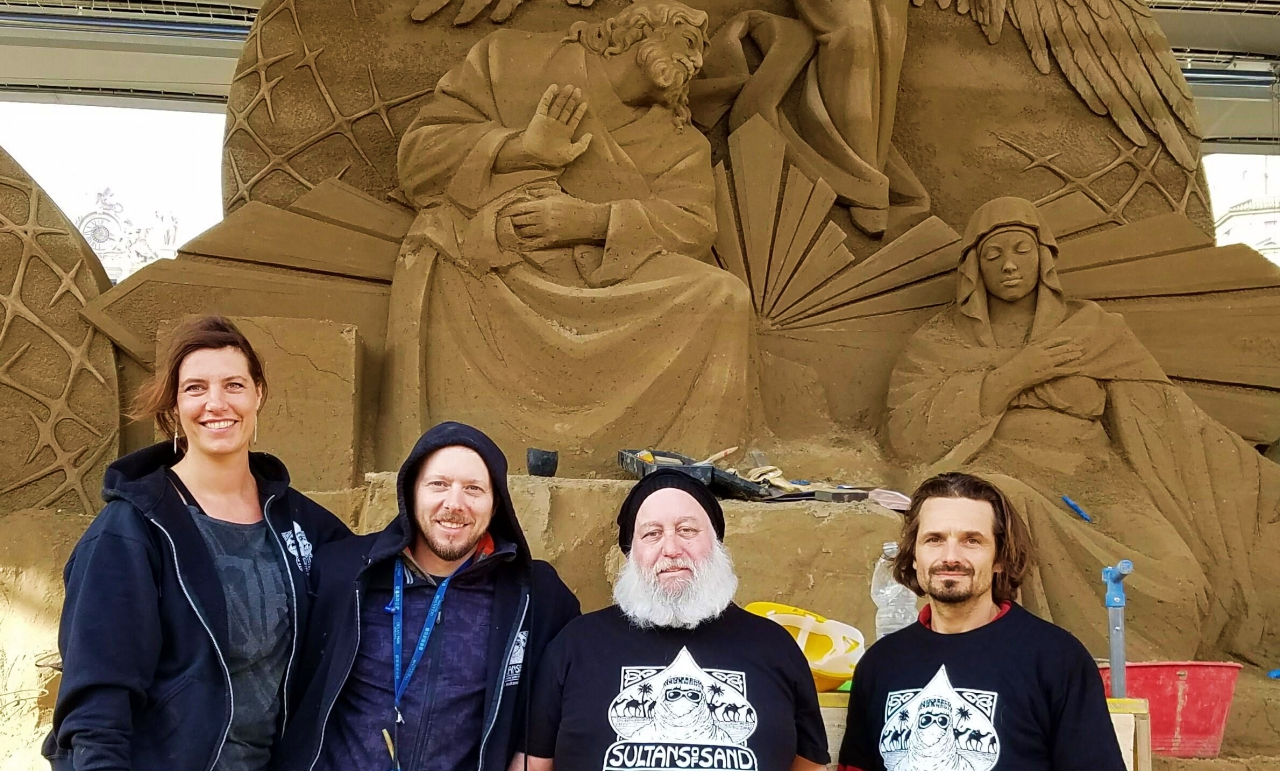 Dreams certainly do come true. We can ask Rich Varano about that one. A fan of fantasy, he wanted to make something that would work within that genre.

He did just. The American sand sculptor crafted what we can only describe as a Dreamy Sandcastle. 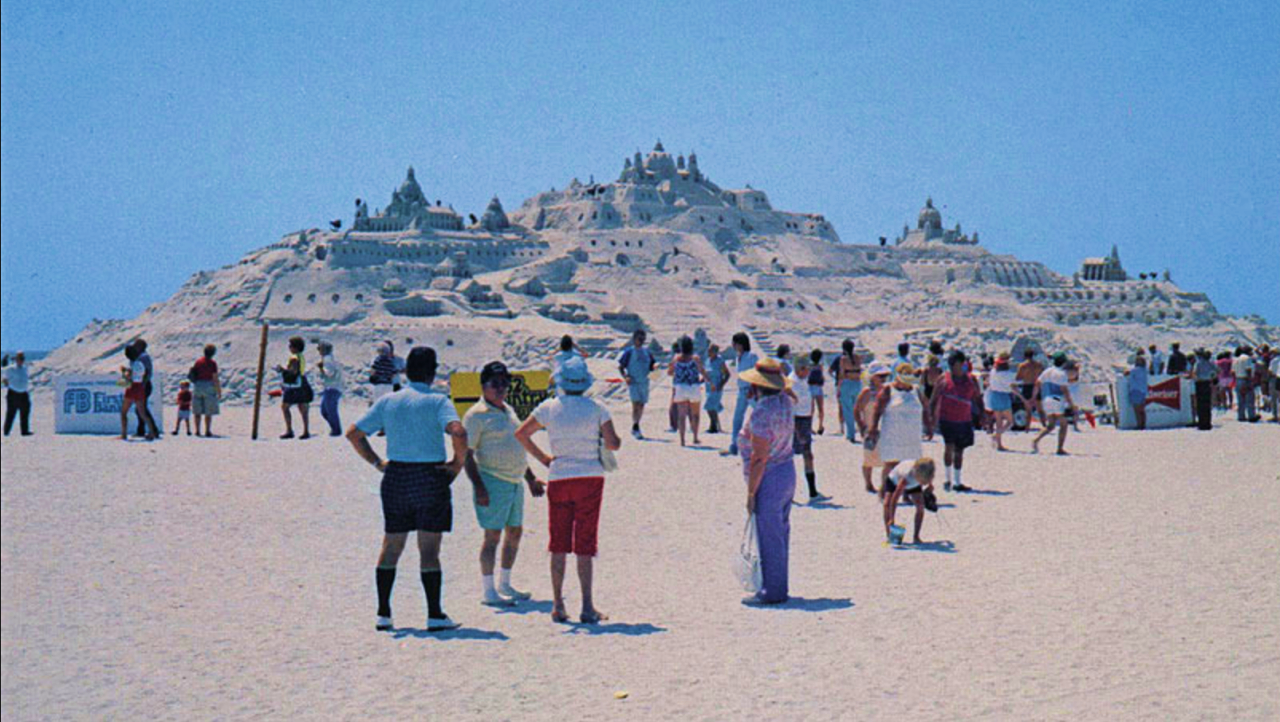 Formerly the biggest sand sculpture in the world, the Atlantis inspired sandcastle was made to be as elaborate as humanly possible. Unlike other sandcastles, the sculptors knew that they had to make a large base for everything to hold up.

The base allowed them to continue stacking and making more castle. It got larger and larger until one day they made it as big as they could. Then the Guinness Book of World Records called it the largest in history. While it was the tallest at one point too, this record no longer stands. Either way, what an amazing sandcastle, right? 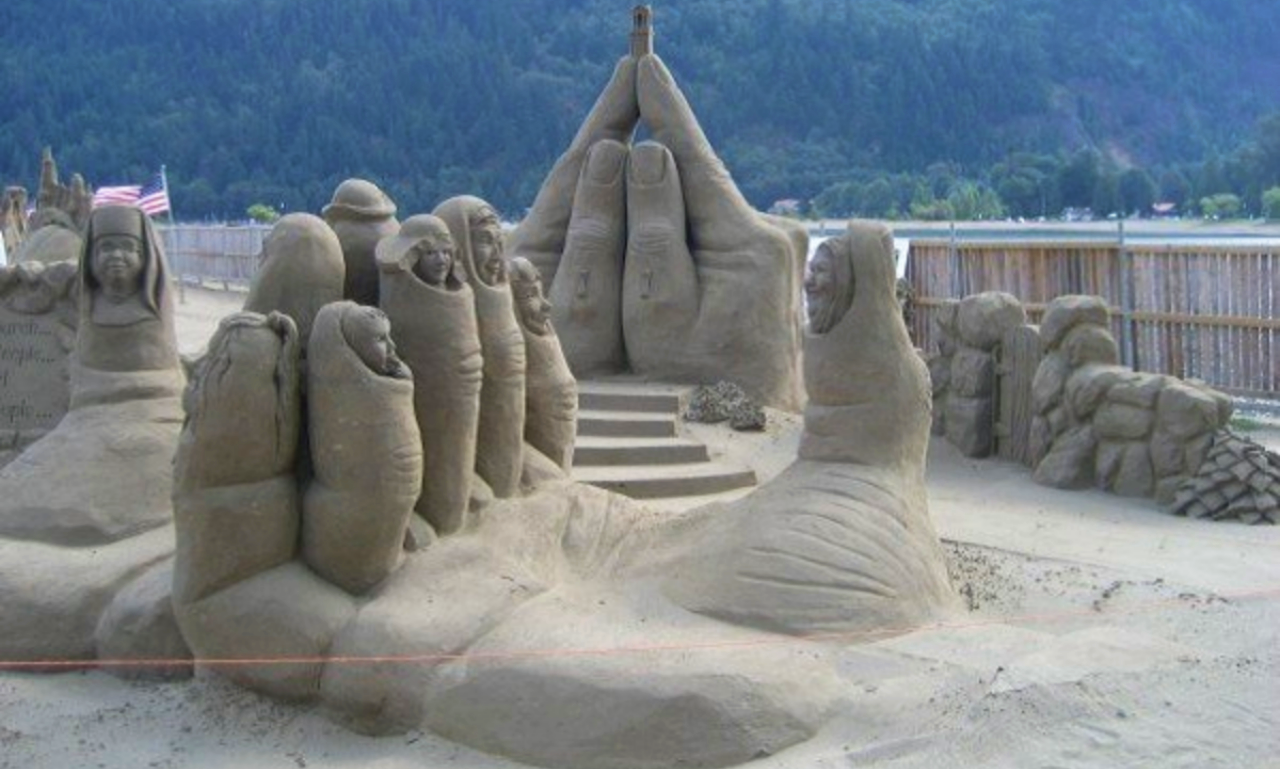 Located in the Fraser Valley on the shores of Harrison Lake, you can find The Church. It is an amazing sandcastle that puts other sandcastles to shame. The sad part is that it came in second, winning the silver medal at the World Championships of Sand Sculpture in 2007.

It is heavily detailed with impressive looking hands and fingers that made us believe a real hand was coming out of the sand. We’re not even sure it’s sand there. It might be real hands! 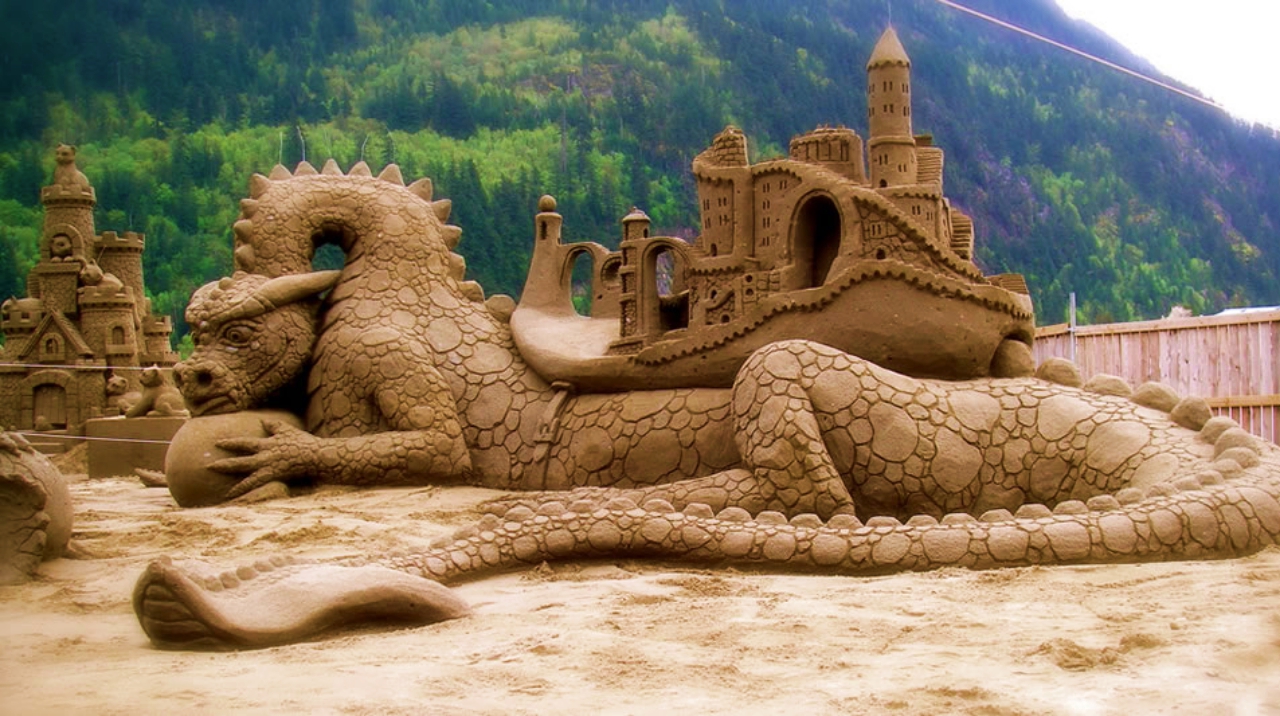 How could anyone ever hate something so impressive? Imagine you’re creating a castle. Don’t you need a dragon there to guard you and your queen or king? While we won’t lock the Princess in a Tower for the dragon to keep an eye on, we will want one present.

Sand sculptors Walter McDonald and William Lloyd did just that and made an impressive sandcastle with an even more amazing guard dragon on the outside. Truly, the people of this sandcastle area are dwelling among the dragons.

Click next to read about strange things that washed up on the beach. 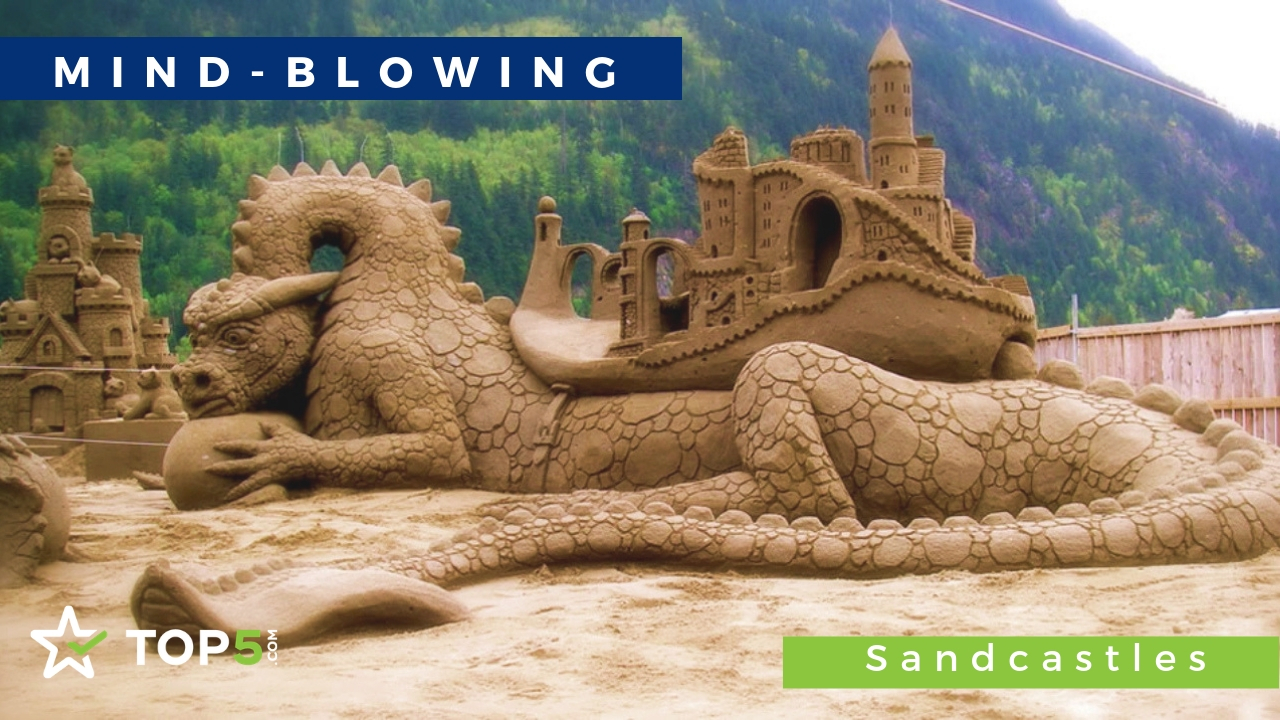 The Top 18 Strangest Things Found Washed Up on the Beach 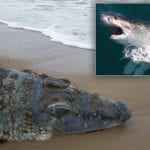 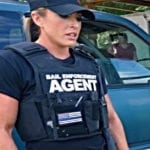 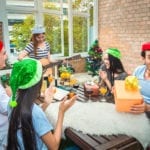 Teacher Refuses To Let Girl Eat ‘Poor’ Lunch, Mom Steps In
Top 5 Raunchy Christmas Party Games That Will Make Your Family Cringe
Two Guys Noticed These Pipes Sticking Out Of Ground. They Never Expected This To Be Underneath
Mom Adopted Two Children, Months Later She Learned Who They Really Are
Mom Gets Strange Feeling About Son-In-Law So She Decides To Check Old Holiday Photos
Couple Bewildered After Opening Wedding Gift Years Later
Passenger Hears Soldiers Talk Then Reaches Into His Jacket
Wife Asks For Divorce, Judge Throws It Out Of Court