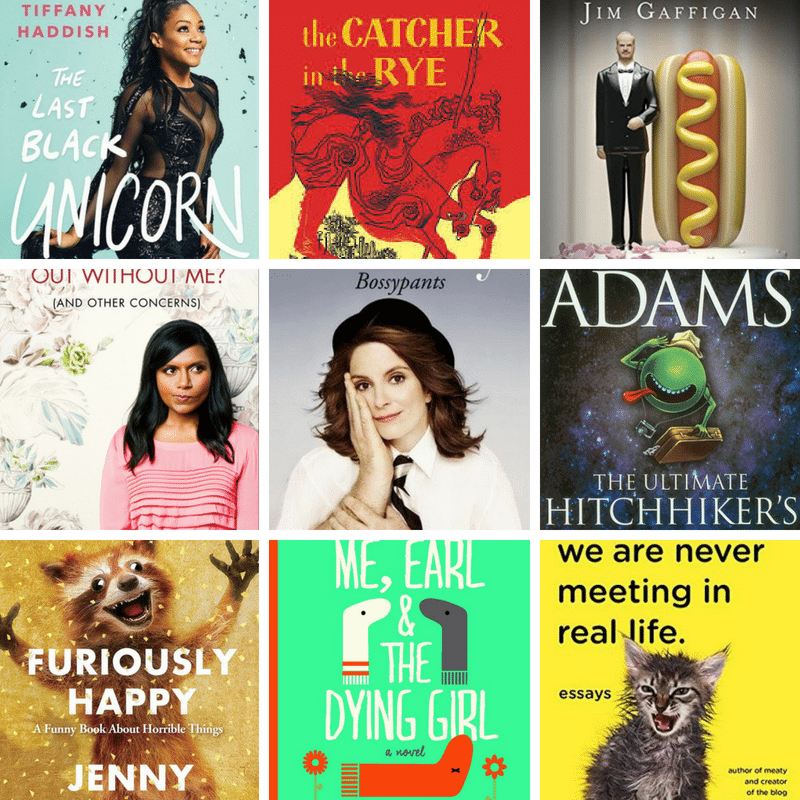 Genuinely funny books are a delight. The best of them, however, are those that can unexpectedly snatch a chuckle out of you, turn you inner LOL response into a full-blown laugh and make you go “OMG! How did they come up with that?!”

Luckily for all of us comedy junkies out there, there are some people out there who lived the most peculiar lives and gladly agreed to share their details with the public, some others who can look at the most mundane real-life events through the lens of comedy and some others who are witty enough to come up with the quirkiest characters and funniest quotes.

These people are now best-selling authors who are knocking the socks off millions of people, including us here at Top 5, and we can’t wait until they work their magic on you, too.

Here are the side-splittingly funny books you should absolutely add to your reading list:

David Sedaris is back again with his brutal honesty. If you’re familiar with dark comedy, you’ll be delighted by the never-hold-back attitude of David Sedaris.

He quickly sets the tone at the beginning of his book when he frankly shares that the only “perk”of reaching middle age is acquiring a guest room. In his own bittersweet and uproaring writing style, Sedaris recounts bittersweet family memories and lashes at politicians, with the refreshingly brutal and hilarious honesty we all need in our life.

Felicia Day’s upbringing and career are peculiar, to say the least. Being homeschooled until college (to which her mom drove her every day), she quickly turned to the web to forge friendships with like-minded people.

After graduating as a valedictorian with a math degree, she headed to Hollywood for an acting career. However, she took matters into her own hands and was one of the first people creating their web series, which earned her her internet fame.

With a journey this odd, one can predict that this actress, gamer, singer, writer and web series creator got herself into the craziest and most bizarre situations. And we love every bit of it!

15.) Is Everyone Hanging Out Without Me? (And Other Concerns) – Mindy Kaling

Mindy is freakishly relatable. Her candor will make you want to have her in your close BFF circle. This autobiography tale is nothing short of hilarious.

She frankly speaks about the bully that haunted her teenage years, the exact level of fame she wants to reach and behind-the-scenes anecdotes from The Office days.

14.) Thinking About It Only Makes It Worse – David Mitchell

Ever asked yourself why some things are the way they are? Well, David Mitchell is constantly asking himself questions—and answering them.

If you want to hear the strong opinions of a hilarious comedian about film sequels, Downton Abbey, Ryanair or phone etiquette, then you absolutely need to read this funny book ASAP.

Being a foster kid in South Central Los Angeles, Tiffany Haddish quickly learned to look out for herself and pave her own path to success. Her superpower? An edgy sense of humor and raw energy that made her the “energy producer” at bar mitzvahs, Girls Trip star, renowned comedian and an acclaimed author with her book The Last Unicorn Standing.

This book is more than just a hysterical autobiography, it’s also a bittersweet tale of how a woman single-handedly and fiercely beat all odds to reach her dreams. Inspiring, uplifting, funny: This book has it all.

I’m personally mad at myself for discovering Bo Burnham so late. This young lad is a real treasure. If you’re a fan of poetry, you will be delighted at how Bo casually breaks the rules and yet can compose beautiful verses.

The then-22-year-old questions why poets always talk about ocean waves instead of grandmas’ farts or weird words like “carpet” or “folklore.” His light humor is brilliantly enjoyable.

When a mom with a severe case of social anxiety is obliged to take her daughter on a trip to Antarctica (as a result of a promise she made to her straight-A daughter), life starts to dwindle. Overwhelmed with pressure, she disappears, leaving Bee, her daughter, alone.

Thus begins an investigation to find “the fugitive,” where Bee amasses correspondence and emails and connects the dots. This heartwarming novel about a mother-daughter relationship and genius is heart-wrenching and yet extremely funny to read. That’s a mix that’s not easy to master.

Me Talk Pretty One Day may be the most famous book by David Sedaris to date. The powerful one-liners and unexpected turns of events will make you want to devour this book in one sitting.

From his father’s food hoarding addiction to his France exile with his boyfriend Hugh, a guy who bakes apple pies to country music, Sedaris’ autobiography tale is funny, insightful and incredibly tender.

9.) Hyperbole and a Half: Unfortunate Situations, Flawed Coping Mechanisms, Mayhem, and Other Things That Happened – Allie Borsh

If you’re wondering what’s so great about this book, we strongly advise you to visit Allie Brosh’s blog as a starting point. This internet sensation has been acclaimed as a blogger and celebrated as an author, and we simply can’t get enough of her.

Her unique take on depression, underwhelming everyday adventures and wild thoughts make her a lovable and relatable character. By the end of the book, we all just want to hug her.

8) Bitter Is the New Black: Confessions of a Condescending, Egomaniacal, Self-Centered Smartass, Or, Why You Should Never Carry a Prada Bag to the Unemployment Office – Jen Lancaster

What can you expect from a title this long and graphic? A blatantly honest book about the tribulations of a woman who saw her life dwindle after getting fired.

Jen is vocal about her opinions, to say the least, and it’s hilarious. Her snarky attitude and malicious remarks make it hard for others to feel sorry for her. However, they make for a great laugh!

7.) We Are Never Meeting In Real Life – Samantha Irby

Samantha fires off at the very start of her book with her hilarious bachelorette application. We could sense right off the bat that it was only gonna get better, and we were right.

This 35ish-year-old woman “could pass for forty-seven to fifty-two, easily; sixty-something, if she stays up all night.” She can also narrate unflattering bits of her life without filtering out any detail, and this is the kind of blinding authenticity that we love.

Tina Fey, enough said. This woman rocked the comedy world on many occasions and shook the status quo with Bossypants.

From her days as a nerdy kid and one-sided college romance to becoming one of the hottest shots of the comedy industry, Tina Fey is a real entertainer, from the first page to the last.

Comedy and food: Name a more iconic duo. To say the least, Jim Gaffigan is extremely opinionated about his food and the culinary world.

Jim orders his steak online because he doesn’t want “steak shopping to cut into his steak “eating time.” Yep, he’s that dedicated.

J.D. Salinger knows how the teenage mind works, and he was brave enough to show it to the world, to our greatest pleasure.

From the first sentence, the reader is taken aback by the brash attitude of the main protagonist, Holden Caulfield, 17 year old. And yet, you will find yourself keeping on reading, because Salinger found the perfect recipe to hook his readers: a relatable character, an upbeat story and an uncensored reality.

3.) Me, Earl and the Dying Girl – Jesse Andrews

This is a funny book you probably have heard about more than once, partly because it was turned into an award-winning movie on 2015.

Greg had been living his best life at high school, not by being the most popular guy,but by being the chameleon who can blend with any group. All was good until his mom forced him to rekindle with Rachel, his childhood friend who’s suffering from leukemia. Is it an awe-inspiring tale that pushes people to appreciate their lives more? No. But it’s a book that’s refreshingly honest about three teenagers approaching life and death in their own unique way, and it’s hilarious.

2.) The Ultimate Hitchhiker’s Guide to the Galaxy – Douglas Adam

Can we even begin to talk about funny books without listing The Ultimate Hitchhiker’s Guide to the Galaxy? Of course not! This timeless piece of art started as a radio comedy broadcast on BBC Radio 4 in 1978 and quickly became an “international multimedia phenomenon.”

And for a reason: imagine starting your day with your house about to get demolished, and ending it with learning that your best friend is, in fact, an alien with knowledge about the apocalypse. We don’t wanna say any more than that so as not to ruin the book for you, but the sheer absurdity of the events and the brilliant storytelling set this book on another level.

Jenny Lawson will make you laugh then cry the page after, without a warning. And you’ll love it. This gifted author is a worrier and a warrior. Her daily battle against mental illness will have you in stitches and in tears.

Jenny Lawson decided that she will be happy against all odds, or she will die trying to do so, and we hope she wins her bet.