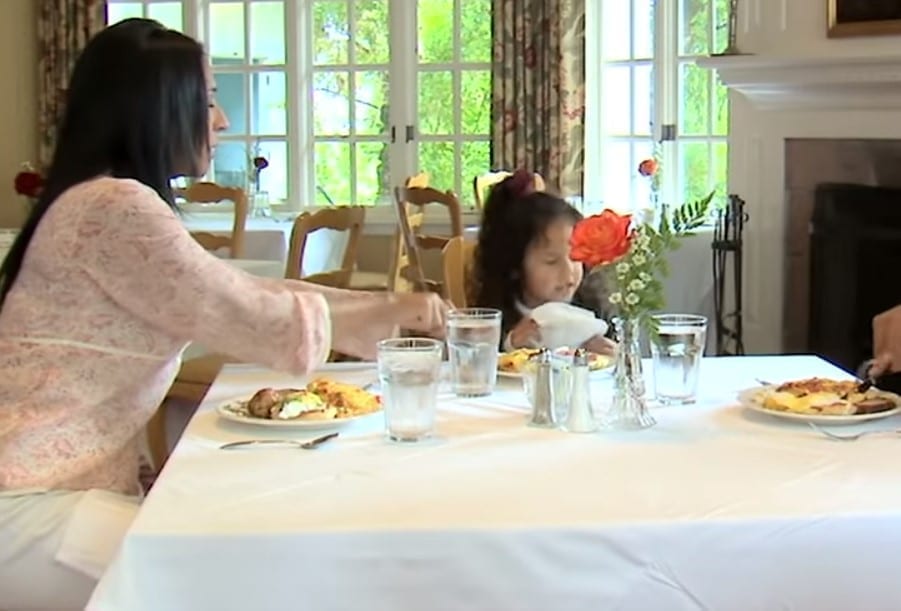 Noticing his young daughter’s strange behavior, he began to grow deeply suspicious. When she slid off her chair and stood up unsteadily, he knew. He grabbed the cup of juice from her hand and took a long sip.

Suddenly, his chest was burning. Grabbing his phone, he frantically dialed 911. He knew what they had done. And there would be consequences.

The Smith family from Georgia was going about a normal Sunday afternoon. Alexis, Tim, and their young daughter, Aaliyah, had decided to pop into an eatery just outside of Atlanta in Vinings, GA., for lunch after their church service.

Little did they know, they were about to spend the rest of the day in a hospital ward.

After Tim and Alexis had finished their lunch, their daughter began to act extremely strangely.

Although Alexis understood that making mistakes is part of being human, this mistake that had been made with their daughter was unforgivable. It wouldn’t be long before the consequences would become apparent. Soon, she would be demanding answers. Where was the manager?

The Smiths had sat down at a table at the popular restaurant in Vinings and had ordered lunch for themselves, as well as a cup of apple juice for 18-month-old Aaliyah. It was a normal-enough request – after all, the family had been patrons of the restaurant for years.

Little did they know, things were about to take a frightening turn.

Aaliyah sipped on her juice as they all enjoyed their Sunday meal. They hadn’t noticed anything out of the ordinary. At first, “everything was normal,” Aaliyah’s mom said tearfully.

It was only when their plates had been cleared and they were about to leave when they noticed that something was very wrong with little Aaliyah.

They watched as their daughter’s eyes became unfocused. They tried to ask her what was wrong, but she was acting extremely withdrawn. At first, they didn’t think too much of it. Then, she got off her chair and began to stagger.

It was at this point that Alexis knew that something wasn’t right. Was she suddenly sick? Then, Tim grabbed her cup of juice.

“We were about to leave, my spouse got the juice, it was in the kid’s cup, he tasted it, and his chest started burning,” Alexis explained.

When she saw her husband’s reaction, she took the cup of apple juice from him and tasted it herself. The taste was familiar, but she couldn’t quite place it. After all, she was expecting a sip of apple juice.

When Alexis sipped the juice, she also felt the distinctive burning sensation in her chest. She couldn’t believe it, but it had happened somehow. Then, she knew without a doubt what it was. Their daughter had been served something else entirely.

Alexis screamed for the manager while Tim called 911. How had this been allowed to happen?

The manager of the restaurant walked out the back, alarmed to see two furious parents and a scene unfolding. Alexis thrust her daughter’s cup of juice in his face and asked him to explain.

Confused, he took a sniff. That definitely wasn’t apple juice. But then, what was it? And how had it gotten into the little girl’s cup?

The manager on duty confirmed their worst fears – that wasn’t apple juice in the cup. It was alcohol. He discarded the drink immediately. Then, he filed an incident report and reimbursed them for their meal – as if that could undo the damage now.

Meanwhile, Aaliyah was deteriorating quickly. Would the ambulance get there in time?

The manager spoke to the bartender, and after inspecting their supplies they concluded that a container marked ‘apple juice’ had been mislabelled. Alexis, furious and upset, couldn’t hold back. How could they have made such blunder?

Aaliyah was only 18 months old, and they’d given her alcohol! Her emotions flew between anxiety and fury, then she broke down.

Alexis began to cry. She felt like she had been doing everything she could to ensure that her baby was healthy and happy, and now this.

“I started crying at the restaurant,” Alexis recalled. “As a mom, it was very emotional. Alcohol is something serious. You have to be 21 as an adult to drink it.” But would Aaliyah be okay?

Aaliyah’s “juice” had been discarded, but she had already consumed more than was safe. By the time the ambulance arrived “She was a little off-balance,” Alexis recalled. They checked her vitals and rushed her off to a doctor.

After waiting for two terrifying hours, the doctor saw her. And when he measured her blood-alcohol levels, the results spoke for themselves.

The doctor confirmed that Aaliyah had consumed around three teaspoons of alcohol.

Although this may seem like a small amount, the tiny tot had a blood alcohol level of around 0.065 – just under the legal limit for adults. Even worse, that was two hours after she had consumed it — the alcohol had had time to dissipate. Alexis was horrified.

A Warning For Other Parents

Thankfully, Aaliyah made a full recovery from her ordeal. However, her parents want to warn other parents out there to always check their children’s drinks.

Alexis also revealed that the restaurant had offered to transfer the “juice” to Aaliyah’s sippy cup before they realized something was wrong, but thankfully, she had declined. What would have happened then?

“She would have been sipping on alcohol all day and possibly passed away,” Alexis said. “I’m just lucky that my daughter did not consume the whole cup because she probably would not be here now.”

While mistakes do happen, it’s disturbing that this isn’t the first time something like this has happened at a restaurant.

In 2011, a Michigan toddler was hospitalized after the 15-month-old was mistakenly served alcohol at an Applebee’s restaurant. In a similar mislabeling incident, the child was served alcoholic margarita mix instead of juice.

“He was saying ‘hi’ and ‘bye’ to the walls,” Taylor said. “He laid his head down like he was sleepy, then woke up and got really hyper.” That’s when she began to suspect that her child had been served alcohol.

She immediately drove him to the hospital, where they found his blood-alcohol level to be 0.10. “They said if he had drank that whole cup he would have passed away,” the tearful mom said. And there was also an incident at a Texas Roadhouse in 2015.

A two-year-old in Asheville, North Carolina was accidentally served sangria at a Texas Roadhouse in 2015. “She was staggering and she was kissing everything,” said the child’s mother, Tiffany Gilliam.

“I had to rub her belly the whole night and she slept with us because I was scared that she might not wake up. That she’d choke on her throw up and not wake up. It was the most horrible feeling ever.” So, what can we do to prevent this from happening again?

“I believe that this restaurant needs to be investigated,” one mom said. “My child’s drink should come in a kid’s cup. And parents should check the cups from now on.” But what was the restaurant’s response?

“Although it was an isolated incident, we will take immediate action to ensure our staff receives retraining in alcohol service through the Servsafe alcohol program.” But, in a preschool in Hawaii, the toddlers were served something much worse than alcohol.

It seemed like an ordinary day at Kilohana United Methodist Church Preschool in Honalulu, Hawaii.

A classroom assistant was preparing morning snacks for a group of children between the ages of 4 and 5 while the classroom teacher rounded up the young students. They were served crackers and apple juice – their usual morning snack. But something had gone terribly wrong.

The assistent had seen the bottle of yellow liquid on top of the clean-up cart, so she brought it into the classroom and began filling up the childrens’ cups one by one.

That’s when the classroom teacher, who had been tending to the students, noticed that the “apple juice” in the kids’ cups had a very strange smell.

The classroom teacher immediately stopped the children from drinking the “apple juice” and called 911. Emergency Medical Services arrived on the scene within minutes and evaluated the three children who had already taken a few sips from their cups.

After checking their vitals, the children were given the all-clear, but things could have turned out very differently if the teacher hadn’t noticed what they were actually drinking.

The original inspection report said that the liquid had been in its original container and had been properly labeled, but what had been served to the children was Pine-Sol – a cleaning agent that contains chemicals including toulene.

Consuming the cleaning liquid could have had dangerous or even fatal consequences. The parents of the preschoolers were in utter disbelief.

“I think it’s extremely terrifying. It’s very, very scary, but it’s hard for me or any of the people that I’ve spoken to to understand how it happened in the first place,” Turina Lovelin, a parent of one of the children at the school, said.

The school was inspected, and the assistent who had made the dangerous mistake was fired on the spot.