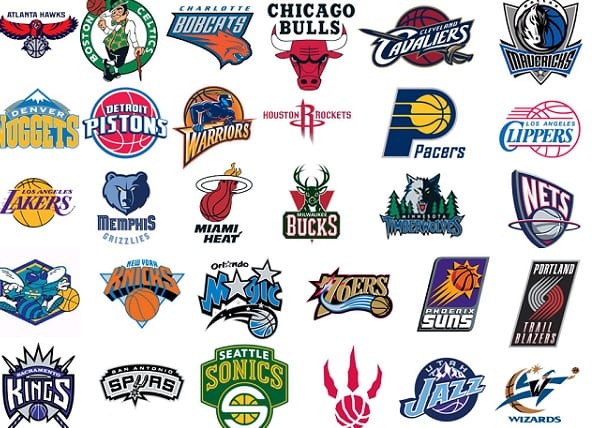 Since the NBA’s inception, it’s been a renegade league, constantly tweaking rules and the way the game works. In many ways, basketball has evolved more than any other professional sport in its short history, while also expanding and moving teams seemingly every couple of seasons.

With this constant change, the team logos have had to change as well. Not every logo is a successful one, as sometimes the team’s marketing department goes a little too far (or not far enough); however, when a team is able to integrate excellent design with a representation of their city or mascot, and a great color scheme, it can elevate a logo to truly classic status. Luckily, in the NBA’s history, there have been numerous iconic logos.

Here are the Top 5 throwback NBA logos we want to make a comeback. If you’re an NBA fan, just head to the tattoo shop with this list handy, and you’ll be good to go.

A white hat on a blue M on a green basketball. If you’re going to represent the Lone Star state, and Dallas in particular, why not incorporate the cowboy hat?

A relic of the pre-Mark Cuban Mavericks, this logo is more of a homage to Mavs’ founder Don Carter, who famously rocked a cowboy hat from courtside. This was way before Dirk, before Steve Nash, before an NBA championship. The cowboy-hatted M represented the Mavericks like a television western, not like an angry horse. Just looking at the logo now makes me want to grow a mustache, corral my steed and head off into the sunset. It’s high noon somewhere.

Wanna stock up on some Mavs throwback NBA logo gear?

A true relic of the ’90s, the Vancouver Grizzlies logo is the perfect mix of ferocity, cartoonish-ness, and over-the-top design. The slash marks on the wording give it a Jurassic Park quality.

It’s a logo that you sort of feared, but mostly laughed at. We’re talking about a team called the “Grizzlies,” after all. After the 2000-2001 season, the Grizz moved to Memphis, leaving Toronto as the only Canadian NBA team. The team kept this logo for a few seasons, but it didn’t have quite the same bite as it did in Vancouver. Still, this logo remains a very popular snapback hat option.

Wanna stock up on some Vancouver Grizzlies throwback gear?

Led by the dynamic duo of Shawn Kemp and Gary Payton in the ’90s, the Sonics matched their on-court success with a classic, beautiful logo showing off the Emerald City’s gorgeous skyline. The team later “updated” the logo, emphasizing the more phallic shape of the Space Needle before eventually relocating and becoming the Thunder. Here’s hoping that, if Seattle gets a team again, they bring back this iconic logo.

Wanna stock up on some throwback Seattle Supersonics gear?

Nothing says ’80s NBA like this logo from the Denver Nuggets. From the multi-colored Tetris-like tile mosaic to the font that’s reminiscent of Tron, this logo comes from an era where teams weren’t afraid to be unique. Unfortunately, this epic logo and matching rainbow jerseys represent some truly awful Nuggets teams (one sportswriter from this period called them the “Enver Nuggets – No D”), but at least they looked good.

It doesn’t get more retro than this logo — the type of thing you’d expect to see in Ready Player One. Given Colorado’s current plant laws, I’m not surprised to see fans clamoring to bring this logo back, with 3D and light-up variants making the logo even more psychedelic. Bring it back, Denver. At least for April 20.

Okay, so this isn’t technically a throwback NBA logo, because it’s never changed throughout the team’s entire history, but there is no logo more iconic than the Chicago Bull. Simple, angry, and straight to the point, this logo has seen only slight variations for alternate jerseys and exclusive merchandise, but has remained the steadfast symbol of the Chicago franchise since its inception.

During the Michael Jordan era, back when everybody was a Bulls fan, this logo went on to symbolize the NBA and basketball in general. You couldn’t go anywhere without seeing it. Ironically, the designer, Dean Wessel, made this logo as a favor to Bulls founder Dick Klein and was never paid for creating it. 50 years later, with the logo still in use, I bet Mr. Wessel’s family members wish they were at least getting some residuals.

Every other NBA team has altered its logo at least once, other franchises have moved, and team names have changed. This Chicago Bulls logo, however, lives on. Seeing it in the middle of the United Center floor immediately brings back memories of the greatest player of all time. If the current Bulls can rebuild into a contender, maybe it’ll once again strike the same level of fear in its opponents.

What’s your favorite throwback NBA logo? Let us know in the comments below! Can’t get enough of sports logo-emblazoned goods? Check out this roundup of NBA NIKE statement jerseys perfect for sporting team pride.