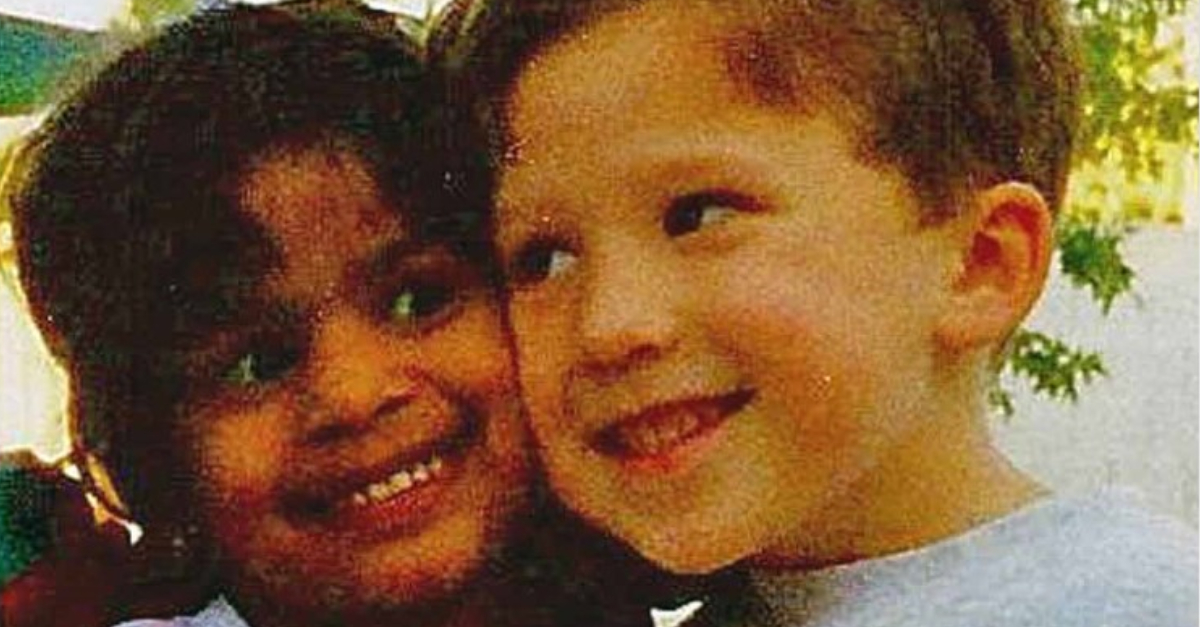 He Made A Vow

He had made a vow so many years ago, but now that the day had finally come, he was shaking.

While some don’t believe in love at first sight, he knew exactly who he was going to marry from a very young age. He loved her that day in class, and everyone had laughed at him. Little did they all know, he would keep his word.

Love works in mysterious ways, and it can be both magical and beautiful. Everyone deserves to fall in love once in their lives. Matt Grodsky met his true love when he was just three years old.

Her name was Laura Scheel, and Matt always did everything he could to try and impress her. They were best friends, but everyone around them could see that they were so much more than that.

Matt and Laura went to the same preschool in Phoenix, Arizona. It wasn’t long before the tiny tots were inseparable. By the time they were four, they were spending all their time together.

Nobody had ever seen anything like it – the pair had a unique and special bond right from the beginning. Unfortunately, their parents knew it couldn’t last. And sadly, they were right.

The two little lovebirds spent long, happy days on the playground. Laura loved Matt’s goofball antics – they were always laughing and exploring together.

The teachers and parents who saw their friendship develop thought they were adorable but didn’t think it would extend into the future. To everyone’s surprise, they were both right and wrong.

Peas In A Pod

Laura and Matt were like two peas in a pod. They didn’t just spend their time together at school, they planned their weekends ahead of time to spend even more time together.

They created so many happy memories together – Laura taught Matt how to use the swing and how to eat string cheese the “right” way, and he entertained her by re-enacting scenes from their favorite movie, The Lion King. But, one day, Matt did something so surprising that the whole classroom would mock him for it.

That fateful day, Matt couldn’t contain himself. He was only four years old at the time, but he had to tell the whole world how he felt. He stood up in front of the entire class and professed his love for Laura.

“Just you wait!” he exclaimed as the whole class laughed at him. He vowed to marry Laura one day. Of course, nobody took him seriously. But, as the lovebirds grew up, their journeys took them on separate roads.

When it was time for Laura and Matt to start kindergarten, they ended up going to different schools.

Although they tried to remain good friends throughout the years, they inevitably drifted apart. They were now growing up and living separate lives. By the time they both started elementary school, the two best friends had become complete strangers. Then, something changed.

As Laura and Matt grew up, made new friends, and had new experiences, it was easy for them to forget about their past. For a moment, it seemed like the pair had grown up and moved on.

Seven years passed. Then, one day, Laura saw something that made all those old feelings come rushing back.

Matt and Laura were now attending high school, and they were further apart than ever. Until the day when Laura saw something that made her feel strange.

It was the fall of her freshman year. Laura was scrolling through her close friends’ phone when she saw Matt’s name come up in her contact list. Her reaction to seeing her old friend’s name came out of the blue and completely surprised her.

Just the sight of Matt’s name had made Laura flush, and her friend immediately asked her what was going on.

Laura told her friend about her childhood sweetheart Matt, but as she did this, her friend already had a plan up her sleeve. Laura’s friend was determined to get these preschool sweethearts back together. But would her plan work?

Laura’s friend wanted to set her up with Matt again, but Laura had a different idea – “I was a freshman in high school, so I was like, ‘I don’t think so!’” Laura told People.

Despite having shown no interest in contacting Matt again, her friend gave Matt her number anyway. Laura was very nervous about the whole situation, but then Matt surprised her in such an incredible way that all her nerves seemed to have just flown away.

Not long after, Laura received a text from Matt, and they both agreed to meet up. Both of them had no idea what to expect as so many years had passed, but clearly, the chemistry was still there.

They met up at a movie theatre and hit it off right away, it felt like they had never stopped being friends, or sweethearts for that matter. After just two weeks from the initial text from Matt, these two were officially dating. Even so, these two weren’t in the clear. They had a lot more to overcome.

Matt and Laura spent all the time they could together and saw each other weekly. But soon, it was time for both to go on to college and they both knew how difficult this was going to be.

“Right after we graduated from high school, we were pretty hesitant,” said Laura in an interview with People. “We were like, ‘Do we stay together? Do we try to make it work.’”

Once again, the paths of these two were destined to split, but they knew they had to fight for what they wanted, and they did. Laura enrolled at Northern Arizona University, and Matt moved to Chicago to attend Columbia College.

Even though these two were miles apart, they ensured nothing would separate them again as it had after preschool. Little did Laura know, a vow Matt once made in a packed classroom was as real as it was the first day he announced it.

Where It All Began

Senior year of College came for these two lovebirds. Matt wanted to surprise Laura in the most incredible way he thought possible. “I convinced Laura that we were going to a picnic at the preschool. We had just finished up our junior year of college, so I framed it as a nice relaxing date,” Matt told Huffington Post.

When they arrived at the surprise destination, Matt got down on one knee and proposed to Laura. “YES” Laura exclaimed, “I was like, ‘Oh my gosh, is this happening?’. But indeed it was, and Matt had everything sweetly planned. “I proposed to her at the place it all began … our preschool classroom.”

Love From The Beginning

“When you like someone, you just kind of stand up and say it,” Matt said in an interview. He had known from the very beginning he wanted to spend the rest of his life with Laura.

As soon as she saw the ring, she couldn’t hold back her emotion. ‘This is gorgeous. I’m so happy with it.’ I had no idea,” she exclaimed. Little did these two know, they were about to make headlines.

In December 2016, Matt and Laura tied the knot after almost 20 years of having vowed they would.

Matt’s uncle officiated the wedding and went on to describe their relationship as: “For most kids in preschool, it’s about finding your snacks and your sleeping mats, but for them, it was about finding their soulmates.” But still, the couple would wake up one morning and find that their faces were all over social media.

Soon after these two became official husband and wife, Laura posted the story of how they met on social media. It became an instant hit and got caught by a social media account called “The Way We Met” which recounts amazing stories of how couples met.

The post became an instant hit, and the caption started off with Matt explaining how these lovebirds began: “I was enamored with Laura as a child, and I still am to this day,” he declared. This declaration of love pulled more than a couple of heartstrings but they never expected so much attention.