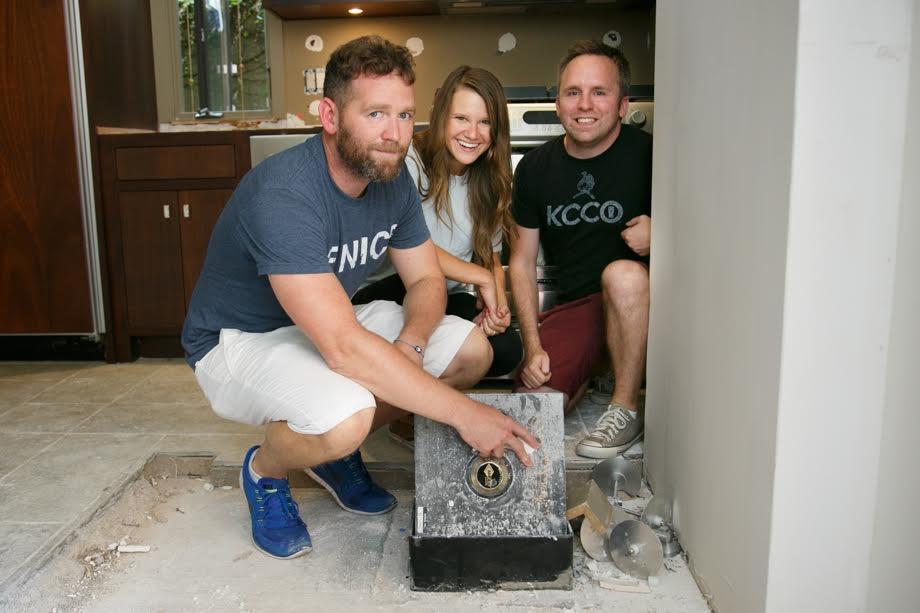 A fascinating story made its rounds on the internet recently. It deals with a couple, Eddie and Angie, who made an amazing discovery. While renovating their home, they made a once-in-a-lifetime discovery.

The couple couldn’t believe the amazing discovery they made and decided to share the story online: “Where to start… we moved into our fixer-upper home two years ago and we’re finally getting around to the kitchen renovation. Eddie is DIY (enough) and saving us some money. It’s cute.”

“During the demolition, we found this safe in the floor – the safe revealed itself when we tore down the kitchen island. To my knowledge, our home has had 6 previous owners – A hunch the safe didn’t belong to the last owners who seemed to like cats and smoking.”

“When we first moved in we found a safe code in the back of a medicine cabinet but never found a safe. Still, I saved the little code just in case. The safe looks like it’s about 10-20 years old. After a half dozen attempts it actually worked!”

The couple couldn’t believe some of the other things they discovered inside the safe. There was a bottle of James E. Pepper bourbon in the safe. According to a quick internet search, the bottle, which had a tax stamp from 1960, was also quite rare.

Other items in the box included “ A Guide for the Perplexed” by E.F. Schumacher. Published in 1977. A photo, a map of the state, and several other things that seemed to allude to some hidden treasure map including an old bingo card, highlighted passages in the book and more.

The couple claimed that while they were keeping the bottle of bourbon, they were still trying to locate the owner of the money. Naturally, many people wanted to know more about the case and find out what happened after the post was made.

Finally, after much wondering, the case has picked up some new steam thanks to some information that recently came to light. However, while the information answers all the questions it wasn’t quite the answers people were looking for.

Brothers John and Leo Resig have had an unusual hobby. They have found notoriety by perpetrating several hoaxes such as the famous “Donald Trump Tip Hoax”, and “HOPA Hoax: Girl Quits Her Job on Whiteboard” hoaxes.

The pair’s hoaxes had been so successful in the past that they had garnered national attention from the media, who also made the mistake of saying that the two would never again be able to pull off such a hoax.

There happened to be some construction happening at Johns home when an old wall safe was being installed in the floor of his kitchen when he suddenly saw an opportunity. That’s when he called in his friends Annie Elias, and Chris Moeser to help him.

John has revealed all the tricks they used to pull off such a convincing hoax, and it was deceptively easy. Their plan came together perfectly and fooled the world yet again but this time he admitted it and has shared the secrets.

In the post, John explains: “My executive assistant, Annie Elias annoyed bank tellers across Austin for a few days looking for old $100 bills and both $2 and $5 Red Seal Notes. She did an amazing job. Behind the $100’s were just a lot of old $1 bills. Oldest trick in the book, I know, but still gets the job done.”

John goes on by stating: “James E. Pepper bourbon fell on hard times and went out of business in 1958. My Uncle, Ed Logan, had purchased a bottle of the ’54 in the early 70’s. He gave it to me last year as a gift. Pepper’s history is fascinating. This is one of the last remaining bottles of that era in existence.”

“If you’re looking for rare oddities and antiques, I recommend Uncommon Objects on South Congress. We found the old photos of Vincent and the estate with that tree, as well as the flash cards and A Guide for the Perplexed at Uncommon Objects,” John explains as he shares another secret.