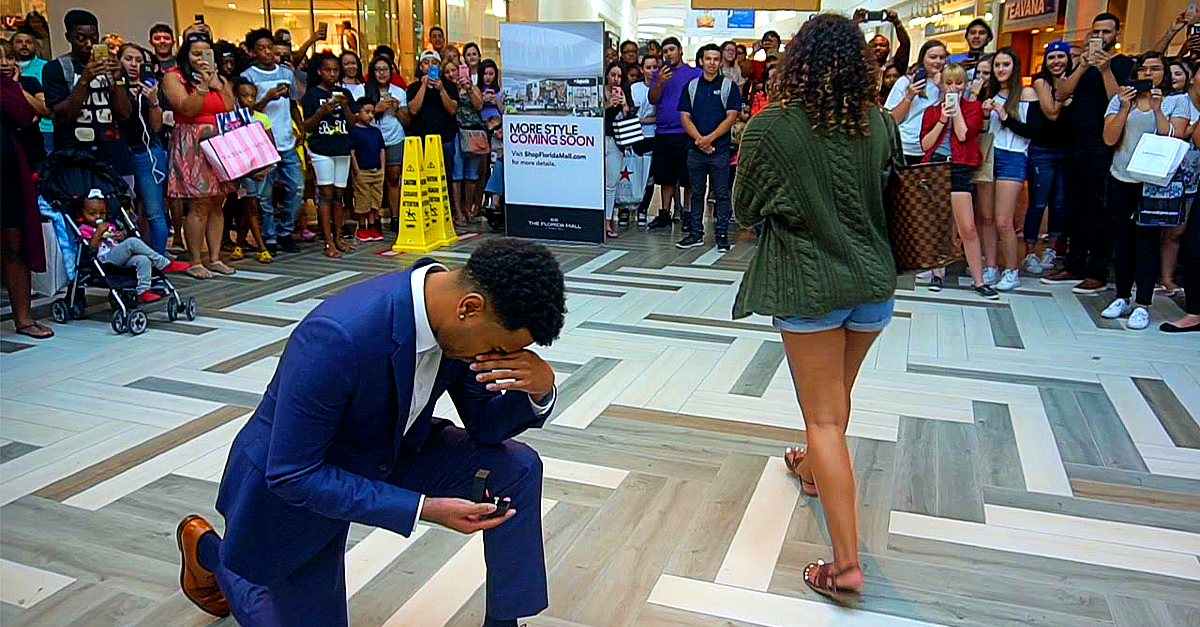 When a couple gets engaged, it’s supposed to be one of the most romantic and memorable times of their lives. However, not all proposals lead to a happy ever after.

People don’t typically talk about their own experience of a rejected proposal but when they do, it’s so much worse than we thought. Here are some of the worst proposal stories of all time, courtesy of Reddit.

I witnessed a proposal that was shot down in a blaze of awkwardness. I was at the Cheesecake Factory sitting at a table where one side is a booth and one is a chair. The tables are super close together. The guy at the table next to me got down on a knee between our tables (only, he barely fit and kept bumping my table).

“She was horrified he was asking and said no. They hadn’t even eaten yet, so they had the rest of their meal while bickering about the proposal. He kept yell-asking her what he should do with the ring now. Truly the most awkward meal of my life sitting less than a foot from that. Ouch!

The Show Must Go On?

I did watch one once, and it was awful. Guy just won an amateur bodybuilding contest, and his partner came up onstage with him. He immediately dropped to one knee and asked her to marry him.

“She didn’t say a word and started to shake her head no, and he started to weep onstage while still holding the microphone.

“The guy I had to shoot down was raised very religiously, and though he didn’t hold those views, he seemed to have a blind spot to the difference between being in love and being ready to marry. He expected because I loved him, that I would want to marry.

“We were also both pretty young. It’s sad because he was logical and empathetic in so many ways, but in that way, he was just a Bible page. He was stunned and confused. Sad.”

“My dad was told no the first, second, third, fourth, fifth, and sixth time”, said another Reddit user. Wow, that shows a lot of determination.

So we’re assuming the seventh time was the lucky charm? We wonder what he did differently to result in his desired outcome. Whatever it was, we’re glad it worked out. Unlike this next Reddit user.

“She told me that she was so desperate to get married, she would marry anyone who asked, as long as he wasn’t the biggest loser on the entire planet. I learned something about myself that day.”

“A guy proposed to me a couple of years ago. He was just depressed about the lady he was actually in love with rejecting him.”, declared Reddit user, u/TeaGnomes.

There’s nothing worse than a man desperately trying to fill the void of his unrequited love by proposing to someone else. Obviously, she said no.

No Words For This One

“A buddy of mine from college just got rejected while proposing. She was very, VERY adamant about getting married, having babies, looking at rings, the whole thing. Wanted to be a housewife and stuff because she hated working as a teacher. They even talked about it, and she’d said stuff like, ‘I’d be prepared to say yes as soon as you ask.’ Pretty up the middle, right?

“Well, he proposed and she said she wasn’t ready for the settled life. Turns out, she only wanted to be together to split rent.”

“I proposed and got rejected. I thought by helping her and being available for her 24/7 and pretty much living for her, I would win her over. It took me years to realize that’s not how the world works.”

Well, at least he realized it eventually. That’s better than most can say!

I thought she’d say yes because she kept hinting at it, showing me pictures of rings she liked, etc. When I actually proposed, she said, ‘You’re too nice a guy for me.’

“We were at a work party. We hadn’t been dating long, but I knew. Anyway, at some point, I grabbed a microphone and asked her. She said, ‘Can we talk about this in private?’”.

We don’t know where to start with this one. What on earth made this guy think that was ever a good idea? Hopefully, he won’t try that one again!

“My fiancé proposed a few months into dating, and I didn’t know if he was just really baked or serious. So I said awkwardly, ‘I’m not sure if this is real, but it’s way too soon for that.’ Poor dude was actually asking.”

We’re not sure if she continued to date this guy, we’re hoping she gave him some space!

This one’s a long one so get ready! “A more gay, funnier, and subverted side to this story, but I did a sort of nontraditional proposal to an ex-girlfriend of mine when I was in my mid-20s because she loved surprises and I REALLY wanted to surprise her with this.

“She got all flustered and scared because her family was all homophobic conservatives, and she never did end up telling them that she was dating a girl (I have a pretty masculine name).”, she continued…

“She was worried about me because she didn’t want me to get insulted or hurt by her family.

“It ended with her trying to think up the best hypothetical ways to tell her family that she was ‘marrying a girl’ with the least awful result because she didn’t want to reject me — she really did love the idea of us being married — and with me telling her that if she wasn’t ready to marry because of whatever reason, then she could say no. It ended with us not being engaged that day.”

With all of these rejections, one thing seems to be crystal clear, please, please get to know your partner fully before you propose. It’s important to discuss relationship goals to be on the same page about what you want from each other.

Ironically, all you gotta do is ask. Just ask the smaller questions first!