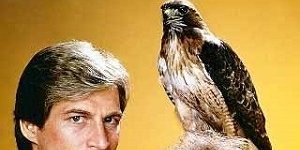 Garbage Pail Kids, gigantic hair, “Weird Al” Yankovic—the ‘80s overflowed with peculiar pop culture, which is probably why television execs believed audiences would flock to watch shows with bizarre premises. Sometimes they were right, such as when they created “Bosom Buddies,” featuring a cross-dressing Tom Hanks, or “Small Wonder,” the sitcom with the robot daughter. And sometimes they got it wrong—weirdly wrong.

Back in the ’80s, the potential of computers seemed limitless, which led to the development of a number of improbable television shows that prominently featured technology. Foreshadowing the unforeseen “age of the geek,” “Automan” featured a nerdy computer programmer who develops a crime-fighting hologram man. Together they aided the police in solving crimes for all of 12 episodes in 1983. Of course, there was a bizarre sidekick. Cursor, who appeared as a floating polyhedron, could defy the laws of physics to generate cars, planes and other useful items out of thin air.

Almost 10 years before the success of “Friends,” Courtney Cox was actually on television with a different set of companions who just so happen to possess superpowers. In 1985, NBC’s “Misfits of Science” starred Cox as a telekinetic teen on zany adventures with a tall guy who can shrink himself; a rock star wannabe who possesses electrical powers; and a kid that needs to be kept in an ice cream truck because of his ability to freeze things. These comic book character ripoffs were thinly drawn and the show was cancelled after 14 episodes.

Just because a kitschy character attracts an audience elsewhere doesn’t mean it deserves a starring role in its own sitcom. But that’s exactly what happened to Max Headroom. Originally created as “The World’s first computer-generated TV host,” the Max Headroom character appeared as a British music veejay, then quickly became a cult classic. In 1987, looking to cash in on the character’s success, ABC created the “Max Headroom” series that cast the titular character as a crusading investigative journalist fighting to take down a dystopian world controlled by television execs. ABC wound up taking Max down halfway through his second season.

Television cops have had to endure all sorts of tagalong characters who purportedly “help” them solve crimes—writers, psychics, meddling kids, even talking cars. None were quite so wacky as 1983’s “Manimal.” In this series, Dr. Jonathan Chase, played by Simon MacCorkindale, had the ability to transform into any animal he desired. He used his uncanny ability to help detective Brooke Mackenzie, played by Melody Anderson, solve crimes as only an animal could. Curiously, the good doctor transformed into a hawk and a black panther in almost every episode, but he did manage to become a few other animals, too. Needless to say, this silly cop drama managed to stay on the air for only eight episodes.

Officially titled simply “Pink Lady,” named after its Japanese female singing duo headliners, this 1980 variety show lasted just five weeks on NBC. Also starring comedian Jeff Altman, the show consisted mainly of Pink Lady performing covers in between sketch comedy bits centered on stilted conversations between the non-English-speaking singers and Jeff, who then offered up ridiculous translations. As if that wasn’t strange enough, each tortured episode ended with all of the players jumping into a hot tub together for some unknown reason.